“With Vision We Lead” 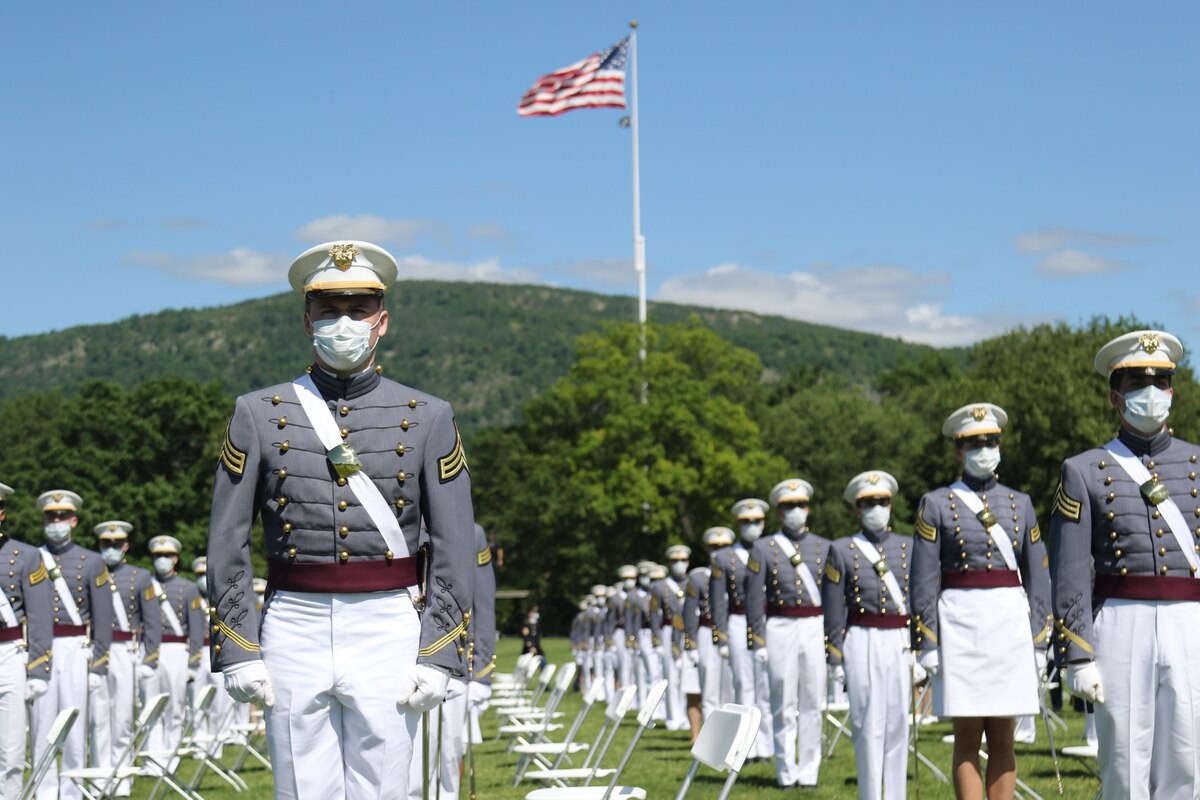 “You exemplify the power of shared national purpose to transcend all differences and achieve true unity. Today, you graduate as one class, and you embody one noble creed: Duty, Honor, Country.” — U.S. President Donald Trump

“With Vision We Lead”

The creed of the U.S. Military Academy of West Point seems more poignant than ever in our most troubled age. The U.S., like the world, has never needed leaders with vision more.

It will take vision, the kind of far-sighted future-gazing that can see past the turbulence of the moment, to move this country- and the global economy with it- into a more unified, prosperous, and secure future.

As if to drive this message home, 1,107 graduates from West Point gathered for commencement this year to face a ceremony unlike any past cadet celebrants have enjoyed.

With the requisite Covid-19 public health guideline of six-feet plus between cadets, with family and friends allowed to tune-in only online, the ceremony little resembled those of previous years.

This was last year: 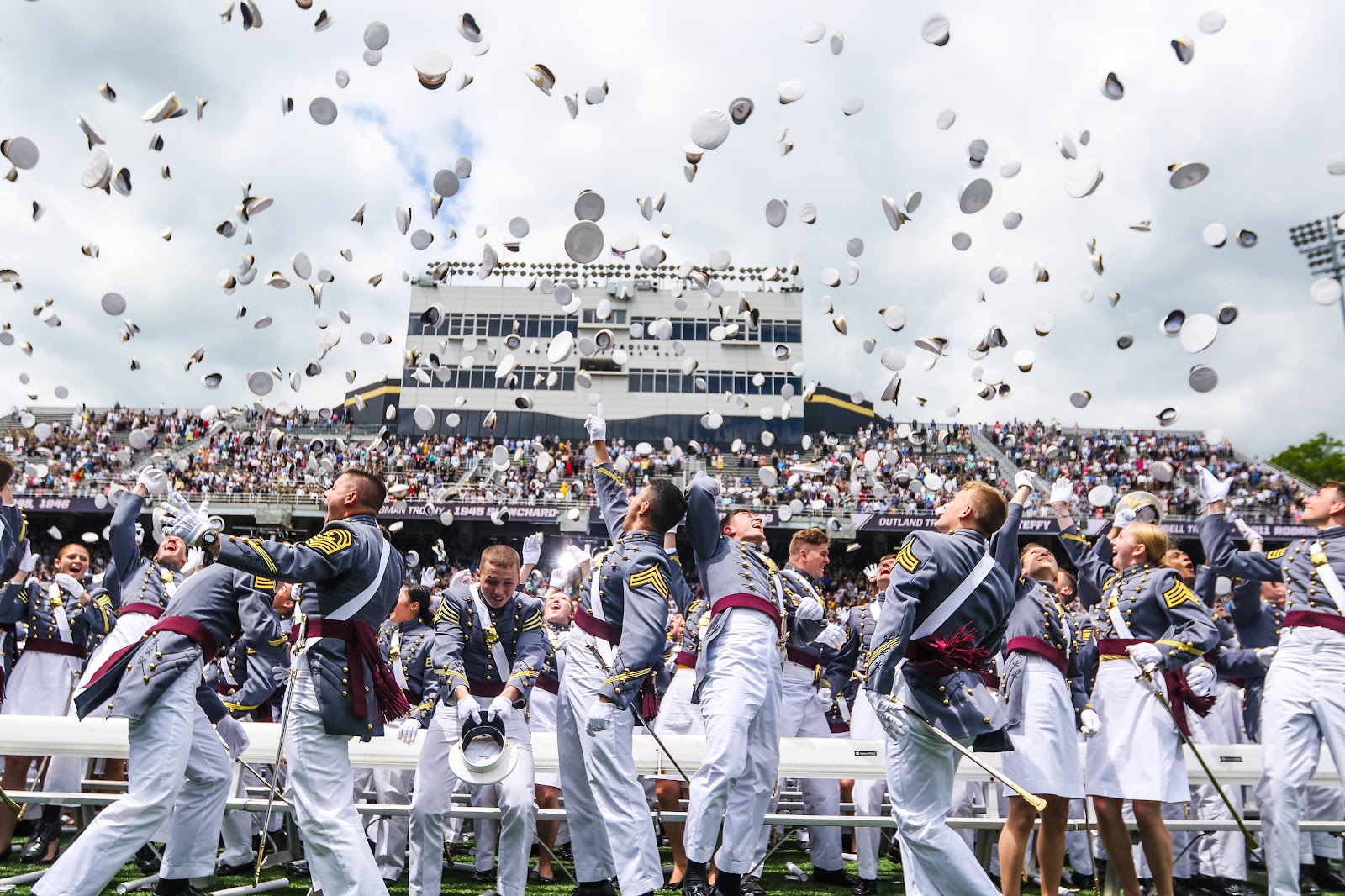 The U.S. Military Academy at West Point held their graduation and commissioning ceremony for the Class of 2019 at Michie Stadium in West Point, N.Y., May 25, 2019. In attendance were commencement speaker Vice President Mike Pence, Secretary of the Army Mark T. Esper and Chief of Staff of the Army Gen. Mark A. Milley. Each year, USMA graduates officers who are leaders of character committed to the values of duty, honor, country. (U.S. Army Photo by Brandon O’Connor)

“They’re seated at about 8-foot intervals across the parade field, so it’s an outdoor ceremony. Once they reach their seats, they will then take their masks off for the rest of the ceremony because they will be practicing social distancing and they’re outside, and they’ve all tested negative,” Lt. Col. Chris Ophardt said of West Point’s plans to keep the graduation ceremony as intact as possible while keeping everyone healthy.

Nor were the graduates to be handed their diploma; instead, they were to render a socially-distant, though appropriate, salute to their Commander and Chief, U.S. President Donald Trump.

Trump, who announced in April his plans to give the West Point commencement address this year, ignored detractors who tried to paint his visit as a self-serving campaign ploy which would risk the lives of new graduates.

“Trump’s reckless decision to gather 1,000 Cadets at West Point for a speech puts our future military leaders at increased risk- all to stroke his own ego. Our troops need stable, consistent leadership during volatile times like these, not a Commander-in-Chief who values his own photo ops and TV ratings over their health and safety.” — Sen. Tammy Duckworth (D-IL)

Though this was his first commencement address at West Point, Trump has spoken in previous years at the Naval Academy in Annapolis, the Air Force Academy in Colorado Springs, and the Coast Guard Academy in Connecticut.

Addressing the class, Trump wasted no time in effusively praising the U.S Military and its contributions- historic and recent.

“The depth and breadth of the U.S. Military’s contributions to our society are an everlasting inspiration to us all. I want to take this opportunity to thank all members of America’s Armed Forces in every branch- active duty, National Guard, and reserve- who stepped forward to help battle the invisible enemy- the new virus that came to our shores from a distant land called China. We will vanquish the virus. We will extinguish this plague.” — U.S. President Donald Trump, commencement address at West Point. June 13, 2020

Trump also thanked military members obliquely for their service in helping quell the recent unrest sparked by the killing of George Floyd by a Minnesota police officer.

“I also want to thank the men and women of our National Guard who respond with precision to so many recent challenges, from hurricanes and natural disasters, to ensuring peace, safety and the constitutional rule of law in our streets. We thank every citizen who wears a uniform in selfless service to our nation.” — U.S. President Donald Trump, commencement address at West Point. June 13, 2020

Trump went on to deliver a message of strong unity, commending the West Point cadets for being a model of diversity and patriotism.

“The members of this class have come from every state in our union. You have come from the farms and cities, from states big and small, and from every race, religion, color and creed. But when you entered these grounds, you became part of one team, one family, proudly serving one great American nation. You became brothers and sisters pledging allegiance to the same timeless principles, joined together in a common mission to protect our country, to defend our people, and to carry on the traditions of freedom, equality, and liberty that so many gave their lives to secure.” — U.S. President Donald Trump, commencement address at West Point. June 13, 2020

The U.S. Military has as many challenges with diversity and equality as any other organization. There are issues with lack of diversity in military leadership, and cadets at West Point who were recently polled about racial inequality reported problems with other cadets and with superiors.

However, President Trump has a good point about West Point. The West Point graduating class of 2019 included 985 cadets:

President Trump went on to speak about the endurance of great American institutions, like West Point. He challenged the graduates to uphold their commitment to duty, honor and country.

“The survival of America and the endurance of civilization itself depends on the men and women just like each of you. It depends on people who love their country with all their heart and energy and soul. It depends on citizens who build, sustain, nurture, and defend institutions like this one; that is how societies are made and how progress is advanced.”

“What has historically made America unique is the durability of its institutions against the passions and prejudices of the moment. When times are turbulent, when the road is rough, what matters most is that which is permanent, timeless, enduring, and eternal.” — U.S. President Donald Trump, commencement address at West Point. June 13, 2020

At which point the recent graduates of West Point observed one longstanding, time-honored tradition that has survived even the Covid-19 era of social distancing: They tossed their caps into the air and cheered as helicopters flew overhead in celebration.