Jewish Democrats are becoming deeply disenchanted with the progressive left and a growing tolerance for anti-Semitism in the Democratic Party. 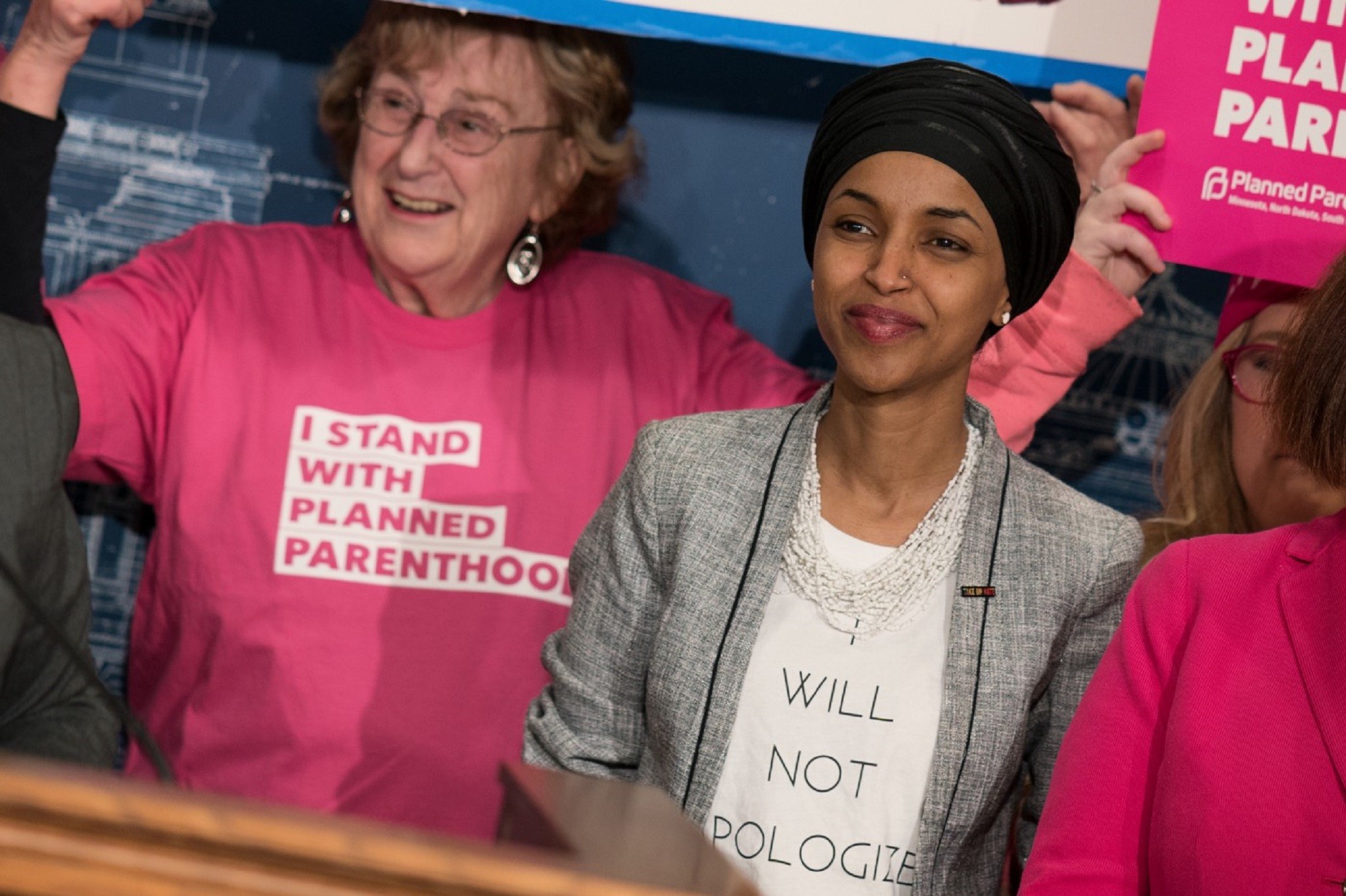 “Blah Blah, The Jews Control The World With Their Money, Blah Blah”

This headline of a full-page ad published in the Washington Post Sunday was a necessary if humorous reminder by a pro-Jewish group that anti-Semitism isn’t exactly progressive.

That anti-Semitism has found a foot-hold among progressive Democrats is laughable, but the Jewish community isn’t laughing.

As the American progressive left continues its wholesale embrace and normalization of insulting and dangerous anti-Semitic tropes that have been threatening Jewish communities with extinction for a thousand years, American Jewish voters continue to be horrified.

It is no surprise that Democrats have been very busy lately trying to take down their arch-enemy President Donald Trump. But Democrats aren’t exactly treating their friends very well lately, either. And that is surprising.

The vast majority of Jewish people in the U.S. have been voting Democrats for decades. Most Jewish Democrats, and about 75% of Americans who are Jewish register as Democrats, were very disappointed in the House’s recent failure to condemn Rep. Ilhan Omar outright for anti-Semitic comments.

In an apparent effort to appease progressive left critics of Israel the resolution was watered down to condemn all forms of ‘hate’ and failed to address Omar’s comments specifically or her by name.

“Omar has employed all three of the basic slurs that have defined modern antisemitism: hypnotic mind control, economic manipulation, and dual loyalties. The Svengali, The Rothschild and The International Jew.” — Shmuley Boteach, “America’s Rabbi” in The Jerusalem Post.

There is also a growing unrest in Jewish communities about a failure of the Democratic party on the whole to condemn not just oblique, but rampant anti-Semitism in their ranks.

Though his organization has been declared a hate group by the Southern Poverty Law Center, anti-Semitic hate-preacher Louis Farrakhan is still being welcomed to speak on college campuses across the country. And hailed by the progressive left.

This, in spite of referring to Jews as termites and constantly blaming the ‘Satanic Jew’ for the world’s problems. Jewish Democrats may be wondering, rightly, why Louis Farrakhan was standing right next to former-President Bill Clinton at the recent funeral of soul-Queen Areatha Franklin as if he were perfectly normal.

Linda Sarsour is free to speak at NYU, in spite of her open association with Farrakhan and virulent anti-Semitism. Yet a pregnant Chelsea Clinton can’t show support and solidarity with the American Muslim community by attending a prayer vigil for victims of the recent Mosque shootings in New Zealand without being accosted by anti-Semitic NYU students blaming her for the massacre because Clinton dared call out Omar’s anti-Semitism.

Anti-Semitism, many argue, killed the Women’s March, as more and more people chose not to take part due to its founders’ open association with Farrakhan and failure to condemn anti-Semitism.

Rep. Rashida Tlaib once published in the media-arm of Farrakhan’s looney anti-Jew empire. Farrakhan recently rushed to the defense of Rep. Omar’s latest foray into absolutely unnecessary anti-Semitic hate speech when she convened a ‘Progressive Town Hall’ at a hip D.C. eatery to speak with people who are not her constituents and live 1,000 miles from her district.

Incidentally, when Louis Farrakhan calls you “sweetheart” and says you don’t have anything to apologize for, you need to apologize immediately.

A top Bernie Sanders spokesperson was even sharply criticized in recent weeks for Facebook comments she made calling into question the dual-loyalty of American Jews. Someone working for Bernie Sanders, who is Jewish himself, should know better.

Democrats questioning American and Jewish loyalty to Israel and accusing Jewish money of being the driving force behind it are missing an important point about Democracy.

This week as the Jewish special interest group AIPAC convenes for its annual conference in D.C., controversial Minnesota Rep. Ilhan Omar and her increasingly emboldened anti-Semitic comments continue to be the focus of people deeply troubled by the ever-growing anti-Semitism in the Democratic Party’s progressive left.

“All over the world, anti-Semitism is on the rise. On college campuses, in the marketplace, even in the halls of Congress. You know, there was a time when support for Israel was not a partisan issue here in Washington … But how things have changed.” — Vice President Mike Pence, at AIPAC 2019

Democratic leaders like House Speaker Nancy Pelosi and New York City Mayor Bill de Blasio attended this year’s AIPAC event and were quick to point out that a vocal minority of progressive Democrats espousing anti-Semitic attitudes does not represent the entire party.

Two Jewish Democrats in the House are currently pushing a measure to condemn any international boycott campaign aimed exclusively at Israel.

Because for the first time, sitting Congresspeople are openly supporting the BDS movement specifically targeting Israel and threatening its right to exist. Ostensibly, the group uses accusations of human rights violations by Israel as a smokescreen for anti-Semitism.

Plenty of other countries violate human rights, Israel isn’t even in the top 10. The American Jewish community must be wondering which other countries these Congressional Democrats intend to target with boycott movements.

The answer, of course, is none.

Because BDS doesn’t really have a problem with human rights violations; if they did, it would be difficult to explain any support of Hamas or Hezbollah. The sovereign state of Israel, incidentally home to a population comprised of 17% Israeli Muslims, does not benefit from civilian casualties in Palestine.

Hamas leadership has openly called using Gazans as human shields an effective tool in the fight against Israel. That is why Hamas frequently locates missile launching operations in schools and other public buildings.

If Israel really wanted to kill Gaza’s citizens, it could wipe out the entire region overnight from the air.

If on the other hand, Hamas had an arsenal like the Israelis, there wouldn’t be a single Jew left alive in Israel. If supporters of the Palestinian cause truly believe Hamas would stop after killing all the Jews in Israel, they aren’t paying proper attention.

The number one religious group persecuted by extremist terror groups like Hamas and Hezbollah, ISIS and al-Qaeda, has always been and remains co-religionist Muslims.

“Ilhan Omar speaks for no one but herself when she defames Jews as buying lawmakers and being guilty of dual loyalty. Muslims and Jews are brothers. But Tlaib and Omar seem determined to drive us apart. There has never been real tension between the two communities in the United States. But Omar and Tlaib are doing their utmost to defame Jewry as much as possible, in the hopes of sewing a deep rift between Muslims and Jews, an outcome that I trust all God-fearing adherents of both faiths will reject.” — Shmuley Boteach, “America’s Rabbi” The Jerusalem Post

It may be time for Congressional Democrats to choose between the shared values, common economic interests and a commitment to democracy they share with Israel and the demands of a vocal minority on the progressive left.

Appeasing the demands of a vocal minority on the progressively left who are wrong in their judgement of Israel, who are not themselves without bias in this matter, might cost Democrats dearly in 2020.

Entitled Employees Are Taking the Bite Out of Apple Jul 24, 2021