Will Prescription Prices Go Down? 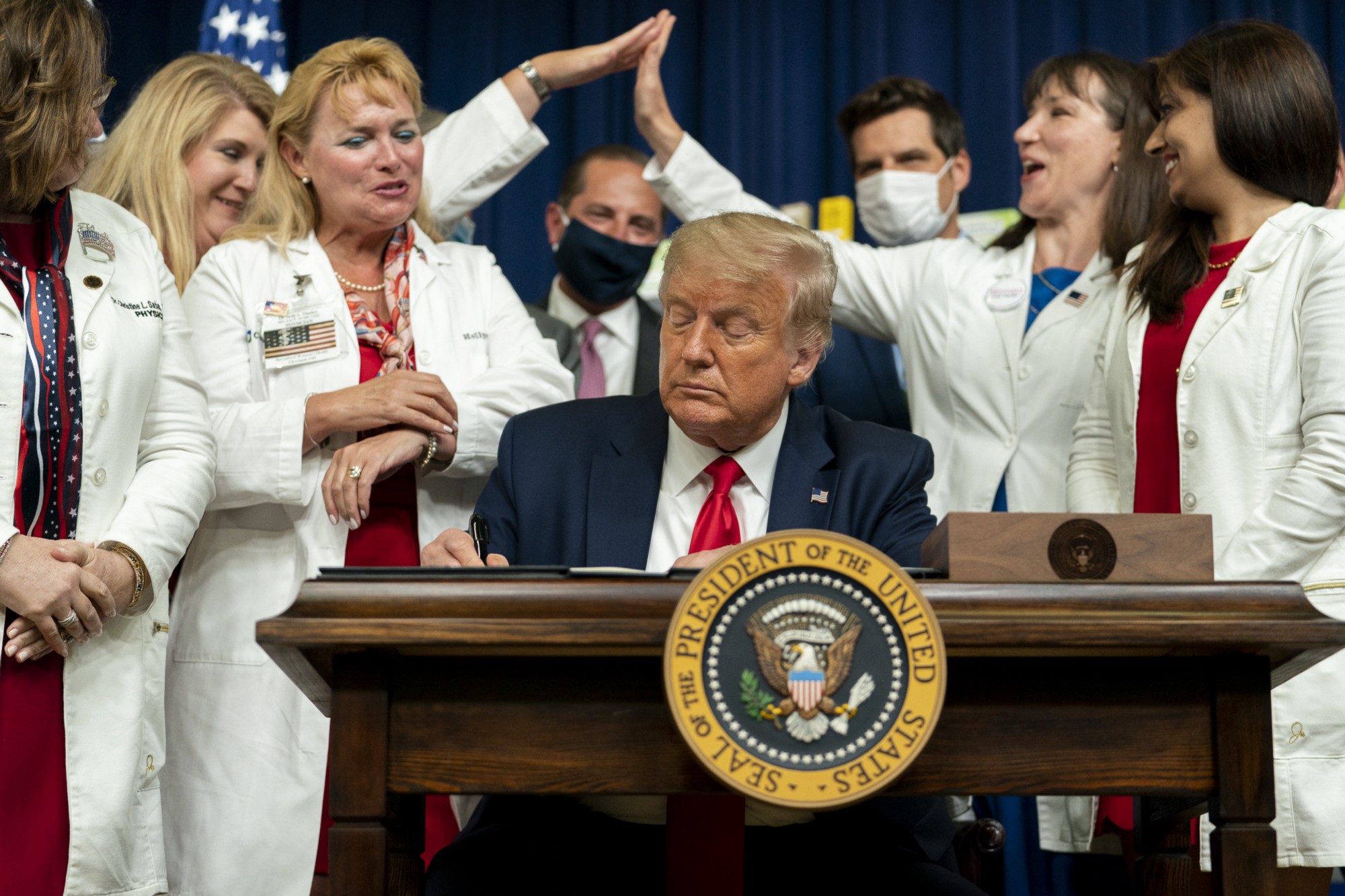 President Donald J. Trump is applauded as he signs a series of Executive Orders on lowering drug prices Friday, July 24, 2020, in the South Court Auditorium in the Eisenhower Executive Office Building at the White House. (Official White House Photo by Shealah Craighead)

There is no shortage of low-hanging fruit on the political field as U.S. voters brace for an election year sprint unlike any other.

The cost of healthcare, and the cost of education, have skyrocketed over the past three decades. That both major political parties have largely ignored these two foremost voter concerns has created an enormous opportunity for someone like Donald Trump.

“Since the day I took office, I have made reducing drug prices one of my highest priorities.” — President Trump

Besides uninsured Americans, for whom the idea of expanding the Medicare/Medicaid benefit is often entertained, there are many insured consumers currently in the healthcare system who still can’t afford their medication and treatments.

The soaring price of prescription drugs was one important area of healthcare ignored by Obamacare. That job, left unfinished, could prove Democrat’s undoing in November if the Trump administration manages to drastically lower prescription drug prices between now and election day.

It is a well-known fact that Americans pay more than people in other countries for the same drugs, with the same ingredients, manufactured by the same companies- sometimes three times as much.

Americans pays more for pharmaceutical drugs than any other patients in the world. The pharmaceutical companies often claim this is because Americans bear more of the cost for researching and developing new drugsand treatments.

But one of the key reasons other countries pay so much less, is that their governments go to bat for patients and consumers by implementing strict pricing controls and oversight. In the U.S., the drug manufacturer can set the price of a drug at “whatever the market will bear.”

In other countries, the price the pharmaceutical company charges must be approved by a governmental body.

First, Sect. Azar has been instructed to end a back-channel system of kick-backs pharmaceutical companies pay to “middle men”. This system of incentives does nothing to improve the patient experience; it has nothing to do with protecting public health.

As executives have lined their pockets, Americans have found the cost of their prescriptions exploding.

To change this system, HHS intends to ensure that any financial “kick-backs” paid by pharmaceutical companies get passed along in savings to the consumer. It is estimated this change might save seniors between 26%-30%.

Low-income patients and consumers in particular will benefit from this reallocation of kick-backs.

Second, the U.S. Department of Health and Human Services has been instructed to finalize a rule allowing states to develop safe importation plans for certain prescription drugs.

Under this new rule, individual U.S. consumers will also be able to safely import drugs from other countries.

Allowing U.S. consumers access to pharmaceuticals sold at cheaper prices in other countries will put free market pressure on drug manufacturers to price U.S. customers in line with what other patients pay.

Third, and perhaps most importantly, the HHS has been charged with taking action to ensure the Medicare program and U.S. seniors pay no more for pharmaceutical drugs than any other comparable country.

The massive buying power of Medicare will put more pressure on drug companies than perhaps anything else. Allowing Medicare to leverage its size to lower the cost of prescription drugs, at least in line with what other countries pay, is a smart strategy that could win Trump plenty of votes from older Americans who depend on Medicare.

The U.S. often pays 80% more than what consumers in other countries pay.

Now that Trump has acted decisively to lower prescription drug prices, the Democratically-controlled House and Republican-Controlled Senate have an opportunity to respond in kind.

A phone and pen presidency, like the one routinely touted by former President Barack Obama, has its limits: Anything that can be done by one president with a pen and a phone can be undone by the next just as easily.

Executive orders are easy to pass. Legislation that has passed the Senate and the House and has been signed into law a by a U.S. President is much harder. It is also much harder to undo. With this in mind, Democrats in the House should not miss this opportunity to claim some of the credit for lowering prescription drug prices.

Sending a bill identical to Trump’s executive order would ensure the President’s signature. Republicans in the Senate would have little choice but to approve such a piece of legislation, originating as it does with the incumbent Republican executive.

Drug companies, and their attendant lobbyists, are not happy with these moves by the Trump administration and Alex Azar. Opponents of these measures are already pointing out the shortcomings of such executive orders.

When it comes to lowering prescription drug prices for Americans who have been overpaying for years, the Obama administration was the best time to act. Now is the next best.

If Democrats in the House, led by Nancy Pelosi, feel like going to bat for U.S. seniors, and all U.S. patients who can’t afford their health care, there has never been a better time.

If the Trump administration’s latest efforts to lower the price of pharmaceutical drugs in the U.S. are even more successful, Democrats may come to regret not striking while the iron is hot.

A Republican in office is willing to take on the pharmaceutical companies to lower prescription prices: If House Democrat are unwilling to help, the 2020 Election Day optics may be a major liability.