House Democrats currently have the power to elevate an African-American woman to the third-highest office in the U.S. 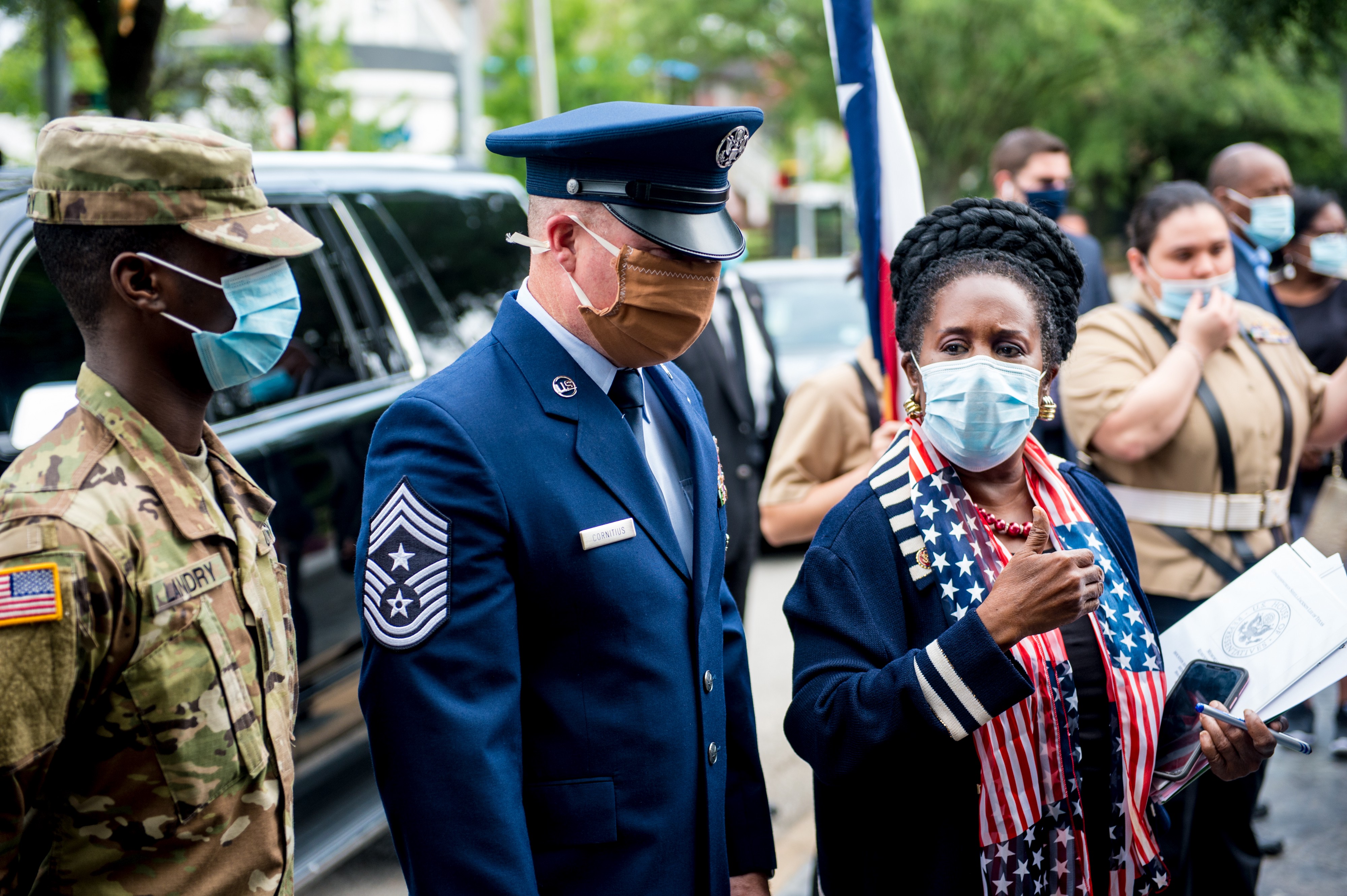 During a national crisis, like the one we are experiencing in the aftermath of the George Floyd killing in Minneapolis, some leaders rise to the challenge.

Energized and motivated, truly visionary leaders surge into action when times are toughest; usually the same civic-minded actions they have been repetitively, quietly but diligently, carrying out for years.

Rep. Sheila Jackson Lee (D-TX) is one such leader.

House Democrats, currently having the majority in the House of Representatives, can vote to elevate Shelia Jackson Lee to the third-highest office in the land.

No one is more qualified to lead America through this difficult moment. The Democratic Party can make history by electing Rep. Sheila Jackson Lee as the first African-American woman to hold the Speaker’s gavel.

Doing so would also send a strong message to the Biden campaign, increasing the likelihood that one of several qualified African-American women currently vying to be Biden’s running-mate will soon become Vice President.

What has become abundantly clear during this moment of national soul-searching, is that more representation of the diversity in America is needed at leadership levels in every industry, collective and bastion of social life.

The Democratic Party is no exception.

There is an unbearable amount of evidence for this necessity in our culture, much of it deeply embarrassing. This evidence includes recent high-fashion campaigns that inexplicably produced turtlenecks reminiscent of “Black face” and SnapChat’s highly questionable decision this week to roll out a special filter in celebration of Juneteenth: Chains over a person’s face which they must smile to break.

There is also plenty of evidence of this in the Democratic Party. How else do you explain Joe Biden telling an audience full of African-American voters in 2012 that then-candidate for President Mitt Romney would “put ya’ll back in chains!”? Or Sen. Dick Durbin referring to an African-American Senate colleague’s criminal justice reform proposal by the racially-dismissive label “token” this week?

Democratic Party leader and current Speaker of the House Nancy Pelosi has been doing her best during the George Floyd protests. But many of her actions have revealed just how out of touch she is with the appetite of the American people for meaningful change.

After former KKK leader Robert Byrd’s death, Pelosi spoke openly about her friendship with him and praised his work in congress. Such statements speak to Pelosi’s lack of awareness around the issue of racial justice in America.

“Senator Byrd took pride in his status as Congress’ foremost scholar on the Constitution, on the Senate, and on the institutions of our Democracy. He never hesitated to speak truth to power. He was a voice of reason during times of war and economic hardship. He was always a gentleman, capable of charming any friend or foe. And he always stood on principle, even when others did not.” — Rep. Nancy Pelosi (D-CA)

After Robert Byrd’s time as a KKK leader, he claimed to have a change of heart and became an advocate for equal rights. Previously, Byrd had long denounced civil rights leader Dr. Martin Luther King, Jr. in Congress, calling him a “self-seeking rabble rouser.”

Pelosi worked with Byrd for 23-years; a man who was once the “exalted cyclops” of the KKK, recruited over 100 people to join his chapter, and warned against America becoming racially integrated.

While Pelosi has called for the removal of Confederate House Speaker portraits in the Capitol gallery, people are in the streets calling for more serious measures.

Meanwhile, Rep. Shelia Jackson Lee has maintained a laser-like focus on achieving results. She understands that the American people will not be satisfied by the removal of a few old statues or portraits most people have never seen anyway.

Under the leadership of Shelia Jackson Lee, House Democrats recently rolled out legislation aimed at minimizing the specific types of police violence that led to George Floyds death- which they called a sacrifice that “has brought America to its knees”.

Nancy Pelosi is now in her third term as House Speaker and though removal of a current Speaker of the House would be unprecedented during this time, these are extraordinary times. They call for extraordinary leadership.

Nancy Pelosi came to Congress three decades ago to fight for AIDS patients, AIDS awareness, and AIDS research. The work Pelosi, and many others, have done to improve the lives of HIV and AIDS patients and advance a cure cannot be understated.

AIDS was Nancy Pelosi’s fight; and she fought it well.

Civil Rights is Shelia Jackson Lee’s fight; it always has been.

A female African-American leader in charge of the House would be a significant improvement of representation for the Black community. In Shelia Jackson Lee, African-American voters see a leader who understands and has actively addressed the needs of minorities in America.

Black voices in America are clamoring to be heard. There is no better way for the House of Representatives to represent the best interests of minorities than to elevate a highly-qualified minority representative, Sheila Jackson Lee (D-TX) to the third-highest office in the land.

Jackson Lee is just as qualified as Nancy Pelosi.

Rep. Sheila Jackson Lee already sits on three congressional committees. She is a senior member of the House Committees on the Judiciary and Homeland Security; she was appointed by leadership to the Budget Committee.

Rep. Jackson Lee authored, introduced, and successfully passed a reauthorization of the Violence Against Women Act. She has introduced other important legislation including:

In every way, Rep. Sheila Jackson Lee has shown unwavering support for minority communities. 40% of the bills Jackson Lee has sponsored have been criminal justice and law enforcement reform bills; 9% have been focused on civil rights and liberties, and minority issues.

The congresswoman earned a B.A. in Political Science from Yale University with honors in the first graduating class to include female students. She also holds a J.C. from the University of Virginia Law School.

She is not a Congresswoman of performative action; she will get things done for the American people who now demand it.

While it may seem unorthodox to replace Pelosi, Rep. Sheila Jackson Lee is the inspirational, experienced leader the current moment and movement demands.

Democrats choosing Sheila Jackson Lee for Speaker would send a clear and strong message to Black voters that their concerns have been heard and will be acted upon.

The move would also be a long overdue acknowledgement of the many contributions Black women, including Jackson Lee, have made to the Democratic Party, through many years of hard work, without the credit or influence they deserve.

The Democratic Party controls the House of Representatives. They have all the power they need, right now, to make history by electing the first African-American woman to the Speaker’s gavel.

This is an opportunity that should not be missed.