If the Mayor could win reelection, wouldn’t she try? 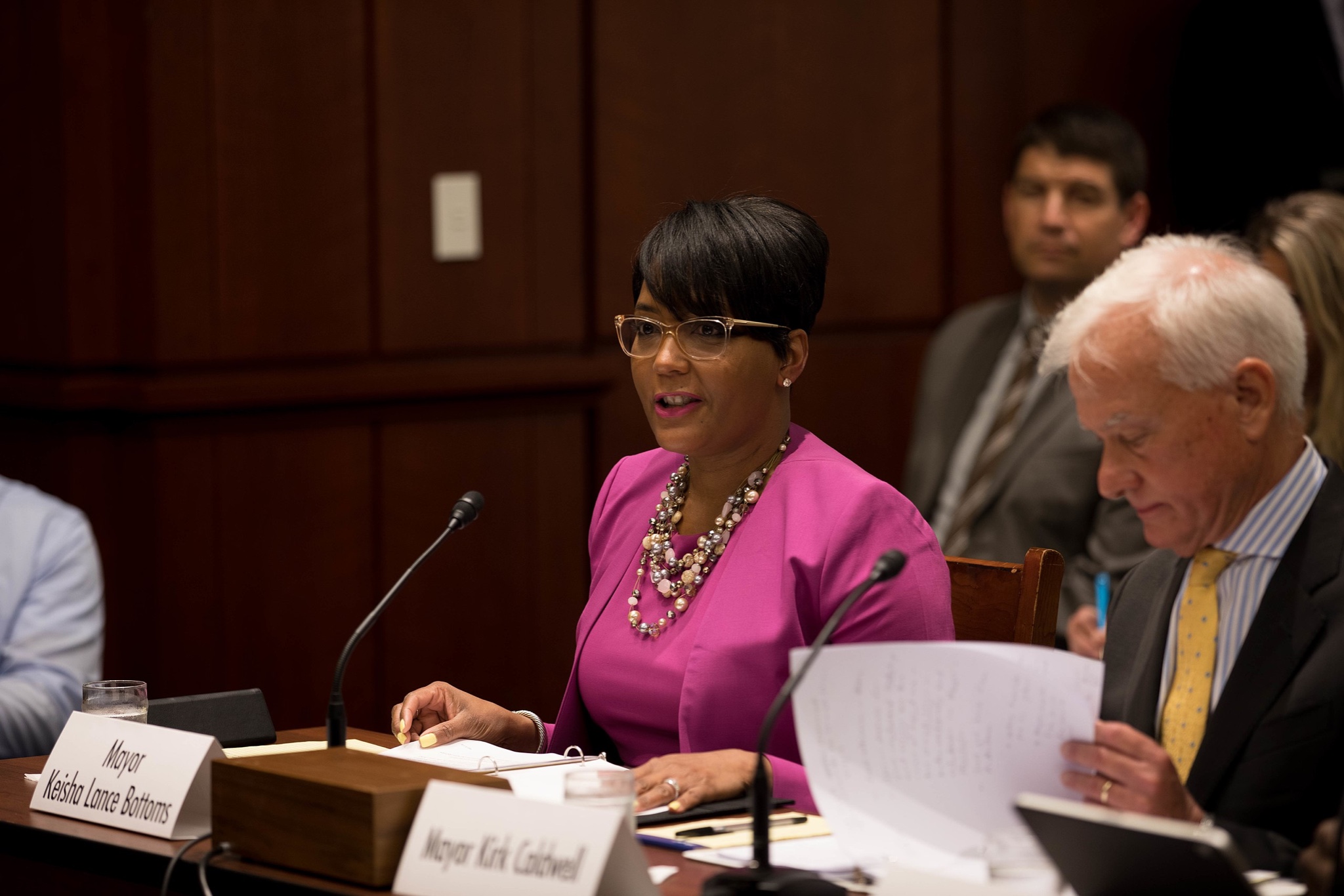 To the shock of political observers on both sides of the aisle, Atlanta Mayor Keisha Lance Bottoms, once and future rising star of the Democratic Party, announced in May she will not be seeking reelection.

Though she failed to specify exactly why, she did make a point to mention her decision was not based on fear of losing or lack of financial support for her candidacy from Democratic Party leadership at the highest level.

“Can she fundraise? YES,” Bottoms wrote of herself in a public letter explaining her decision to the city of Atlanta. “With the support of President Biden, I had the most successful single fundraiser of any Mayor in the history of Atlanta.”

A very successful, very recent fundraiser, the Mayor neglects to add, during which she was still very much still in the reelection race to retain her office.

“Can she win again? ABSOLUTELY,” Mayor Bottoms continued in her public statement. “Multiple credible polls have shown that if the race for Mayor were held today, I would be re-elected.”

“Is she afraid of the competition? NEVER,” Bottoms wrote. “I have engaged in several elections, facing multiple candidates, and never once have I cowarded from the competition.”

“How did Bottoms go from turning down a Cabinet post to turning down a chance at a second term?” the Atlanta-Journal Constitution mused after Bottoms made the surprise announcement.

In spite of her seemingly heartfelt letter, and the many reasons Bottoms named as not factoring into her decision, she markedly withheld the reasons for this unusual choice.

“Is she running for another office?” the Mayor posed this very question in her “Dear Atlanta,” letter, cagily answering: “While I am not yet certain of what the future holds, I trust that my next season will continue to be one full of passion and purpose, guided by the belief that within each of us is the power and responsibility to make a positive difference in the lives of others.”

The question remains: If Mayor Keisha Lance Bottoms could win reelection, why wouldn’t she try?

Political campaigns are expensive, exhaustive, time-consuming affairs that take over your whole life, and often your family’s lives, too. There is endless travel, stumping, speech-making, fundraising, glad-handing, parade walking. There are meetings upon meetings upon meetings, and if you think you’ve had too many meetings, it must be time for one more.

Reelection campaigns, on the other hand, are usually a great deal easier.

There is a reason running as an incumbent is generally considered a significant campaign advantage. It’s a basic scientific principle: The activation energy required to start a process is greater than the energy it takes to maintain it- and it applies doubly to political campaigns.

Squandering such a position does much more than number your days as an elected official. Mayor Keisha Lance Bottoms, like any other elected official, did not achieve election in a vacuum. It took a village; staff members, campaign workers, communications experts, marketers, fundraisers, event planners, volunteers, donors, Democratic Party leadership, et al.

Good luck fundraising from here on out; donors, and there aren’t an unlimited number of them, will remember their wasted contributions to the Keisha Lance Bottoms campaign when she walked away after one term.

The fact that Bottoms has chosen to squander her, and her party’s, chances to run as an incumbent is mystifying.

Polls, as we have reason to note, aren’t worth the paper they aren’t printed on these days. Were Mayor Bottoms, and her team, seeing other polling numbers they didn’t like and therefore didn’t share with the public?

Incumbents at the state and local level, many of them Democrats, have borne the brunt of the most unpopular measures taken during the worst of the COVID-19 pandemic. Approval ratings for popular media figures like Michigan Governor Gretchen Whitmer, California Governor Gavin Newsom, and New York Governor Andrew Cuomo have taken quite a hit.

Considering how skewed polls have become, approval ratings are probably much worse than is being widely reported. The more self-aware pollsters are still expressing great chagrin at their incorrect predictions circa 2016 and 2020- plus confessing to having no idea how to fix it.

Going forward, polls are clearly to be taken with a grain of salt until pollsters figure out how to produce a proper random sample again and/or a good enough reason to do so.

There have been other challenges for Mayors like Keisha Lance Bottoms, Governors, too. Crime, as even the staunchest anti-police progressives are being forced to admit, is ballooning at an alarming rate.

Though many prominent Democrats, President Joe Biden chief among them, have taken pains to distance themselves from the “Defund the Police” movement, many progressive criminal justice reform measures taken by state and local authorities have already done exactly that. And then some.

“Early in her term, Bottoms eliminated cash bail in Atlanta and ended the city jail’s relationship with federal immigration enforcement agencies,” MSN admitted, though omitting the context of the city’s rising crime rates, or any notion that these actions essentially defunded the police.

Why would a police officer risk his own safety, and his job, to make an arrest when the suspect, whatever his charges, is likely to be back out on the streets before lunchtime?

Atlanta’s Mayor, seeking reelection or not, is facing down the same unimaginable next few months many major metropolitan city governments are facing: Sharply rising crime; a demoralized, depleted police force with a lack of community support and a mutual air of distrust; the warmer months which almost always bring an uptick in violent crime; and guns, guns, guns.

The last 18-months have been some of the best sales gun manufacturers have ever seen. More Americans bought guns last year than ever before, across all demographics. First-time gun buyers bought guns, Democrats bought guns.

Then of course, there are all the illegal guns on the streets, including so-called ghost guns assembled from kits and unregistered. Someday soon, if they aren’t already, law enforcement agencies, neighborhood watch captains, crossing guards, city bus drivers and everyone else besides is going to be grappling with 3D printed guns.

Perhaps Mayor Keisha Lance Bottoms isn’t squandering an opportunity to run as an incumbent. This might be no time to be an incumbent. Bottoms made some hard choices as Mayor. Everything has consequences, even doing the right thing.

Ending cash bail, and some of the other measures the Mayor took during her tenure might have been the right thing to do, for the people of Atlanta- present and future; perhaps not.

The price of good governance is that it usually takes years, if not decades, to really tell the ultimate success of a policy change. Politicians, like Bottoms, who take a chance on great change might have to bear the short-term problems such changes almost inevitably cause.

In the fullness of time, we may come to see Atlanta, not as a city struggling with rising crime, but as a city which successfully made the criminal justice system more equitable, more just for all.

“My ancestors, direct descendants of the once enslaved, traveled by horse and buggy from the cotton fields of east Georgia, in search of a better life for themselves and their children in Atlanta,” Bottoms wrote in her goodbye.

“I have carried their belief for a better tomorrow in my heart, their earnest work ethic in my being, and their hopes for generations not yet born on my mind, each day that I have been privileged to serve as the 60th Mayor of Atlanta, the city that I deeply love.”