Where Have You Gone, Jim Clyburn?

He ushered in the Civil Rights era, saved the 2020 election, and is a member of the Congressional Black Caucus. He says we should pay police more. 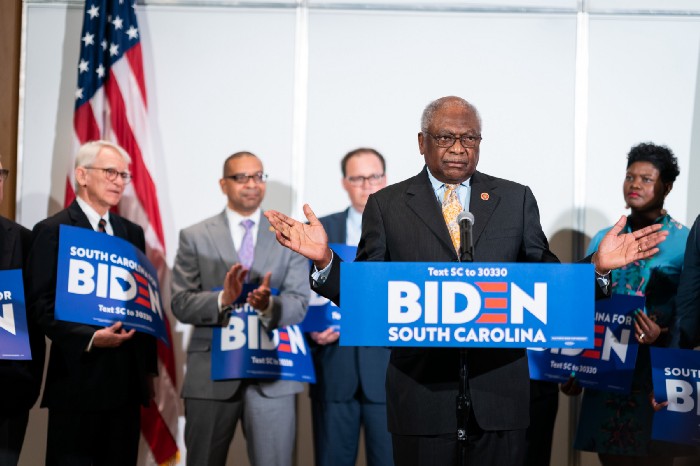 There are two distinct schools of thought in the Democratic Party today.

At least, there are two schools of thought as it pertains to policing and criminal justice reform in America. For every other pressing social issue of our time, there are at least half-dozen warring factions within the the Democratic Party at any given time.

The Republican Party, too.

It’s only natural. Even when people agree about what needs to be done, and they agree on how best to do it, there are still disagreements, and bitter ones, about who’s going to pay for it, where benefits should be applied, who gets the credit, and a million other things.

It’s true: All the clever tactics and brilliant strategies in the world won’t help an army extended out across a continent without a supply line of food and water. Logistics don’t just win battles, they win wars. They are the difference between a successful mission and an unsuccessful one, life or death.

Logistics are also the difference between a poorly executed policy that hurts more people than it helps, and a well executed one that does the opposite.

Which is why it pays to have plenty of inter-party discussions around important, multi-faceted policy topics, like criminal justice and policing reforms. These things require careful planning, thoughtful consideration; input from experts on all sides, interviews and research.

Of course, the two Democratic schools of thought aren’t divided along the line of “Do we need policing and criminal justice reform in America?”

There aren’t many Democrats who don’t believe in the need for criminal justice and policing reforms in America, if any.

What Democrats disagree about, and most vehemently, if politely and quietly, is defunding the police. Most Democrats are professional about it, but the battle lines have been drawn.

Democrats who believe reforms can be accomplished without abolishing and defunding policing as we know it comprise one school of thought. They tend to be the more moderate Democrats. Sometimes they are merely the more practical ones, in terms of what voters are likely to support.

Rep. Jim Clyburn is among the ranks of these. He stunned his fans and stupefied his critics yesterday by advocating for paying police officers more, rather than stripping police departments of funds.

Unfortunately for Clyburn, prominent as he is, the other school of thought disagrees- strongly.

In the other school, are Democrats who believe nothing less than a total overhaul, defunding, and abolishing approach will eradicate what is broken in our criminal justice system.

Progressives in the Democratic Party who believe defunding the police is a good idea, or indeed even a practicable one, have been coming up against a harsh wall of reality in the months since Mr. Floyd died under a murderer’s knee in Minneapolis.

Cities that have tried it, Minneapolis chief among them, have not only failed, but failed so badly as to set back more realistic criminal justice and policing reforms back decades.

It’s been such a disaster, former supporters have turned against the project. In Democrat-voting areas where crime is skyrocketing, new converts are evaporating. If this continues, ballot measures to reform policing aren’t going to be passing anytime soon.

What Democrats like Rep. Jim Clyburn are trying to impress upon this conversation, is another important factor party progressives seem to be missing:

Beat patrol officers are the minimum-wage workers of the law enforcement world, the lowest rungs on the ladder.

It is possible that the Democratic Party should be helping them- angling for better training, better pay, more protective equipment, safer work environments- not allowing those further up the chain of command to hang them out to dry after they’ve failed to win in an un-winnable situation.

Moderate Democrats are perhaps right to point out that passing better laws will be more effective than an endless cycle of systemic injustice and pointless scapegoating.

We should not blaming the lowest paid individuals on the corporate ladder of law enforcement while ignoring completely the drivers of the inequities in our justice system.

Addressing drug policies would be a good place to start.

Once upon a time, our lawmakers incentivized pursuing drug crimes in lieu of anything else and it shows. Once police departments were able to seize the property of people convicted on drug crimes, the result was inevitable: People are stacked into jail on drug crimes while thousands of rape kits remain untested year after year.

It’s as good an example of criminal negligence and neglect as anyone can imagine, a disgraceful miscarriage of justice.

Good, ordinary working cops, and the people they arrest, bear the brunt of all the flaws in our current system. Even the increasingly diverse police forces in places like Chicago and Portland.

On a pittance, they suffer even when the system works as it should. Good cops are forced to spend all their time chasing drug users, and rearresting the same mentally ill and chemically addicted people. Meanwhile ordinary people, many of them Black, spend their entire lives behind bars for nonviolent drug crimes.

And woe betide everyone when the system doesn’t “work” as it “should”. Cops are sent into no-win situations. From these no-win situations, when their split-second, life or death decision turns out to be wrong, innocent people die and the cop becomes a scapegoat stand-in for the broken system.

Not Derek Chauvin. He is a convicted murderer and deserves his sentence. As one of the bystanders shouted at Chauvin that fateful day as paramedics were finally loading George Floyd onto a stretcher: “You just killed that man! That man is going to haunt you for the rest of your life, bro.”

Not the police officer caught on camera bragging about breaking the shoulder of a confused elderly woman who sat nearby in a holding cell whimpering, without medical attention for six hours. Throw the book at them.

Not the Baltimore officer caught planting fake evidence on innocent people. They get no quarter. No one despises dirty cops more than good cops and no one will be sad to see sick people like Derek Chauvin stripped of their authority and punished, even by a system too broken to charge him with first-degree murder.

Accidents happen, though. Mistakes are made, all the time. In the recent officer-involved shooting of a 16-year old who was attacking another girl with a knife at the time, things may be muddier.

But there can be no question that we are living in a society which has penalized non-violent blue collar crime to the hilt. Drunk driving, shoplifting, robbery, burglary, stealing a car, selling drugs, will be punished most severely.

White collar crime is another matter.

Sling dope, go to jail. Drive an entire industry to the brink of financial ruination requiring a federal bailout of billions of dollars, get off scot free. Game the tax code to avoid paying your fair share, deepening an already unfathomable wealth divide while paying lip service to progressive principles via powerful media companies you own, print all the money you want.

The real-life Hans Grubers of the world really needn't bother stealing anything, really. Any wherewithal, and they’re on Wall Street fleecing small investors with the best of them.

Rep. Jim Clyburn is right to turn the conversation to matter of the inequities in our justice system, and away from working-class cops.