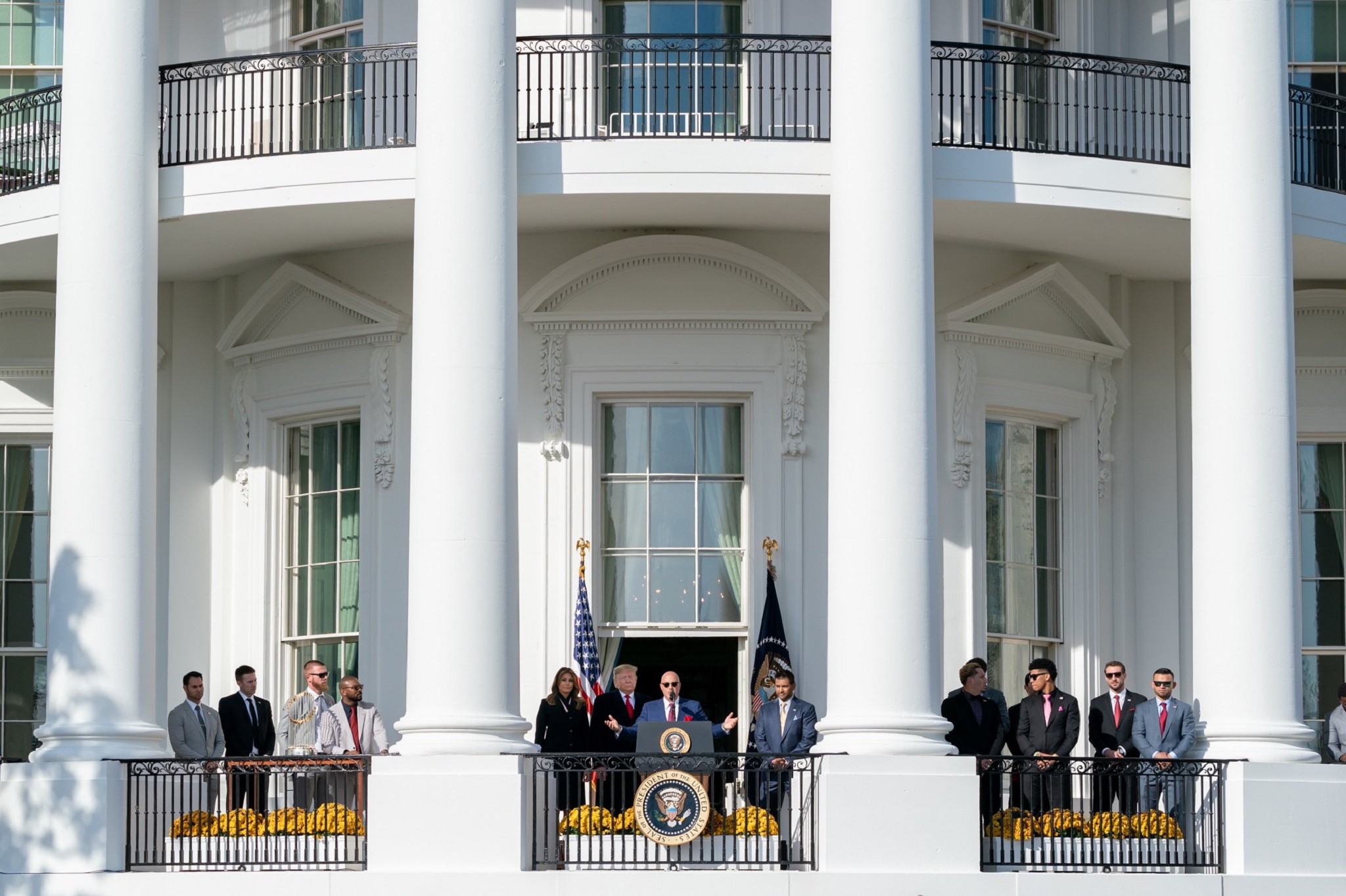 They weren’t even supposed to be there.

But after a wild-card win kept the team alive in the post-season, something unexpected happened to the Washington Nationals: They started winning.

What happened next was a near-miracle:

The Washington Nationals won it all- for the first time since 1924. 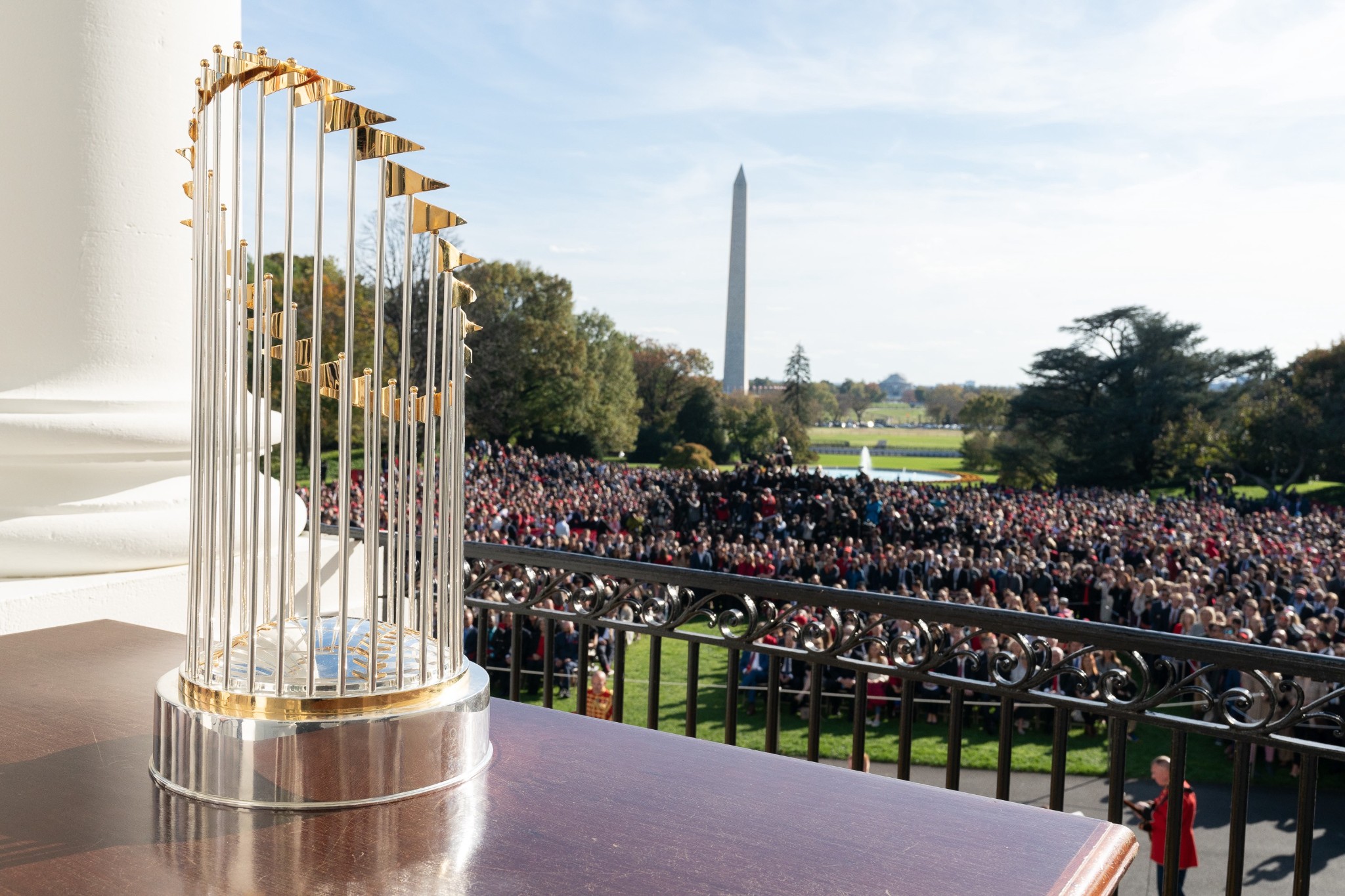 The World Series Trophy is seen on display during the visit of the 2019 World Series Champion Washington Nationals Monday, Nov. 4, 2019, on the South Portico balcony of the White House. (Official White House Photo by Shealah Craighead)

The Washington Nationals faced the Houston Astros in the World Series- a formidable team dominated by near-perfect fielding and an all-star lineup of powerful batters.

“You reminded us all why baseball is truly America’s past time.” — President Donald Trump

After blowing a two-game lead in the series by losing three successive games, the Washington Nationals forced a game seven when they managed to pull off a colossal win in game six. 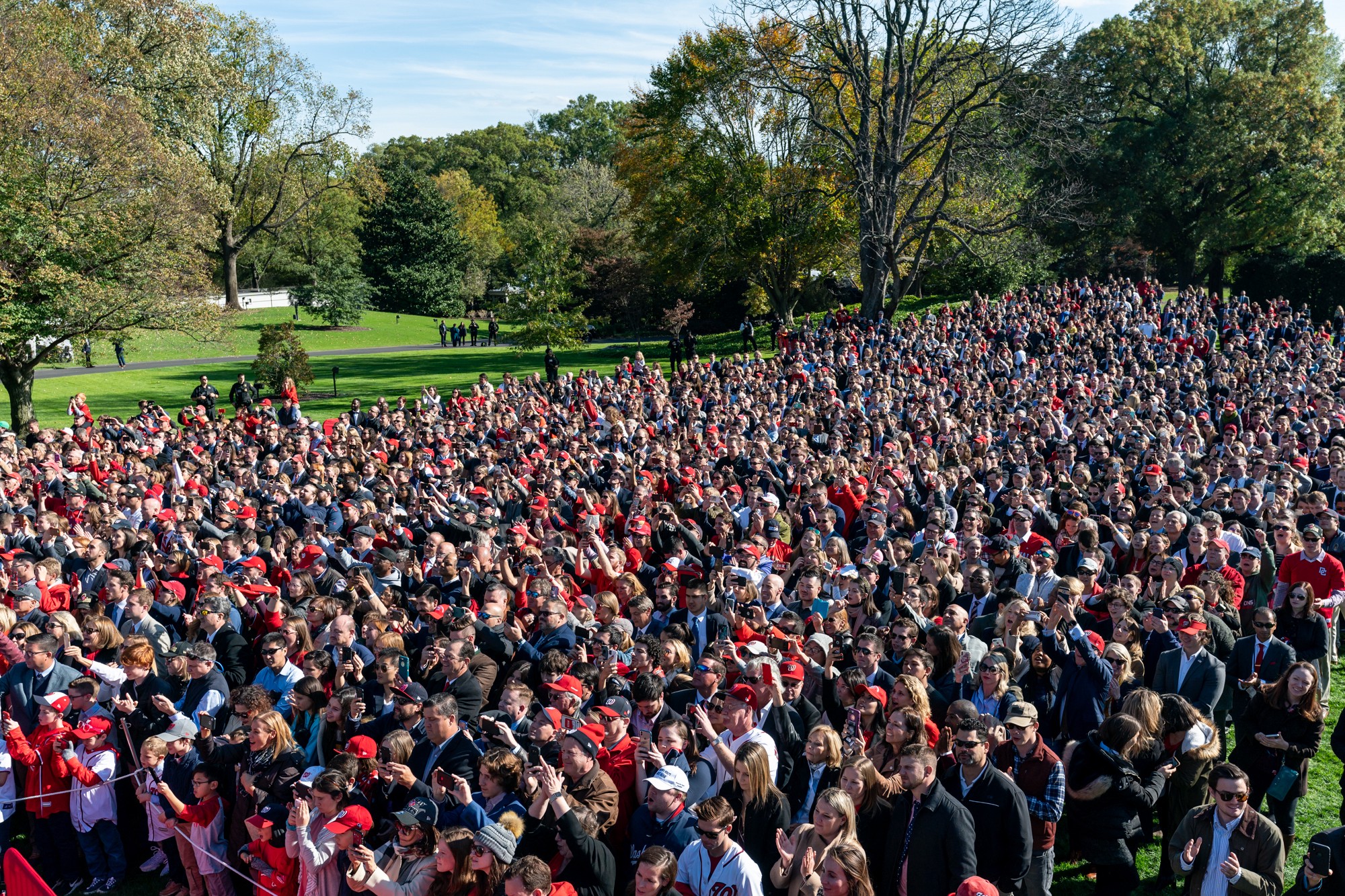 The final game of the 2019 World Series was a tense one for Washington Nationals fans.

Down two runs with the game in the seventh inning, it was a homer struck by third baseman Anthony Rendon that first turned the fortunes of the team.

With the score at 2–1 Astros, following Rendon to bat was 21-year old outfielder and baseball whiz kid, Juan Soto, who scored a walk just ahead of power-slugger Howie Kendrick. 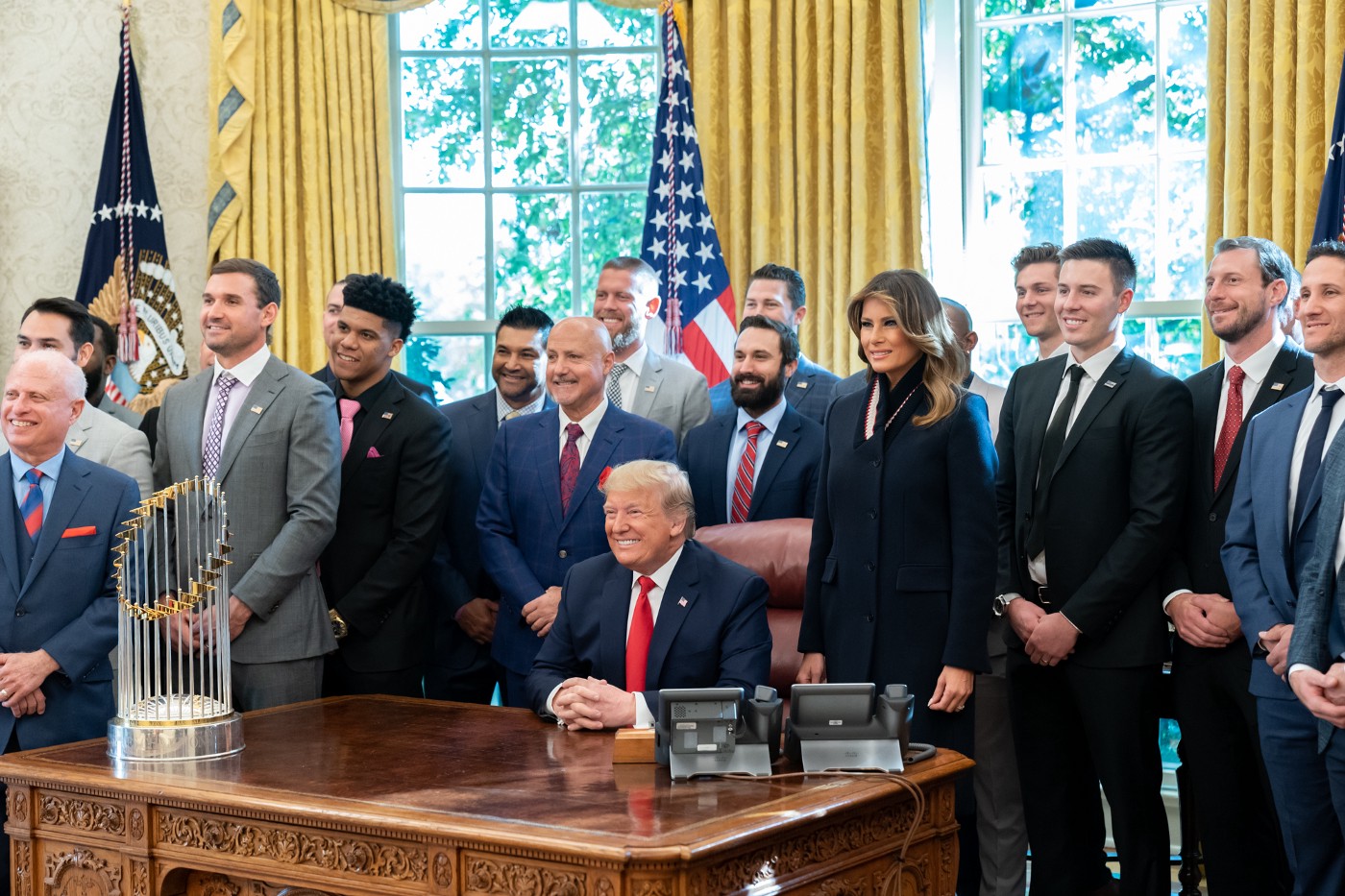 Kendrick did not disappoint. His home-run brought the score to 3–2. And suddenly, the Nationals were ahead.

When Howie Kendrick followed Rendon to bat and swung for the fences, his resulting home run sent Washington Nationals fans into hysterics at watch parties throughout D.C.

In a single inning, their home team was poised to win the World Series. 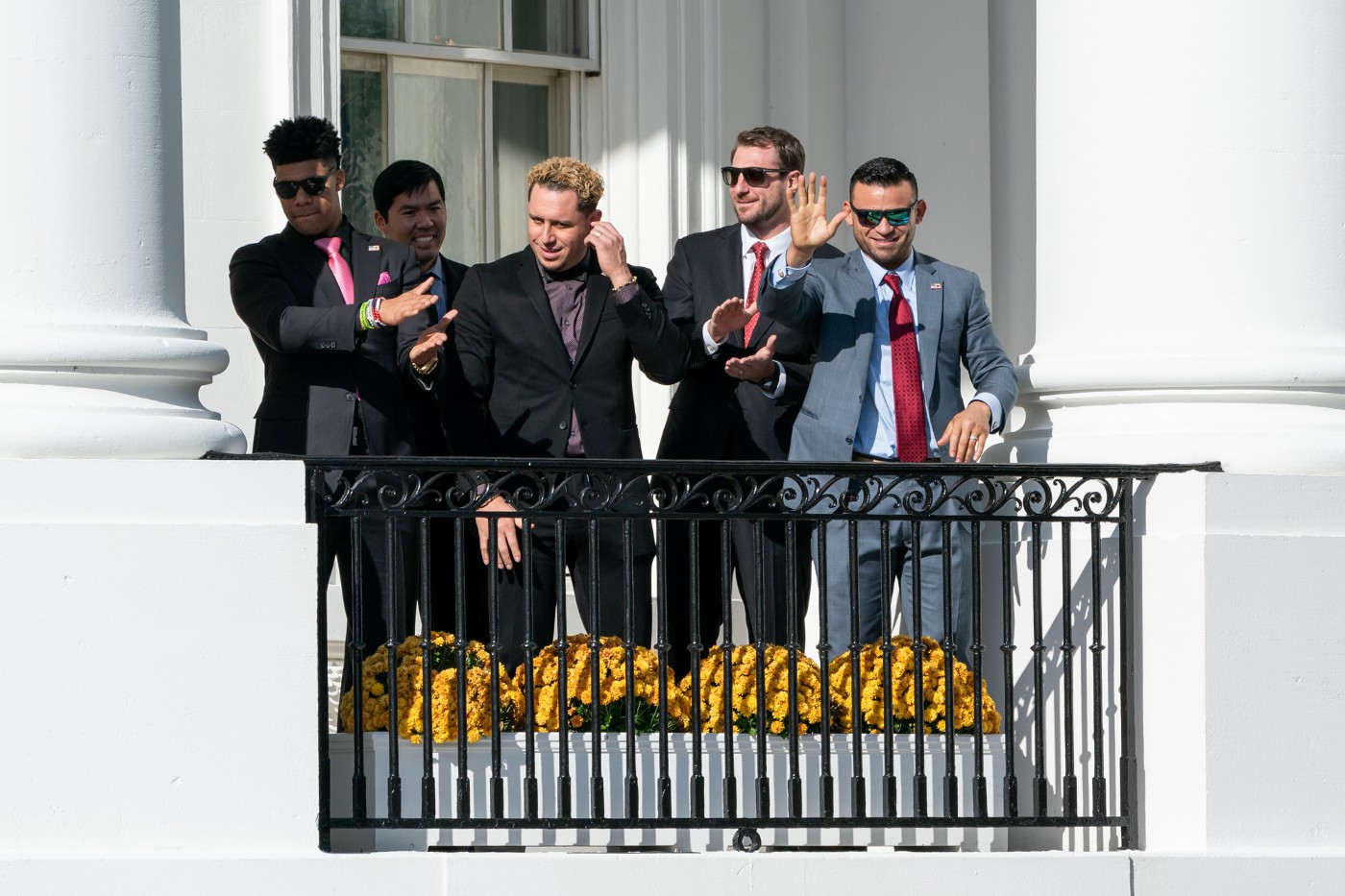 In the end, Washington’s Nationals gave the fans at home something to cheer about when they beat the Houston Astros 6–2 in game seven of the 2019 World Series.

The Washington Nationals were greeted enthusiastically by a crowd of over 5,200 people at the White House as they were honored for their victory on Monday.

The White House Marine Band roused the record-breaking crowd with a spirited rendition of “Baby Shark”, the theme song unexpectedly but unanimously chosen by Nationals players and fans during the 2019 season. 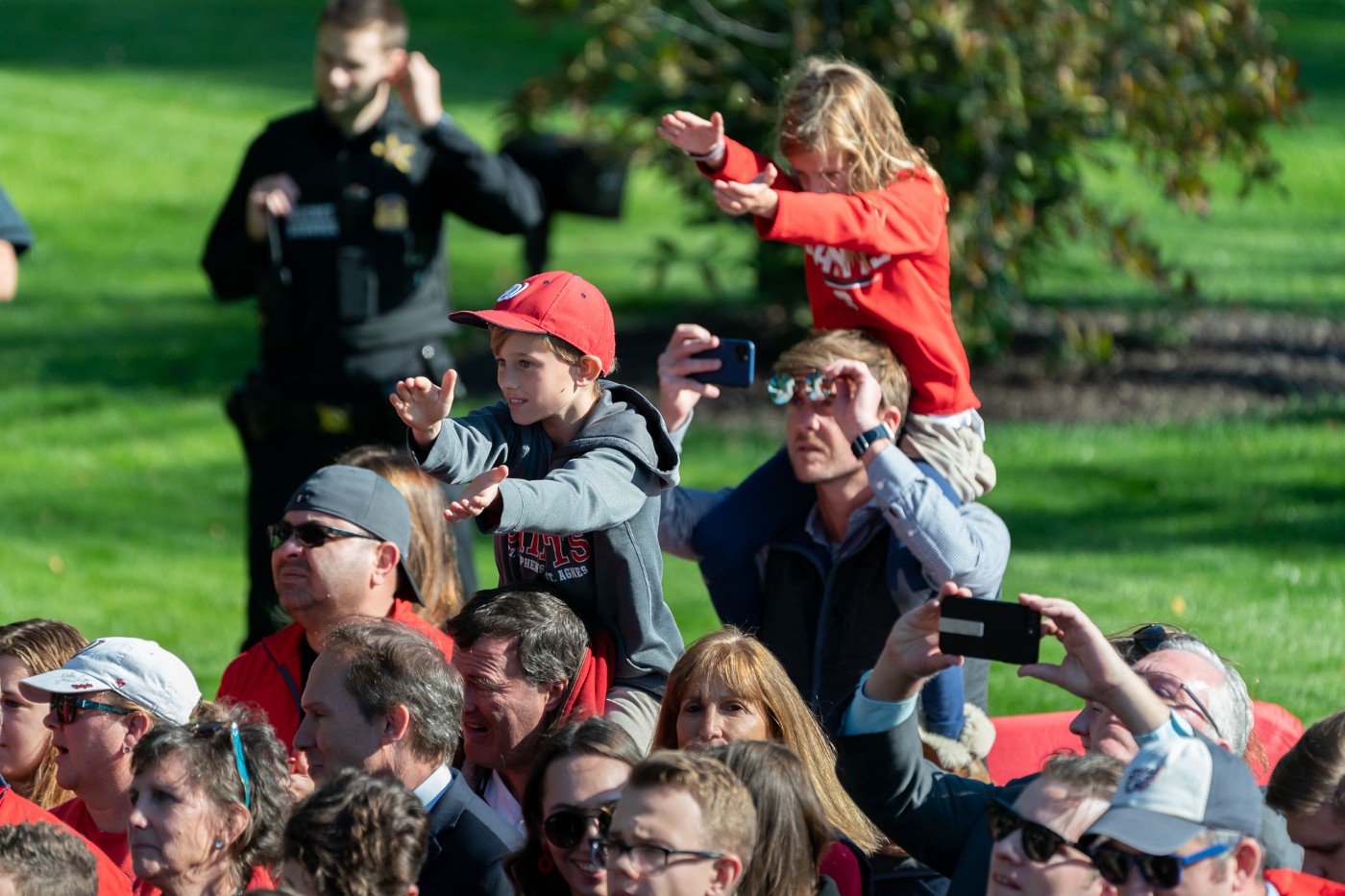 The song was introduced to the team by popular outfielder Gerado Parra after he chose it as his walking-up-to-bat tune in homage to his baby daughter.

“It became the anthem for the Nats fans everywhere. That turned out to be a very, very powerful little tune.” — President Donald Trump said during the event 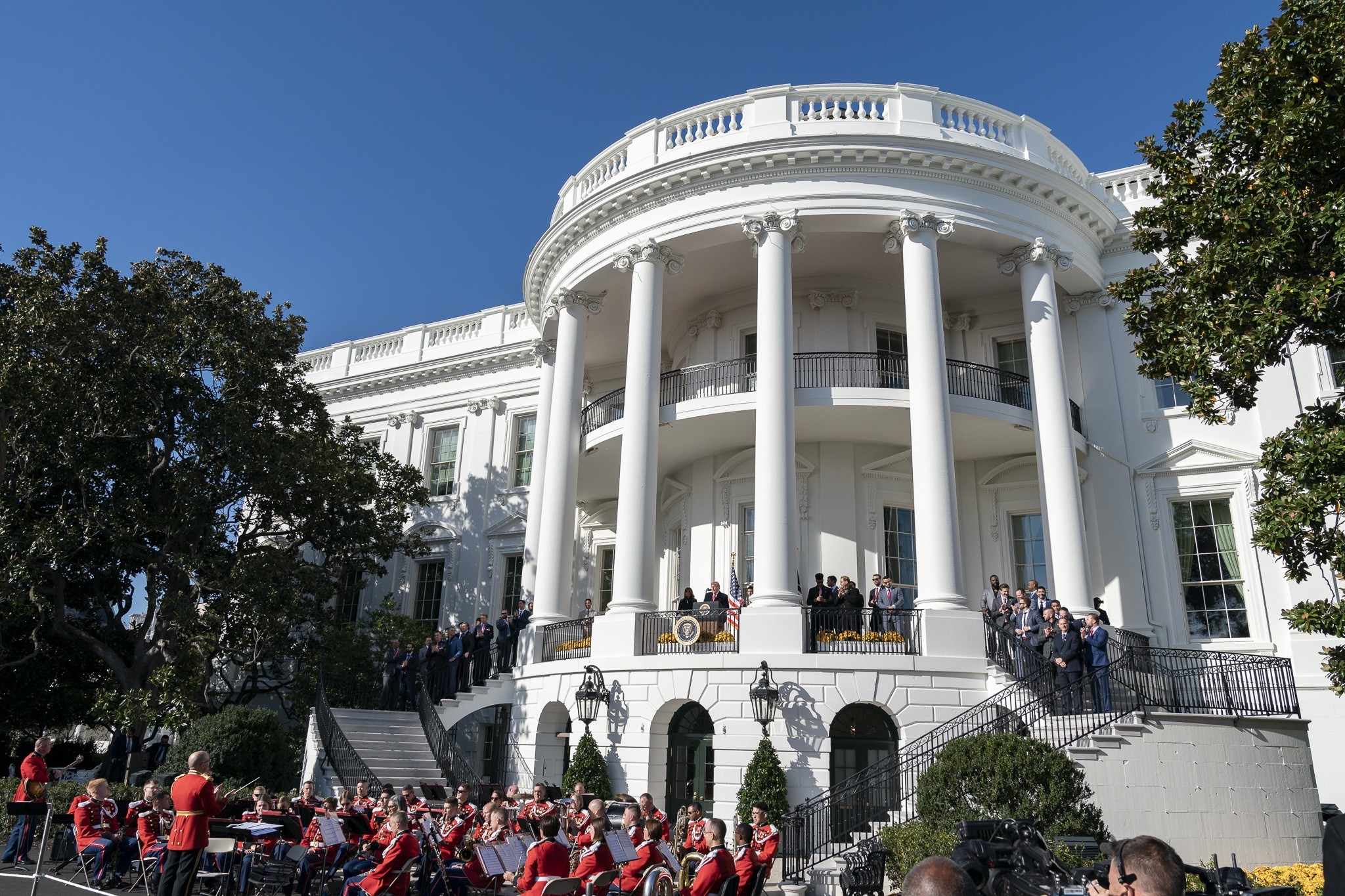 Not every Nationals player accepted the President’s invitation to visit the White House, however.

“There’s a lot of things, policies that I disagree with, but at the end of the day, it has more to do with the divisive rhetoric and the enabling of conspiracy theories and widening the divide in this country.” — Pitcher Sean Doolittle, to the Washington Post 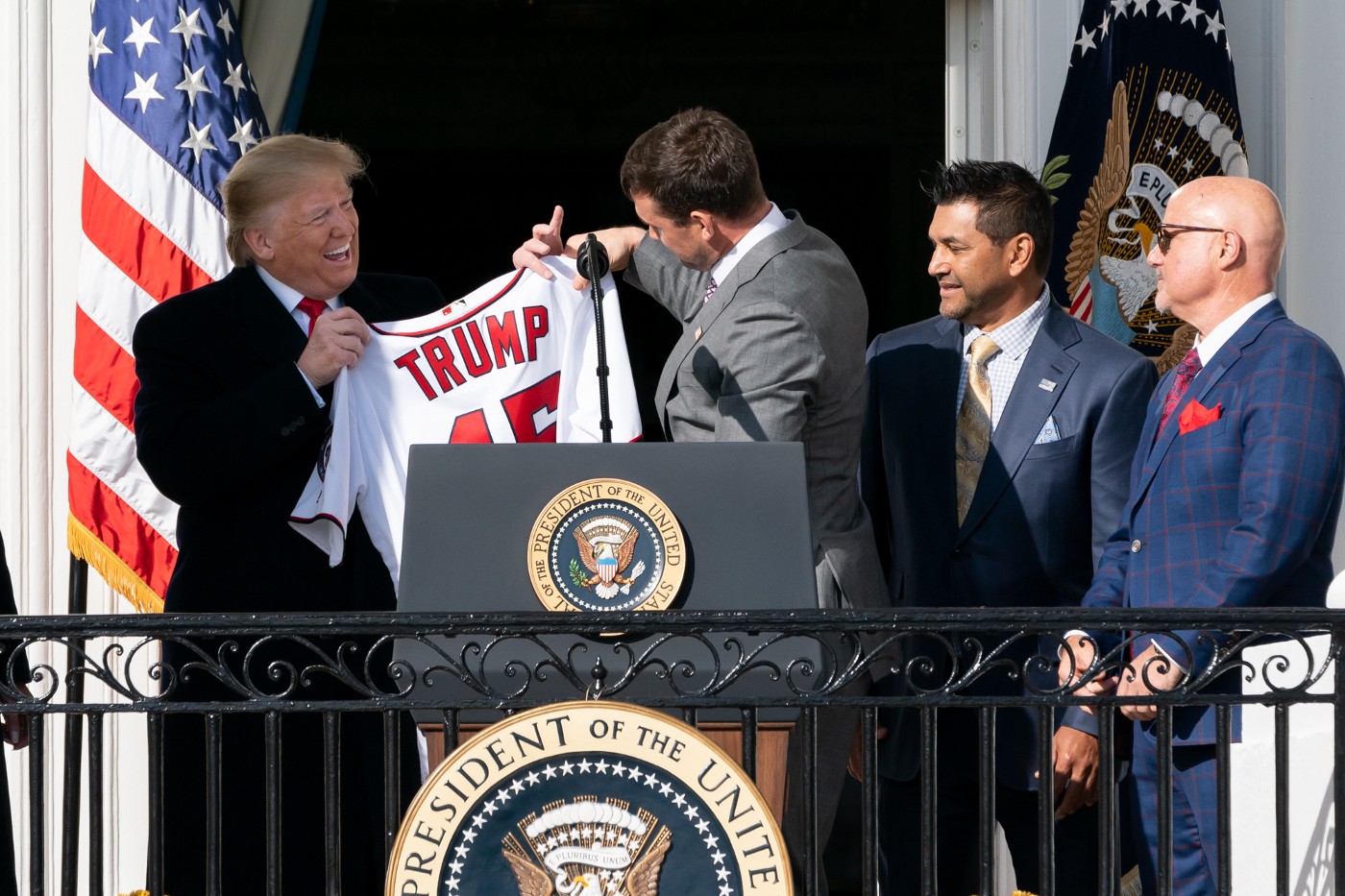 “This is an incredible honor I’d like to think none of us will ever forget. We’d also like to thank you for keeping everyone here safe in our country and continuing to make America the greatest country to live in in the world.” — Ryan Zimmerman, first baseman. 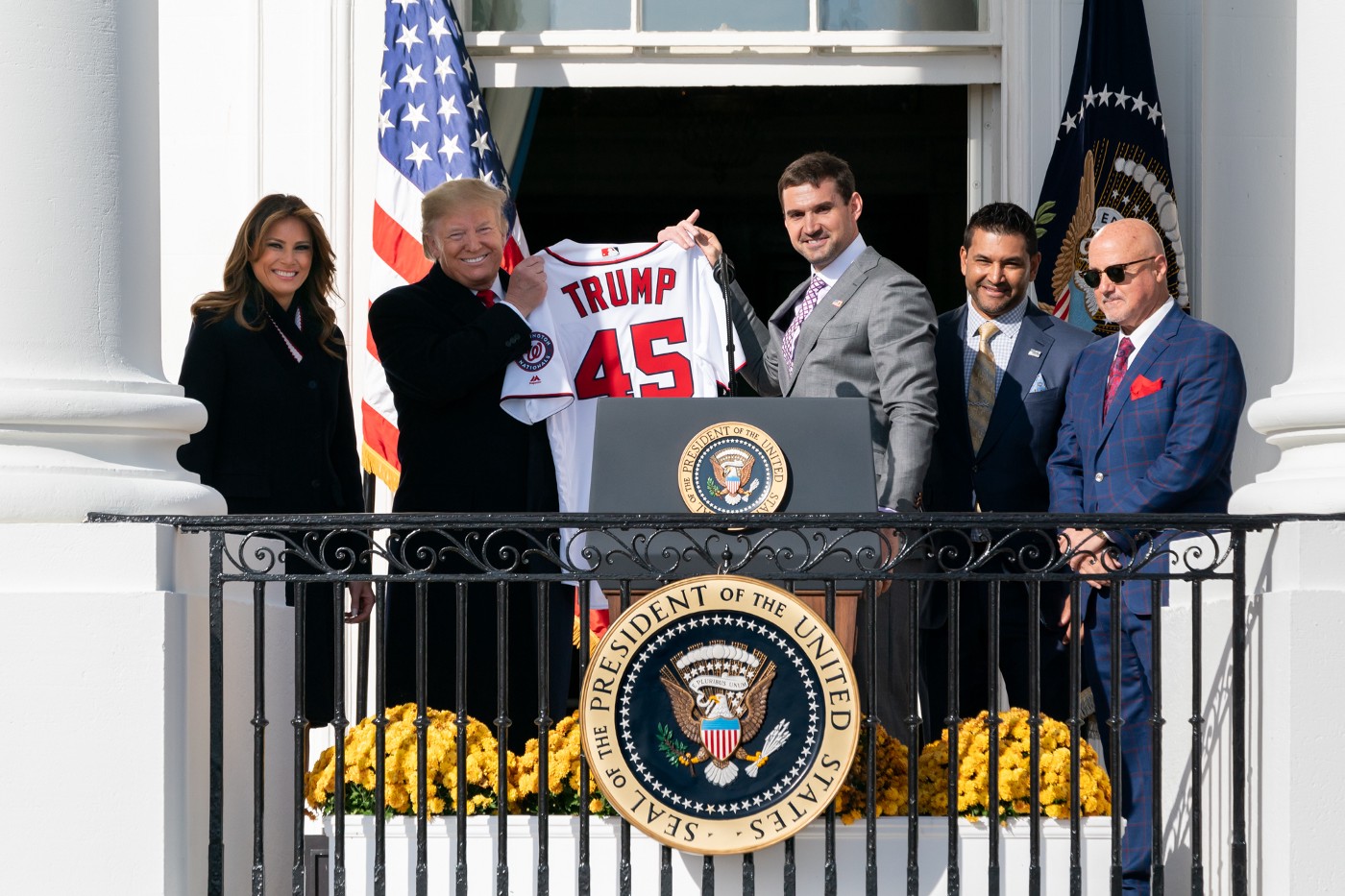 Next, a President clearly surprised and overcome with gratitude awkwardly hugged catcher Kurt Suzuki after Suzuki unexpectedly donned a “MAGA” hat at the podium.

The gesture was not lost on the liberal Twitterati, who have been braying for Suzuki to be barred from baseball ever since.

For his part, Kurt Suzuki dismisses the backlash, accusing critics of over-politicizing everything.

“It was amazing. That was the president. Just trying to have some fun. Everybody makes everything political. It was about our team winning the World Series.” — Kurt Suzuki, catcher 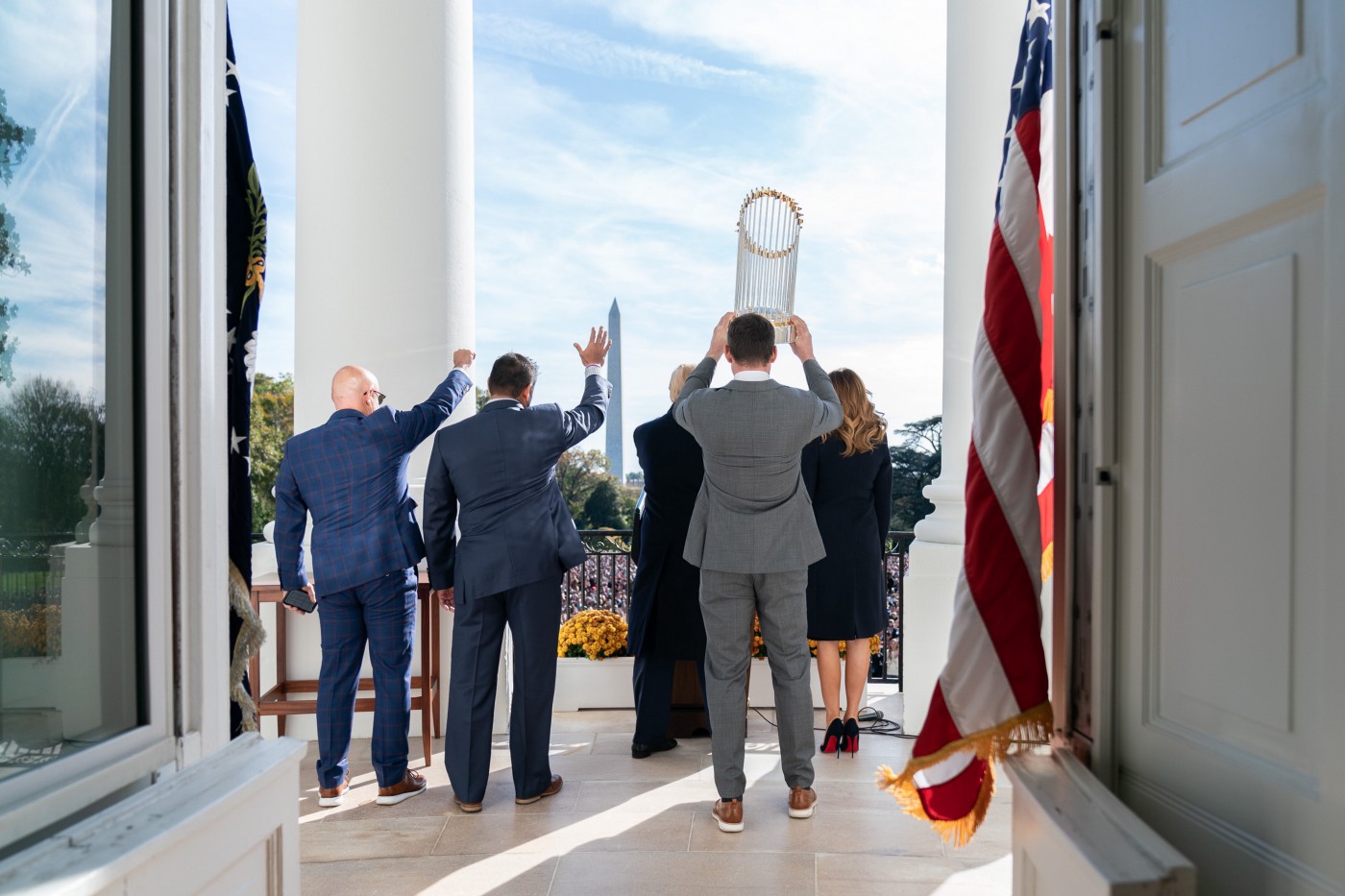 Politics aside, the Washington Nationals have given D.C. something to be proud of and the team has certainly earned a special place in the heart of a grateful nation with their talent, camaraderie and class.