Concerns about community safety may trump everything else. 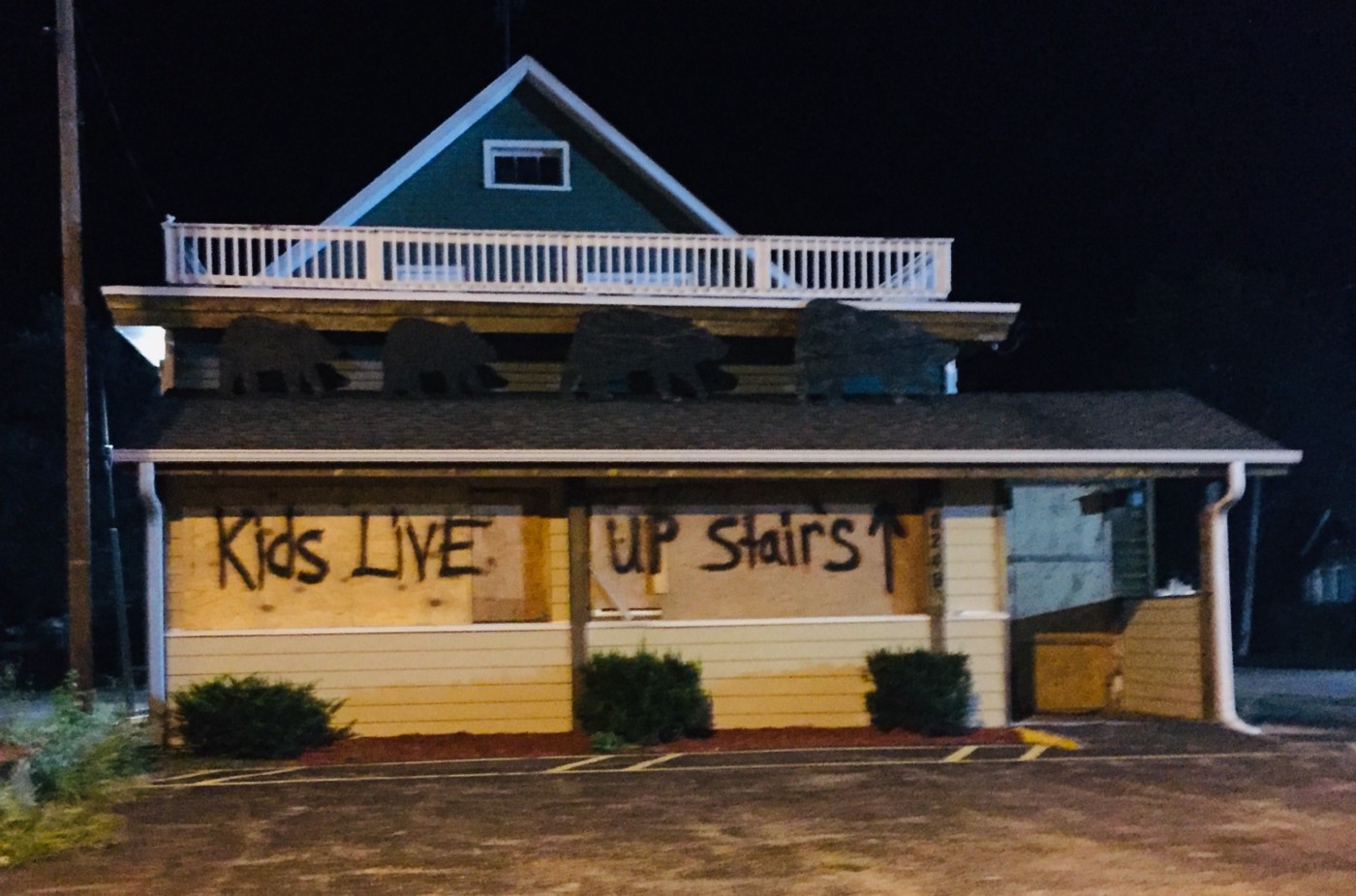 Virtually All Businesses Boarded Up In Anticipation Of A Riot. Messages were painted on the boards to discourage the rioters from damaging their building. August 25, 2020. (photo: *Hajee)

Six months ago, the threat of violence to public safety wasn’t even a polling question. Two weeks ago, 59% of polled voters listed it as one of their top concerns.

As Trump climbs in the polls, alarms are sounding on the left, perhaps too late: “Law-and-order concerns will drive voters to Trump.”

“Burning and looting in the name of justice will hand election to Trump,” agrees California’s Willie Brown: “The biggest threat to a Democratic election sweep in November isn’t the Republican in the White House, but the demonstrators who are tearing up cities in the name of racial justice.”

“How Chaos in Kenosha Is Already Swaying Some Voters in Wisconsin: As residents see fires and looting, some worry that local Democratic leaders are failing to keep control of the situation,” warns the New York Times.

Michigan Rep. Debbie Dingell (D)- who famously warned the Clinton campaign that it was in danger of losing Michigan in 2016- is warning her fellow Democrats again now that lack of support for police officers and tolerance of violence is putting Michigan at grave risk, whatever the polls may say to the contrary.

“Rioting and lawlessness is evil. And any civil authority that permits, condones or dismisses violence, looting and mayhem in the streets disqualifies itself from any legitimacy. This comes first. If one party supports everything I believe in but doesn’t believe in maintaining law and order all the time everywhere, I’ll back the party that does. In that sense, I’m a one-issue voter, because without order, there is no room for any other issue.” — Andrew Sullivan, “The Trap The Democrats Walked Right Into: If law and order are what this election is about, they will lose it.” August 28, 2020.

The above sentiment from an author who, by his own admission, “was mocked for saying that I believed that the election of Donald Trump was an extinction-level event for Democracy.” If someone who believes that, “If Biden wins, we may have one last chance for the center to hold- and what few hopes I have rest on this,” feels this strongly about law and order, how do undecided voters feel?

With this troubling question obviously in mind, the Democratic Party is suddenly finding itself on shifting electoral ground this week. After repeatedly dismissing the increase in violence, and the violence which has accompanied many of the protests, as a Republican talking point for months, high-profile Democrats have shifted en masse to blaming the violence on Donald Trump.

Democrats are missing a key piece of data, and it is likely to hurt the party on Election Day unless Democratic strategists can convince top Democrats to change course.

Democrats accept as fact that the video of George Floyd being knelt on by a police officer for seven minutes changed the national conversation about policing in America, virtually overnight.

The killing of unarmed persons by police officers has been going on for years. Law enforcement officers nationwide kill about 1,000 people a year, every year. Yet, the video of George Floyd, and the video of Jacob Blake being shot seven times in the back, is what is igniting communities into action.

Photos and videos of violent protests will be just as powerful.

The violence, arson, and looting which has been taking place in major cities during the protests over the past months could have just as much power to sway hearts and minds.

A picture, as they say, is worth a thousand words. A video is worth even more.

Expecting that voters- especially undecided, independent voters- will watch and abhor the two videos of George Floyd and Jacob Blake, but not watch or abhor any of the thousands of videos depicting violence during the riots, is utterly illogical.

Everyone is a photojournalist and videographer now. Everyone has a portable, high-quality sound studio in their pockets. From Portland protestors shooting a man in the head to angry mobs of masked BLM protestors confronting outdoor diners in D.C.; the entire 2020 “Summer of Love”, as Seattle’s Mayor Jenny Durkan called it, has been captured on candid camera.

Indeed, some of the “protestors” who accosted terrified Republicans leaving the RNC convention in D.C. last week, surrounding and menacing Sen. Rand Paul and former Georgia legislator Vernon Jones among others, were considerate enough to film themselves.

These protestors seem convinced of their moral righteousness. Will undecided voters, upon viewing such behavior, be thus convinced?

During the Civil Rights Era, one of the key things that made nonviolence such a profoundly effective tactic was the sympathy it invoked in witnesses. White Americans seeing photos of composed, dignified African-American students carrying books and staring straight ahead while a crowd of angry White people menaced them were moved to support the Civil Rights movement.

Will Sen. Rand Paul’s terrified eyes and shouts of “We’ve got Rand Paul cornered over here!” invoke the same sympathy?

Sen. Rand Paul, it should be noted in all fairness, is the recent author of the Justice for Breonna Taylor Act, a piece of legislation aimed at ending the types of dangerous “No-knock” warrants which cost so many people, including Breonna Taylor, their lives.

It has been pointed out that, in spite of their best intentions, these protestors may be creating more support for Donald Trump. Recent polling seems to indicate this may be the case.

Cooler heads in the Democratic Party have been sounding the alarm about the violence, and the damage it is doing to Democratic chances in November. The fact that Democrats have now abruptly changed their message, admitting that there has been violence, seems to indicate that arson, looting and vandalism has not helped Joe Biden.