Is it open season on Christianity? 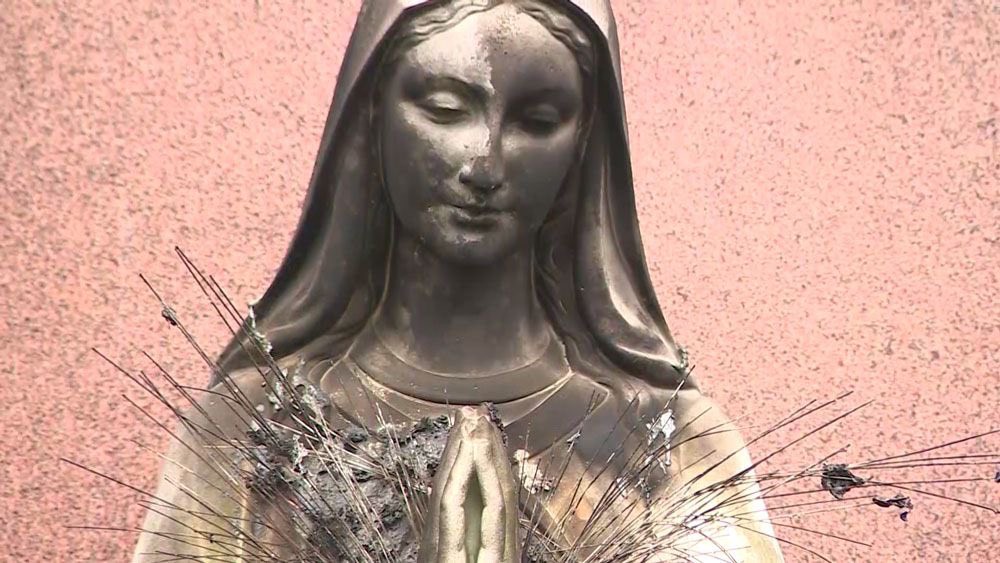 Virgin Mary statue at St. Peter’s Parrish in Boston, Massachusetts, which was damaged by fire on July 12, 2020. (photo: The Catholic Connect Foundation)

Catholic churches and Christian symbols across the United States have been burned and vandalized recently in a series of attacks. Authorities are investigating whether or not these incidents are connected to the protests targeting symbols and statues.

Black Lives Matter leaders, activists and protesters have called for the toppling of statues of Confederate symbols, former U.S. presidents, and abolitionists.

Last month, BLM activist Shaun King was the first to prominently call for all images depicting Jesus as a “White European,” and his mother to be torn down because they’re forms of “White supremacy,” and “racist propaganda.”

“Yes, I think the statues of the white European they claim is Jesus should also come down. They are a form of white supremacy. Always have been. In the Bible, when the family of Jesus wanted to hide, and blend in, guess where they went? EGYPT! Not Denmark. Tear them down.” — Shaun King, Twitter. June 22, 2020.

King added support for taking down all imagery, including “murals and stained glass windows of white Jesus.”

“Yes. All murals and stained glass windows of white Jesus, and his European mother, and their white friends should also come down. They are a gross form white supremacy. Created as tools of oppression. Racist propaganda. They should all come down.” — Shaun King, Twitter. June 22, 2020.

CNN Host Don Lemon joined the fray, receiving widespread criticism for saying, “Jesus Christ…if that’s who you believe in, Jesus Christ, admittedly was not perfect when he was here on this earth.”

Dr. Robert Jeffress, the pastor of a 14,000 member First Baptist Church in Dallas Texas, told Fox News that “Don Lemon’s comments are, first of all, heretical and it contradicts the most basic tenet of the Christian faith and demonstrates how tone-deaf the left is to faith issues.”

Although there does not appear to be a clear connection between the recent incidents, authorities are concerned that religious institutions might be targeted as a result of the statues being targeted, and the escalating rhetoric from activists and protestors.

Various commentators and worship leaders on social media have called out the lack of mainstream coverage of the spate of incidents. Sean Feucht, a California worship leader and pastor, commenting on the incidents asked, “Where’s the outrage?”

On July 11, A Florida man named Steven Anthony Shields crashed his vehicle into the Queen of Peace Catholic Church as it prepared for morning Mass and set the building on fire with parishioners inside, the Marion County Sheriff’s Office reported.

Shields, 24, was arrested and charged with attempted murder, arson, burglary and evading arrest. He admitted his crimes to investigators, smiling and showing no remorse, describing what he did as “awesome” and that he was on a “mission.”

On July 11, a 249-year-old San Gabriel Mission Church in the archdiocese of Los Angeles went up in flames.

The church was seriously damaged and the cause of the fire is still under investigation.

On July 11, a statue of the Virgin Mary was set on fire outside the St. Peter Parish at 10 pm. The flowers in the hands of Mary, the mother of Jesus Christ, were set on fire, damaging her arms and face.

Pastor John Currie told the local news he “was shocked” to hear the news of the statue, which was put up decades ago in memory of World War II veterans.

On July 10, a statue of the Virgin Mary was vandalized in New York City at the Cathedral Prep School and Seminary in Queens. The police are investigating the incident during which the statue had “IDOL” spray-painted on it at 3 am., the Catholic News Agency reported.

Other Church Incidents within the past month

Calvary Baptist, a historically Black church in San Diego, which has become a “multicultural faith community” in recent years, had a “suspicious” church fire that is being investigated by the departments Metro Arson Strike Team, the San Diego police officials said.

On July 10, a fire destroyed Faith Tabernacle Pentecostal Church in Elkmont, Alabama. The cause of the fire is unknown, and is under investigation by the Limestone County Sheriff’s Office.

An arson investigation is underway after the 100-year old Harmony Baptist Church in Johnson County, Missouri was set on fire on July 5.

America has always been a country that prides itself on the freedom of all religions. The burning and desecration of modern churches cannot be tolerated, let alone encouraged on social media by trusted and respected leaders.

The hateful rhetoric that has resulted in these crimes has crossed a line. The deafening media silence over the attacks suggests a double standard of newsworthiness when intolerance is directed towards Christians and/or Catholics.

Persecution of Christians is an issue worldwide and has remained a threat even during the novel coronavirus pandemic in countries such as India and Iran, and across the continents of Asia and Africa.

Earlier this week a Turkish court annulled the world-famous Hagia Sophia’s museum status, declaring its use as anything other than a mosque, “not possible legally.”

Hagia Sophia was built as a Christian cathedral nearly 1,500 years ago and turned into a mosque after the Ottoman conquest of 1453. Under Turkish Republic founding father Ataturk, the Unesco World Heritage Site became a museum in 1934.

The move comes as the Christian faith is being targeted in the United States, as attacks increase against monuments and churches increase, and as living conditions have worsened for Christians around the world during the coronavirus pandemic.

Greece and the United States have voiced their disappointment at Turkey’s decision. Religious and political leaders worldwide have criticized the move to make Istanbul’s Hagia Sophia, known for its Christian origin and being the nation’s most popular tourist site, into a mosque.

The Hagia Sophia is a UNESCO World Heritage site, and the group says it deeply regrets the decision made by Turkish authorities, without prior discussion.

“Hagia Sophia is an architectural masterpiece and a unique testimony to interactions between Europe and Asia over the centuries. Its status as a museum reflects the universal nature of its heritage, and makes it a powerful symbol for dialogue,” said Director-General Audrey Azoulay.

Pope Francis has said he is “pained” by Turkey’s decision to convert Istanbul’s Hagia Sophia back into a mosque.

“My thoughts go to Istanbul. I think of Santa Sophia and I am very pained,” the Pope stated.

Konstantin Kosachev, chairman of the Foreign Affairs Committee of the upper house of the Russian parliament, has warned Turkey that it “will be seen as a violator of religious balance in the eyes of the whole world.”

Patriarch Kirill, the leader of Russia’s Orthodox Church, home to the world’s largest Orthodox Christian community, has relayed the same sentiment, saying that “A threat against Hagia Sophia is a threat to all of Christian civilization, meaning (a threat to) our spirituality and history.”

The World Council of Churches has called on President Erdogan to reverse the decision.

In the wake of these troubling trends, will the press, Democratic politicians, and prominent media figures like Shaun King condemn the criminal attacks against U.S. churches?