Upheaval in Columbia, Peru and Nicaragua Test the Biden Admin

How will the U.S. respond? 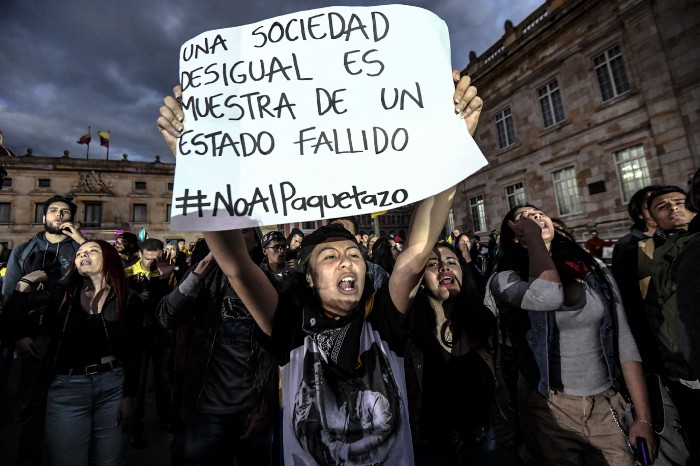 Things have been heating up in the Western Hemisphere this summer. As the war in Afghanistan draws down, Biden’s administration will have to shift focus to the growing tensions in Central and South America.

Pivoting away from an isolationist policy, the U.S. might do well to turn its sights on its own backyard. Attacks in Colombia, a tense election in Peru, and crackdowns in Nicaragua — President Biden has a lot on his plate.

What will it mean for the future of U.S. foreign policy?

Here is the rundown:

The June 15 car bomb attack on a military base with U.S. military present shocked both the U.S. and Colombia. The base is located on the border with Venezuela and therefore in a high-risk area.

Another attack occurred when Colombian President Iván Duque’s helicopter was shot at near the Venezuelan border. Both attacks are as yet unclaimed, but Colombian authorities suspect members of the leftist groups Revolutionary Armed Forces of Colombia (FARC) or the National Liberation Army (ELN) attacked the helicopter.

In 2016, a peace deal was finally signed with the FARC after more than 50 years of fighting. However, only 44 percent of the former FARC fighters have received the economic aid promised to them in the peace agreement. The lack of financial support is fueling speculation of disgruntled ex-guerilla fighters struggling economically and potentially taking up arms again.

The widespread anti-government protests have cast a dark shadow over Duque’s presidency. Much of the country has demonstrated against increased taxes, widespread violence, and the worsening economic situation over the past years.

The COVID-19 pandemic only worked to exacerbate these tensions and the risk of instability in Colombia is a major blow to a strong U.S. ally in the region.

Peru has finally declared Pedro Castillo, a Marxist and a former schoolteacher, as the winner of the presidential election. Castillo defeated right-wing candidate Keiko Fujimori, whose father, Alberto Fujimori, is the former president of Peru and is currently jailed for human rights abuses.

Keiko Fujimori claims election fraud, despite international observers claiming the elections to be free and fair.

There has been evidence of bribery in an attempt to swing the election to Keiko Fujimori, however. Former ex-spy chief, Vladimiro Montesinos was caught attempting to bribe officials to switch votes for Fujimori, despite Montesinos currently being in jail serving time for corruption and arms trafficking. Montesinos perviously served under Alberto Fujimori.

President Daniel Ortega is cracking down on journalists and his political opponents, many of whom have fled the country in order to avoid being arrested and jailed.

Luis Carrión, a former Sandinista commander who fought with Ortega, fled upon hearing of his arrest. He said that Ortega kidnapped his opponents to “serve as political hostages to negotiate the lifting of sanctions with the United States.”

The U.S. Department of the Treasury has stated that the Ortega regime is one that, “has undermined democracy, abused the human rights of civilians, enacted repressive laws with grave economic consequences, and tried to silence the independent news media.”

These events will be a serious test for Biden’s administration and for U.S. foreign policy.

Trump’s policy was notable for how it changed course from the previous administration’s policy in the region. Biden’s administration should look for a reset in relations, given the long and patchy history of U.S. interventions.

The result of decades of interfering has been the rise of narco-terrorism and authoritarian regimes, plus the collapse of democracy in the region. Many of the migrants leaving Central America for United States do so because of the corruption, gang violence, and poor economic situations ravaging their countries.

The U.S. should continue to be a supporter of democracy and assist democratic institutions throughout the region. A hands-off approach might be nice, but the U.S. has an obligation to secure its backyard- specifically from any Chinese and Russian influence.

Back in 2018, Russia sent two nuclear-capable strategic bombers to Venezuela, a stern warning against any U.S. meddling with Russia’s allies in the Maduro regime. Preventing the presence of a foreign military in Latin America is something deeply ingrained in the U.S. foreign policy psyche, dating back to the Monroe Doctrine.

The U.S. needs strong allies in the region. Colombia is an important partner to the U.S., especially given the cold relations between the U.S. and Venezuela. Columbia’s proximity to Venezuela makes it a hotspot, but also a key strategic ally of the U.S.

The U.S. has already placed sanctions on Nicaragua, but how much pressure will the U.S. put on Ortega? Predicting how the situation will unfold is difficult. But as Ortega jails opponents and journalists, it is increasingly clear that having another authoritarian demagogue in Latin America is detrimental to democratic efforts in the region.

Peru’s election reflects the people’s choice, but the U.S. has historically not been very supportive of leftist governments. There are also fears that Peru’s democracy will erode, given how fragile it currently is and how polarizing the recent election was. Castillo will be Peru’s fifth president in five years, demonstrating that Peru has been dealing with a potent political crisis for quite some time.

The U.S. would be wise to ensure a smooth transition and provide support for the Peruvian economy. Protecting Peru’s fragile democracy and avoiding the risk of resurgence from the Shining Path should also be top priorities.

Latin America has always had a tumultuous relationship with the U.S. The Cold War only heightened tensions and fears of a Soviet takeover, fueling CIA operations and often misguided interventions.

There is no changing the past, but the U.S. can improve its standing in the region by reinforcing the principles of democracy and supporting it, wherever it grows.