Further confounding polling experts, Trump has managed to entice African-American, Latino and Hispanic-American voters away from the Dem Party. 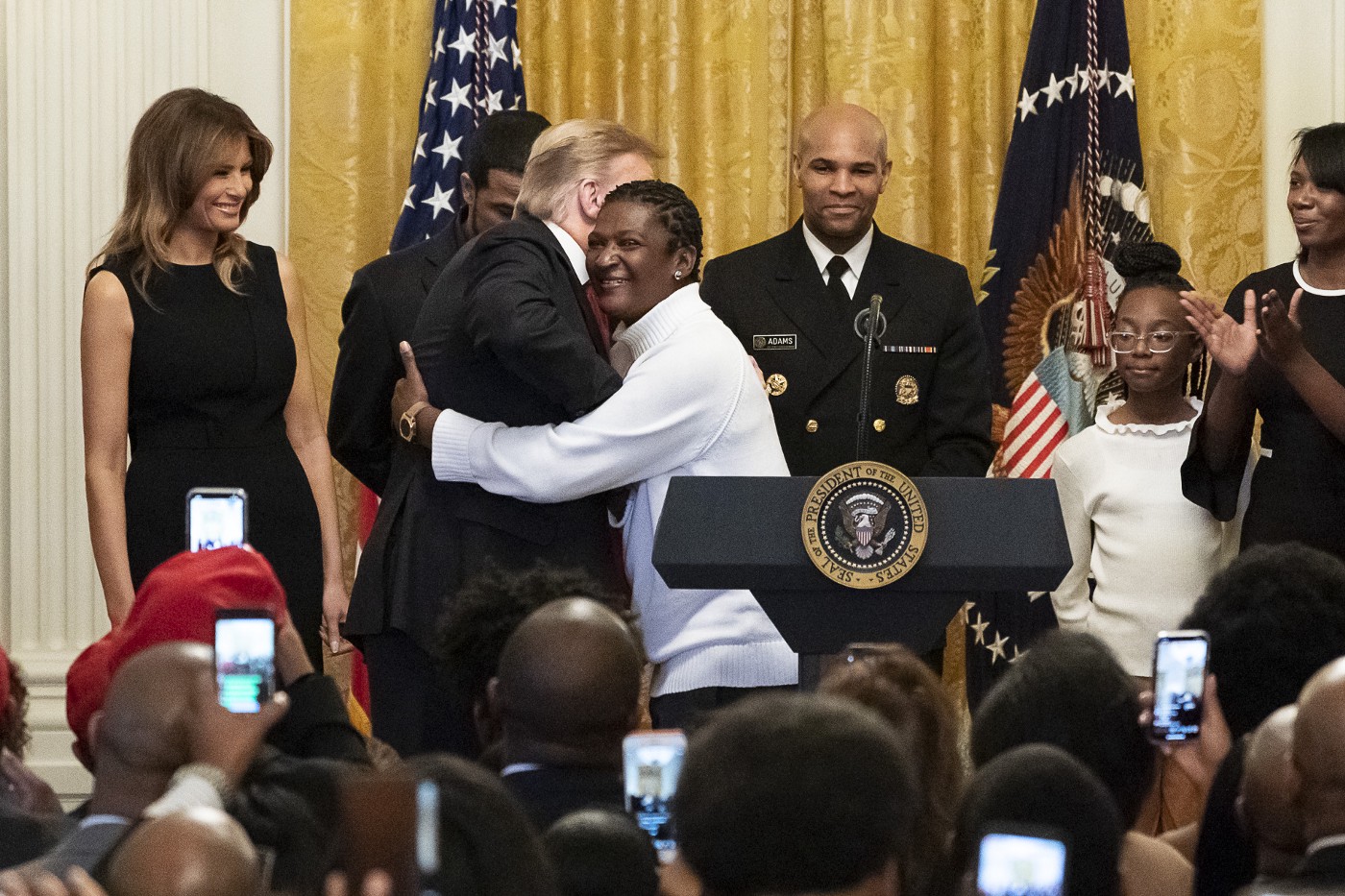 President Donald J. Trump embraces Catherine Toney after she delivered remarks at the African American History Month Reception Thursday, Feb. 21, 2019, in the East Room of the White House. Toney was one of the first women released under the First Step Act. (Official White House Photo by Andrea Hanks)

“For those Black young men who think somehow they can align themselves with Trump, not only are they terribly mistaken, any of them showing their face, I will never, ever forgive them for undermining the possibility to help their own people and their own communities,” Waters said in a SiriusXM interview. “It is absolutely unconscionable. It is shameful.”

“He’s a racist. He does not have any appreciation for Black people and Black women in particular,” she continued. “He has no respect for us. He is not doing anything for us.”

Waters went on to say that the president has emboldened white supremacists and KKK members and that if he ends up winning again, this country would “go backwards”.

“It just hurts me so bad to see Blacks talking about supporting Trump,” she said. “I don’t know why they would be doing it. I don’t know what’s on their minds, but if we don’t turn out this vote, and turn it out huge, this man could end up winning again. And this country would go backwards,” Waters said.

“The divisiveness that this deplorable human being has caused, the confrontation, the dog-whistling to the right-wing, the white supremacists, the KKK, and they’re coming alive,” she added. “They’re emboldened because they’ve got a leader who wants them to do it. What did he say to the proud boys? Stand back and stand ready? Ready for what — confrontation? Give me a break, Joe. I thank you. I know you’re on it, doing everything that you can. We’ve got to shout it from the rooftops — vote, vote, vote.”

She didn’t stop there- Waters then attacked young Black men for their social media posts about “women” and “cars,” and said they will have a “price to pay for years to come if they help put Trump over and help get him elected.”

“They will go down in history as having done the most despicable thing to their families and to their communities and to their mothers and their grandmothers,” she warned ominously.

So Black men will have a “price to pay” for not voting for Democrats? Diversity of thought should be celebrated amongst all Americans, regardless of skin color, not threatened. Sadly, many Democrat voters, celebrities, and even politicians agree with Waters’ assessment.

Multiple rappers, mostly Black, have shown support for Trump in the past few weeks. Lil Wayne, Lil Pump and 50 Cent have all endorsed President Trump, though 50 Cent later walked-back his statement. Ice Cube has not endorsed the president, but mentioned working with the administration to address issues concerning racial inequality.

After rapper 50 Cent, whose real name is Curtis Jackson, announced last Monday that he would back Trump in his re-election effort, Jackson’s ex-girlfriend, Chelsea Handler, gave an interview in which she admitted to “reminding” Jackson, “that he was a black person.”

During her subsequent interview with Jimmy Fallon, Handler asked “You heard about my ex-boyfriend, right?”

“I had to remind him that he was a black person, so he can’t vote for Donald Trump, and that he shouldn’t be influencing an entire swath of people who may listen to him because he’s worried about his own personal pocketbook,” she added.

Handler also offered to pay Jackson’s larger tax bill under the Biden administration and to do “whatever else it took, if you know what I mean,” to change the rapper’s mind about Trump.

Popular “The View” host Joy Behar is coming under fire after her election night comments referring to Supreme Court Justice Clarence Thomas as “Uncle Clarence”. Some viewers of the program are calling for Behar’s dismissal, saying she crossed a line with the racially-charged remark.

Even Democratic Presidential Nominee Joe Biden has made concerning and condescending remarks about Black voters, including during a May interview with “Charlamagne Tha God,” whose real name is Lenard Larry McKelvey. Biden told McKelvey, “If you have a problem figuring out whether you’re voting for me or Trump, then you ain’t black.”

In 2016, President Trump received support from only 6 percent of black voters and 28 percent of hispanic voters, according to Pew Research. There is every sign that Trump has managed to double his support with African-American voters and improve even more significantly with other groups in 2020.

In 2020, 26 percent of Trump’s voting share came from nonwhite voters. Early exit polling data indicates Trump’s support on Election Day 2020 from Latino and Hispanic voters reached between 32 and 35 percent. Even the New York Time’s Paul Krugman- perhaps the most anti-Trump voice at the Times- was forced to admit in its pages that, “[Trump] outperformed the polls in large part with Hispanic and some black voters.”

Democrats may believe they have a monopoly over how Black, Hispanic and Latino voters cast their ballot. The 2020 race indicates that this is not the case.

Like every other demographic group of voters, voters of color just want the best for their communities. Black conservatives believe in different methods to achieve this goal.

Otherwise, whatever happens during this election, the Democratic Party risks conceding its status as the “Big Tent” party- to Republicans.