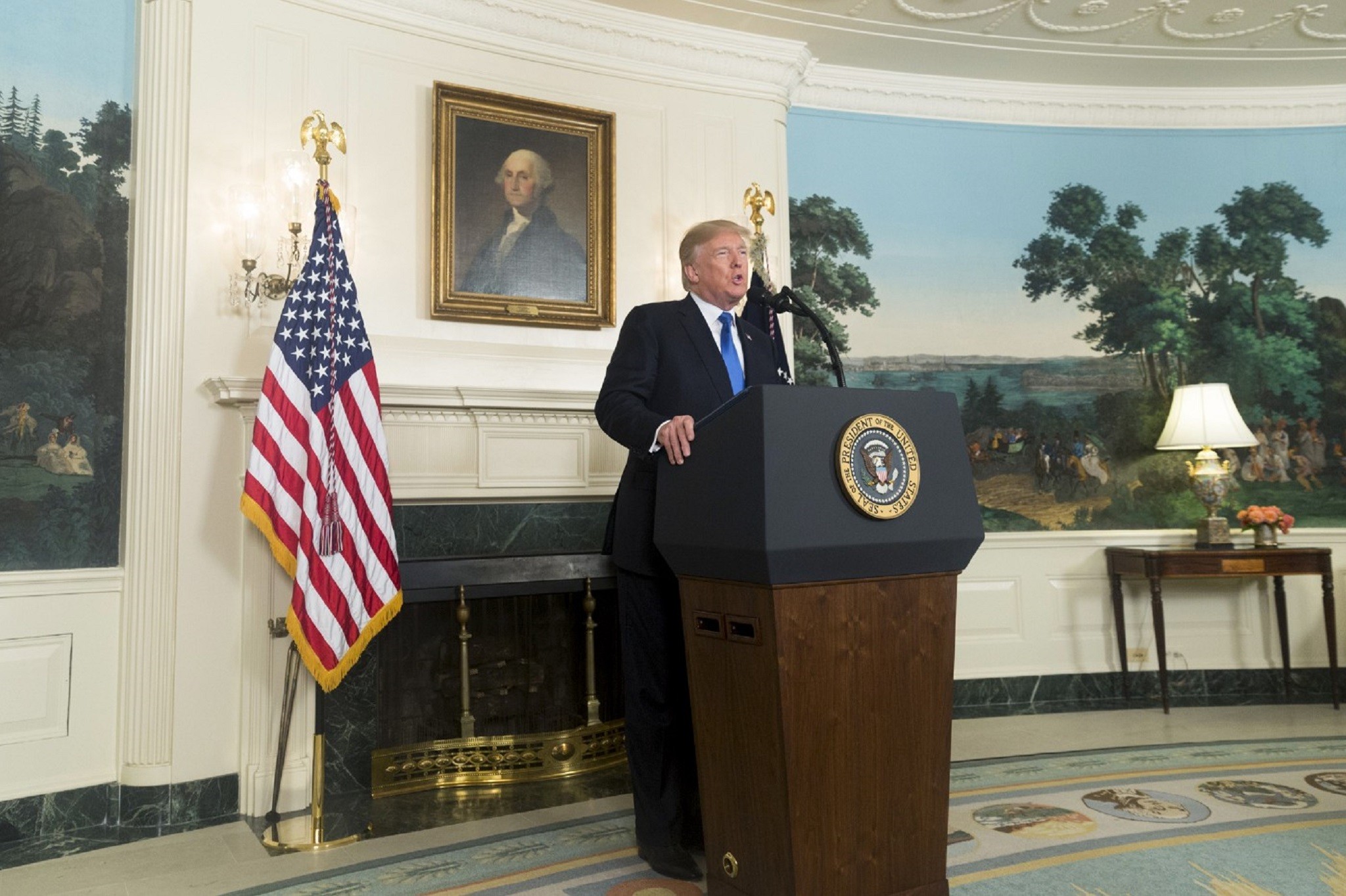 “In this effort, we stand in total solidarity with the Iranian regime’s longest-suffering victims: its own people.” President Trump delivers a speech signaling a harder line on Iran. October 13, 2017.((Official White House Photo by D. Myles Cullen)

“The Iranian regime has funded its long reign of chaos and terror by plundering the wealth of its own people.” — U.S. President Donald Trump

In retrospect, any arm-chair quarterback can see that former U.S. President Barack Obama, though he was adept at many things, did not get U.S. foreign policy quite right on Iran.

While Obama’s vision of a moderate, peaceful Iran willing to cooperate in trade with its neighbors in the Middle East and trading partners in the West, was a good one, it never worked.

Misguided by his dream of a stable Iran, Obama’s decision to recognize Syria as under Iranian authority made perfect sense at the time. It was a huge concession designed, along with a radical rollback of U.S. sanctions, to lure Tehran to the negotiating table on its nuclear aspirations and into a mutually-beneficial financial relationship with the U.S. and its allies.

It was a great idea that simply didn’t work.

In reality, time has told a terrible tale for the Syrian people to the tune of half a million Syrian dead and 10 million more made refugees by the frightening toll Iran has taken on Syria.

In addition, Iran is closer than ever before to becoming a nuclear power. Iran has gone from ‘never getting the bomb’ to ‘getting the bomb in a little over a decade’ since Obama’s disastrous Iran foreign policy.

In Obama’s defense, he was stuck making the best of a bad situation in Iran bequeathed to him by the giant missteps of the George W. Bush administration.

In 2019, Iran is a now an even bigger mess that both administrations have left for U.S. President Donald Trump to clean up.

Turning the Tide on Iran

Under Trump, economic sanctions imposed by the U.S. government have made it all but impossible for foreign countries to invest in Iran.

Sanctions against Iran have been a long time coming, since 2015 as a matter of fact. Before the ink was dry on JCPOA in 2015, Iran was already subverting the agreement, sponsoring terrorist groups and continuing to pursue nuclear bomb technology.

In response to the U.S. shift in foreign policy, Europe has followed suit. Earlier this year, Europe imposed new sanctions on Tehran, freezing the assets of an Iranian intelligence unit and two officials after Netherlands, France, and Denmark accused Iran of plotting to assassinate dissidents in Europe.

Due to crushing sanctions, Iran’s flow of cash to fund terrorism has all but dried up. Iran has less money for terrorism and some of Hezbollah’s fighters have been furloughed, according to insiders.

“We grew up talking about the Palestine-Israel dispute as the most important issue, but then, at a later stage, we saw a bigger challenge, more toxic — in fact the most toxic in our modern history — which came from the Islamic Republic.”

“If it wasn’t for the toxic money, guns and foot soldiers of the Islamic Republic, I think that we would have been much closer today in solving this issue with Israel.” — Bahraini Foreign Minister Khaled bin Ahmed al-Khalifa

Some Sunni Arab countries are more concerned about Iran than any other issue, which puts them on the same side as Israel, a country they have historically shunned — at least in public.

“Building ballistic missiles and giving them to terrorist organizations is unacceptable and there are resolutions that say Iran should be punished for that. Who is supporting Hamas and Islamic Jihad, and undercutting the Palestinian Authority? Iran.” — Saudi Minister of State for Foreign Affairs Adel al-Jubeir

It is easy to understand why more moderate Muslim countries are concerned about the threat posed by an Iran with nuclear ambitions and Iran-sponsored terror. Muslim countries have the most to fear from radical Islam. Terrorist attacks perpetrated by radical Islamists kill more Muslims than any other demographic group.

“Radical Islamic terrorism knows no borders. It targets the United States, Israel, and nations across the Middle East and around the world. It respects no creed, stealing the lives of Christians, Jews, and Muslims.” — Vice President Mike Pence

This week, the White House announced it will hold an economic workshop in Bahrain next month to develop an international plan of incentives to help the Palestinian people, and others.

It is an economic push for peace, a chance for countries to court the economic brass ring of foreign investments and, perhaps, settle the Israel-Palestine question with both sides satisfied if never happy.

“This workshop is a pivotal opportunity to convene government, civil society and business leaders to share ideas, discuss strategies and galvanize support for potential economic investments and initiatives that could be made possible by a peace agreement.” — White House Statement

United Middle Eastern countries in a peaceful trading relationship with one another, with Israel, and with global partners does not bode well for the regime currently enjoying power in Tehran.

Trump’s new policy on peace in the Middle East seems to be ‘Let’s buy it’. Considering other bloodier options that have been tried and have all failed, it might be worth exploring.