The new trade deal addresses trade imbalances and updates the economic relationship between the U.S., Canada, and Mexico for the modern age. 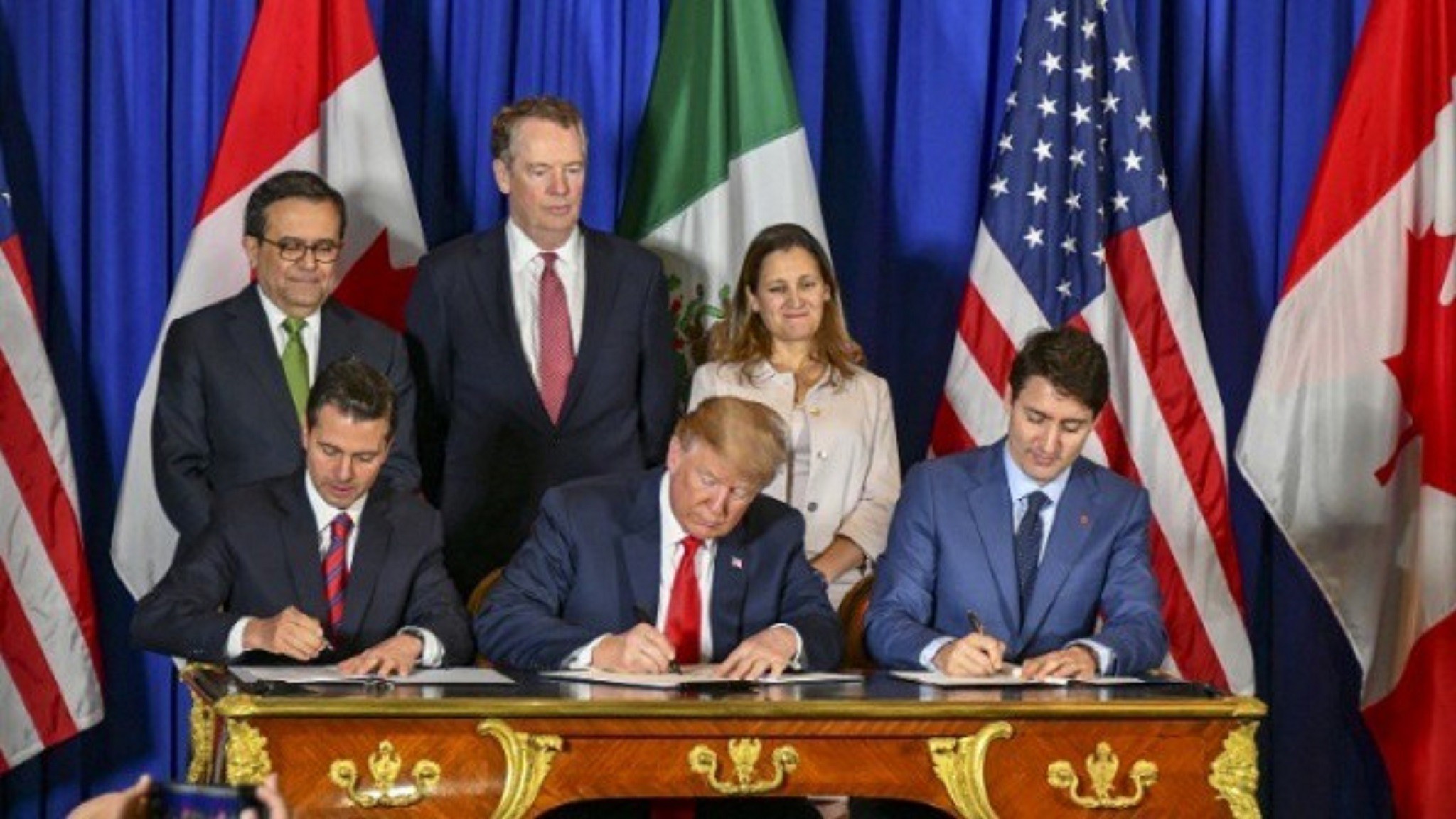 He goes with his gut. He speaks off the cuff. An unwieldy leader; but a leader. Trump may be a horse-trader, but sometimes you need a horse-trader. Crowing over his victory, President Trump credited his hard-nosed negotiation tactics and his willingness to talk tariffs. He also failed to resist the temptation to needle his detractors, including top Republicans.

On the campaign trail, presidential-candidate Donald Trump vowed to renegotiate and replace the North American Free Trade Agreement (NAFTA) if elected President. He referred to NAFTA often as “the worst trade deal perhaps ever made.”

On Friday morning at the G20 Summit in Argentina, President Trump delivered on that promise, joining Canadian Prime Minister Justin Trudeau and former Mexican President Enrique Pena Nieto in signing the USMCA trade agreement after over a year’s negotiations.

In the wake of Trump’s historic upset over Hillary Clinton in the 2016 Presidential election, many pundits and politicos pointed the finger of blame at the left’s outright dismissal of rural voters and failure to understand the struggles of the working class.

For Trump, it seemed, one key to mitigating the rage of the rural, working-class voter was always addressing NAFTA and the impact it has had on small communities all over the country.

“The factories were leaving, the jobs were leaving, people were being fired. We have negotiated this new agreement based on the principle of fairness and reciprocity. To me, it’s the most important word in trade.”

“This new deal will be the most modern, up-to-date and most balanced trade agreement in the history of our country with the most advanced protections for workers.”- President Donald Trump, from the Rose Garden

The new trade agreement promises to: 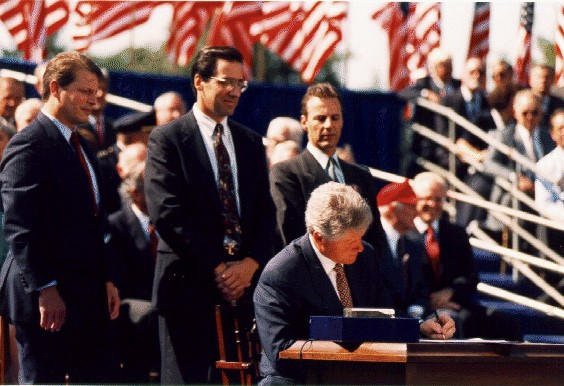 “NAFTA will tear down trade barriers between our three nations, create the world’s largest trade zone, and create 200,000 jobs in [the U.S.] by 1995 alone. The environmental and labor side agreements negotiated by our administration will make this agreement a force for social progress as well as economic growth.” -Bill Clinton, when he signed the North American Trade Agreement (NAFTA) in December 1993

The year was 1993. Intel unveiled the Pentium microprocessor; the World Wide Web was born at CERN. Beanie Babies were launched. China was only a faint blip on the global economy, not yet a World Trade Organization member. In a chilling harbinger of things to come, Islamic Fundamentalists bombed the World Trade Center- for the first time.

1993: NAFTA was signed into law by President Bill Clinton 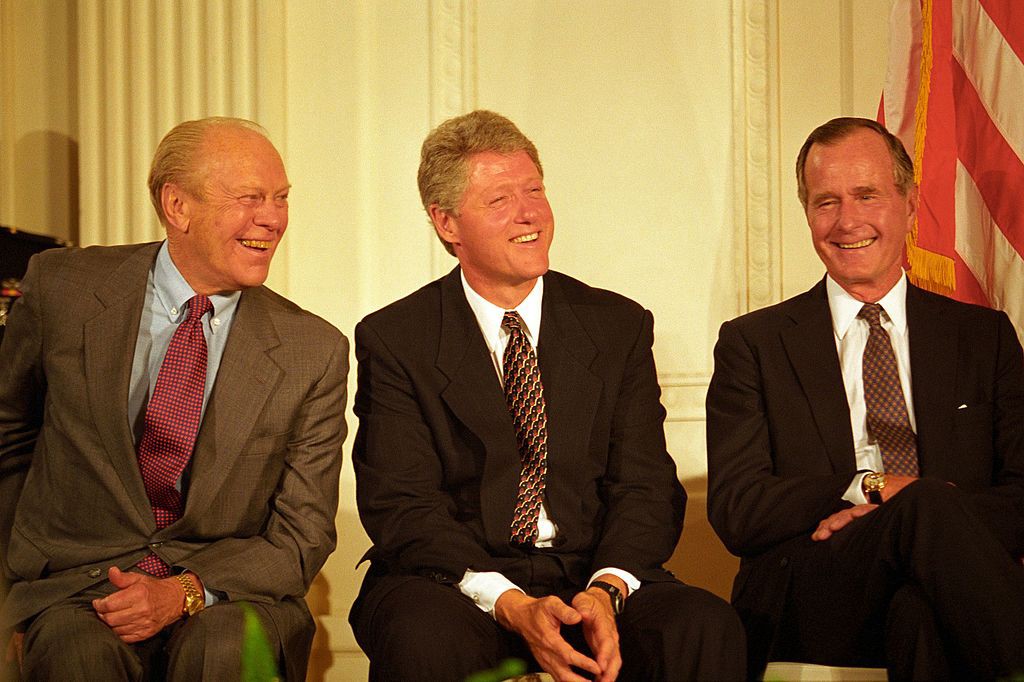 However, Clinton doesn’t deserve all the credit.

“Within the borders of this North American continent are the food, resources, technology and undeveloped territory which, properly managed, could dramatically improve the quality of life of all its inhabitants …. A developing closeness among Canada, Mexico and the United States — a North American accord — would permit achievement of that potential in each country beyond that which I believe any of them — strong as they are — could accomplish in the absence of such cooperation.” -President Ronald Reagan

NAFTA was modeled after the “North American Accord” first proposed by Ronald Reagan a year before he was elected President. A decade later, his Republican successor, President George H.W. Bush, negotiated the final agreement with Canada and Mexico and signed the treaty during his last month in office.

President Bill Clinton fought hard to get it passed and signed it into law.

House Republicans voted for NAFTA by a large margin, 132–43. House Democrats, largely against 156–102. Perhaps not ironically, Democrats in Rust Belt states heavy in manufacturing did not support NAFTA, even then. All 11 House Democrats from Pennsylvania, all 10 Michigan Democrats and 8 of the 10 Democrats from Ohio voted against NAFTA.

The signing ceremony was attended by three former presidents.

What NAFTA Cost the U.S.

Twenty-three years later, experts, scholars and think-tankers alike still disagree on the cost/benefit analysis of NAFTA on the U.S. economy. Many factors drive trade, economic growth and job creation and are impossible to completely separate from each other; like rapid advancements in technology and expanded trade with China, for example. Economic, social, political and environmental issues all contribute to a country’s relative growth or lack thereof in any given period. It’s almost never just one thing.

What is the true extent of NAFTA’s success or failure? We’ll never know: No control group. We don’t have a U.S. 1993–2018 without a NAFTA to examine and compare.

But even the rosiest assessments of NAFTA admit that any positive impact on the U.S. economy has been extremely modest at best. Critics argue that any growth was despite NAFTA, not because of it.

NAFTA defenders also must concede that for specific industries like auto manufacturing, job losses have been punishing. They argue that those jobs would have gone to China eventually anyway, that Mexico would have been a likely relocation spot for U.S. companies even without NAFTA. But they can’t argue that U.S. manufacturing jobs didn't end up in Mexico.

“While Mexico’s unilateral trade and investment liberalization measures in the 1980s and early 1990s contributed to the increase of U.S. Foreign Direct Investment (FDI) in Mexico, NAFTA provisions on foreign investment may have helped to lock in Mexico’s reforms and increase investor confidence [in Mexico.]” — trade specialists M.Angeles Villarreal and Ian F. Fergusson in a 2015 Congressional Research Service study report

Almost half of Mexico’s total Foreign Direct Investment (FDI) is in its growing manufacturing sector. From 1993- 2014, the U.S. — Mexico trade balance went from a $1.7 billion U.S. surplus to a $54 billion deficit.

“Contrary to the promises of the leaders who promoted it, NAFTA did not make Mexico converge to the United States in per capita income, nor did it solve Mexico’s employment problems or stem the flow of migration. However, NAFTA did foster greater U.S.-Mexican integration and helped transform Mexico into a major exporter of manufactured goods.” -Robert Blecker, economist at American University

Whatever good intentions might have been at the outset, critics insist that NAFTA:

“I plan to sign the agreement by the end of November. I then will submit it for approval to Congress where, in theory, there should be no trouble — but anything you submit to Congress is trouble, no matter what. It’s the single greatest agreement ever signed but they’ll say, ‘Well, Trump likes it, therefore we’re not going to approve it because that’ll be good for the Republicans, so therefore we can’t approve it.’” -President Donald Trump

Will Congressional Democrats use their new majority to play politics in an effort to thwart Trump’s agenda, and his reelection chances, at any cost?