Trump Closes the RNC Convention With a Bang and a Bump

A closing speech by President Trump from the White House, fireworks over the Washington Monument, and a ratings bump for Trump. 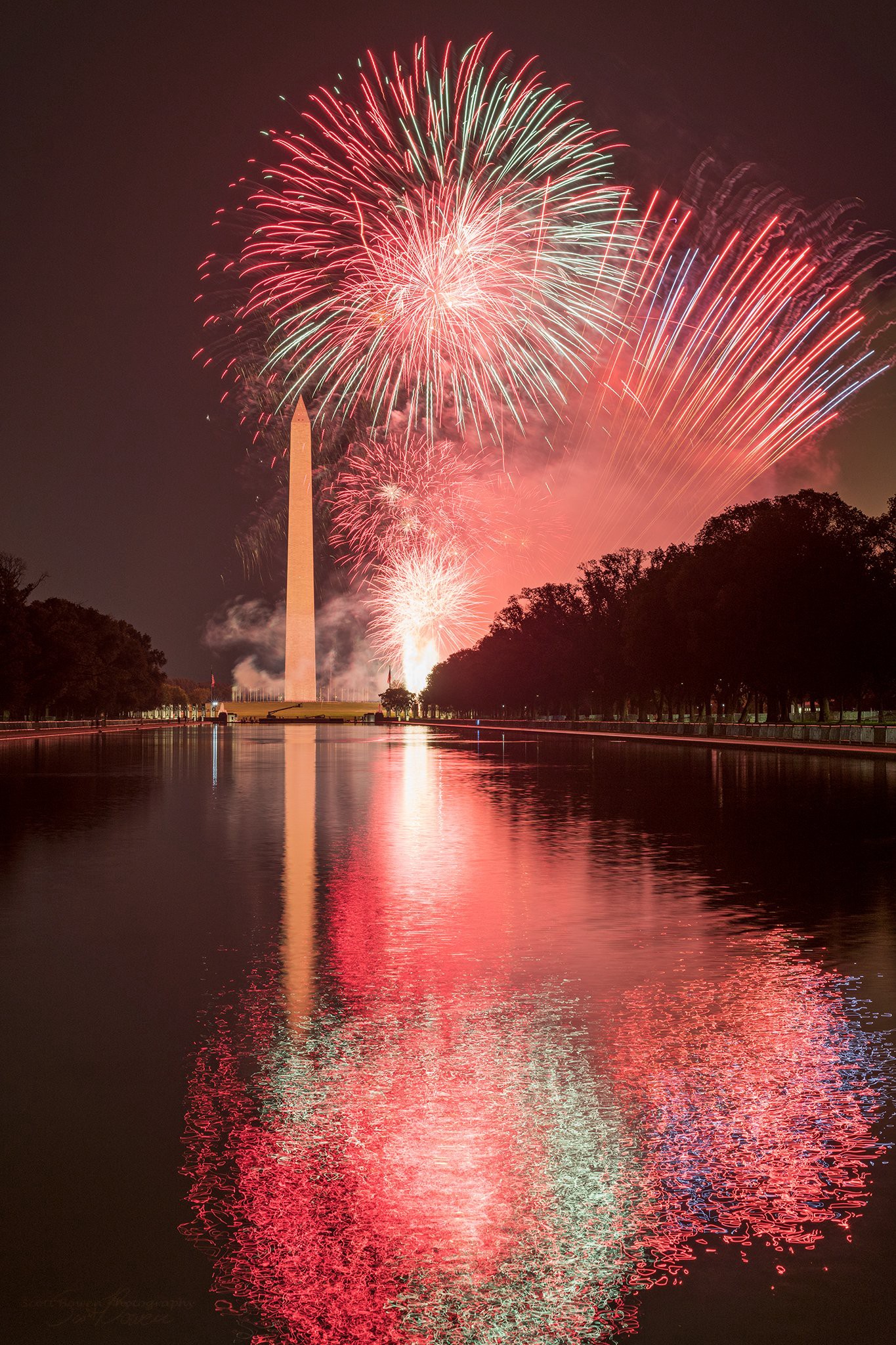 President Donald Trump formally accepted the 2020 Republican presidential nomination on Thursday, closing out the final night of the Republican National Convention on the South Lawn of the White House.

“My fellow Americans, tonight, with a heart full of gratitude and boundless optimism, I profoundly accept this nomination for President of the United States,” said Trump in his acceptance speech, which went on for over an hour.

Painting a stark contrast between the two presidential candidates’ visions for the country, Trump told attendees at the White House and those watching at home that, “there has never been a clearer choice between two parties, two visions, two philosophies or two agendas.”

“This election will decide whether we will defend the American way of life or whether we will allow a radical movement to completely dismantle and destroy it,” Trump said.

The President’s speech took aim at his opponent Joe Biden, who he called, “a Trojan horse for socialism.” After claiming, “Joe Biden doesn’t have the strength to stand up to wild-eyed Marxists like Bernie Sanders and his fellow radicals,” Trump asked his audience, “how is he ever going to stand up for you?”

Trump’s acceptance speech detailed the successes of his administration and offered promises and goals for a second term, but Trump remained committed to his central message of critiquing Joe Biden and the Democratic Party.

“Joe Biden spent his entire career outsourcing their dreams and the dreams of American workers, offshoring their jobs, opening their borders and sending their sons and daughters to fight in endless foreign wars, wars that never ended.”

The President made several references to Biden’s 47 years as a politician, including the former Vice President’s support trade policies which gutted the American manufacturing industry, including the NAFTA and China’s admittance into the World Trade Organization.

“Biden’s record is a shameful roll call of the most catastrophic betrayals and blunders in our lifetime. He has spent his entire career on the wrong side of history. Biden voted for the NAFTA disaster, the single worst trade deal ever enacted. He supported China’s entry into the World Trade Organization, one of the greatest economic disasters of all time. After those Biden calamities, the United States lost one in four manufacturing jobs. The laid off workers in Michigan, Ohio, New Hampshire, Pennsylvania, and many other states didn’t want Joe Biden’s hollow words of empathy; they wanted their jobs back,” Trump told his audience.

Trump continued to take aim at Biden’s role in foreign policy, including his support for the Trans-Pacific Partnership which the President said “would have been a death sentence for the U.S. Auto industry” and the South Korea trade deal “which took many jobs from our country.”

“He repeatedly supported mass amnesty for illegal immigrants. He voted for the Iraq War. He opposed the mission that took out Osama bin Laden. He opposed killing Soleimani, oversaw the rise of ISIS, and cheered the rise of China as a positive development for the world,” Trump said.

Trump says that Biden’s support for the rise of China is the reason “China supports Joe Biden and it desperately wants him to win. China would own our country if Joe Biden got elected. Unlike Biden, I will hold them fully accountable for the tragedy they caused all over the world.”

During his speech, Trump outlined the achievements of his firm term in office, including renegotiated trade deals, and a strong economy before the Covid-19 shutdowns. Trump said his administration “shocked the Washington establishment and withdrew from the last Administration’s job-killing Trans Pacific Partnership.”

“I then approved the Keystone XL and Dakota Access Pipelines, ended the unfair and costly Paris Climate Accord, and secured, for the first time, American energy independence. We passed record-setting tax and regulation cuts, at a rate nobody had ever seen before. Within three short years, we built the strongest economy in the history of the world,” Trump said.

President Trump has aggressively pushed back on U.S. trade policies with China. He investigated the country for unfair trade practices and charged China with discriminatory licensing practices before the World Trade Organization, forcing China to announce the termination of certain duties. The president negotiated an interim trade deal with China and later walked away from a Phase 2 deal after the Chinese did not live up to terms of the first agreement.

Trump withdrew the US from the NAFTA deal and replaced it with the US-Mexico-Canada trade deal, designed to open new markets for US farmers and manufacturers. Though environmentalists may not like his methods, Trump’s administration did achieve energy independence for the US, leading to a drop in world oil prices and a strong assertion of America’s energy dominance.

Trump promised that in his second term he will “cut taxes even further for hardworking moms and dads,” and will continue to make sure “companies and jobs stay in our country.”

“We will also provide tax credits to bring jobs out of China BACK to America — and we will impose tariffs on any company that leaves America to produce jobs overseas. We’ll make sure our companies and jobs stay in our country, as I’ve already been doing. Joe Biden’s agenda is Made in China. My agenda is MADE IN THE USA.”

In what seemed to be a reference to Vice President Joe Biden’s speech at the DNC, in which Biden referred to himself as an “ally of the light” and said Donald Trump had “cloaked America in darkness,” President Trump said during his speech, “We understand that America is not a land cloaked in darkness, America is the torch that enlightens the entire world.”

“Joe Biden may claim he is an ally of the light, but when it comes to his agenda, he wants to keep us completely in the dark, he doesn’t have a clue,” Trump continued.

The President offered a warm thank you to his family members during the speech, and a tribute to his younger brother Robert Trump, who recently passed away at the age of 71.

“I also want to thank my amazing daughter, Ivanka, for that introduction — and to all of my wonderful children — Ivanka, please stand up. And to all of my children and grandchildren, I love you more than words can express. I know my brother Robert is looking down on us right now from heaven. He was a great brother and was very proud of the job we are all doing. Thank you. We love you, Robert.”

President Trump concluded his RNC speech looking forward to what will come in the future. “For America, nothing is impossible,” Trump said. “Over the next four years, we will prove worthy of this magnificent legacy. We will reach stunning new heights. And we will show the world that, for America, no dream is beyond your reach. Together, we are unstoppable. Together, we are unbeatable.”

The final night of the RNC concluded with a massive fireworks display at the Washington Monument.

While elected Democrats were quick to condemn Trump’s use of the White House for a campaign event, precedent set during the Obama administration seems- for now- to have offered the Trump administration some cover on potential violations of the Hatch Act.

The media largely panned the RNC convention, taking issue with the mask-less guests attending Trump’s speech, the rosy presentation of America, the optimistic tone. Some Democratic strategists are worried, however. Many elements of the convention seem to have been effective, including the diversity of the convention speakers.

Trump seems to have enjoyed a bit of a ratings boost, post-convention. The Democratic Party, however, did not. With only two months to go before Election Day, some Democrats are nervously watching Trump inexorably and inexplicably climb in the polls.