The two nations have agreed to normalize economic relations 21 years after a bloody conflict tore them apart. 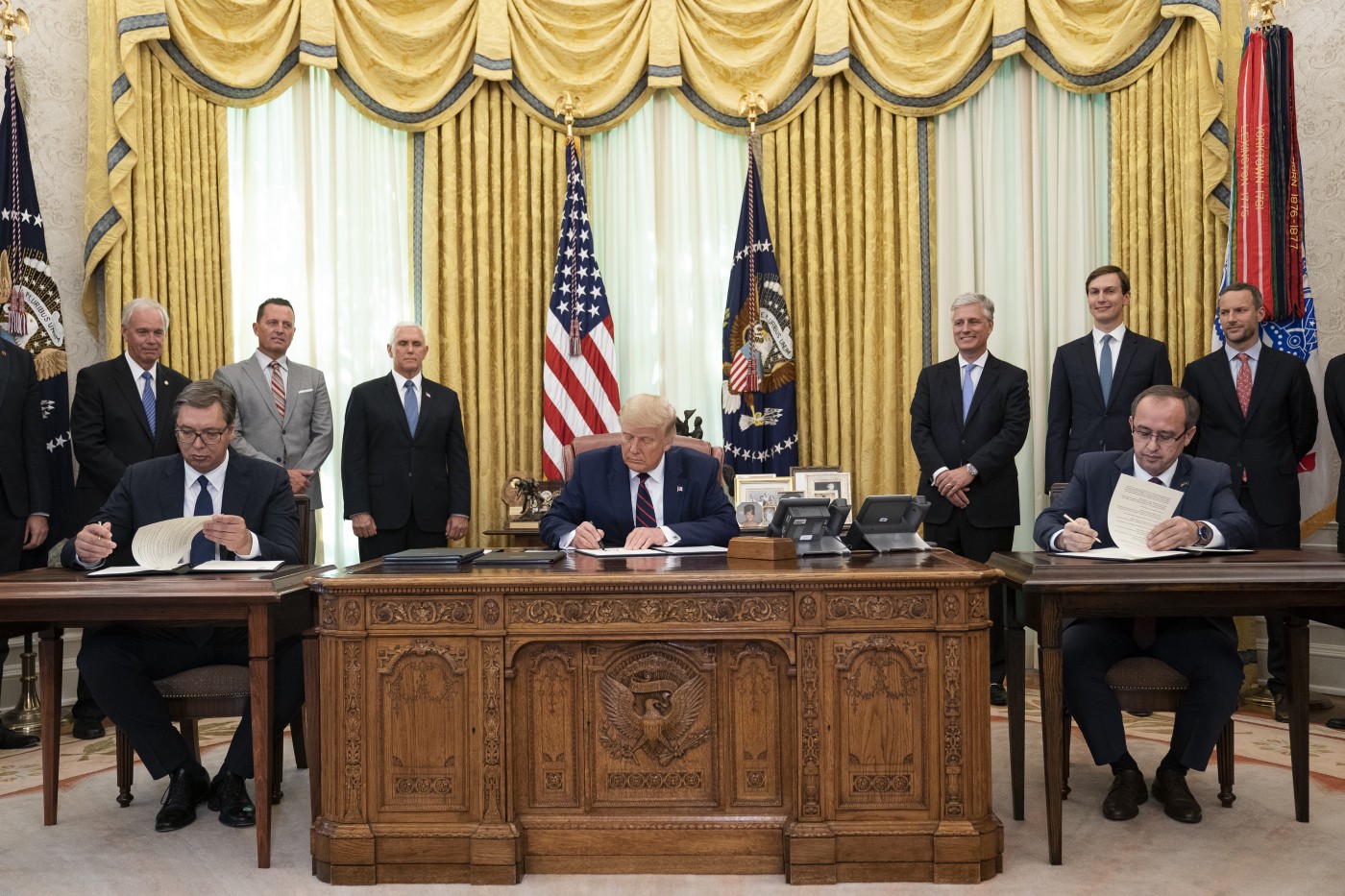 U.S. President Donald Trump announced the signing of a major agreement between Serbia and Kosovo at the White House on Friday.

In the Oval Office, with key members of the Trump administration and delegates from both countries looking on, President Aleksandar Vučić of Serbia and Prime Minister Avdullah Hoti of Kosovo signed a commitment to normalize economic relations between the two countries.

“This is a truly historic day — a very, very important day, especially in a beautiful part of the world. I’m pleased to announce a truly historic commitment: Serbia and Kosovo have each committed to economic normalization. Very expect — very important term. They’ve been working on this for many, many years — decades, actually,” President Trump said.

“After a violent and tragic history, and years of failed negotiations, my administration proposed a new way of bridging the divide. By focusing on job creation and economic growth, the two countries were able to reach a major breakthrough — something that nobody thought was going to be possible. And I think it’s going to work out very well. And we’re going to be working with them on economic cooperation across a broad range of issue — issues.,” Trump continued.

The US-brokered negotiations will see the two Balkan states establish an economic relationship focused on job creation and creating momentum for future agreements. Both countries have already agreed to continue developing air and rail links and to restore commercial flights between both nation’s capitals, Belgrade and Pristina, clearing the way for the first flight between the two in 21 years.

As part of the agreement, Serbia will move its embassy in Israel to Jerusalem and Kosovo will recognize Jerusalem as the capital of Israel.

The mainly-Muslim country of Kosovo has agreed to move towards normalizing ties and establishing diplomatic relations with Israel. Kosovo has not recognized Israel since the Trump administration moved the U.S. embassy in Israel from Tel Aviv to Jerusalem in 2018.

Israeli Prime Minister Benjamin Netanyahu stated on Friday that Kosovo had also agreed to move its embassy to Jerusalem, The Jerusalem Postreported.

“Kosovo will be the first Muslim-majority country to open an embassy in Jerusalem. As I said during the last days, the circle of peace and recognition of Israel is expanding with more countries expected to join,” Netanyahu said.

“I thank my friend the Serbian President Vučić for the decision to recognize Jerusalem as the capital of Israel and to transfer to his country’s embassy. I would like to thank my friend, President Trump, for his contribution to this achievement. We will continue efforts so that additional European countries will transfer their embassies to Jerusalem.”

“When I say ‘great job,’ I really mean it, because your people and you wanted to engage yourself into a matter that, as a matter of fact, very few people wanted to do. And also your commitment to stabilize the region and to bring peace and stability to the region is something that we appreciate a lot. It’s something of utmost significance for us,” Vučić said.

“And speaking about economy, of course speaking about politics, we haven’t resolved our problems,” Vučić continued. “There are still a lot of differences between us, but this is a huge step forward, and I’m also again profoundly grateful to you and to your people that you successfully got us here.”

“I think, absolutely, this is a great moment for Kosovo and for the region,” Prime Minister Hoti of Kosovo said in agreement. “I think we made a huge step forward to our full normalization of relations that should lead eventually to mutual recognition between the two countries.”

“We are fully committed to work together to improve people’s lives, to bring new jobs into the region. And we fully believe in your administration. We share the same values of freedom, democracy, an open-market economy. So we are looking forward to starting, (inaudible) this agreement as soon as possible” Hoti said.

The agreement to normalize economic ties between the two nations comes 21 years after NATO launched a 78-day air strike against Serbia to stop a bloody crackdown against ethnic Albanians in Kosovo. Kosovo’s Parliament declared independence from Serbia in 2008 and has remained unrecognized by Serbia, Russia and China. Serbia’s refusal to recognize Kosovo has kept tensions high between the two nations until U.S. efforts, headed by Richard Grenell, special envoy to Kosovo and Serbia, helped broker an agreement.

Special Envoy Grenell said “one of the great parts of this agreement is, over the next year, we have a freeze on the recognition and de-recognition campaigns.”

The agreement implements a one-year suspension on Kosovo’s search for new membership in international organizations, and a one-year suspension for Serbia’s de-recognition campaign against Kosovo. Serbia and Kosovo have also agreed to work with the U.S. on a feasibility study of both countries sharing the heavily disputed Gazivode/Ujmani Lake. The region is a very valuable, reliable water and energy supply.

The two countries have agreed to expedite efforts on issues of missing persons and refugees from the 1990’s Kosovo war. Each has pledged to implement long-term solutions for identifying and locating displaced persons and has pledged to identify a point of contact to lead these efforts within their government ministries.

The commitment came only weeks after Trump announced a peace agreement had been reached between the United Arab Emirates and Israel.

The Kosovo-Serbia White House summit was originally scheduled for June, but it was cancelled after Kosovo President Hashim Thaci, who was to lead the Kosovo delegation, was indicted by an international court for alleged war crimes during the 1998–99 guerrilla uprising against Serbian rule and its aftermath. Thaci has denied the charges.

That the leaders of Serbia and Kosovo have been enticed to the negotiating table by the lure of growing both economies, and protecting their countries from extremist threats in the region, shouldn’t surprise the international community. More accords seem likely.

The geopolitical situation in the region has been gradually shifting for some time, and the Trump administration seems determined to seize the opportunity.