There Would Be No Black History Month Without Black Musicians

African-American musical artists have long been our teachers, luminaries, and philosophers. What have we learned? 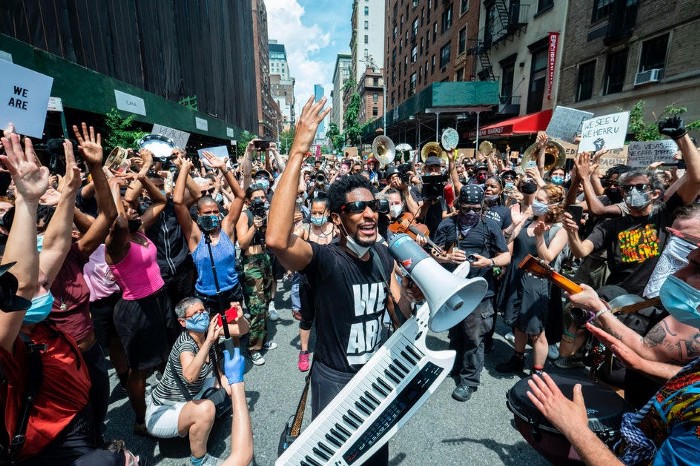 Black musicians in America have been its record keepers, its generational memory centers. They have been our most aspirational dreamers, fighters for the true American ideal of equality- that constitutional edict never quite realized in the many years since this nation’s founding.

Bellwether, Black musical luminaries have been on the forefront of every social justice, liberation and civil rights movement of our time, including the most recent one.

During the days of the Underground Railroad, Black musicians wrote and sang gospel songs encoded with directions on how to escape slavery and successfully flee North to freedom.

“Wade in the water, wade in the water, children,” Harriet Tubman herself sang- advice on how to avoid detection by tracking animals. “See that host, all dressed in red,” was how to recognize conductors of the Railroad; “must be the children that Moses led.”

“If you don’t believe, I been redeemed,” the people sang to one another in the cotton fields of the South; “come on and follow me down by the Jordan’s stream. I looked over yonder, and what did I see? It was a band of angels, coming for me.”

Don’t read the words; listen to the Staples Singers.

There is something emotionally evocative about rhythm mixed with voices. Setting words to music creates a combination beyond the sum of its parts; it makes us feel something. It transports the mind, changes it. Human beings have been moved by story and song since long before the oldest known musical instruments were crafted 43,000 years ago.

What we learn from music sticks. Which is why Black musicians have been so integral to moving social progress forward and keeping history alive, including the creation of Black History Month.

From Billie Holiday, we learned about “Strange Fruit”. If you didn’t grow up in the South, you might not have known anything about the subject of what the BBC has called the most shocking song of all time.

It is shocking. When Billie Holiday sang about “Strange Fruit, hanging from the poplar trees, swaying in the breeze,” she was talking about the bodies of Black people who had been lynched; murdered by a racist mob and left hanging in the sun.

It’s not nice. It’s not pretty. But if you listened to the song felt a terrible weight settle in the pit of your chest, a heartfelt internal cry against cruelty, injustice and oppression, Miss Holiday has done her work well.

“Strange Fruit” was based on a poem by Jewish schoolteacher Abel Meeropol called “Bitter Fruit”. Meeropol wrote the poem to describe his horror at lynchings in the Southern states.

We want to look away. From a photograph, from words on a page, we can. From the song “Strange Fruit” we cannot. The melody is haunting, her voice is so beautiful; the lyrics almost too painful to bear.

To hear it once is to never forget it.

Likewise, from Ray Charles we learned about the pain of segregation. When he sang about “Georgia On My Mind” we felt his unrequited love for a home that refused to claim him. We felt his longing to return to a Georgia united, equal, made whole, though he knew this wish to be impossible.

Cab Calloway taught us how to laugh about it all. Junior Marvin warned us about “Police and Thieves,” in the street. “Scaring the people with their guns and ammunition.”

Bob Marley taught us who Haile Selassie was, because they definitely never covered him in school. From Erykah Badu we learned the secrets of the universe, including the fact that our entire modern civilization originated in ancient Africa- not Rome or Greece.

Some bellwethers, however, have been willfully ignored, censored and marginalized, to our cost. Some of the worst problems our society faces today are things Black musicians have been warning about- to no avail- for decades.

They were sounding the alarm bell about Black people in danger of dying violently before their time, facing incarceration and unfairly long sentences instead of their promised shot at the American Dream.

“All That I Got Is You,” by Ghostface Killer might have given Senators in Washington some idea of what being “tough on crime” meant in the real world for poor Black kids. They shouldn’t have been trying to shoot Ice Cube and Dr. Dre for the message; they should have listened to the messenger.

Do not ask for whom the bell tolls; it tolls for all of us. The problems Black artists warned about for decades have compounded in the modern age; they are still tearing at the fabric of our society. What African-American musicians have long known, some have only begun to grapple with this year.

Perhaps we should start listening.