The U.S. government has been forced to confront the human rights abuses being perpetrated on Uyghur Muslims in Xinjiang, China. 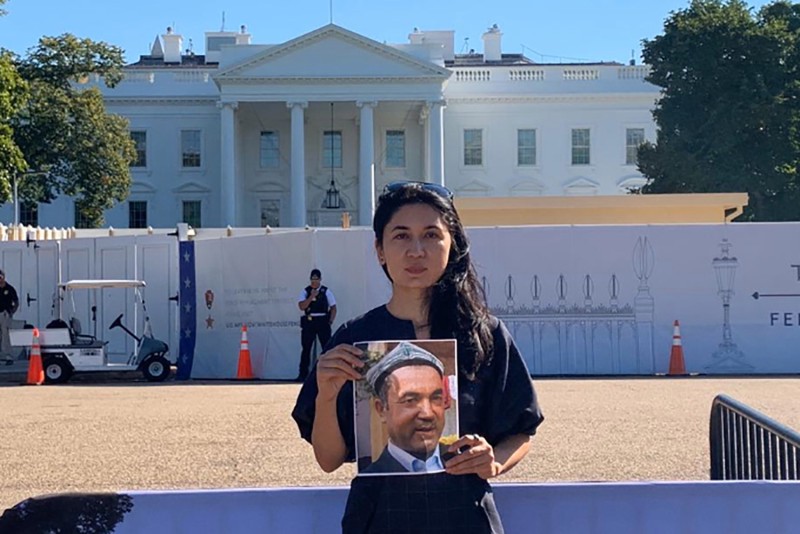 “I Was a Model Uighur. China Took My Family Anyway. “ Nur Iman holds a picture of her father, who was abducted by the Chinese Communist Party along with Iman’s mother and brothers in 2017. (Photo: COURTESY OF NUR IMAN)

The U.S. government on Monday announced an import ban on certain products imported from the People’s Republic of China, due to evidence that these goods are being manufactured using “state-sponsored forced labor.”

The withhold release orders (WROs) target all goods made with labor from the Lop County №4 Vocational Skills Education and Training Center in Xinjiang.

The order will ban items including hair products made in the Lop County Hair Product Industrial Park, apparel produced by Yili Zhuowan Garment Manufacturing Company and Baoding LYSZD Trade and Business Company; and cotton produced and processed by Xinjiang Junggar Cotton and Linen Company, which are all produced in Xinjiang.

Department of Homeland Security acting Deputy Secretary Kenneth Cuccinelli said the WROs are aimed at combating the use of forced labor in Xinjiang, where the Chinese government is engaging in human rights abuses against the Uyghur people and other ethnic and religious minorities.

“By taking this action, DHS is combating illegal and inhumane forced labor, a type of modern slavery, used to make goods that the Chinese government then tries to import into the United States. When China attempts to import these goods into our supply chains, it also disadvantages American workers and businesses,” said Acting DHS Deputy Secretary Cuccinelli.

The orders allow Customs and Border Patrol (CBP) agents to detain shipments made by the named companies or entities in Xinjiang. The order also gives companies an opportunity to provide proof their merchandise was not produced using forced labor.

“President Trump and this Department have, and always will, put American workers and businesses first and protect American citizens from participating in these egregious human rights violations,” Cuccinelli continued.

Acting CBP Commissioner Mark A. Morgan said these orders “send a clear message to the international community that we will not tolerate the illicit, inhumane, and exploitative practices of forced labor in U.S. supply chains.”

CBP had initially prepared a broader ban that would’ve included cotton, cotton textiles and tomato products exported from Xinjiang but “because of its unique nature more restrictions are still under review,” Cuccinelli said. He also said the U.S. government is trying to develop methods to determine if other products are being produced using forced labor.

“We are working on advancing the technology to trace even directly where product like this comes from,” he added. “We’d like businesses in other parts of the world that would like to do business in the U.S. to disentangle themselves from this set of horrific practices.”

The Trump Administration imposed sanctions on several Chinese Communist Party officials, the Xinjiang Public Security Bureau and the Xinjiang Production and Construction Corps in July for their role in constructing and operating these internment camps.

In June, President Trump signed the Uyghur Human Rights Act into law to hold “accountable perpetrators of human rights violations and abuses such as the systematic use of indoctrination camps, forced labor, and intrusive surveillance to eradicate the ethnic identity and religious beliefs of Uyghurs and other minorities in China.”

Wang Wenbin, a Chinese Foreign Ministry spokesperson responded to the U.S. Department of State’s webpage on Xinjiang and said it “is full of lies and rumors”.

“China once again urges the U.S. to stop political manipulation and interference in China’s internal affairs under the pretext of Xinjiang-related matters. The attempts to undercut Xinjiang’s prosperity and stability and to obstruct China’s growth will never succeed,” Wenbin said at a news conference on Sep. 14.

In August of 2018 however, Chinese Communist Party officials were issuing similar statements, calling a U.N. report on its human rights abuses baseless and denying the very existance of these camps. “There is no such thing as re-education centers,” said senior CCP oficial Hu Lianhe in 2018.

The CCP maintained these denials until forced to admit the existance of interment camps by satellite imagery, leaks, and the harrowing first-hand accounts of people who have escaped and defected.

The U.S. State Department estimates that over 1 million Uyghur Muslim and other minorities in Xinjiang have been imprisoned in internment camps or converted detention facilities in Xinjiang. The U.S. State Department along with other countries, scholars, human rights organizations, journalists, think tanks, and survivors of the Xinjiang camps themselves have substantiated reports of these abuses including:

The tipping point may have come in July, when 13 tons of real human hair from China, sold to make wigs and weaves, was seized by customs officials. In a market dominated by scarcity, the expensive wigs confirmed what satellite imagery and human rights watch groups have long suggested: The Chinese Communist Party is shaving the heads of Uyghur prisoners and selling their hair on the global market.

There have also been credible reports of organ harvesting.

CBP has issued 8 WROs on products from China in 2020 so far. Other countries are likely to follow suit.

Uyghur activists have called upon world governments and the international business community to condemn the human rights violations happening in Xinjiang by imposing trade sanctions.

“We are trying to let the world know that signing up for the Belt and Road initiative right now is complicit with the Uyghurs genocide. So many companies are being complicit.” — Rushan Abbas, Campaign for Uyghurs.