From his place in State, the former President leaves his fellow lawmakers one final and extremely rare gift; a little more time. 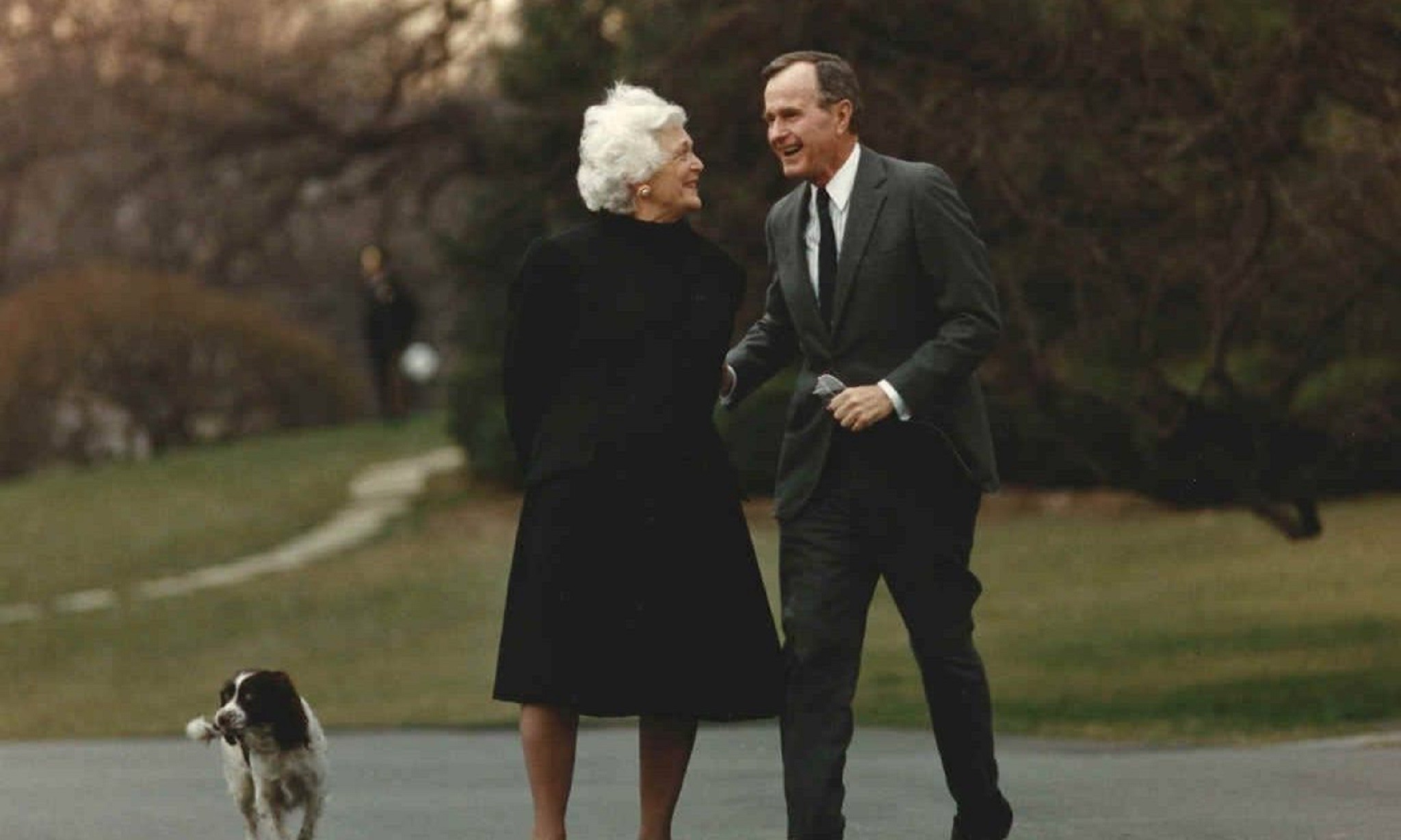 “There wasn’t any single inspiration other than the concept that public service is a noble calling — worth doing and worth trying to succeed in.” — President George H.W. Bush

Time, love and tenderness are always running short on Capitol Hill. The current climate in Washington- post contentious mid-term election scramble, pre looming immigration showdown and possible government shutdown- would have undoubtably proved no exception were it not for former President George H.W. Bush. Even in death, he serves his country.

The passing of former President and life-long statesman George H.W. Bush, and perhaps the many tributes and reminders of a long life spent in public service, seems to have taken all the fight out of legislators to engage in a bitter feud over border wall funding. At least for now.

Republicans and Democrats had been firmly deadlocked over funding for President Trump’s proposed border security improvements and were facing a December 7th deadline to reach an agreement or risk government shutdown.

After the 41st President’s passing, lawmakers agreed to postpone votes, giving both sides of the aisle more time to pause and reflect. And time, perhaps, to consider their own legacies. 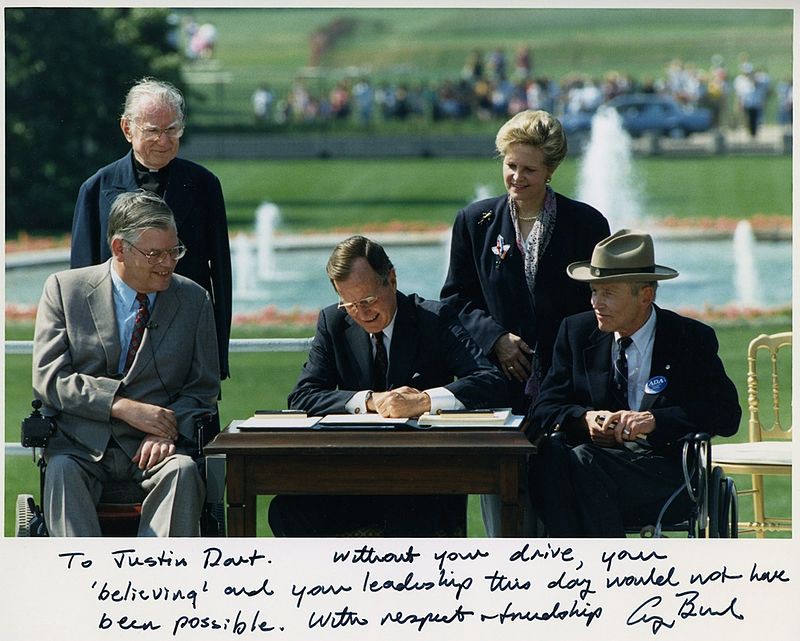 Monday, Congressional leaders approved a two-week funding respite that pushes back the looming government shutdown deadline until December 21, 2018. The two-week stopgap measure, known as a continuing resolution, will fund government agencies through December 21.

The House has cancelled votes and committee meetings for the week. House Speaker Paul Ryan has also postponed his farewell address at the Library of Congress; even the annual Christmas tree lighting ceremony has been delayed. 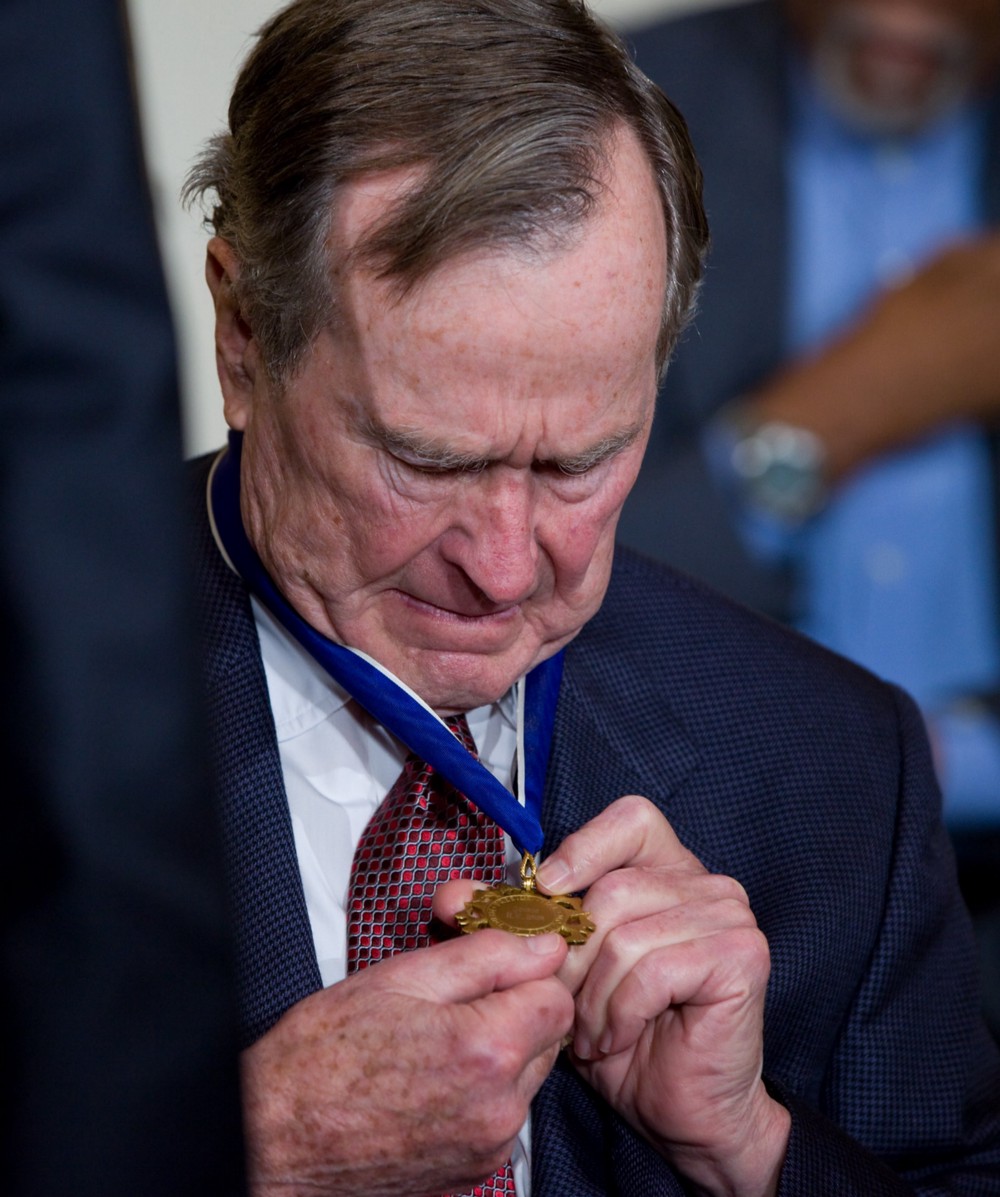 Former President George H. W. Bush reads the inscription on the back after being presented with the 2010 Presidential Medal of Freedom by President Barack Obama during a ceremony in the East Room of the White House February 15, 2011. (Official White House Photo by Pete Souza)

Instead, Capitol Hill will spend the next few days remembering and honoring George H.W. Bush. He will lie in state, on the storied Abraham Lincoln catafalque and under the Brumidi fresco “The Apotheosis of Washington”, until 7 a.m. Wednesday.

His funeral will then be held at the National Cathedral in Washington, D.C.

President Trump has ordered the federal government to close on Wednesday, declaring it a national day of mourning for the former President.

The Art of the Grand Bargain 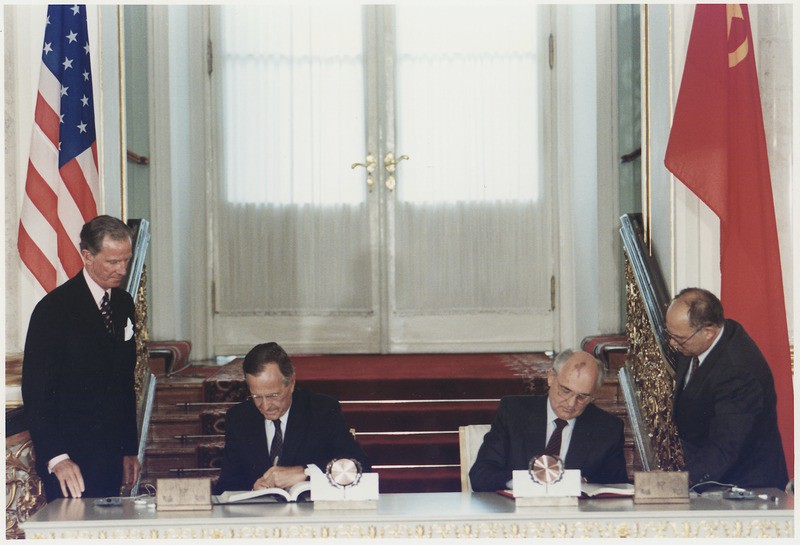 George H.W. Bush was known for his character, steadiness and modest humility- he never even wrote an autobiography. He was also well known as someone who wasn’t afraid to cut deals with the other side.

“For the nation, it is the loss of a man we may never see the likes of again, a leader that led entirely by example and a leader who could reach out and make a deal, but never give away his core.” -Rep. Roger Williams (R-Texas), a family friend of the Bush’s, told The Hill.

Together, members of the Senate made their way to the majestic Capitol Rotunda on Monday afternoon, where the former President will lie in state until Wednesday.

Dick Cheney, former Vice President and Defense secretary during the George H.W. Bush administration, walked in with former Secretary of State Colin Powell, who served as Bush’s chairman of the Joint Chiefs of Staff during the Gulf War.

Even in the press, the former President has unusually broad support. In Bloomberg’s George H.W. Bush Was the Nice Guy Who Finished First, the 41st president is credited with unusual respect across the political aisle.

Maureen Dowd liked him, writing affectionately of their long friendship for the New York Times in The Patrician President and the Reporterette: A Screwball Story and calling Bush her “faithful correspondent, Poppy Bush, scribbling and typing notes though decades of history.” When he disagreed with her, which he sometimes did, he always did it kindly and politely. And privately. 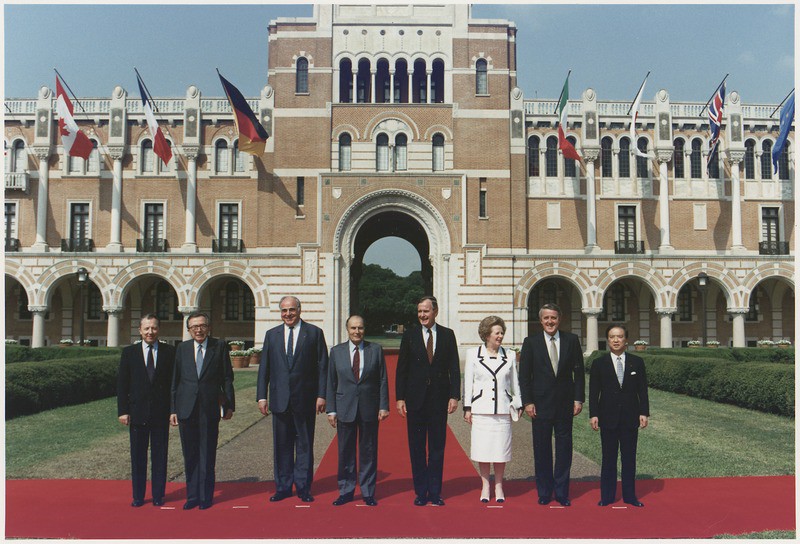 Though he was born to privilege, George H.W. Bush dedicated his life to public service. Will Republicans and Democrats be inspired by his sterling example to find better and more civil ways of working together?

For the statesman, the family man and the patriot, George H.W. Bush, there could be no higher tribute.