The Trial of Derek Chauvin

The trial of the police officer responsible for the death of George Floyd has finally begun. Will justice be done? 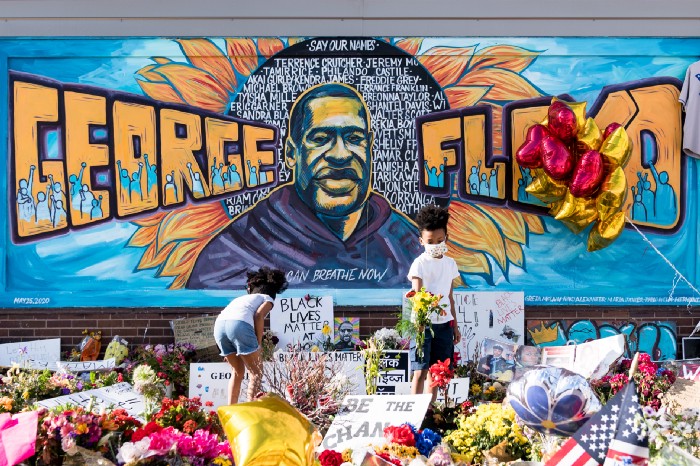 Monday marks the second day of Black Lives Matter protests in the city of Minneapolis as the trial of Derek Chauvin, the former police officer charged in connection with George Floyd’s death last summer, begins.

The death of George Floyd gained widespread news coverage last May, as protests and riots covered cities across the country.

“The city had four chances to stop Chauvin before he put his knee on George Floyd’s neck, and they did nothing,” Michelle Gross, founder of Communities United Against Police Brutality, told the crowd on Sunday. “These are people whose families are left to grieve. These are people who will never complete their life’s mission because their lives were stolen from them prematurely.”

Thousands of protesters marched through the streets of Minneapolis on Sunday before the trial and chants of “No Justice, No Peace!” rang through the city. On Monday, protests began in earnest outside the courthouse in Minneapolis, as jury selection began in Derek Chauvin’s trial.

Finding impartial jury members for the trial is the first challenge to arise, as most Americans already hold strong preconceptions about the infamous case.

There are sure to be other challenges as well. Chief among them is what happens when it becomes widely known that Derek Chauvin is being charged with second-degree murder and second-degree manslaughter, rather than the more serious charge of murder in the first degree.

Shown clearly in video evidence certain to be introduced during the trial, it is an indisputable fact that Chauvin pressed his knee into the neck of George Floyd for nearly nine minutes. Viral video footage of the incident shows Floyd crying and yelling “I can’t breathe” as onlookers pleaded with the officers to loosen their hold on Floyd.

The Minnesota Court of Appeals ruled that Chauvin could also face an additional charge of third-degree murder, which could delay the start of jury selection if Chauvin makes the decision to appeal. Eric Nelson, Chauvin’s attorney, told the court he intends to file a petition for the Minnesota Supreme Court to review the Court of Appeals opinion that came in late last week.

On Monday, Hennepin County Judge Peter Cahill paused jury selection for at least a day while an appeal proceeds over the potential reinstatement of a third-degree murder charge. Cahill initially ruled that jury selection can move forward on Monday, but prosecutors said they would ask the Court of Appeals to intervene so the judge sent the potential jurors home for the day.

The prospective jurors have received questionnaires regarding their knowledge of the case, their attitudes towards the justice system and their media habits. These will be provided to the lawyers and judge and the individuals will be questioned by lawyers to pinpoint any biases or preconceptions.

Even if a juror has some leaning in the highly publicized case already, it’s important that they are able to put their feelings and experiences aside to be fair and impartial.

“You don’t want jurors who are completely blank slates, because that would mean they’re not in tune at all with the world,” said former prosecutor Susan Gaertner. “But what you want is jurors who can set aside opinions that have formed prior to walking into the courtroom and give both sides a fair hearing.”

It is expected to take three weeks just to seat a jury of 12 members and up to four alternates. Jurors will only be referred to by a randomized number as Judge Cahill has ordered their identities to remain a secret for the duration of the trial. Opening statements are expected on March 29 and the process is expected to be complete by late April.

Judge Cahill has ordered COVID-19 precautionary behavior in the courtroom such as social distancing guidelines and masks, which can be removed when giving testimony, examining witnesses and when giving opening statements or closing arguments. Under the new guidelines, all witness examinations and arguments must be conducted from the lectern, and any sidebar conferences will be conducted over wireless headsets.

The city of Minneapolis is preparing for unrest following the outcome of the trial by spending millions on new police officers, protective barricades around the courthouse and City Hall, and calling in up to 2,000 National Guard members and 1,100 other law enforcement officers to patrol the streets.

Whatever the verdict, the consequences for Derek Chauvin and his fellow officers aren’t likely to satisfy the public’s definition of “justice”, considering the reduced charges.

Nor is a guilty verdict assured, even given the nature of the evidence against Chauvin and his colleagues. To achieve a second-degree murder conviction, the prosecution must prove Chauvin’s actions were a casual factor in the death of George Floyd beyond a reasonable doubt. That prosecutors are still pursuing the lesser charge of third degree murder against him, doesn’t bode well for their confidence in the case.

For the lesser charge of third-degree murder, prosecutors need only prove Derek Chauvin showed a “reckless disregard for human life”, which they almost certainly will be able to do, considering the video.

That Chauvin’s defense attorney is fighting the third-degree charge demonstrates a certain confidence that the second-degree charge won’t result in a guilty verdict.

Whatever the outcome of the case, the U.S. will have no closure, no justice, and no peace until the thorniest question of all is answered about the actions of Derek Chauvin and his fellow officers that fateful day in May:

Why did they do it?

More specifically, why did these four police officers feel empowered to do as they did, in broad daylight, in front of dozens of witnesses who were openly recording the disturbing incident?

We all saw the video. The inhumanity on the face of Derek Chauvin as he ignored all pleas, from Floyd and witnesses, for almost ten minutes must have an explanation. For the actions of these police officers, we deserve an answer.