The Terrible Environmental Cost of COVID-19

Disposable masks are ending up in our waterways at an alarming rate. Comprised of micro-plastics, they will take 450 years to decompose. 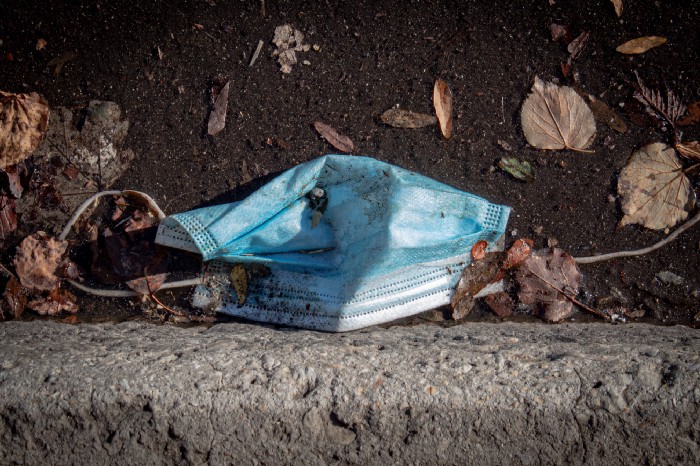 Back in May of last year, some predicted that COVID-19 would be a disaster for the environmental movement. The signs were hard to miss. Littering was suddenly back, with disposable masks and gloves adorning parking lots and roadsides everywhere. Single-use plastics, which had been going out of vogue for some time, were suddenly back as well.

Now, nearly a year since COVID-19 protective measures began in earnest, the evidence of COVID-19’s negative impact on the environment is undeniable.

Masks, PPE, gloves and other disposable items are an essential part of the COVID-19 response, but environmental groups are warning individuals who don’t work in healthcare about the environmental dangers of single-use face masks.

Like much of our other trash, discarded masks are comprised of micro-plastics, which do not break down and often end up in waterways and oceans. Divers in the Philippines have recently found coral reefs covered with personal protective equipment.

“Personal Protective Equipment (PPE) is washing up on coral reefs close to the Philippine capital, Manila,” BBC News reported this week. “According to an estimate by the Asian Development Bank, during the peak of the Covid-19 outbreak, the city could have been generating up to 280 tonnes of extra medical waste per day.”

BBC’s video footage shows divers from the Anilao Scuba Dive Centre explaining how when they went to study the reef they found dozens of masks that had been there for months. According to Howard Johnson, BBC’s Philippines correspondent, the face masks will either end up in landfill or back in the sea.

“That’s a problem because polymers inside the surgical masks are breaking down into microplastics, easily consumed by marine wildlife and the coral reefs that nurture them,” Johnson reported.

Aside from eating the masks, images have circulated online of various animals trapped in the ear loop of face masks.

“It’s incredibly disheartening and discouraging. It would be anyway, but this lake has an international designation as an important bird area,” said Holly Hogan, who has been studying marine birds for 30 years. “Everybody disposing of these single-use masks, I thought ‘where are they going to go?’ and well, we know where some of them are ending up, unfortunately.”

Gary Stokes of OceansAsia, a Hong Kong based environmental group, says that on an uninhabited island “about 100 metres long, we found about 70” masks. One week later, another 30 masks had washed up.

He began checking nearby beaches and was “finding them everywhere,” he said. “Ever since society started wearing masks, the cause and effects are being seen on the beaches.”

OceansAsia released a report in December which concluded that around 1.56 billion face masks will be dumped into our oceans and will further contaminate them with an estimated 4,680 to 6,240 metric tonnes of plastic pollution.

The report states that, “these masks will take as long as 450 years to break down and all the while serve as a source of micro plastic and negatively impact marine wildlife and ecosystems.”

“Marine plastic pollution kills 100,000 marine mammals and turtles, over a million seabirds, and even greater numbers of fish, invertebrates, and other marine life,” the report said. “Plastic pollution also profoundly impacts coastal communities, fisheries, and economies. Conservative estimates suggest that it could cost the global economy $13 billion USD per year, and lead to a 1–5% decline in ecosystem services, at a value of between $500 to $2,500 billion USD.”

Director of Research for OceansAsia and Lead Author of the report Dr. Teale Phelps Bondaroff said, “the 1.56 billion face masks that will likely enter our oceans in 2020 are just the tip of the iceberg. The 4,680 to 6,240 metric tonnes of face masks are just a small fraction of the estimated eight to 12 million metric tonnes of plastic that enter our oceans each year.”

Divers from the French nonprofit Operation Mer Propre said they’ve found dozens of gloves, masks and bottles of hand sanitizer in the Mediterranean Sea. Laurent Lombard from the organization said in a Facebook post that she worries, “there risks being more masks than jellyfish.”

The concerns of marine biologists and conservation scientists are being echoed by many other environmental groups, most recently by GEA Sustainability ESCP, a student association at ESCP Business School.

The organization released a press release stating that “research has found that the world risks having more masks than jellyfish in the oceans in the near future due to the consequences of producing billions of items of personal protective equipment to fight COVID-19.”