The Morality of What Works

In a nation as ethically diverse as the U.S., how should the government make moral decisions? 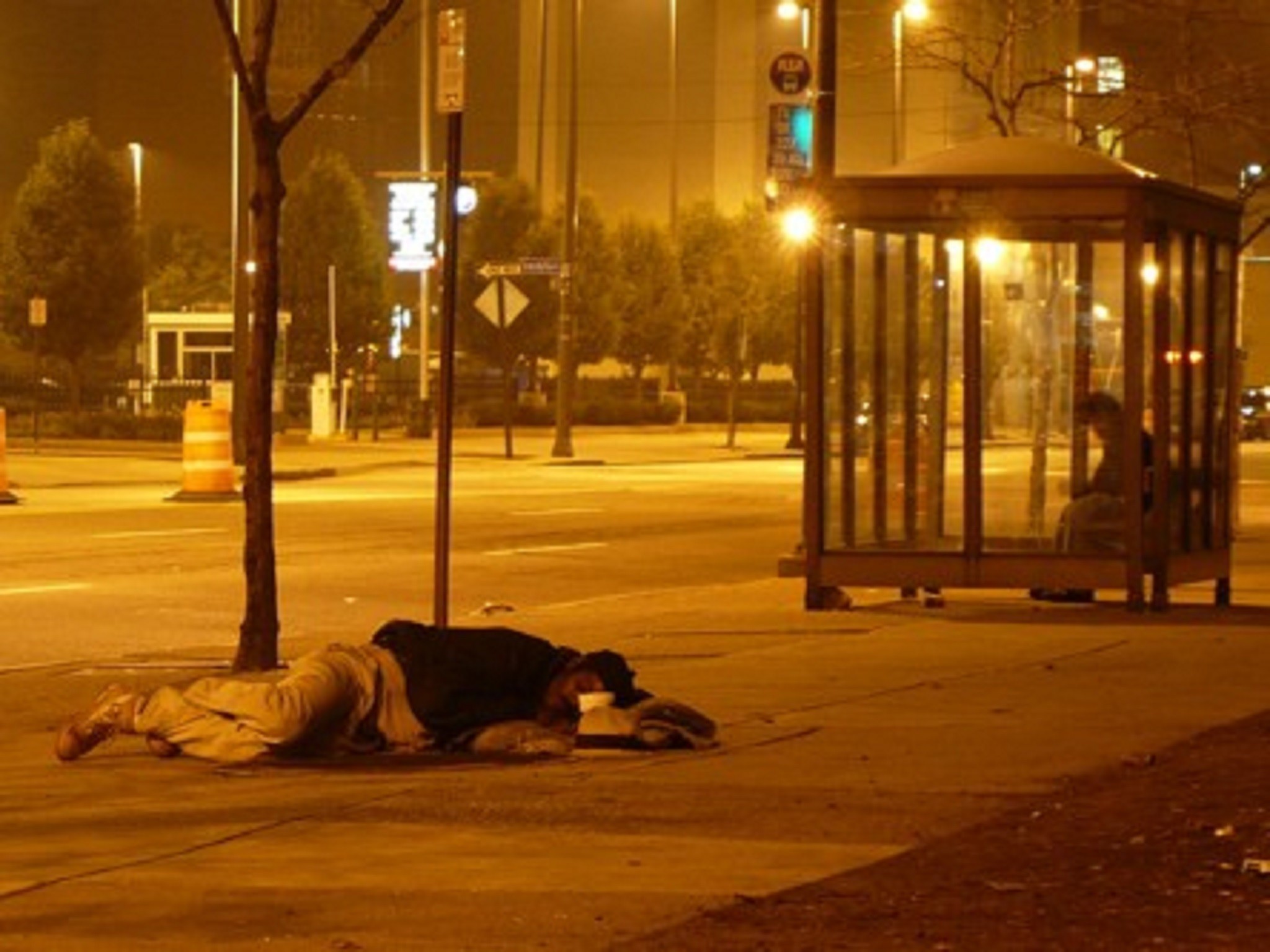 A homeless man sleeps on the street in Cleveland, Ohio. October 18, 2007. (photo:pineapplexvi)

The problem of homelessness has officially been solved.

’Tis the season: The Winter season. What was already the hardest time of the year for homeless people in America worsened when this story hit the press two weeks ago: ‘Woman With A Heart Of Gold’: Good Samaritan Stabbed To Death In Baltimore, after rolling down her window to give money to a homeless woman.

This one didn’t fill any hearts with compassion and mercy, or open any wallets to help those less fortunate, either: New Jersey couple, homeless man charged in GoFundMe scam: ‘Completely made up’.

Homelessness remains a persistent problem in America, including an estimated 2.5 million homeless children.

Homeless women, any homeless person with a child or a dog and homeless people who are disabled pull on my particular heartstrings the hardest. I give money if they ask, even knowing there are likely better and far more effective ways to help.

Because the answer to end homelessness is already here. Utah Reduced Chronic Homelessness By 91 Percent; Here’s How.

Researchers have completed thousands of studies, analyzed decades worth of data and metadata, pored over records and have the benefit of learning from other nations who have successfully reduced homelessness.

The jury is in: We now know how to end homelessness.

JUST GIVE THEM A HOME

The answer to end homelessness is so simple: Give homeless people homes.

That’s it: Just give it to them.

No hoops to jump through. No special forms, no supervisors, no drug tests, no questions asked, nothing asked whatever. The home doesn’t have to be anything special- any one-room studio apartment will do.

What these studies have found, universally and conclusively, is that, given this resource so very vital to successful participation in society, most homeless people don’t stay homeless for very long.

See, they weren’t homeless people to begin with. Not really. They were simply people without a home. They weren’t chronically homeless; they were just evicted, kicked out, got sick, got hurt, lost their jobs, fell upon hard times.

More people than you would think are but a single paycheck away from being out on the streets. 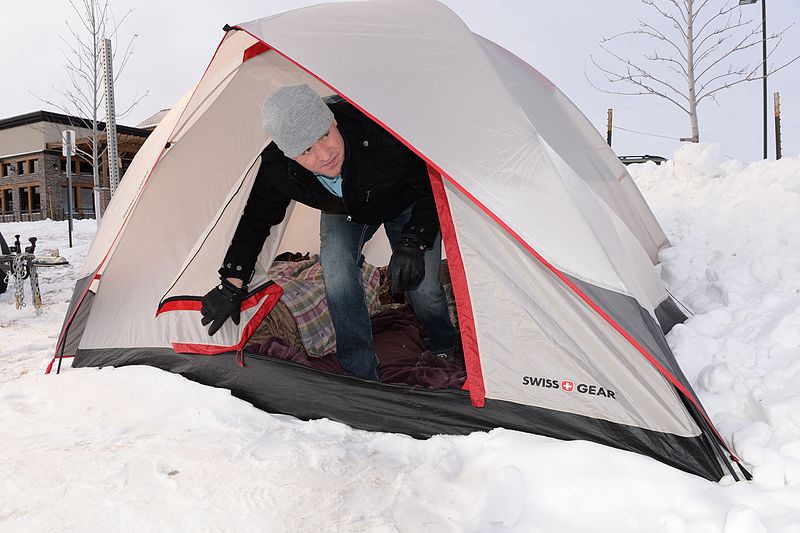 Maybe they were temporarily homeless veterans, back from deployment. Or maybe they were living in California when real-estate prices skyrocketed so suddenly that they were forced to live in their car, until they lost that, too. California real estate is so expensive that families, retirees, and even tech workers are living in cars and vans.

No Address, No Job

Surprise: Giving people who were homeless a home to live in did remarkable things for their job prospects.

Having a stable address helped them do other things, too; apply for aid to go back to college or attend technical school, complete a G.E.D. program, even access drug-treatment resources.

The Majority is Not Everyone

The majority of people in programs that give homes to the homeless don’t need the homes for very long, but that isn’t everyone. Some chronically homeless people in the U.S. population will always need that home.

For a variety of reasons, some of which might be mitigated by other social assistance programs like drug and alcohol dependency treatment, vocational counseling and better mental health care, some people in society will always need help.

The Earliest Days of Philanthropy in America

Warning: This story does not have a happy ending.

When the obscenely wealthy Rockefeller and Carnegies first took it into their collective heads to use their profound riches to make a difference in the world, their aims were noble.

They began their charitable endeavors in all the usual, and usually wrongheaded, ways: Namely giving people in need what Carnegie and Rockefeller thought they ought to have and be grateful for it.

Next, in the natural progression, they asked people in need what they actually needed and tried to give it to them. They built shelters and soup kitchens; they even established organizations like the YMCA.

That didn’t really work either.

Or rather, it did help some people. But the societal problems Carnegie and Rockefeller saw when they peered down from their ivory towers still stubbornly persisted. Some Americans remained homeless, hungry and suffering.

So, early philanthropists decided to ask science to help solve these stubborn problems. Social scientists, sociologists, anthropologists and psychoanalysts of every stripe were to determine why a certain percentage of people in an otherwise wealthy and prosperous society continued to suffer, in spite of new opportunities and social programs aimed at those people most at risk of falling into indigence and extreme poverty.

Here is where it gets dark.

The answer, was that a certain percentage of the population would always need help in society, that a leg-up would never do for them what it might do for others and that these unfortunates would, for various reasons, always be dependent on some kind of assistance, be it private or public.

And that’s when early philanthropy in America went from trying to help those in need to eliminating them from society altogether.

If the well-meaning early philanthropists wanted to truly end homelessness and extreme poverty in America forever, they were going to need to do more than just build a shelter, or even an organization of shelters.

To truly end generational cycles of suffering and extreme poverty, the problem would have to be dealt with at the root, not the stem.

Extreme poverty was to be bred out of the U.S. population. This was not exactly a new idea. It was only a variation on an extremely old idea:

Plenty of people throughout history have come to this conclusion. They are always wrong.

The French proletariat used the guillotine on the hated aristos; France is not a just and equal, socialist paradise today. Leaders of the Khmer Rouge, on trial in 2018, still maintain, ‘We Only Killed the Bad People’. A conversation about this genocidal tactic goes quickly from “where do I begin?” to “where does it end?” to “please don’t tell me any more, I’m begging you.”

Let’s just all please accept that you can’t kill or eliminate your way to peace and prosperity. It’s been tried. And tried.

Extreme poverty and the chronically homeless aren’t going away, any time soon. The poor will always be with us. What should we do about it?

In a Representative Democracy of over 300 million people from a wide array of ethics systems, who wins? How does the government determine which values-system should prevail?

The Morality of What Works

Facing reality: This isn’t really a choice of the moral hierarchy between “helping the poor” and “earning your keep”.

This is a question of the moral hierarchy between paying a little to solve the problem, or paying a lot more not to.

Cost of a Home vs. Cost of Treating Chronic Homelessness

The truth is that you are already helping the chronically homeless every single day, whatever your beliefs-system. Chronically homeless people get sick more often, suffer from more injuries, more drug and alcohol overdoses; they go to the E.R. more often and that costs money. A great deal of money.

They also go to jail more often and that costs money, too.

Giving housing to the homeless is three times cheaper than leaving them on the streets.

The morality of what works is a much easier and more strait-forward determination for a government to make.