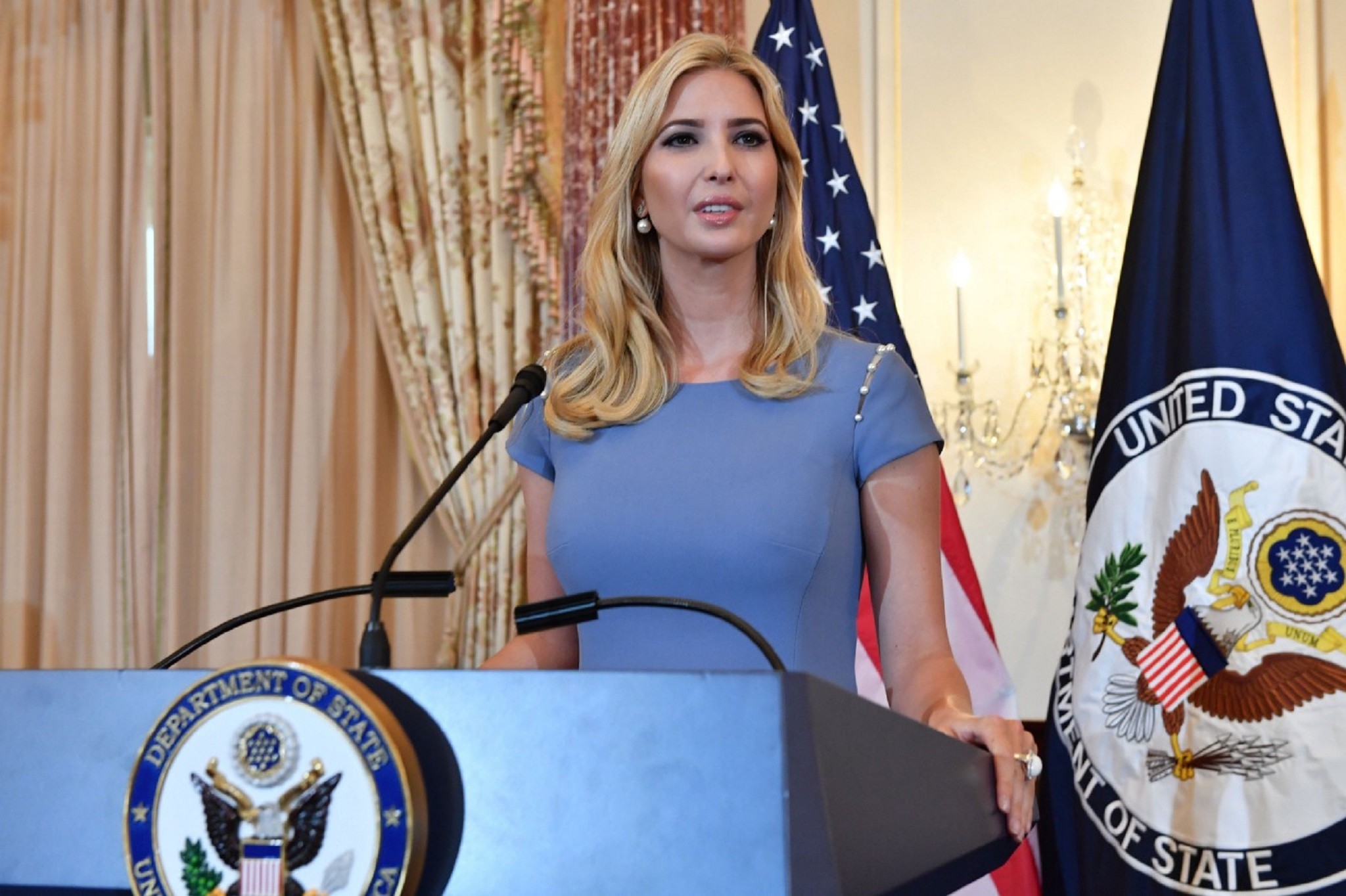 Advisor to the President Ivanka Trump joins Secretary of State Rex Tillerson to deliver remarks at the unveiling of the 2017 Trafficking in Persons Report Launch Ceremony at the U.S. Department of State in Washington, D.C., on June 27, 2017. [State Department photo/ Public Domain]

“I’d vote for a woman, just not that woman.”

Sarah Palin was too dumb. Hilary Clinton was too establishment- and a fake feminist. Nancy Pelosi was too old. Alexandria Ocasio-Cortez is too young- and dumb. Elizabeth Warren is too nice- and fake. Amy Klobuchar is too mean. Kamala Harris is too wishy-washy. Kirsten Gillibrand is too bossy.

Michelle Obama is too Hollywood. Ivanka Trump is too…blonde.

If all else fails, there is always the good old junior high bully standbys; looks and clothes. Just ask Sarah Huckabee Sanders or Kellyanne Conway.

Is any woman in politics good enough for America? Other countries have and have had female leaders, female rulers, female presidents. Why not the U.S.?

In the current field for Democratic presidential nomination, women are perhaps making the best showing they ever have. And yet…

And yet, the male candidates are out-fundraising the women at every turn. Why? The right was willing to unite behind the McCain ticket that included Sarah Palin.

Will the left be willing to go one better and unite behind a female nominee for President in 2020?

Do Democratic donors not think a woman can win against Trump? Or, is it, as it always seems to be, the current crop of female candidates just…aren’t…quite…right. For some reason.

Is it the women in politics? Or is it us?

Aristotle, bless his heart, put women's brains on par with the brains of dogs and horses. Confucius, for his part, barely considered women human beings, either. Gautama Buddha himself lamented, “If it were not for women being admitted into our order, my teachings would have lasted 1000 years; now they will not last 500.”

To Martin Luther, “The words and works of God is quite clear, that women were made to be wives or prostitutes.” Napoleon agreed wholeheartedly, adding, “Nature intended women to be our slaves. They are our property.”

Disaffected youth are prone to Nietzsche, with his aesthete ‘God is dead.” Unfortunately, Nietzsche also said: “When a woman has scholarly inclinations there is usually something wrong with her sexuality.”

Albert Einstein thought giving his wife a list of specific rules, like ‘stop talking to me when I request it,’ would help his marriage. Vonnegut, had this little gem: “Educating a beautiful woman is like pouring honey into a fine Swiss watch: everything stops.”

Once there was a television in almost every home in America, there became more examples of a deeply embedded, cultural identity of sexism than can possibly be counted. By the standards of today, some mainstream movies made two-decades ago, or even ten years ago, are too cringeworthy to watch.

The era of #MeToo has made visible some of the inevitable wounds of cultural attitudes like these, enshrined for generations and reinforced over and over by everything from religious strictures to movie stereotypes.

Like the micro-plastic byproducts of our single-use lifestyles, strewn from the bottom of the lowest Marianna Trench in the Pacific Ocean to the air in the French Pyrenees Mountains, sexism is everywhere we look in America.

Once the agricultural revolution happened, humanity fundamentally changed. Our entire modern civilization began when humans learned to grow and harvest more crops than they could immediately eat.

Surplus crops meant supporting more people in a stationary place, instead of migrating in small numbers supported by the land. Larger stable communities of humans led to faster exchange of ideas and humans went from the hand-ax to the world wide web in 10,000 years or so.

But it led to something else, too.

An abundance of grain was very valuable to a community, something that needed protection from outsiders. That meant brute physical strength.

Brute strength hadn’t meant as much until that point. Endurance, intelligence and overall health were likely far more important. That put the women of the tribe on mostly equal terms with men. Maybe even slightly superior to men.

Early societies were most likely matriarchal; before the onset of animal agriculture, early men and women didn’t likely recognize the male role in producing children. Hence, so many early figures of ‘mother goddesses’.

Physical strength wasn’t as important because in a mostly-gatherer society, there is nothing to protect; a tribe of humans living in this way has only what they can carry, and only what food the land provides. And since even the strongest man couldn’t survive without the tribe, that meant getting along, not getting into fights.

Greater numbers of humans living all together, producing a surplus of crops meant some of us could do, for the first time, literally anything other than farming; medicine, science, arts. It also meant some of us needed to protect the surplus crops; especially in times of drought or other privations.

That meant physical strength. It also meant the beginning of an arms race that has brought humanity from the bow and arrow all the way to the brink of the thermonuclear destruction of every living creature on the planet. And, God help us, beyond.

The early surplus crops also required administration; not just someone to guard them, but someone to manage them. That is why the first written human records are…tax records. Because, of course they are. That is also why we know so much about the ancient Egyptians today; they were nothing if not a nation of meticulous accountants.

In neolithic times, once the tribe had settled into a stationary community with surplus crops to protect, physical strength suddenly became much more important to society. Women, for the first time, couldn’t participate equally in a common activity; warfare.

Worse, men had noticed a pattern in how domesticated animals mated, and after an average span of time, produced offspring. Matrilineal family lines were replaced by patriarchal ones. Dominating women to ensure patriarchal lineage, for the first time, became paramount.

The men performing best in warfare, the strongest, were most likely to live to produce offspring. Now, 10,000 years later, here we are. Sexism isn’t a present-moment battle, it isn’t a future battle; it is a battle against the past. A last vestige of a long ago age during which might made right.

Why can’t we do anything about it?

Brain science has revealed that Aristotle was fundamentally wrong about women’s brains. Pema Chodron has proven the Buddha wrong about female Buddhists. Napoleon, Nietzsche, Confucius, Einstein; all wrong about women. And, in Napoleon’s case, Waterloo.

We all know it takes brains to survive in today’s world; not bench presses. We know MMA champion Georges St. Pierre could absolutely demolish Mark Zuckerberg in a street fight; we all know who’s power and bank account we would rather have. We all know brute physical strength is the only measurement by which women can be declared in any way ‘the weaker sex’.

So, why can’t the U.S. have a female president?

Join us tomorrow for the second part of this series and let’s examine the left’s relationship with Ivanka Trump, her work to empower women around the world and the idea of a female conservative president.