The Impeachment Show Limps On

Does Trump seem like someone cowed by impeachment efforts? 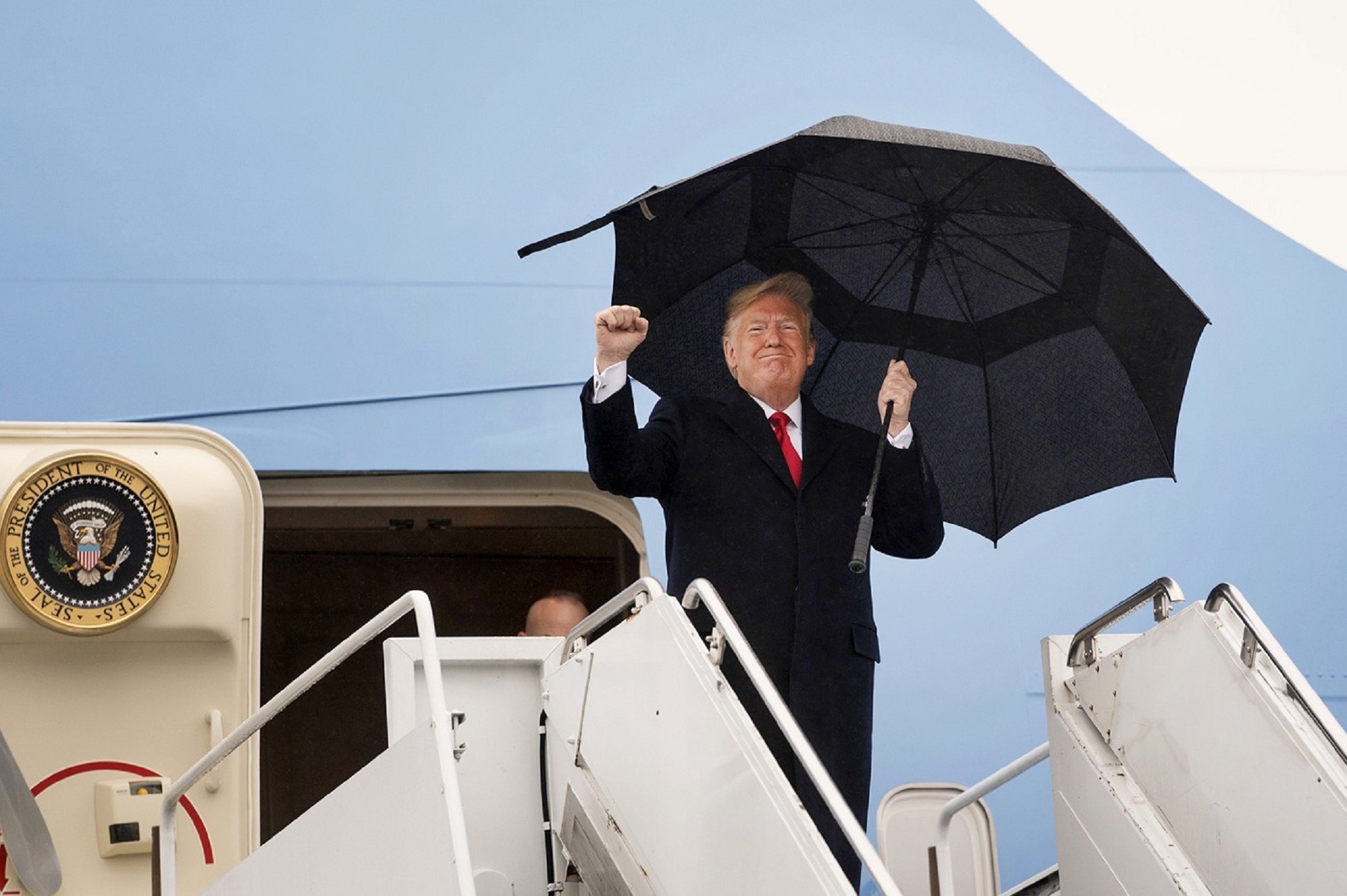 Viewing House impeachment efforts with the jaundiced eye of post-Mueller Report weariness, it is difficult to say which is more surprising:

That Democrats have somehow managed to convince their voters and acolytes that what is happening with impeachment is any way a win for Democrats or that the press is still willing to believe them.

Newly echoing in liberal echo chambers across the internet at large is the smug theory that House Democrats are somehow letting impeachment crash and burn on purpose. Democrats are working overtime to convince weary voters “they meant to do that”.

The idea, of course, being that voters will hold Senate Republicans responsible for the failure of House Democrats to put together a compelling impeachment case. By casting the Senate trial as rigged in favor of the Republican Majority- which it is- House Democrats must hope to salvage some sort of a benefit in the court of public opinion.

But since House Republicans have been howling for weeks that the House impeachment process was rigged in favor of the Democratic Majority- which it was- this sounds more like a schoolyard case of sticks and stones than a compelling legal argument based on constitutional law.

But the likelihood of those swing voters being impressed with the failed impeachment efforts of Democratic House leadership, or indeed the impotent efforts of Senate Democrats in the minority is a long shot- at best.

A better strategy might have been to aggressively target health-care affordability and access- as Mike Bloomberg is doing in recent ads. Bloomberg is embracing this message for a reason; he is running on his own dime and he doesn’t want to waste a single one.

He is messaging on health care affordability because healthcare affordability, while nowhere near as salacious as the impeachment of a sitting president, is what voters actually care about in 2020.

Impeachment is not working in the court of public opinion, either.

Oh, it’s certainly true that liberal Democrats and progressives who hated Donald Trump in the first place, and planned to vote for a ham sandwich if it was running as a Democrat against him, are more convinced than ever that Donald Trump is a crook of the highest degree.

As the embarrassing incident involving journalists irresponsibly reporting on Trump loans co-signed by Russian oligarchs proves, Democrats and the press are willing to believe almost anything about Donald Trump.

As long as it’s bad.

Watching liberal publications painstakingly try to torture this whole thing out to favor Democrats is like watching Cirque-du-soleil acrobat twist themselves into an impossible knot. What seems like dishonesty may be only deep disenchantment and delusion about the strength of the Democratic case against Trump.

Take Slate, for instance. Here is how “Democrats Are Mobilizing Their Plan to Lose the Impeachment Trial” begins:

This is untrue; there have already been impeachment proceedings conducted in the House that included witnesses, evidence, and documents. That none of these proved compelling enough to win a bi-partisan consensus on impeachment doesn’t mean it didn’t happen.

Here is the second sentence:

“Such a trial will likely result in the acquittal or the dismissal of charges that the president desperately craves.”

Another naive untruth. The result of the Senate trial of President Trump was always headed toward dismissal in the Senate. How House Speaker Nancy Pelosi has managed to convince her Democratic cohorts in the press that she has the power to influence the outcome of the Senate trial is a mystery.

The second part of the above sentence is an untruth as well, and a dangerous presumption that is hurting Democrats badly.

Who told Slate that President Trump desperately craves an acquittal or dismissal of charges?

Does he seem like a man cowed by impeachment efforts?

The Trump campaign has been raking in record-breaking amounts of cash since day one of Nancy Pelosi’s most recent ill-conceived, poorly-executed attempts to impeach him. Trump voters, and judging by the polling numbers a goodly number of independents too, have not forgotten the broken promises of the Mueller investigation.

They have not forgiven Rachel Maddow for deliberately misleading the public on the contents of the Mueller Report. Trust in the media, and in House Democrats impeachment efforts, are at an all time low.

Vindicated by the Mueller Report, this toothless Ukrainian impeachment business has been empirically great for Donald Trump.

United support from his fellow Republicans.

Thanks to Pelosi’s disastrous impeachment efforts, Trump has achieved this. Even vocal “Never Trumpers” like Sen. Mitt Romney have fallen in line. Before Ukrainian impeachment, uniting Republicans behind Trump was thought to be well-nigh impossible.

Impeachment gave Trump something else, too: Traction in swing-states, and in the Rust Belt, and with working class voters who have been drifting away from the Democratic Party for years as their jobs were shipped overseas.

Impeachment isn’t popular in these areas and it never has been. Now, Democrats in Congress and Democratic Senators from swing districts are nervously eying Trump’s massive campaign war chest.

The Trump machine will be coming hard for each and every vulnerable congressional member elected to districts in 2018 that Trump won in 2016. These Democrats are much more vulnerable for supporting impeachment efforts.

Trump may not manage to turn the House red in 2020- not that be won’t try- but every Democratic Congressperson who supported impeachment from a swing district will not be coming back to Congress in January 2021.

Trump even managed to score one Democrat convert to the Republican camp.

Why would Trump want impeachment to end?

As far as he is concerned, the further Democrats dig in to this loser, the better.

President Trump has gone about his business as usual, stacking up wins with strong jobs reports, a booming economy, record low unemployment, new trade agreements, and two strategic, high-profile wins in the war against terror. Trump’s base is as happy as a bunch of clams.

Trump Tweeting nothing but an American flag to cryptically announce the death of terror General Soleimani played perfectly with Trump’s base.

Democrats and the press defending the guy, even better.

With Democrats, in leadership and in the press, completely distracted by impeachment- or whatever incendiary tweet Trump wants them fixated on that day- that fact that his new “remain in Mexico” asylum rules have proved more effective than any wall has gone almost unnoticed.

“Remain in Mexico” asylum cases are granted asylum in the U.S. about .11% of the time, so far. Without impeachment as a distraction, this might actually be news.

A long, drawn out Senate trial suits Donald Trump perfectly for another reason, too.

Two of his fiercest competitors for the presidency are Senators. In the event of a lengthy Senate trial, both Elizabeth Warren and Bernie Sanders will be stuck in Washington for months. They will miss out on a critical campaign crunch time while Biden, Buttigieg and any other Democratic contenders still in the race hit the campaign trail hard.

Democrats may be hoping the public will conveniently forget that it was the House’s job to call witnesses and that they opted not to do it. House Democrats could have easily appealed to the courts to force John Bolton to testify, which he has repeatedly indicated he will do if served with a subpoena.

Sen. Schumer is absolutely right: What the House Democrats did on impeachment was a complete farce.

That House Democrats now expect Senate Republicans to serve up Donald Trump on a silver platter when they couldn’t, or wouldn’t, do so themselves is laughable.

Democratic spin doctors can insist that defeat is really victory all they want.

Donald Trump is laughing all the way to the bank.

Why Are So Many Incumbent Democrats Retiring at the Midterms? Oct 15, 2021

The Working Class Braces for a Hard Candy Christmas Oct 14, 2021