The Ghost of Hillary Clinton’s Emails is Haunting Joe Biden

Is the Hunter Biden laptop a Russian disinformation campaign or just a dirty political trick? 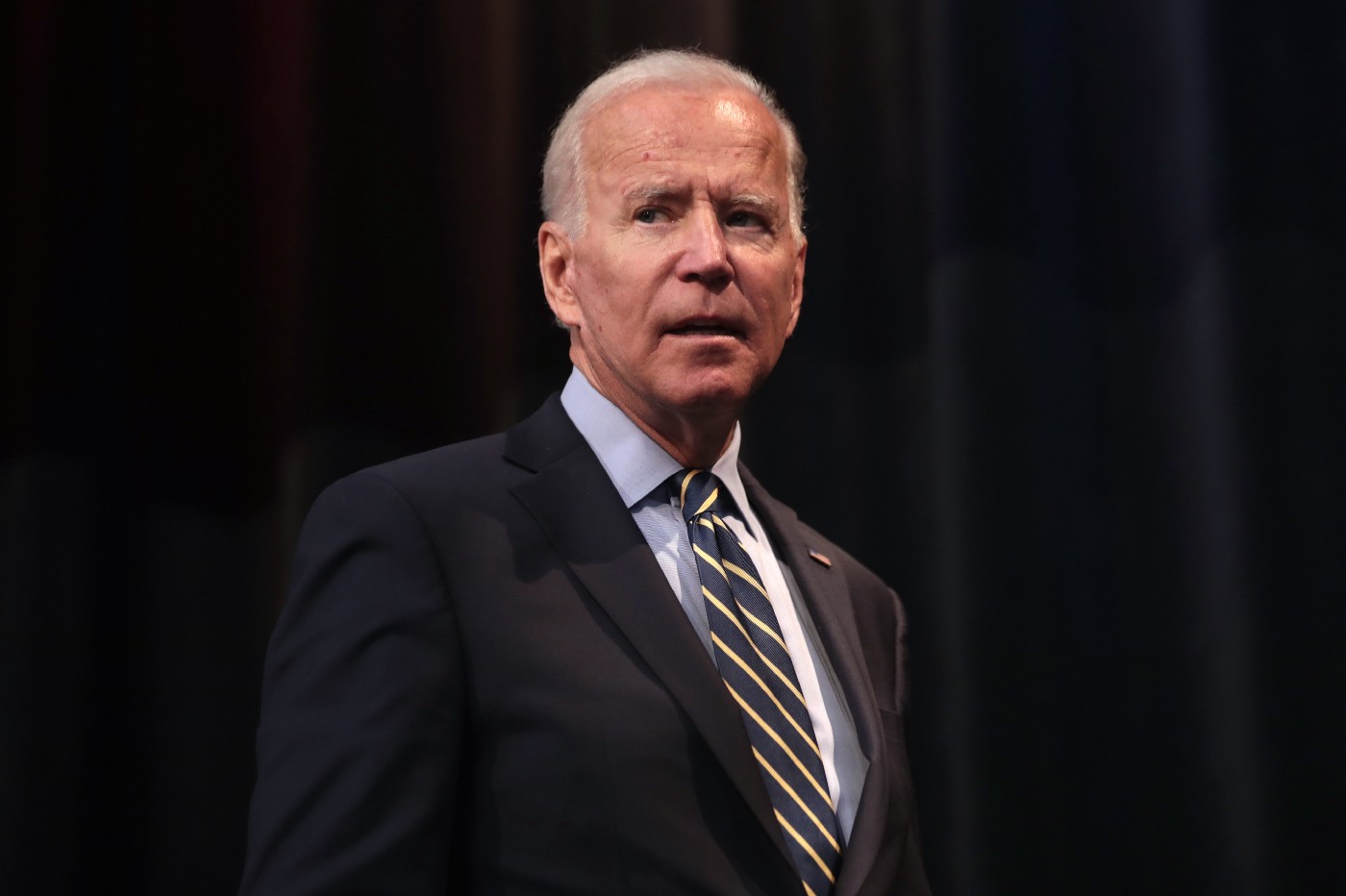 Former Vice President of the United States Joe Biden speaking with attendees at the 2019 Iowa Federation of Labor Convention hosted by the AFL-CIO at the Prairie Meadows Hotel in Altoona, Iowa. August 21, 2019. (photo: Gage Skidmore)

Ah, 2016. It was a simpler time during which voting Democrats had no idea how much Hillary Clinton’s use of a private email server, and hacked DNC emails revealed by Wikileaks, would damage Democratic chances.

To liberal progressives, it was nothing; a tempest in a teapot, a non-scandal that was roundly mocked and soundly dismissed.

Then, Donald Trump won, and everything we thought we knew about what influences the outcomes of elections went out the window. In the aftermath, Democrats wondered if Hillary Clinton should have dealt with the emails scandal more proactively.

Ignoring it certainly did not make it go away. All these many years later, “Hillary Clinton’s emails!” still pops up in focus groups and whenever Hillary Clinton’s name is mentioned, far more often than Democrats ever would have dreamed in 2016.

Dismissing the whole thing out of hand as a Russian disinformation campaign may be tempting. Even if, as the Washington Post concluded in its pages yesterday, the emails turn out to be genuine, it might be safer to ignore such stories anyway.

If the story doesn’t go away, however, Democrats may be setting themselves up for another nasty surprise on election day.

On Monday, Director of National Intelligence John Ratcliffe said the information contained on Hunter Biden’s laptop “is not part of some Russian disinformation campaign.”

“It’s funny that some of the people who complain the most about intelligence being politicized are the ones politicizing the intelligence,” Ratcliffe said during an interview on FOX Business. “Unfortunately, it is Adam Schiff who said the intelligence community believes the Hunter Biden laptop and emails on it are part of a Russian disinformation campaign.”

During an interview with CNN, House Intelligence Committee Chairman Adam Schiff suggested the “smear on Joe Biden comes from the Kremlin,” amid claims the emails are part of a Russian disinformation campaign.

“We know that this whole smear on Joe Biden comes from the Kremlin,” Schiff said on CNN. “That’s been clear for well over a year now that they’ve been pushing this false narrative about this vice president and his son.”

Ratcliffe responded to Schiff’s claims as “simply not true.”

“Without commenting on any investigation that they may or may not have, their investigation is not centered around Russian disinformation and the intelligence community is not playing any role with respect to that,” Ratcliffe continued. “The FBI has had possession of this.”

The New York Post published emails last week that the Post claims were recovered from a laptop purported to have belonged to Hunter Biden. The laptop was allegedly dropped off at a Delaware computer shop and never retrieved.

The emails allege that Hunter Biden introduced his father to Vadym Pozharskyi, a top executive at Ukrainian energy company Burisma Holdings. In an email dated April 17, 2015, Pozharskyi thanked Hunter Biden for the “opportunity” to meet his father.

Another email appeared to show an outline for a “provisional agreement” under which 80 percent of the shares in a Chinese energy firm would be split among four people whose initials corresponded with the recipients.

One of those recipients, a former business partner of Hunter Biden, has since come forward to publicly corroborate that the emails contained on the laptop are genuine and implicate Joe Biden in the scheme.

A senior U.S. intelligence official later confirmed Ratcliffe’s comments on the absence of such intelligence, reported cofounder of “The Federalist,” Sean Davis.

“Ratcliffe is 100 percent correct. There is no intelligence at this time to support Chairman Schiff’s statement that recent stories on the Biden’s foreign business dealings are part of a smear campaign that ‘comes from the Kremlin,’” the senior U.S. official told The Federalist. “Numerous foreign adversaries are seeking to influence American politics, policies and media narratives. They don’t need any help from politicians who spread false information under the guise of intelligence.”

The committee has remained in contact with the individual who provided the emails, Committee Chairman Ron Johnson, R-WI, told Fox News.

“We regularly speak with individuals who email the committee’s whistleblower account to determine whether we can validate their claims,” Johnson said. “Although we consider those communications to be confidential, because the individual in this instance spoke with the media about his contact with the committee, we can confirm receipt of his email complaint, have been in contact with the whistleblower, and are in the process of validating the information he provided.”

Johnson wrote in a letter to FBI Director Chris Wray that a whistleblower contacted his committee claiming he possessed a laptop belonging to Hunter Biden and turned it over to the FBI. Johnson asked the FBI to confirm certain details to validate the claim, but the bureau has refused to confirm or deny any details about the laptop.

“The FBI has a duty to inform us. If they believe this was maybe Russian disinformation, they should give us a defensive briefing,” Johnson told Fox News. “If, for example, they also believe that what information this whistleblower gave us is fraudulent, that would also be a crime, and FBI should tell us that.”

“Why did they sit on it? Are they covering up just because Hunter Biden might be engaged in things that also maybe should have been investigated and possibly prosecuted?” Johnson continued. “Do we have two systems of justice: one for Democrats and one for Republicans? One for the well-connected versus one for the rest of the Americans?”

Biden has claimed on various occasions that he’s “never spoken to my son about his overseas business dealings.” Both Democratic presidential nominee Biden and his campaign have called The New York Post’s reporting a “smear campaign” orchestrated by Trump lawyer Rudy Guiliani. Joe Biden’s campaign has said the alleged meeting with Pozharskyi did not show up on his official schedule, but has not confirmed nor denied the authenticity of the emails.

Are the emails genuine? The issue has become clouded over concerns about election fairness, censorship, and media bias. After three years of pushing accusations against the Trump administration which later proved unsubstantiated by the Mueller Report, the mainstream media has refused to touch the Biden story, dismissing it out of hand.

This may prove a mistake. Ignoring Hillary Clinton’s emails did not make the problem go away, and it hurt Clinton in the run up to Election Day. The Democratic Party, and high-profile members of it, are falling into the same trap into which they fall time and again.

In tying to help Joe Biden, well-meaning Democrats wind up hurting him. Social media giants, in an attempt to mitigate the political fallout from this story and its impact on the upcoming election, tried to ban to story- and succeeded in doubling its reach.

Major media outlets think they are helping Joe Biden by refusing to cover the story and lay to rest these accusations against the Bidens which have not only come from the right. Plenty of progressives objected to Joe Bidenduring the primary on the basis that he is a career politician whose family has profited from his position. Biden is vulnerable on the corruption point.

By ignoring the story, mainstream media outlets are letting the right control the narrative totally. Far from helping Joe Biden, it may be what ultimately sinks his campaign.

Because tomorrow is another test of Joe Biden’s campaign, and the media’s preference for it. The ghost of Tara Reade is coming back to haunt the Democratic Party. Her tell-all book about Joe Biden is due out tomorrow and promises to be a best-seller.

For the media, and Big Tech, to make another attempt to dismiss without examination or squelch stories unfavorable to the Biden campaign is likely to turn more undecided voters away from the Democratic Party than toward it.