The Ghost of Derek Chauvin is Coming Back to Haunt Us

The trial that terrorized a nation isn’t over: It has only just begun. 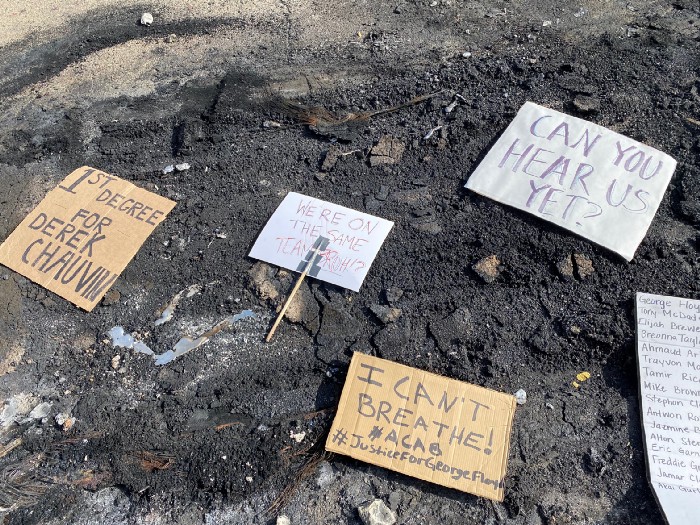 After nearly a year spent reeling in the aftermath of George Floyd’s murder, and in spite of a guilty verdict, Derek Chauvin is neither gone nor forgotten.

A collective sigh of relief greeted the news of his conviction on all charges two weeks ago. Across the nation, large cities had been taking precautions against rioting, in the event of a not-guilty verdict. The Precautions, as it turned out in most places save Portland, which cannot kick its habit of near-nightly unrest, whatever happens, proved unnecessary.

Our national nightmare is far from over, however. Like the monster in a horror movie, it was only pretending to be dead.

Derek Chauvin, though he has yet to be sentenced, has already filed a motion for a new trial, because of course he has. Fortunately for Chauvin, and unfortunately for the rest of America, certain prominent Democrats, progressive activists engaging in criminal activity, and imprudent jurors are giving him ample grounds to do so.

“I did not want to go through rioting and destruction again and I was concerned about people coming to my house if they were not happy with the verdict,” said one alternate juror in a television interview, perhaps unwisely.

Factcheck.org can try and gloss over this statement with technicalities however they’d like. It won’t change the fact that it is likely to appear in future legal briefs filed in the case on behalf of the defendant.

As other Medium authors of the progressive persuasion have concluded, Rep. Maxine Waters didn’t do much for the cause of justice when she chose to attend a protest during closing arguments in the Chauvin case, flanked by bodyguards- while flouting curfew- and make incendiary statements any first-year law student could construe as threatening.

Was it jury intimidation? Derek Chauvin’s attorneys, the one he has now and the ones he will likely have in the future, certainly think so. The judge who presided over Chauvin’s first trial thought they might have a point, too. He said at the time we hadn’t heard the last of Rep. Waters’ undue influence on this case.

And alas, we haven’t. Chauvin has already filed a motion for a new trial based on these factors, and others.

The most compelling bit of evidence in favor of a new trial for Derek Chauvin was gifted to him this week by one of the 12 jury members at his trial. This juror was photographed last year at a George Floyd protest wearing a Black Lives Matter tee shirt, which would probably have precluded him as an impartial juror, had he disclosed it during jury selection.

He is in the system, and the system isn’t through with him yet by a long-shot. But as such, he has certain legal rights. One of those rights is the right to appeal his conviction. Appeals are common in the legal system. Many come to nothing. If a former jury member reveals something, even misspeaks; anything they say can and will be used by a defendant to make their case.

Keen legal observers, especially the progressive ones, can’t help but note this episode as part of a growing phenomenon.

The new progressive left has a tendency to turn a victory into a defeat by achieving a desired result, then going much too far in order to…no one seems quite sure. Make a point? Shock?

Record a grown man making threats and assaulting a teenage boy, good. Use that footage to see that he is prosecuted for assault, also good.

Shame him on social media, potentially problematic, as the mob does occasionally get it wrong, and the court of public opinion is far more unreliable than the U.S. justice system- but still within the framework of social acceptability for now, if only just.

Find his address, send a group of angry people to his house, to the point that he, his wife, and two young children, have to be evacuated by police, bad.

Build a memorial at the site where George Floyd died, good. Peacefully assemble at the court house, march through the streets, all good. Daub threatening messages in red paint and leave a severed pig’s head at the home of a witness for the defense, bad. Very bad.

Calling yourself an activist isn’t a license to wreak as much havoc as possible then dismiss any criticism of your methodology as “tone policing”. It is more like “effectiveness policing” and real activists have a responsibility, not to mention a duty, to do it constantly.

Not only are these tactics well beyond the limits of the law, they are hurting the very people they claim to want to help. As some progressives have noted with growing alarm, these types of activities roll back progress.

George Floyd deserved justice; he got it. Nothing can bring him back. Derek Chauvin could receive the death penalty and it wouldn’t change what happened.

The most any human system of justice can offer is punishment of the guilty; restitution. Restoration is well beyond it, and no amount of marching or number of severed pigs heads can change that.

After his guilty verdict, Derek Chauvin faces decades in prison, probably life. He has lost his job, his wife, his freedom, his entire life. He held his own neck under his knee, nearly a year ago, had he but known it. He snuffed out his life that day along with George Floyd’s.

Cops aren’t well-liked in prison. George Floyd’s murderer won’t have a moment of peace in jail. He’s probably on suicide watch even now.

Not one of us would trade places with Derek Chauvin; not for a fortune in bitcoin. Because all the bitcoin in the world wouldn’t save you, would it? Nothing could.

Unless fund-raising politicians, law-breaking “activists”, and chatty former jury members gave you a ray of hope. Could your conviction be overturned on appeal? Might you get a new trial, another chance?

And so, for the next year, probably longer, Derek Chauvin, though he scarcely deserves it, has hope where he once had none. In the category of own-goaling, of giving aid and comfort to the enemy, this is difficult to top.

Derek Chauvin was facing down a conviction on three counts which could have seen him imprisoned for as many as 40, 25, and 10 years respectively. If not served concurrently, it would have meant imprisonment for life.

Judge Peter Cahill, who will soon pass a sentence, would be well within the law to throw the book at Chauvin. No one would fault Cahill for it. The jury found Chauvin guilty, after all. And considering the aggravating factors in the case- that is, if the murder victim was “treated with particular cruelty,” or if the murder occurred in the presence of a child, as three of the eye-witnesses that day were, the harshest sentence is well warranted.

Derek Chauvin was facing down all these things; now he is facing down a bolstered appeal process using arguments he wouldn’t have otherwise had, with fresh hope.