The End of a Civil Rights Era

With the passing of John Lewis ends an age of American heroes. 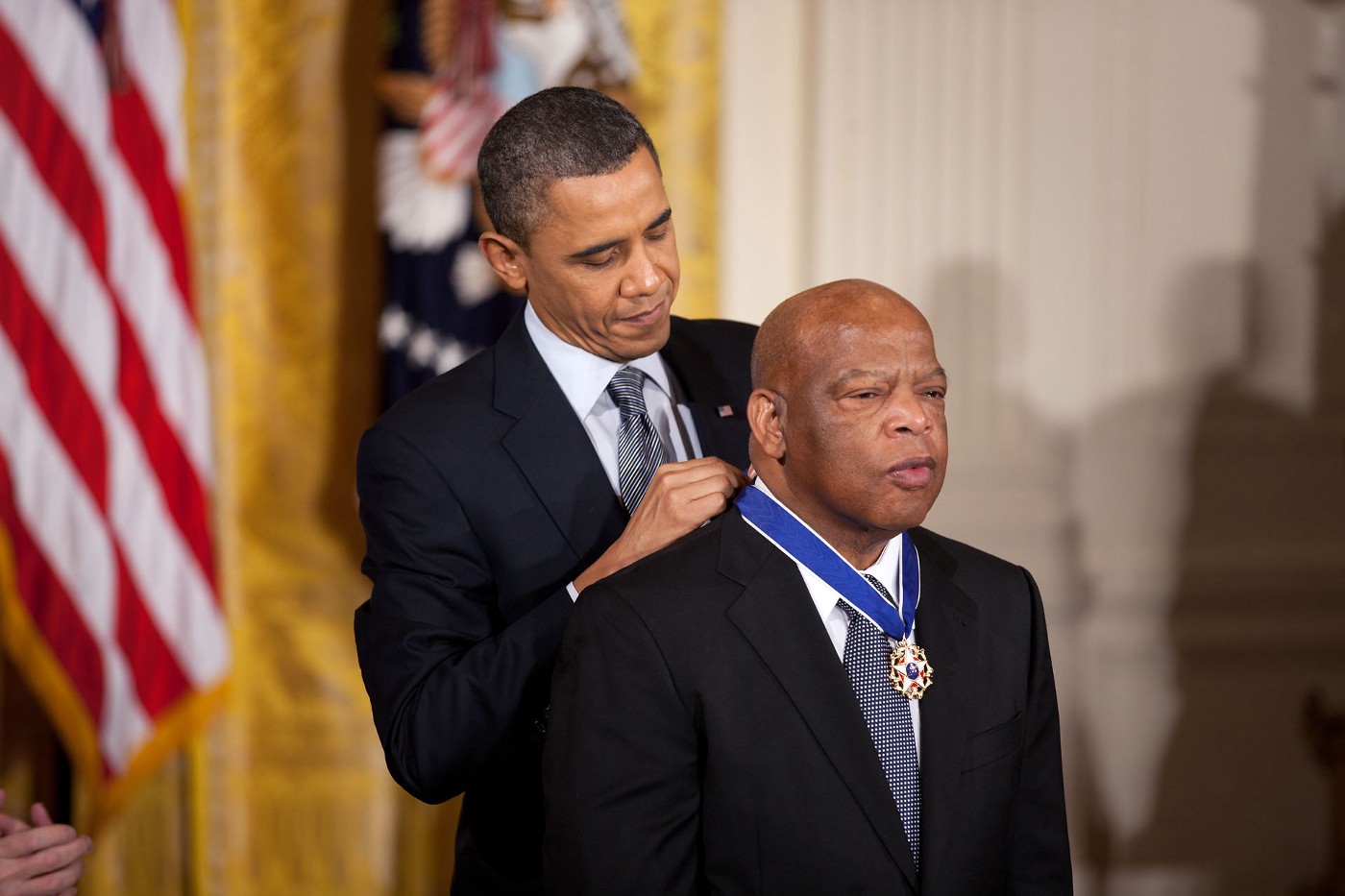 President Barack Obama awards the 2010 Presidential Medal of Freedom to Congressman John Lewis in a ceremony in the East Room of the White House February 15, 2011. (Official White House Photo by Lawrence Jackson)

“People must have the desire to get out there, to push and pull, and to never give up, to never get lost in a sea of despair, but to keep the faith.” — Congressman John Lewis

In the midst of the contentious national debate about U.S. history- it’s traditions, its founders and its monuments- civil rights leader and longtime Alabama Congressman John Lewis has died after a long battle with cancer. He was 80 years old.

That he so long stood as the last bastion of American Civil Rights era heroes was a benefit to the nation he served so diligently, and to all of humanity striving towards world peace. He was a man who walked alongside Dr. Martin Luther King Jr. into the pages of history, who went on to distinguish himself with a long and fruitful career in public service.

John Lewis was a man of humble beginnings, as the truly great so often are. The son of Southern sharecroppers, Lewis felt keenly the bitter sting of segregation, racism and Jim Crow. That he dedicated his young life to fighting against these injustices is a testament to the man, and to those who raised and influenced him.

At a time when it would have been far easier, safer, to do nothing, John Lewis placed himself in harm’s way time and again. If someone was to be hurt for the cause of freedom and equality in America, John Lewis had determined it be him.

He marched from Selma to Montgomery for voting rights alongside other key crusaders of the Civil Rights movement. Lewis was one of the first Freedom Riders, determined to integrate American society at every level.

Yet, Lewis, unlike Dr. King and so many others, did not pay the ultimate price for his activism. John Lewis emerged from the Civil Rights era, not unscathed- certainly not unharmed as photos of John Lewis’ bloodied countenance were integral in softening public sentiment towards racial justice at the time.

John Lewis bore the scars of his beating at the hands of police in 1965 for the rest of his life.

“He loved this country so much that he risked his life and its blood so that it might live up to its promise. Early on, he embraced the principles of nonviolent resistance and civil disobedience as the means to bring about real change in this country.” — former President Barack Obama

To serve his country, and his countrymen, John Lewis entered the next phase of his activism at the close of the civil rights era. Serving in Congress was a natural extension of his commitment to real change.

John Lewis never abandoned his activists roots, however. Lewis famously boycotted the inauguration of George W. Bush in 2001. He was arrested in 2004 and 2009 for protesting the genocide in Darfur outside the Sudanese Embassy in Washington, D.C.

Throughout his decades of service in Congress, Lewis fought for equality, justice and fairness in government and in all aspects of public life. The job he chose, the charities he supported, the causes he raised up, the institutions he elevated and the politicians he stood beside during their campaigns; John Lewis was the Civil Rights era’s North Star. He brought every ounce of his commitment to the people he served.

John Lewis, along with Dr. Martin Luther King Jr. and a few others, enlisted a new generation in the fight for Civil Rights. Before his fight was finished, John Lewis received the Presidential Medal of Freedom for his efforts during the Civil Rights era and beyond.

That Presidential Medal of Freedom, the highest honor a civilian can receive, was draped around Rep. John Lewis’ neck by the first African-American President of the United States.

President Barack Obama was someone John Lewis helped elect in more ways than one. Lewis was a Civil Rights pioneer, yes. But Rep. John Lewis was one of the first prominent Democrats to switch from Hillary Clinton to Barack Obama in 2008.

“If someone had told me this would be happening now, I would have told them they were crazy, out of their mind, they didn’t know what they were talking about…I just wish the others were around to see this day. To the people who were beaten, put in jail, were asked questions they could never answer to register to vote, it's amazing.” — Rep. John Lewis, 2008

John Lewis will be missed by a nation still fighting against injustice.

His contributions should not be forgotten. Nor need we wait to memorialize John Lewis. At a time when the national discussion about monuments is ongoing, adding a Civil Rights crusader like John Lewis, who never received as much credit or recognition as he deserved in life, would be poetic justice.

The statues of confederate generals need not be desecrated by angry protestors; they don’t even need to be torn down at all. Move them to a museum. The Confederacy is long gone, as are its leaders. Surely they have been memorialized in the public square long enough, if indeed they ever deserved to be memorialized at all.

Preserving the faintest echoes of the past while neglecting more recent contributions to society makes little sense, especially in light of expanding definitions and viewpoints that have rendered the legacy of Southern generals fighting to preserve the institution of slavery controversial to so many.

The answer isn’t reduction, but addition. The past cannot be changed or mended; it cannot and should not be reinterpreted to assuage modern sensibilities. But it can, and should, be amended and appended.

Expanding our history to include the perspectives of Americans who haven’t yet had a chance to tell their story, their American history, isn’t a loss at all. It is a gain by any definition of the word.

The inspiring stories of Black Americans like John Lewis should be told in the public square. Let them stand for as long as the confederate generals have now stood.

Then let them too be relegated to a museum, as a diverse new group of American heroes rises to build and improve upon what has been entrusted to them by people like John Lewis.

As new heroes, in their turn, come to more completely represent the ideal that is the United States of America, it is only natural. That the protagonists of America’s future will come in time to be memorialized by a grateful nation themselves is to the credit of men like John Lewis.

It is the legacy that John Lewis has left us: Not the end of the Civil Rights era, but the beginning of a new one. A new generation, inspired by his leadership whether they knew of him or not, taking up the mantle in their turn.

John Lewis never stopped fighting for justice, civil rights, and equality in America; he died in office, never retired from public service. He understood something fundamental about the march for justice.

It must go further than over a bridge; it must do more than sit in the front of a bus. The march for justice is a march across decades, generations; through the pages of history. It is planting a tree knowing you may never sit under its shade. It is starting a work knowing others must finish it.

As John Lewis passes the torch, a million hands rise to take it.