The CHAZ and the CHOPping Block 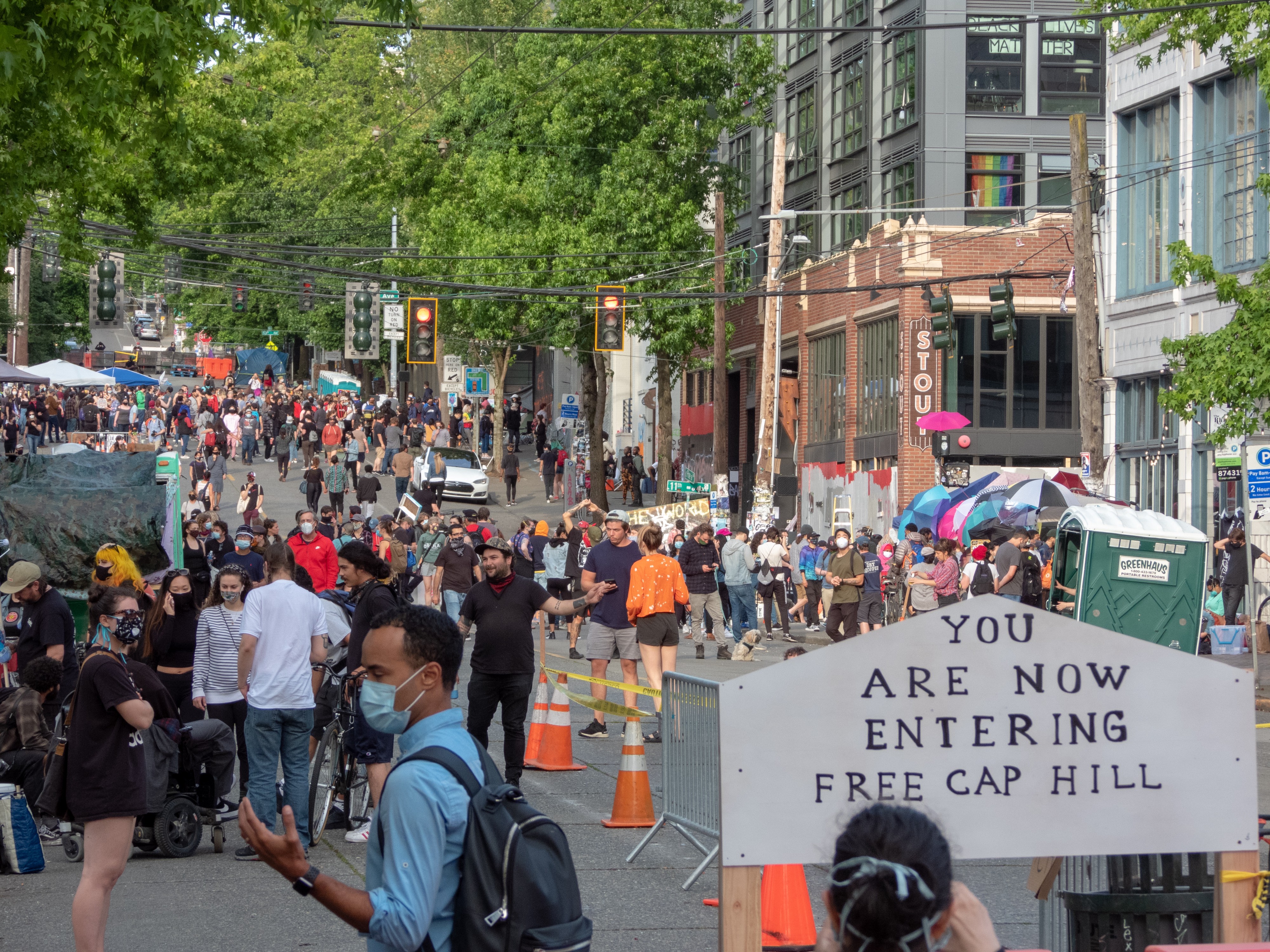 A photo of the Western entrance to the Capitol Hill Autonomous Zone, between 10th and 11th on Pine St. in Seattle, Washington. June 10, 2020. (photo: Alex Glidewell)

The revolution will not be televised.

It will however, be live-streamed, Insta’ed, You-tubed, uploaded, tweeted and memed onto every device and into every living room in America.

Black Lives Matter, a young movement previously on the fringe, has mainstreamed, gone viral, become a household name, gained major political power. All the Kardashians and Kayne West put together couldn’t dream of this level of publicity.

There is an old adage that all publicity is good publicity. Is that still true? It may have been true at a time when publicity was at a premium, and having a famous name was worth the price of infamy.

Today, however, a promising presidential campaign can be destroyed in an instant by a bit of bad publicity, an embarrassing unguarded moment caught on camera. A prosperous company can be sandbagged by a frivolous or insensitive comment made on social media by a low-level executive.

Reputations. They take forever to build and a moment to tear down.

Which is why BLM activists should be deeply concerned about some of the reports coming out of Seattle about the six-block area protestors have cordoned off and initially declared the Capitol Hill Autonomous Zone- colloquially known as the CHAZ.

Though the name has since been changed to the Capitol Hill Organized (or Occupied) Protest (CHOP), it remains a place where policing is off-limits but checkpoints are being conducted by groups of unofficial peacekeepers.

While many media outlets, and many on social media, are eager to paint the CHOP as a lighthearted block party, all community gardens and socially-conscious movie nights, there are ominous signs.

Considering that everyone inside the CHOP, and everyone who manages to enter it, is armed with a video camera and livestream capabilities at all times, there is no point in trying to pretend, or convince others, that the CHOP isn’t devolving into a dangerous distraction having very little to do with Black Lives Matter.

Official policing may be off-limits- and police didn’t even respond to a recent burglary in progress near the CHOP- but groups of “citizen peacekeepers”, some of them armed, detained and searched the burglary suspect.

Checkpoints are being manned to keep unwanted visitors, police, or unfriendly press out of the CHOP. Seattle police say they have received reports of armed guards and potential extortion in the self-declared autonomous zone that includes a now-closed police precinct.

Instead of cooler heads prevailing in Seattle, elected officials have instead fanned the flames of unrest inside the CHOP, diverted attention away from BLM, and devolved into very public political infighting.

Mayor Jenny Durkan has defended the autonomous zone, tweeting “For as long as I can remember, Capitol Hill has been autonomous — it’s always been a place where people go to express themselves freely. Today at the #CHAZ, I spoke with organizers and community about how we can move forward and keep our communities safe, together.”

The Mayor on another occasion tweeted:

“It’s clear @realDonaldTrump doesn’t understand what’s happening on five square blocks of our City. Cal Anderson and Capitol Hill has for decades been a place for free speech, community, and self expression.”

Free speech? Community? Self-Expression? BLM activists are sure to notice that their movement has mysteriously vanished in the Mayor’s messaging.

Mayor Durkan’s statements about the Seattle autonomous zone remaining peaceful were met with conflicting statements from Seattle’s chief of police. Seattle Police Chief Carmen Best had this to say:

“911 response times have tripled in the area. They’ve gone from just over 5 minutes to about 18-minutes. Rapes, robberies and all sorts of violent acts have been occurring in the area and we’re not able to get to [them].”

Though Mayor Durkan has extolled the efforts of CHOP occupiers, and defended the group repeatedly, Mayor Durkan’s attempts at appeasement have hardly been effective.

Seattle Councilwoman, Kshama Sawant, used her position on the council to lead hundreds of protesters into City Hall during the protests, where she reportedly unlocked the building and let 300 people inside to stage an hours-long takeover of the building, calling for the resignation of Mayor Durkan.

Perhaps anxious to get back on message, the socialist councilwoman has voiced her desire to turn the police station at the center of the six-block Capitol Hill Autonomous Zone into a community center.

“Our movement needs to urgently ensure East Precinct is not handed back to police but is turned over permanently into community control. My office is bringing legislation to convert East Precinct into a community center for restorative justice,” Sawant tweeted on Friday.

Sawant has a contentious history with police. Recently, a federal judge threw out a defamation lawsuit filed against Sawant by two police officers over public statements she made in 2016 calling the police shooting of Che Taylor a racially motivated “brutal murder,” though a portion of the officers’ claims are still being upheld.

It is the second defamation lawsuit brought against the Councilwoman. Previously, Seattle landlord Carl Haglund filed a lawsuit after Sawant displayed a poster with a photograph of a rat and referred to Haglund as a “slumlord.” The lawsuit, also brought before Judge Pechman, was dismissed last spring after costing taxpayers over $250,000 to defend.

The clash between Democratic politicians in Seattle has been echoed in other places, most centered around erratic attempts at defunding the police. While prominent Democrats like Rep. Jim Clyburn and House Speaker Nancy Pelosi have been anxious to distance themselves from movements to defund the police, progressive Democrats have been singing a different tune.

Congresswoman Ilhan Omar, D- MN, joined calls for the Minneapolis Police Department to be dismantled as protests have pushed for abolishing and defunding police departments as a response to the death of George Floyd.

In Minnesota, when asked by a reporter what would happen if a city resident were to call 911 during a break-in, Minneapolis City Council president Lisa Bender answered that the question itself was “privileged”.

Whether the question is privileged is moot; this is a question that many voters faced with a measure like abolishing the police department will certainly ask.

Not just privileged white people, either. As if it would be that easy.

Privileged white people, and middle-class and wealthy people in general, will be able to afford their own security systems, video surveillance, security personnel, night watchmen, and gated communities with a 24-hour armed guard; just as they do now.

Working people, economically disadvantaged people, on the other hand, will still have to depend on 911.

It isn’t wrong for them to wonder who will answer 911 in a police-free future and what resources these new dispatchers will have available for community members who urgently need them.

One of the lessons we should have learned from history is being lost in Seattle, in Minnesota, and in other places where efforts are being made on the local government level to defund and deconstruct police departments.

Popular uprisings have taken place before: There have been a couple of major ones in the past few centuries. The French Revolutionaries and the Bolsheviks both led a total overthrow of the previous power systems in their respective countries.

Thing is, things didn’t get better for the regular people after these groups came to power.

The revolutionaries removed the existing power structures, but as sober-minded, objective historians with the benefit of hindsight and no agenda have pointed out in the years since, there wasn’t anything better to take the place of the old power brokers.

What leaders of the CHOP, and worse Democratic elected officials, are demonstrating in Seattle and Minneapolis is that the public will not be able to count on its liberal politicians to fulfill their lofty promises, no matter how good those promises might sound.

The current protests, like Occupy Wall Street before them, lack centralized leadership. Into this void, opportunists are again rising into the spotlight.

They are not helping the cause; they might not even be trying to.

But they are hurting it.