Systemic Racism and Criminal Justice at the Crossroads

What is the future of policing in America? 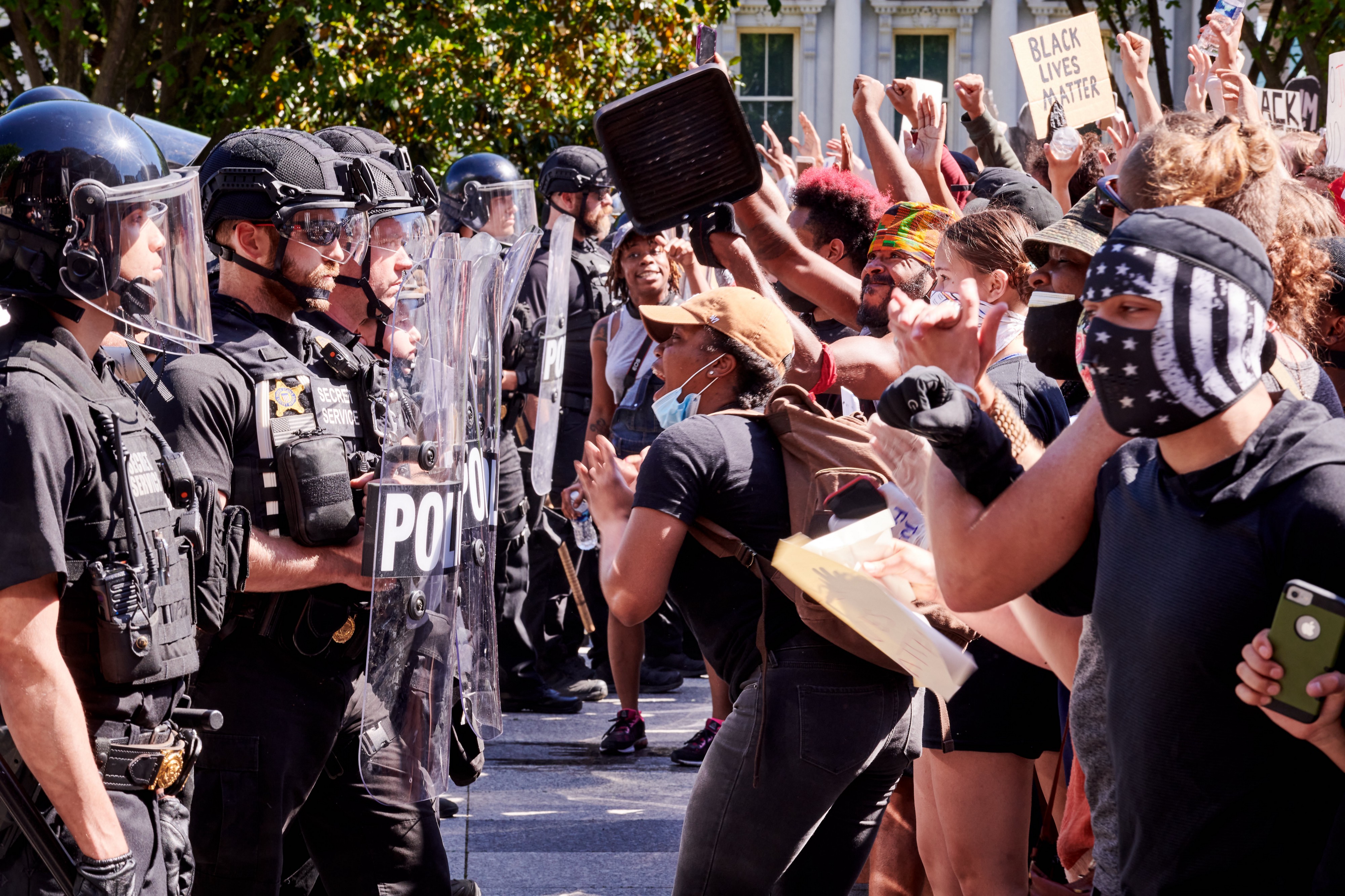 Protestors confront the Secret Service in front of the Old Executive Office Building on Pennsylvania Avenue. Protestors were there in a second day of DC protests against the police brutality in the death of George Floyd. May 30, 2020. (photo: Geoff Livingston)

In the wake of the brutal killing of George Floyd, millions of voices have been lifted in unison against racial injustice and police violence. Countless protests have erupted in the U.S. and around the world.

George Floyd died two-weeks ago after a Minneapolis police officer, Derek Chauvin, knelt on his neck for nine minutes as Floyd gasped, “I can’t breathe.”

In his final moments, Floyd could be heard begging for his life and crying out for his mother.

A video taken of the incident sparked instant, widespread outrage. Footage of the white police officer casually, almost nonchalantly, pressing his knee into a prone George Floyd’s neck in broad daylight until he died- in full view of bystanders openly filming the incident and calling urgently on an utterly unconcerned Chauvin to desist- was indeed very chilling.

In the days that followed Floyd’s death, U.S. President Donald Trump pledged an expedient investigation by federal law enforcement. It did little to quell the outrage which has since spread like wildfire on social media, spilling out into city streets.

Violent riots and peaceful protests have both taken center stage.

Massive protests have left sections of Minneapolis torched, with insurance companies estimating at least $500 million in damages. Many Minneapolis business have been completely destroyed; some will never be coming back.

Chicago’s Mayor Lori Lightfoot and other city leaders were heard on a recently leaked conference call decrying the destructive protests and the wave of violence which has lashed Chicago- a city which recently saw its highest number of homicides in a single day in over 60-years.

In the leaked recording, one Chicago alderperson can be heard weeping while another lambasts the mayor for letting entire wards burn.

“What will we have left?” an official can be heard asking, weakly, before the call devolved into profanity and recriminations.

The death of George Floyd at the hands of a Minnesota police officer was absolutely despicable, its aftermath lamentable. But sadly it is far from the first incident of its kind to demonstrate a similar and reckless police brutality.

In 2016, Tony Tampa called 911 in the parking lot of an adult video store, saying he was off his medication for schizophrenia and depression and needed help. Video evidence shows Timpa died after a police officer pinned him down with a knee on his back for nearly 14 minutes and ignored his cries of "you're gonna kill me!"

A county autopsy report ruled that Timpa died “as a result of sudden cardiac death due to the toxic effects of cocaine and physiologic stress associated with physical restraint.”

The officers remarked how he squirmed “like a roly poly,” and they did not check to see if Timpa was breathing or look for a pulse when he went unconscious. Instead, the officers continued to make jokes about Timpa, even saying “is he breathing?” at one point.

One officer can be heard on the recording saying “hope I didn’t kill him,” to a few laughs from his fellow officers.

Sgt. Kevin Mansell, Officer Danny Vasquez and Officer Dustin Dillard were indicted on misdemeanor deadly conduct charges, but they were dismissed by the Dallas County District Attorney’s office after three medical examiners concluded the officers’ conduct was not reckless.

The ranks of people killed by police have grown in the past few weeks to include two high-profile cases: EMT Breonna Taylor, who was killed in her own home by police officers executing a “no-knock” warrant and Ahmaud Arbery, who was shot by a retired law enforcement officer while out jogging.

It may seem as if there have been too many of these incidents to count, but some data analysts have been counting.

The phrase “black lives matter” should be a completely uncontroversial phrase, because all black lives do matter.

Members of the Black Lives Matter movement sometimes use this phrase to imply that there are people who disagree that black lives matter, including police officers, who are charged to protect and serve the community.

What do the numbers show?

The Washington Post has maintained a comprehensive database of every fatal
shooting in the United States by a police officer in the line of duty since Jan. 1, 2015. It is updated regularly as fatal shootings are reported and as facts emerge about individual cases.

A study done by Harvard explored racial differences in police use of force. In regards to non- lethal uses of force, the study found that black and hispanic people were over 50% more likely to experience a form of force, physical intimidation, or restraint in interactions with law enforcement.

On the most extreme uses of force however- officer-involved shootings- the study found no racial differences in either the raw data or when contextual factors are taken into account.

“Surprising New Evidence Shows Bias in Police Use of Force but Not in Shootings,” published in the New York Times in July of 2016, reported on the groundbreaking study and the finding that “black men and women are treated differently in the hands of law enforcement,” and are “more likely to be touched, handcuffed, pushed to the ground or pepper-sprayed by a police officer.”

“But when it comes to the most lethal form of force- police shootings- the study finds no racial bias.”

“It is the most surprising result of my career.” — concluded Roland G. Fryer, Jr., a Harvard Economics professor and author of the study.

The Black community is far from a homogenous bloc; certainly not everyone agrees on how best to move forward to address the challenges inherent in problems as longstanding and far-reaching as racism and criminal justice in America.

But with so many people asking hard questions, and listening unflinchingly to diverse opinions and answers, we are already moving in the right direction.