Should organizations in the U.S. that spread anti-Semitism and openly advocate for violence against Jews be tax-exempt? 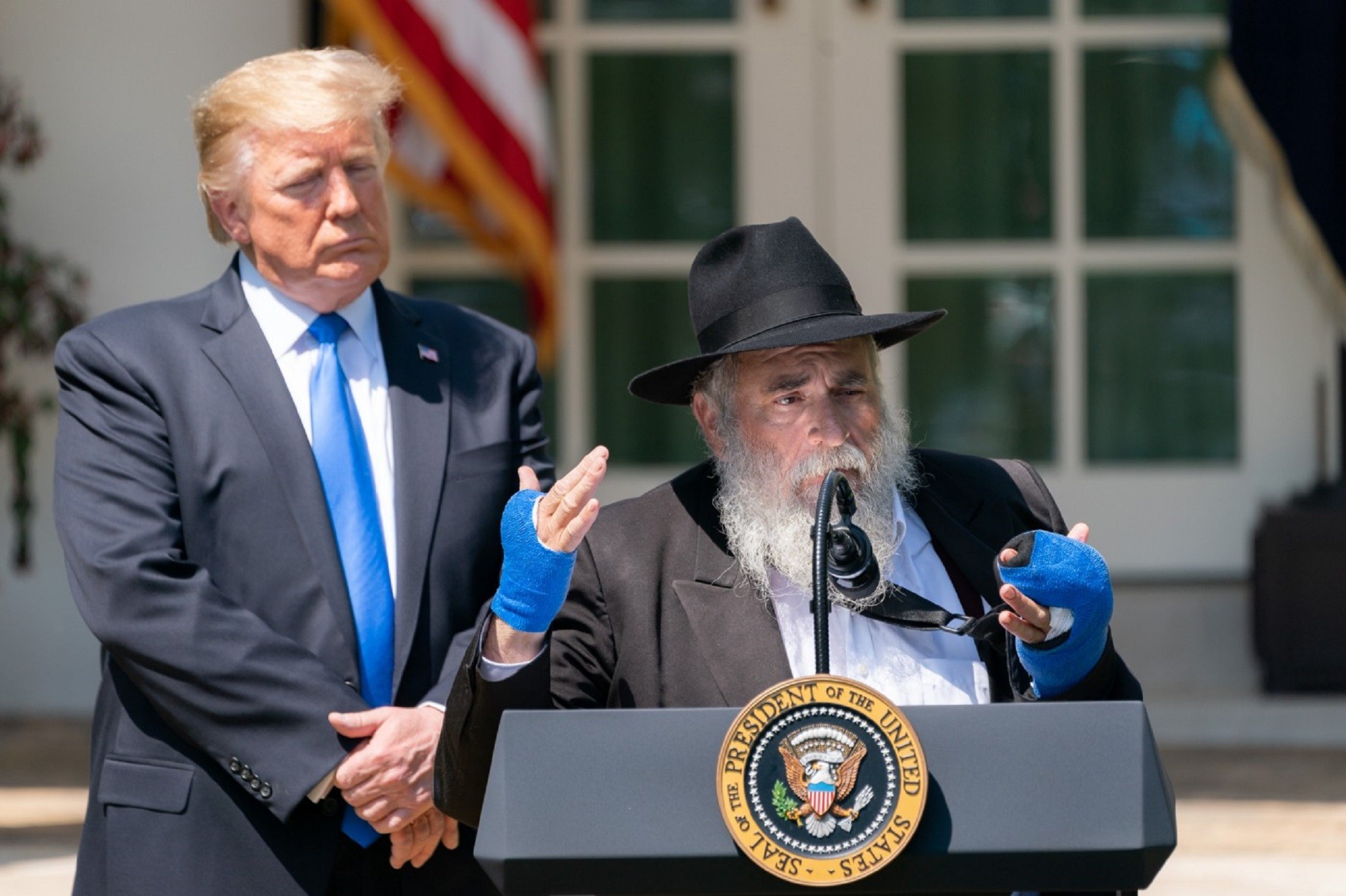 President Donald J. Trump listens as Rabbi Yisroel Goldstein of the Chabad of Poway, Calif., speaks at the National Day of Prayer Service Thursday, May 2, 2019, in the Rose Garden of the White House. Rabbi Goldstein was injured in a shooting at his synagog earlier this year. One of his congregants died shielding the Rabbi during the attack. (Official White House Photo by Tia Dufour)

When a controversial Imam known for making anti-Semitic comments on social media was recently asked by House Democrats to give the opening prayer on the floor of the House of Representatives, the backlash from the Jewish community was swift.

And surprised, though not shocked.

Even in light of a continuous stream of comments by House Members Rep. Ilhan Omar and Rep. Rashida Tlaib that many Jewish people in the U.S find anti-Semitic, historically revisionist, or just plain wrong, Imam Omar Suleiman struck a new low note of disbelief and sadness for American Jews.

In the aftermath, Jewish voters, the majority of whom are registered Democrats, are taking a new and harder look at a political party that seems to have left them behind.

As in, moved further to the left, where somehow, possibly in the name of religious tolerance of Islam, anti-Semitism has found a new safe haven. David Duke has called Rep. Ilhan Omar the “most important person in Congress’.

Where is all this anti-Semitism coming from? Who is spreading it?

One of the tenets of the New Socialist Democratic faith is supporting Palestine over Israel. In its purest form, the most doctrinal interpretation, it involves advocating for the one-state solution.

It should be noted that not even the Palestinian government goes that far; for the Palestinian authority a two-state solution is acceptable. Only the terror organization Hamas agrees that the only possible peaceful solution involves no more Jews in Israel.

The one-state solution aims to destroy the only Jewish country in the entire world. Why is that?

Israel is the only Democracy in the Middle East, though the Sudan may soon be joining the club, inshallah. Israel is also a key military ally and a profitable trading partner of the United States and has been for decades.

Far-left Democrats like Rep. Rashida Tlaib who advocate for the one-state solution do so knowing full well what would happen to Jews currently living in Israel.

Luckily for everyone, this is America. Tlaib, Omar and their ilk are allowed to believe whatever backward, wrong-headed thing they like about Israel and Jews. Though their comments often make it clear how little they truly know about the geopolitical situation and history of the region in question.

Like many Jewish people, I do not believe Ilhan Omar has any business on the Foreign Affairs Committee. I also hope voters in both their districts send a strong message in November of 2020. In the meantime, I hope they are learning from their more experienced colleagues in Congress. I hope their Jewish colleagues in particular will help correct some of their grosser misrepresentations about Jewish people.

That’s my opinion: I get to believe what I want, too.

Even Imam Omar Suleiman is allowed to believe whatever he likes. He is allowed to interpret his religious doctrine in any way he sees fit, and guide the souls that attend his services in accordance with his understanding of the faith. He is even allowed to think that Jews are an ultra-wealthy cabal of satanic devils that secretly control the whole world.

I would prefer he not be given the platform of the U.S. Congress, but that is just another one of my little opinions.

However, some radical Islamist clerics in the U.S. openly espouse anti-Semitism from their religious pulpits. They call for their followers to attack Jews, to find them wherever they are and persecute them. Violently.

This rhetoric can and does lead to violent anti-Semitic attacks against Jewish people and Jewish temples in the U.S.

Should these “religious” organization be tax-exempt if they make the U.S. far less safe for American Jews? Should American Jews pay taxes so that these organizations can openly advocate for and manipulate faithful followers to carry about violent acts against Jewish people?

“Oh, Allah, count them one by one and annihilate them [Jews] down to the very last one.” — Imam Ammar Shahin, Davis Islamic Center in Northern California. He also accused Jews of contaminating Muslim shrines with their ‘filth’. July, 2017

Prominent Imams in the U.S. have been repeatedly caught on tape sermonizing and waxing poetic about killing Jews, destroying Israel, and ridding the world of the scourge of Judaism forever.

“It’s outrageous they aren’t immediately removed and investigated for what may be solicitation [to commit a crime of violence].” — Veteran FBI Special Agent John Guandolo, who now runs a counterterrorism consulting firm

Removed and investigated would be great. But divesting the offending organizations from their tax-exempt status, conveying accurately the message that the Mosques where these radical Islamist Imams hold forth, not all Mosques, are hate groups and not legitimate religious organizations.

“Count them one by one, and kill them down to the very last one! Do not leave a single one on the face of the Earth.” — New Jersey Imam Aymen Elkasaby, who also invoked ‘martyrdom’ as a way to fight the Jews he called ‘apes and pigs.’ December 2017

Radical Islamist Imams in California, Houston and New Jersey preach the destruction of Jews. Yet there is no media outrage, no chorus of condemnation, no resolutions condemning anti-Semitism unilaterally. They haven’t even been fired.

To ignore these violent hate-mongers out of fear of insulting Islam IS insulting to Islam. It assumes that this type of radical, anti-Semitic, Islamist definition of the faith is the only one or even the most common. It isn’t.

Most Imams in the U.S. manage to lead their flocks according to the tenets of the peaceful faith of Islam without any trouble whatsoever, without a whisper of anti-Semitism or scandal. Most Mosques are peaceful houses of faith that help people. They contribute to their communities and to society.

The Imams who espouse violent anti-Semitic attacks against Jews should not have the same status, rights and tax privileges of the Imams who don’t. To continue to do otherwise is an injustice to Jewish people, to Muslims and peace-loving people of every faith and no faith at all.

This is America. You can believe whatever hateful thing you want, but you can’t advocate for violence. And you certainly shouldn’t be compensated by the government for doing so.