Trump has a great deal to crow about while Democrats are busy painting themselves into a far-left corner as the greater of two evils. 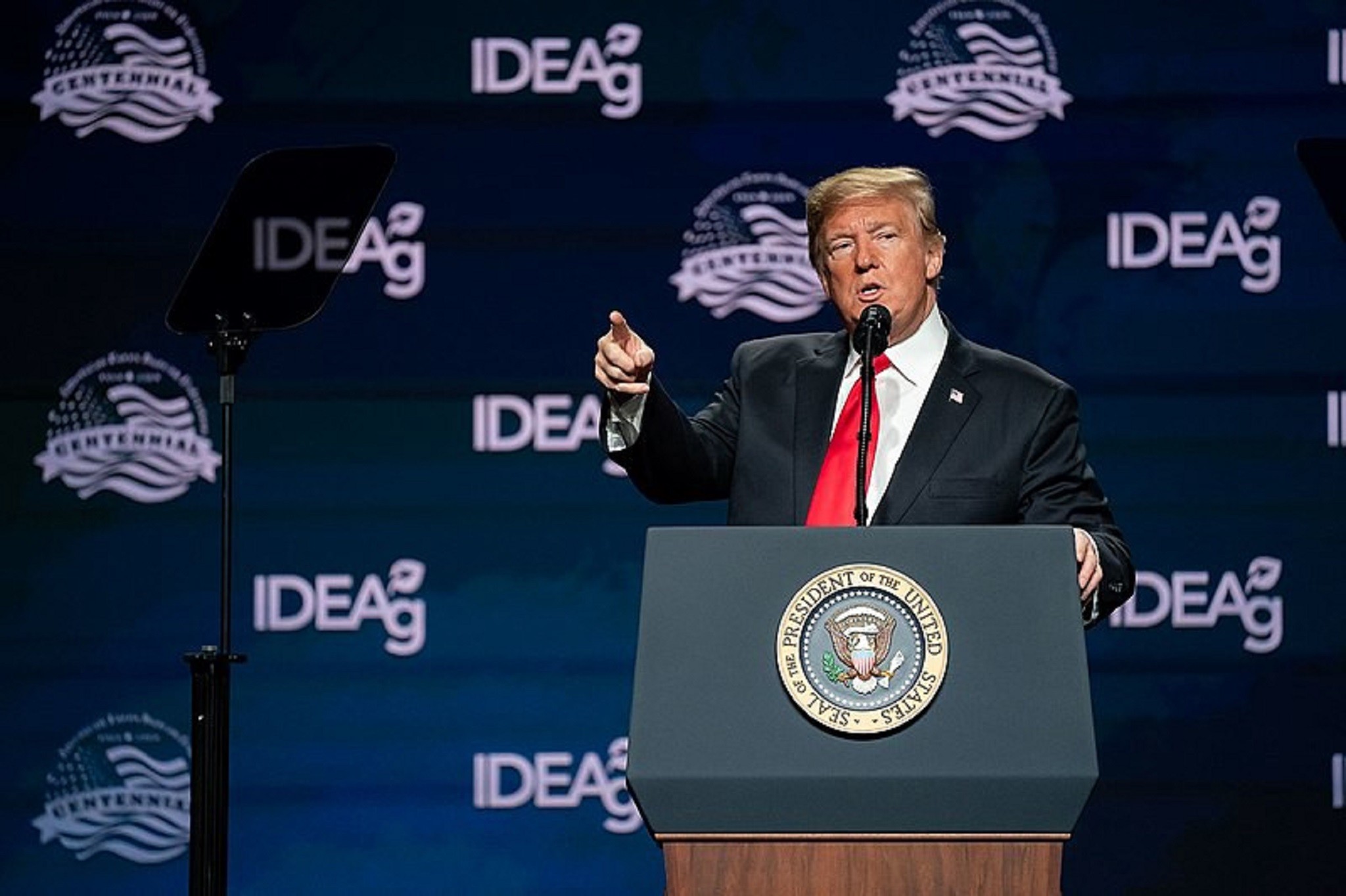 President Donald Trump is set to give the State of the Union Address tomorrow night. What should a sharply divided U.S. be expecting?

Expect a fair amount of crowing, the Trump Administration has earned it.

U.S. jobless claims have officially dropped to the lowest in 50 years. Payrolls surged by 304,000 last month, smashing original estimates to pieces in spite of the extended government shutdown.

With 254-pounds of fentanyl seized at the border last week, perhaps the President will even use the moment to (finally) remind the voting public that border security and illegal immigration are two separate issues.

Border security involves primarily keeping drugs, gangs and criminal cartels out of the U.S. (One reason they are so ill-prepared to deal with the sudden influx of families and unaccompanied minor children.)

“I Told You So Sean Penn”

Trump’s early support for Venezuelan opposition President Juan Guaidó is paying off, as France and Germany join more and more countries backing the change in leadership as legitimate.

Even CNN had to admit that the people of Venezuela are calling, loudly and desperately, for the ousting of Maduro.

In response to Guaido’s assurances of pardons for members of military, a general has broken rank to encourage other soldiers, the vast majority of which are facing just as many food shortages as other Venezuelans, to join him in opposing Maduro. Venezuelan General urges military to disavow Maduro.

Though it was called a “U.S. backed coup,” by congresswoman Ilhan Omar, Democrats criticizing Trump for his stance in Venezuela are only losing ground by the day.

Liberal darling and Chavez heir apparent dictator Maduro, after repeated failed attempts to export massive amounts of Venezuelan gold in what can only be seen as a desperate sacking, is appealing this week to the Pope and claiming to be doing the work of God.

Expect a fair amount of kicking Democrats while they are down; Trump just can’t seem to help himself.

Madeline Albright inadvertently summed him up best when she accused Trump of “playing a strong hand poorly,” this week, though she was referring to the U.S.-Russian relationship at the time.

Tomorrow, Trump will play a strong hand poorly by rubbing it in, forgetting, perhaps, that he will have to face these particular players again and again.

Although, to be fair, Democrats certainly have been giving him a great deal to carnival bark about in the past weeks.

Panic at the DNC

Whatever happens tomorrow night, whatever Trump says or doesn’t say, the panic of the left seems unlikely to abate anytime soon. If anything, rage on the left seems to be building, even when the foundation proves to be nothing but air.

In a constant state of knee-jerking reaction to the perceived evils of the Trump Presidency, the Democratic party seems to be skewing hard left, abandoning older, more conservative Democrat voters apparently in hopes that the Democratic Party can survive by appealing more to young voters and immigrants.

“Democrats have gone off the rails,” according to the Washington Times. The Democrats Lose Their Minds, describes a series of moves that have every Democrat to the right of Jane Fonda recoiling in horror.

So much horror, in fact, that billionaire and erstwhile liberal Democrat mega-donor Howard Schultz is exploring a bid to run for President in 2020.

“Both parties are consistently not doing what’s necessary on behalf of the American people and are engaged, every single day, in revenge politics.” — Howard Schultz, 60 Minutes

His objections to Trump are understandable, but what have Democrats done that could possibly drive away such a decent, hardworking, life-long Democrat and frequent Democratic campaign donor who would otherwise be using his vast resources to help the Democratic candidates deliver the U.S. from the scourge of the Trump presidency?

The answer, in a word, is an ugly solution with a pretty-sounding name: Socialism.

Some voters are waking to the dawning horror that, even if they hate Trump, the cure Democrats are peddling sounds much worse than the disease.

Electing a Democrat to supplant Donald Trump in 2020 may not mean what it meant four years ago. Elect Democrats in 2020 and you might get less than you bargained for.

If You Like Your Healthcare, You Can’t Keep It

Kamala Harris wants to give the government full control over U.S. healthcare, and isn’t even bothering with false promises that if people like their health care, they can keep it.

Democrats: “Give the government full control over your healthcare.”

Also Democrats: “The government is shutting down indefinitely.”

By this reasoning, federal workers not receiving paychecks should have been grateful they weren’t lying open on an operating table.

Harris should perhaps also consider that, while some in America may lack it, most Americans have health insurance and, according to a Kaiser study, 71% of them are happy with it.

Democrats have become the party of illegal immigration, with Speaker Pelosi calling a wall “an immorality.”

Hollow words for some voters, considering that Pelosi, and her fellow Democrats, have congressionally approved the construction of barriers under the previous three presidents, including over 130 miles under Obama.

The Rich: It’s What’s for Dinner

Top Democrats are currently unveiling their plans to eat the rich. Taxing the rich becomes hot topic of debate for 2020 hopefuls.

According to Democrats, billionaires are immoral, and need to be taxed more, much more: At a rate of 70%-90%. That billionaires pay more in taxes in a single year than most people will earn in their entire lives, and that billionaires contribute more to the GDP than everyone clamoring to take their money makes combined, seems to escape their notice.

No mention either of the tendency of tax rates above a certain threshold to push the wealthy out of one country and to one more appreciative of their contributions.

“We need a healthy economy and we shouldn’t be embarrassed about our system. If you want to look at a system that’s not capitalistic, just take a look at what was once one of the wealthiest countries in the world and now people are starving to death: it’s called Venezuela.” — billionaire and former New York City Mayor Michael Bloomberg

Which the majority of Americans do not support, is now up for debate apparently.

It is no coincidence that the same week these comments were made public:

The governor in question is now facing pressure to resign after old racist yearbook photos of him surfaced. And not by accident.

The tip about the racist photo in Gov. Ralph Northam’s yearbook reportedly came from an ex-classmate angry about his abortion comments.

The problem for extremely-liberal Democrats insulated in echo chambers of the like-minded, is that Most Americans don’t want a standing ovation for abortions until birth.

What Republicans Won’t Do, Democrats Can’t Do

Democrats are blowing it. Again.

People who voted Democrat to send Trump a message in 2018’s midterm elections may be regretting the interpretation of that message by Democrat leadership.

The message was not: “We want open borders, post-birth abortions, government-controlled health care and a 70%-90% tax on the wealthiest that will drive them right out of the U.S.”

The message was: “We want better leadership than Donald Trump.”

Disarray and a too-radical push left is what voter’s got instead, with Democrats busily rebranding themselves as the greater of two evils.