How the conservative Middle Eastern heavyweight is hedging its bets on a Biden administration. 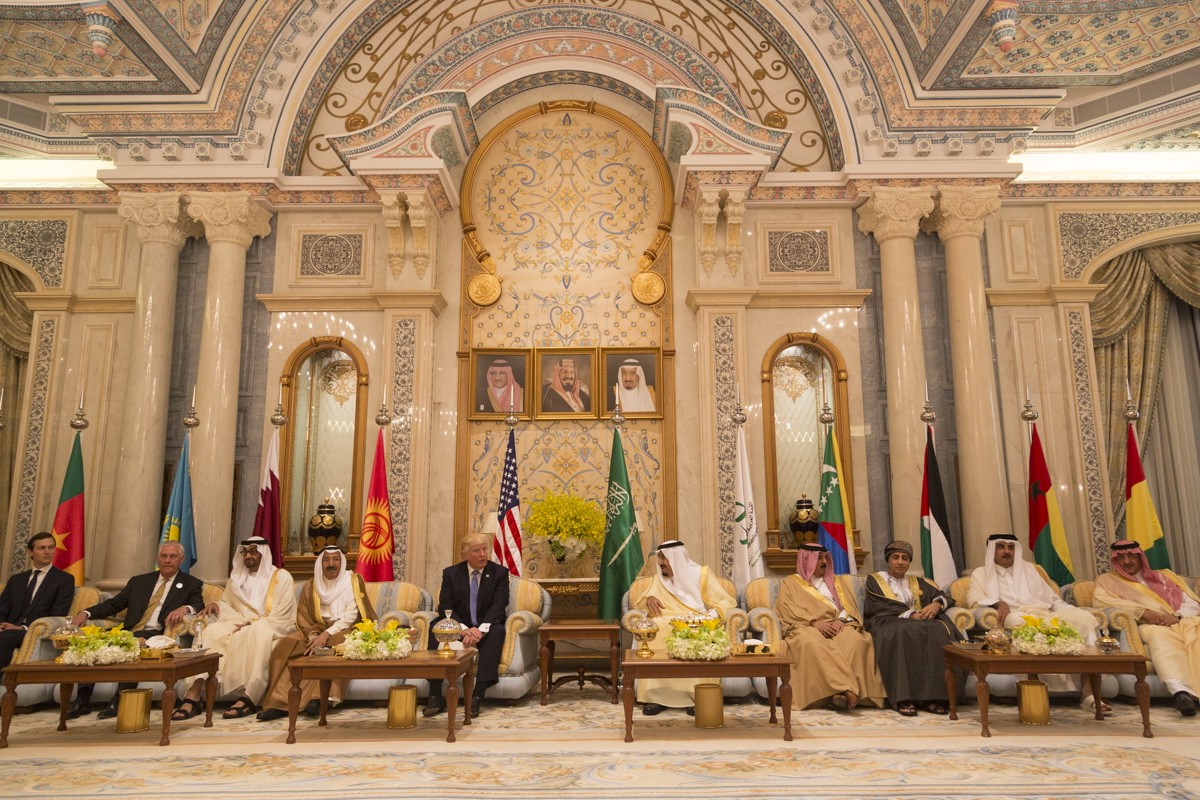 President Donald Trump and King Salman bin Abdulaziz Al Saud of Saudi Arabia attend the meeting of the Leaders of the Cooperation Council for the Arab States of the Gulf Countries, Sunday, May 21, 2017, at the King Abdulaziz Conference Center in Riyadh, Saudi Arabia. (Official White House Photo by Shealah Craighead)

“When can we stop thinking about Trump every minute?” laments the New York Times today. The New York Times can rest easy; the world may soon have far more important, and dire, things to occupy the news-cycle than the Twitter antics of Donald Trump.

The Middle East is changing rapidly. Though it is an easy fact to forget, the Gulf War in 1990 was the first time the United States became militarily involved in a war in the Middle East. Desert Storm and Desert Shield were the first U.S. incursions into the diverse and troubled region, but not the last.

U.S. military forces have been fighting in the Middle East ever since. Three subsequent presidential administrations lied to the American people about losses in Afghanistan. What the Washington Post found (when at last they cared enough to look) in the Afghanistan Papers heaps shame upon every fawning news article about Barack Obama’s jump shot.

Bush, Obama, and Trump can hardly be blamed: No one ever wins in Afghanistan; certainly not the Afghani people, and least of all the foreign powers who have tried, and failed, to conquer the rugged, unforgiving terrain.

Worse, all the time world powers like Russian and the U.S. have spent in Afghanistan, together with their advanced equipment, has resulted in some of that war-making equipment landing in the hands of groups like ISIS.

So much of what the U.S. has tried to do in the Middle East has made things worse, rather than better. Perhaps the most well-meaning of all, former-President Barack Obama, did the most damage. Donald Trump, to his credit and though he has had little cooperation or recognition in so doing, has at least attempted to extricate the U.S. from endless wars in Afghanistan.

Obama is the only Nobel Peace Prize receiving world leader who also, ironically, later came to be known as the war president. Worse, Obama’s disastrous policy of Iran-appeasement, and the Obama administration’s generous cash gifts to Iran, caused a chain reaction of Iran-sponsored, well-funded, and extremely deadly terrorist attacks all across the region.

Not in the U.S., of course, which is why we only got “news” stories about Barack Obama’s picks for March Madness. But in the Middle East, so much violence has been unleashed via Iran in the past decade, Iran’s neighbors are now allying themselves with their sworn enemy: Israel.

Meanwhile, and for the first time in living memory, the U.S. is no longer dependent on foreign oil. Now, whether or not this relatively new development will survive the policies of a Biden administration is another matter. But for the time being, and for the first time a long time, the U.S. isn’t as invested in the security of the Middle East from an economic standpoint.

Israel, however, and for the time being pending a Biden administration, is still a close ally of the United States. Closer perhaps, during the Trump administration, which proved particularly friendly to the world’s only Jewish nation.

The fact that powerful, wealthy Saudi Arabia, which is ideologically nearly identical to Iran, feels so threatened by the nuclear and regional aspirations of Iran as to ally itself with Israel is perhaps the most telling development of all. And a most damning condemnation of the Obama administration’s Middle Eastern foreign policy.

None of Israel’s recent diplomatic successes in the Middle East could have been possible without the tacit approval of the Saudi Royal Kingdom. The Saudi Arabian government seems to be doing all it can to shore up the progress the region has made over the past four years.

In a move that was pure self-preservation, Saudi Arabia withheld their official acceptance of the Jewish State of Israel from the Trump administration.

Though it would have undoubtably been a tremendous coup for Donald Trump, by withholding it the Saudi Royal Family gave themselves an Ace in the hole- should they have to deal with a Biden administration.

“Stay the course, get a big diplomatic win and preserve peace in the region; go back to Iran appeasement, and Saudi Arabia and Israel no longer need U.S. cooperation or leadership in brokering a deal together.”

Behind the scenes, the Trump administration also seems to be doing all it can to shore up progress in the region. According to leaks, a secret meeting between Saudi Arabia, Israel, and the U.S., including U.S. Secretary of State Mike Pompeo, recently took place. Saudi Arabia has denied the reports; Israel has not.

Israel is, perhaps, taking the most drastic steps to shore up progress and ensure Iran will not be developing a nuclear weapon, even should the Iranian government be festooned with cash by an overly-credulous Biden administration in the coming years. It makes sense: Israel has the most to lose.

Last week, Israeli forces are said to have taken out Iran’s chief nuclear scientist in a sophisticated assassination. It is an interesting move, and one that doesn’t smack of confidence in a Joe Biden administration.

Was it desperation or calculation?

Israel may indeed be desperate to prevent Iran from getting the bomb; as is the rest of the Middle East and the world. Israel, however, has long had the capability to assassinate targets in Iran. What has kept the small country from direct martial action, like assassination, has been the larger regional threat posed by its neighbors. Had Israel attacked Iran in a similar manner 10 years ago, other Middle Eastern countries would have defended Iran.

Now, however, because of all the terrorism Iran sponsored against its neighbors, Israel obviously has no such fears. In fact, it may well be that Israel acted with the blessing of Saudi Arabia. Indeed, it is difficult to imagine Israeli Prime Minister Benjamin Netanyahu risking such a move without it.

Why would he risk these extremely hard-won, tenuous new diplomatic relationships to eliminate a threat Israel could have eliminated anytime over the past five years or more? Removing one Iranian nuclear scientist is short game; the Iranians can always get more. Close diplomatic ties with its Middle Eastern neighbors is Israel’s long game, and Netanyahu is playing it very well.

In the Saudi Crown Prince, Netanyahu may have found an even more important ally than Donald Trump. Crown Prince Mohammed bin Salman is ambitious. His plans for a 10,000 square mile mega-city situated near the borders of Saudi Arabia, Jordan, Egypt and Israel, indicate an interest in long-term relationships and profitable partnerships with countries who want to take advantage of the many opportunities afforded by the global marketplace.

At least for now, the leading state sponsor of terror in the Middle East is being outmaneuvered at every turn by an unlikely coalition of its Muslim-majority neighbors, Saudi Arabia, the Donald Trump Administration, and Israel.