Medium Facebook Twitter LinkedIn RSS YouTube Instagram
LATEST
The Dream of Chinese Democracy
Is There a Coup Happening in China?
Outcry After Young Woman Killed in Custody of Iran’s “Morality Police”
Public Health or Profits?
If a Pandemic Ends and No One Hears, Does It Make a Sound?

Want to see a stampede to the political party promising law and order? Historically, the world over, violence makes voters more conservative. 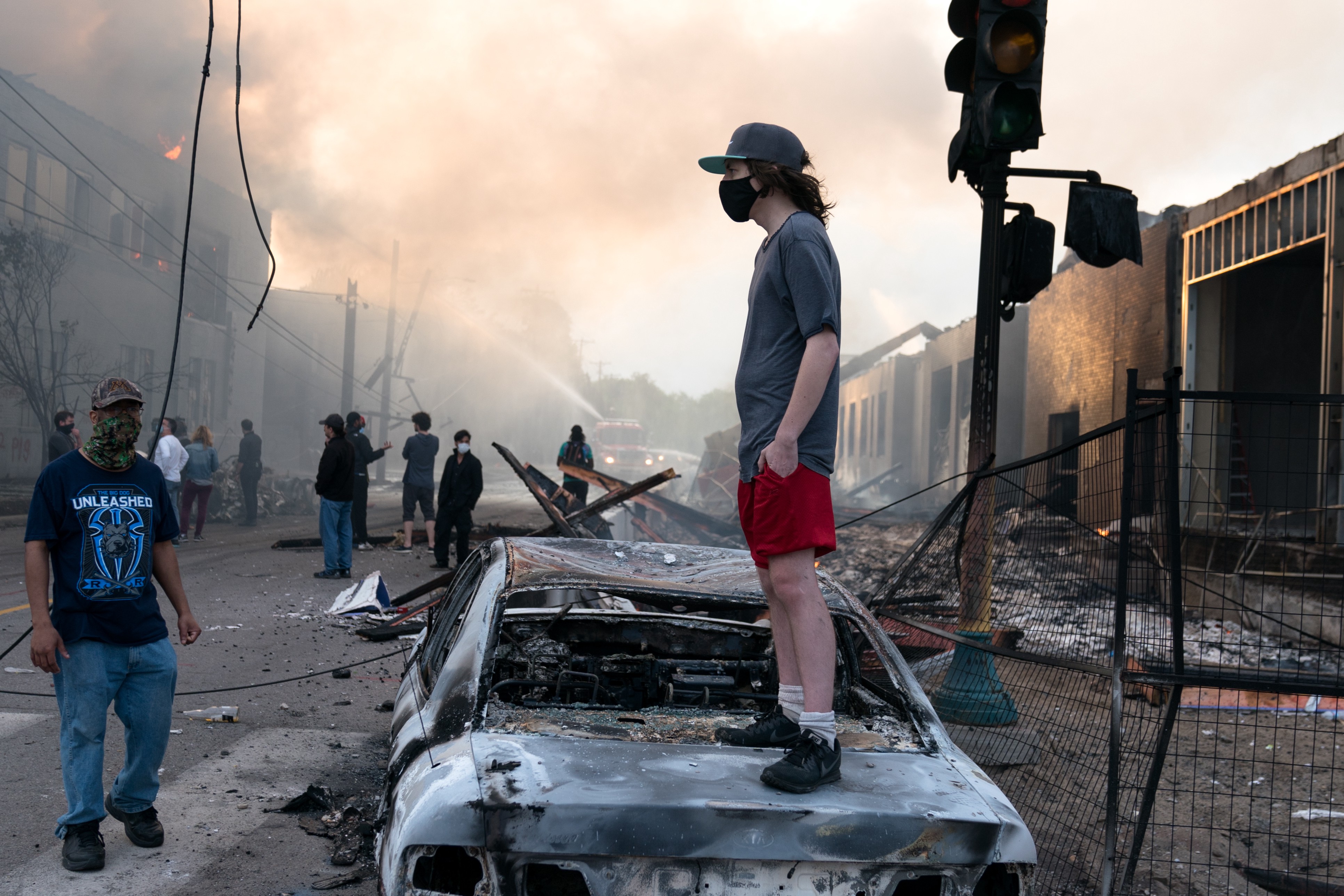 A man stands on a burned out car on Thursday morning as fires burn behind him in the Lake St area of Minneapolis, Minnesota. May 28, 2020. (photo: Lorie Shaull)

“Good!” — U.S. President Richard Nixon, on the news that violence was expected to erupt during college campus demonstrations in 1969.

The tragedy of the George Floyd case is something that will live in American infamy, probably forever. The terrifying image of George Floyd on the ground, the policeman kneeling on Floyd’s neck, the videos of him begging for his life, will haunt us in the years to come.

Whatever the trial of the police officers involved reveals, whatever justice the defendants receive, it will not restore life to George Floyd. It will not restore George Floyd to his family or his young daughter. Nor will it restore the lives of the thousands of other people who have tragically been killed in incidents like these.

The violent protests, still ongoing, which have followed the killing of George Floyd will also live on in people’s minds in the years to come.

In the days after four LA police officers who were filmed brutally beating Los Angeleno Rodney King were acquitted, when violent protests raged through LA and in other cities, the U.S. had an advantage we don’t have today.

Unlike George Floyd, King survived his encounter with police; and as the protests turned into riots in Los Angeles, Rodney King publicly begged for calm and condemned the violence.

George Floyd, though his loved ones insist he would be heartbroken and devastated by the destruction being carried out in his name, cannot.

Prominent Republicans, including Donald Trump, have expressed their sympathy and regret over Floyd’s death. President Trump called the family of George Floyd personally to express his condolences and commitment to seeing justice done in the case.

Prominent Democrats have also expressed their outrage and sympathy, of course. However, Democrats have largely taken a different tone with regards to the violent protests.

From bailing out protestors arrested for assault or damage to public or private property to calling the violent agitators amid the peaceful protestors “freedom fighters”, prominent Democrats have done little to stop the spread of violent protests or denounce violent offenders.

Indeed, some have seemed to encourage it. In so doing, these Democrats must believe that violent protests will reflect badly on Donald Trump. They must believe voters will blame Trump for George Floyd’s death and the riots which have followed. Wrong.

Decades of research, recent research, a meta analysis of the data from 22 countries around the world; the jury is in: Violence makes voters absolutely beeline for the political party offering to restore law and order.

And what did Donald Trump tweet out just yesterday: “LAW AND ORDER!”

After, the Rodney King riots in the 1990s, the U.S. got a sweep of new Republicans in office, cumulating with two terms of George W. Bush. After riots in the 1960’s, the same thing happened.

“The 1960s saw two overlapping waves of protest: nonviolent civil-rights demonstrations and urban rioting. The 1960’s also saw the Republican Party crack open the New Deal coalition by, among other things, appealing to public concerns about law and order.”

If prominent Democrats like former Vice President Joe Biden want to get elected in November; if liberal voters want to see the end of the Donald Trump presidency, violence is not the answer.

Violence will only give us four more years of the Trump administration.

On the other hand, the Trump administration and the Republican-majority Senate has recently proven their willingness to enact meaningful criminal justice reform legislation. In doing, they have also signaled their support for further legislation by openly calling it a “first step.”

The FIRST STEP Act was a good first step: The murder of George Floyd has shown legislators of both parties how far there is yet to go. And how important it is that we get there sooner rather than later. We cannot wait until after the election in November when Democrats may or may not emerge victorious.

The problems that plague the American criminal justice system did not start on Donald Trump’s watch. They will not automatically end even if he is removed in November.

Reforms can’t wait another day. Somewhere out there, the next George Floyd is even now unsuspecting, in terrible danger; the clock is ticking. A lasting legacy of criminal justice reform in America will not bring George Floyd back to life.

But it might give his family, and our nation, some small comfort in our grief.