An Ahmadi woman charged with blasphemy faces an uncertain future. 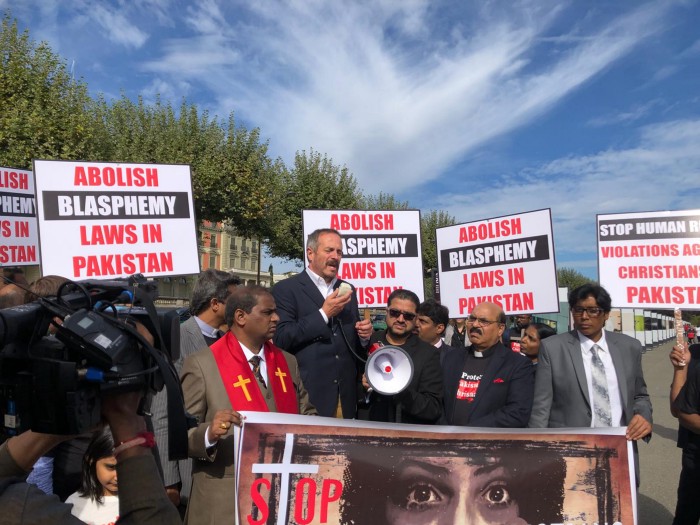 International and U.S. human rights groups have begun an urgent campaign on behalf of a woman recently jailed in Pakistan on blasphemy charges.

55-year old Ramazan Bibi, a member of a minority religious community of Ahmadis, was arrested and imprisoned in April under a Pakistani anti-blasphemy law which carries the death penalty.

Under the controversial law, anyone found guilty of the crime of blasphemy can be sentenced to death. Pakistan has yet to execute someone for blasphemy, but the law, and the charge when levied against a minority religious community member, has already cost lives in Pakistan.

Mob violence has frequently accompanied accusations of blasphemy, as have assassinations relating to other cases of people charged under the law.

During the Asia Bibi case, the last high-profile religious blasphemy case in Pakistan, both Salman Taseer, then governor of the Punjab, and Minorities Minister Shahbaz Bhatti were assassinated in 2011 for advocacy on Bibi’s behalf.

Attorneys who represent clients accused of blasphemy have also been killed or threatened into abandoning these controversial cases.

One problem to which human rights advocate often point, is how easily these laws can be used to settle personal scores and how quickly a baseless accusation can spread.

Asia Bibi, a Christian farm worker sentenced to death almost a decade ago for blasphemy, was accused of blasphemy after a minor workplace dispute over the sharing of community drinking utensils.

After eight years on death row, Asia Bibi was acquitted and her death sentence was overturned in October 2018. Widespread violence, incited by extremists, broke out across Pakistan at the verdict announcement.

Canada agreed to grant Asia Bibi and her family political asylum following Bibi’s October 2018 acquittal. Although she was acquitted, Islamist militant groups in Pakistan, including the powerful and influential Tehreek-e-Labaik Pakistan (TLP) have threatened to carry out the death sentence anyway.

Since the release of Asia Bibi, the TLP has called for a coup within the Pakistani armed services and vowed to assassinate the federal judges responsible for Bibi’s acquittal.

Nor is Asia Bibi’s cell empty; it was soon occupied by another middle-aged woman serving a sentence for blasphemy, Shagufta Masih. She, along with her disabled husband, were convicted of blasphemy and sentenced to hang. Now, Ramazan Bibi faces the same fate.

Human rights organizations take particular exception to laws persecuting people for religious crimes like blasphemy, but Pakistan’s blasphemy laws are particularly troubling in that they are so vague. Any act deemed to ‘outrage religious feelings’ is punishable by 10-years in prison.

Religious minorities are particularly vulnerable to the charge.

The Ahmadi, a little-known off-shoot of Islam, was founded in the 19th century by Mirza Ghulam Ahmad. Followers of the faith believe he was the messiah promised by the Prophet Muhammad. Ahmadis, however, have been declared non-Muslims by the Pakistani government. As such, many of the religious practices of Ahmadis, including the traditional religious practices they share with mainstream Muslims, are considered blasphemous.

In addition to questions about what will become of people who continue to run afoul of blasphemy laws, in Pakistan and elsewhere, there are also new questions over the role big American tech companies will play in the controversy.

What blasphemy laws that carry a death sentence mean in the modern age, is that if you want to condemn someone to death, there has already been an app for that.

In Indonesia, which has similar blasphemy laws punishable by death, Google came under fire not long ago for platforming an app which made it easier to turn in friends, neighbors and coworkers for poorly defined religious crimes.

A 14-minute animated Pakistani film, produced in 2020, touched upon the dangers of blasphemy laws coupled with the power of social media and the dehumanizing aspects of attacking from behind a computer screen.

“Swipe” tells the fictional story of a boy who grows obsessed with a smartphone app that lets people vote on whether or not someone deserves to die for blasphemy. In the film, if a person gets 10,000 votes, they are killed. Driven to score points on the app, and for accusations ranging from wearing too much perfume to failing to forward a religious message on social media, the boy accuses his own father of blasphemy.

Charges of blasphemy stemming from online interactions are increasingly common.

“It’s happening almost every day,” Hassan Baloch, from the anti-hate speech group Bytes-4-All, said in an interview with Reuters.

“What begins online is being translated offline, often in violent and dangerous ways.”