Putin Challenges Biden to a Debate

President Biden has declined the trap. 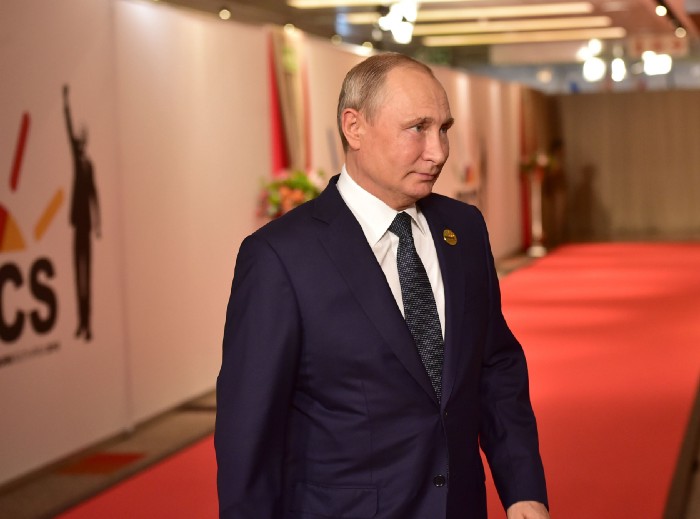 President Biden said Putin “will pay a price” for campaigns to influence the 2020 election, in an interview that aired Wednesday on ABC’s “Good Morning America.”

“We had a long talk, he and I, and relatively well,” Biden said. “And the conversation started — ‘I know you and you know me. If I establish this occurred, be prepared.”

Biden’s remarks were made the same day the Office of the Director of National Intelligence released an unclassified assessment of foreign influence operations targeting the U.S. election. When ABCs Host George Stephanopoulos asked Biden if he thought Putin was “a killer,” the President responded, “Mhmm. I do.”

Hours after Biden’s remarks, Putin recalled his ambassador to the U.S. for “consultations.” When asked about Biden’s comments during a video call Thursday aired on Russian state television, Putin said he wished Biden good health but said that Biden’s comments reflected America’s own troubled past.

“I would tell him: ‘Be well,’” Putin said. “I wish him health, and I say that without any irony or joking.”

“In the history of every people, every state, there are a lot of hard, dramatic and bloody events. But when we evaluate other people or even other governments, we always look as if into the mirror. We always see ourselves in it,” Putin continued.

“I remember when I was young and I got into fights with my friends, we always used to say ‘whoever calls names is called that himself,’” he added. “And that’s not just a children’s joke. The meaning is quite deep psychologically. We always see our own qualities in another person and think that he/she is like ourselves. And coming from that, evaluate his/her actions and evaluate him/her overall.”

Putin pointed to episodes in U.S. history including slavery, the U.S. government’s treatment of Native Americans, and the two atom bombs dropped on Japan during World War II.

Putin said Russia would still cooperate with the U.S. where it serves Moscow’s interests and later proposed to hold an online live discussion with U.S. President Joe Biden.

“I’ve just thought of this now,” Putin told a Russian state television reporter. “I want to propose to President Biden to continue our discussion, but on the condition that we do it basically live, as it’s called. Without any delays and directly in an open, direct discussion. It seems to me that would be interesting for the people of Russia and for the people of the United States.”

“I don’t want to put this off for long. I want to go the taiga this weekend to relax a little,” Putin added. “So we could do it tomorrow or Monday. We are ready at any time convenient for the American side.”

The White House rejected the Russian leader’s invite to hold a public conversation, saying the U.S. President is “quite busy.” After more than 50 days in office, President Biden has not yet held a press conference with the U.S. press corps, the longest period a new president has gone in the last century.

At the White House on Thursday, Press Secretary Jen Psaki was asked if President Biden regretted his characterization of Mr. Putin, to which Psaki responded: “Nope. The president gave a direct answer to a direct question.”

“President Biden has known President Putin for a long time,” Psaki added. “They’ve both been on the global stage for a long time, worked through many iterations of a relationship between the United States and Russia. And he believes we can continue to do that.”

Putin’s remarks were made after the Kremlin said Biden’s comments suggested he “definitely does not want to improve relations” between the two countries.

“I won’t be wordy in reaction to this,” Kremlin spokesman Dmitry Peskov told reporters. “I will only say that these are very bad statements by the U.S. president.”

The Kremlin says the purpose of Putin’s offer to hold a conversation between the two heads of state live was to salvage the U.S.-Russia relationship.

“It makes sense to have a talk to maintain Russia-U.S. relations instead of trading barbs,” confirmed Peskov. “Since Biden’s words were unprecedented, unprecedented formats can’t be excluded,” he said. “President Putin proposed to discuss the situation openly because it would be interesting for the people of both countries.”

The request was an odd one President Biden was right to refuse. The Putin administration isn’t well known for transparency, though Putin did hold part of a conversation with the French President live recently. The Biden Administration’s promise to be the most transparent in history notwithstanding, the delicate matter of the strained relationship between the two former Cold War rivals is probably best left to proper diplomatic channels, far from the public eye.