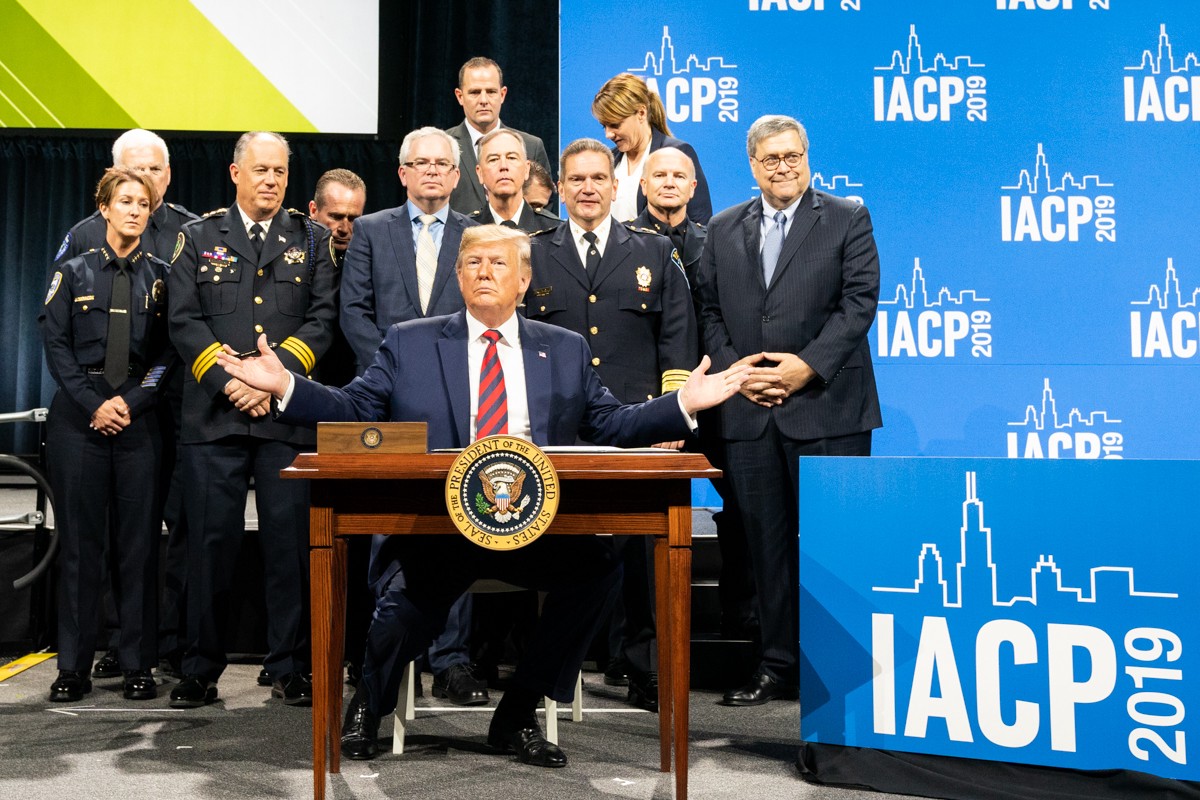 President Donald Trump and his political allies have repeatedly claimed that if Democratic presidential nominee Joseph Biden is elected as president, Biden will defund the police. Former Vice President Joe Biden has repeatedly insisted he does not support defunding the police.

In an interview with ABC News in August, Biden said “I not only don’t want to defund the police, I’m the one calling for $300 million more for local police, for community policing.”

“I also think we should add social workers and psychologists to help police on 911 calls. The only person calling to defund the police is Donald Trump. Look at his budget. He calls for cutting police funding for local — state and local help by $400 million. Once again, he’s pathological.”

Biden seems to be referring to the Trump Administration’s decision to cut funding from a community policing initiative, Community Oriented Policing Services, that dates back to the term of President Bill Clinton.

Trump’s campaign responded with a critique of Biden’s record as Vice President.

“Joe Biden doesn’t have a leg to stand on regarding police funding,” Trump campaign communications director Tim Murtaugh said in a statement to ABC News.

“It is an objective fact that federal funding for state and local law enforcement has risen under President Trump, while it fell dramatically while Joe Biden was vice president. They only want to talk about one program — COPS — which also fell while he was VP after they made a 2008 campaign promise to fully fund it,” Murtaugh said.

In an interview with Biden in July, activist Ady Barkan discussed groups that propose cutting back on police roles and recommend redirecting funds to “social services, mental health counseling and affordable housing.” Biden replied that he had made similar proposals and then elaborated on those reforms.

Barkan then asks, “So, we agree that we can redirect some of the funding?”

Despite Biden’s rejection of the “defund the police” movement, Trump and his campaign have pointed to Biden’s interview with Barkan in July as evidence that Biden does plan to move funds away from police.

“When asked if he supports cutting police funding, Joe Biden replied, ‘yes, absolutely,’” Trump said in his nomination acceptance speech at the Republican National Convention. “Make no mistake, if you give power to Joe Biden, the radical left will defund police departments all across America. They will pass federal legislation to reduce law enforcement nationwide. They will make every city look like Democrat-run Portland, Oregon.”

Biden twice tells Barkan that redirecting funds toward social and mental health workers is “not the same as getting rid of or defunding all the police.” However, many of Biden’s supporters and opponents have argued that defunding the police accomplishes the same goal as “redirecting” funding towards other government agencies funded by the local municipality.

Trump has made law and order and support for the police a main focus of his reelection campaign amid protests and riots nationwide over police brutality and racial injustice.

In light of recent events, law enforcement agencies and unions across the nation have begun to endorse President Trump for reelection in 2020. Biden has claimed that his support for the police has not wavered, but has their support for him?

Joe Biden has been endorsed for president by over 175 current and former law enforcement officers and officials, according to a report by Fox News.

The list includes former U.S. attorneys, former state attorneys general and dozens of former police chiefs and sheriffs. Some prominent officials included in the list are Janet Napolitano, the former Obama administration secretary of Homeland Security who served as attorney general of Arizona, and Mayor of Seattle Jenny Durkan, a former US attorney who has been heavily criticized for her response to the autonomous zone ‘Chaz,’ also known as Free Capitol Hill, the Capitol Hill Occupied Protest, or the Capitol Hill Organized Protest.

In addition, Trump received the “full and enthusiastic support” of the Fraternal Order of Police (FOP), the nation’s largest police union that represents more than 355,000 members.

“Public safety will undoubtedly be a main focus for voters in this year’s election,” FOP President Patrick Yoes said in a statement. “Look at what the national discourse has focused on for the last six months. President Trump has shown time after time that he supports our law enforcement officers and understands the issues our members face every day.”

“He’s been quiet,” Calhoun said. “And he’s from this state. We expected him to reach out to us.”

Trump responded to the endorsement from Delaware’s FOP endorsement and said “I’m honored.”

“I don’t see Biden anywhere but Delaware, and I like Delaware, too. To have the law enforcement in Delaware give their endorsement to me is really a great honor. It just shows you how pathetic the Democrats are when it comes to crime, when it comes to law and order. Will you please extend my very great thanks, it’s a great honor to get it from Delaware law enforcement” Trump told reporters.