After decades of evading justice, the subject of HBO’s award-winning documentary, “The Jinx: The Life and Deaths of Robert Durst,” has been convicted of murder at last. 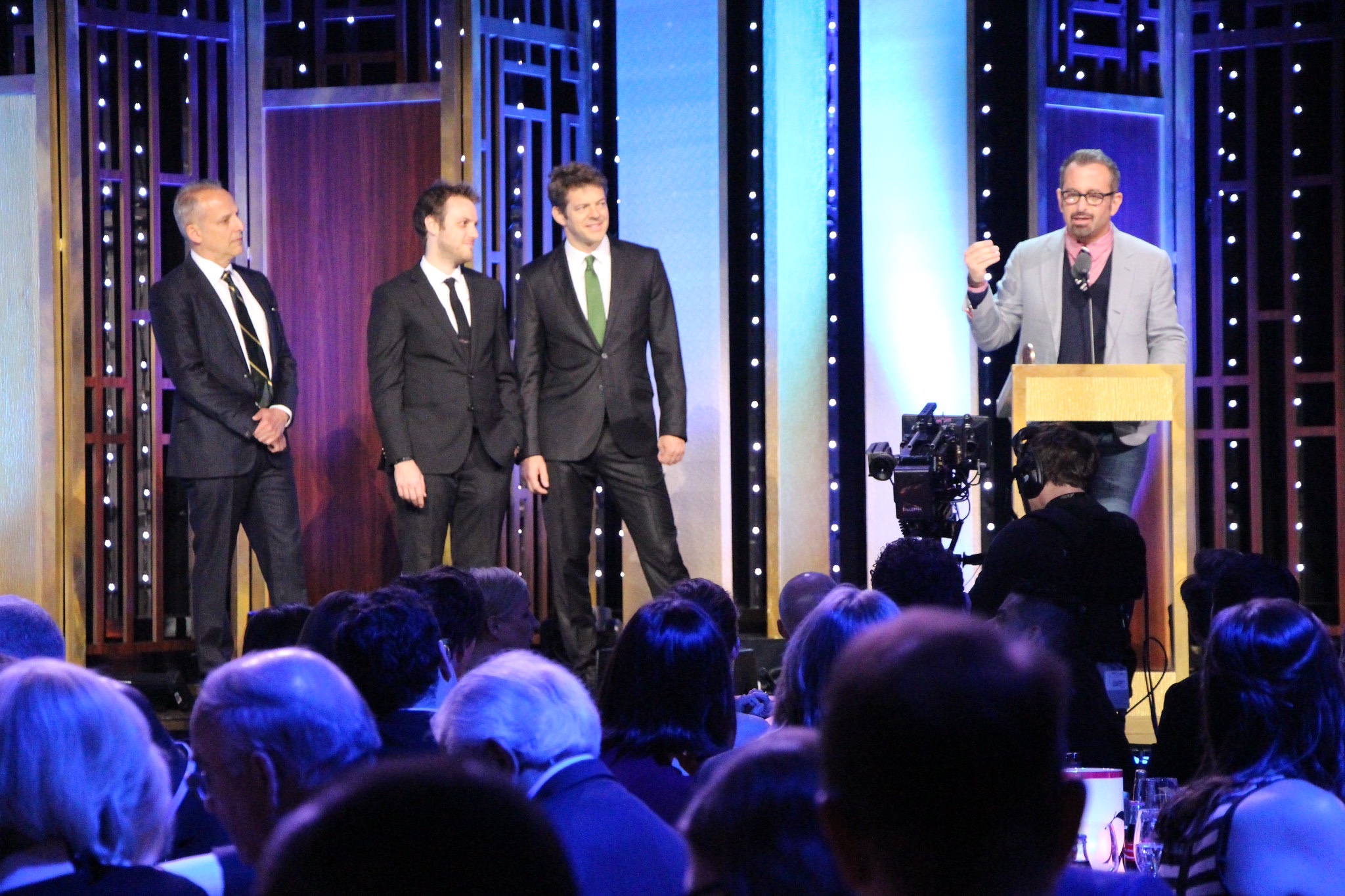 This photo includes the crew of “The Jinx: The Life and Deaths of Robert Durst,” including Producer/Director of Photography Marc Smerling, Executive Producer Jason Blum and Director/ Producer Andrew Jarecki. (Photo/Sarah E. Freeman/Grady College, freemans@uga.edu in New York City, Georgia, on Saturday, May 21, 2016)

In the annals of true crime history, no story is quite like that of Robert Durst.

As any fans of the genre likely know, the Information Age has brought with it a plethora of clues about famous unsolved murders and disappearances, the Durst case being no exception.

Movies have been made, re-made, made more terrible, made more sympathetic and made again. Podcasts, documentaries, exposés. Some perpetrators of the worst crimes in history, sad to say, have devoted followings of fans who write to them, send them money, visit them and even sometimes marry them in prison.

The internet, the Information Age, and a cadre of internet sleuths, authors and gumshoes have solved a number of infamous cold-case crimes in recent years, just putting the pieces together. The advent of another fascinating new technology solved others.

When online, do-it-yourself, easy at home DNA testing kits hit the marketplace, many rejoiced- but not everyone.

Surprise! Some people had half siblings they never knew about. Others had family secrets, like Jack Nicholson, which came out. Adopted kids and the biological parents of adopted kids had new ways of finding each other, regardless of whether or not they wanted to be found.

Decades ago, anonymous sperm donors probably never expected to be found by their offspring, either. But while the donation agency might have been bound by iron-clad confidentiality agreements, the new DNA retail frontier had no such constraints.

Through cousins and uncles, siblings and kin, even those who didn’t want to be found were found.

Including serial killers who had left DNA at famous unsolved crime scenes.

Imagine submitting your DNA to an ancestry-mapping company and receiving word that your DNA almost matches a murder suspect’s, and by the way did you have any living male relatives?

Technology, like the truth, can be a beautiful and terrible thing.

In some cases, it has unquestionably helped catch killers who otherwise would never have seen the inside of a prison cell. And even in cases where it hasn’t yet, the idea that killers still at large spend every day waiting for DNA evidence to catch up to them is not without a certain justice. It’s almost Shakespearean.

Plus, it isn’t as if the technology train has stopped; not by a long shot.

Someday soon, DNA evidence collected decades ago- samples which don’t match any known samples connected with or suspected in the crime, nor anyone arrested for other crimes- will be fed into a supercomputer to produce something Hercule Poirot, Sherlock Holmes and Mma Precious Ramotswe would have swapped their detective badges for.

A photographic portrait of the killer.

In fact this technology, while still imperfect, already exists and has been used successfully. That it is still in its infancy, and therefore very expensive, is currently preventing it from becoming more widely used in more unsolved murder cases.

There are also limitations as of yet. The photographs produced from DNA can’t account for lifestyle factors that greatly impact how you look and how you age. DNA can’t predict how much sun you might get, for instance, or whether or not someone will wear a beard. It can’t tell investigators what kind of hairstyle someone might have or if they favor glasses or contacts.

But it can produce a face, and someday soon, even the tiniest DNA samples will spit photos out of a computer for police investigators at the push of a button- and we might have a whole other set of problems, but that’s beside the point.

Most of the time the detective pushes the button however, it won’t matter at all that the face isn’t as accurate as a photograph. After entering that old cold-case DNA into the magical new machine, the face which appears will not be that of a stranger to police. Beard or no beard, receding hairline or hair plugs, the cops will recognize the person instantly.

The thing with most cold cases is that police investigators already have a pretty good idea who done it. That they haven’t been able to prove it hasn’t dimmed their suspicions, nor have the years.

When that portrait of a killer is rendered onto that computer screen and printed out, the exclamations in the room won’t be “Huh?”

The thing about most killers- something law enforcement officers, investigators, detectives, gumshoes and true crime enthusiasts can tell you- is that that usually give themselves away.

Criminals, in spite of what it shows us in the more lurid crime movies, usually aren’t all that smart. If they were, they wouldn’t be criminals. Most smart people make the calculation that, even lacking moral constraints, the legal consequences of crime and the likelihood of being caught wouldn’t be worth the risk. And they’d be right.

If someone is acting guilty- fleeing, disguising themselves, getting caught with a large amount of cash, lying- they probably are guilty. There is a reason most police work is called routine. It usually is. Every scheming spouse and amateur insurance money arsonist thinks they are the first person to think up such a clever scheme.

Investigators don’t always have enough evidence to charge the person they suspect- the burden of proof to convict in a first-degree murder case is very high- and in spite of their best efforts, and the case goes cold.

But police investigators still suspect who they suspect.

And when a person they suspect of killing his wife and at least two other people, and getting away with for decades, appears in an HBO documentary about these suspected crimes, police watch.

Robert Durst has been a subject of books, movies and fascination for true crime internet sleuths everywhere.

The award-winning HBO documentary about him, “The Jinx: The Life and Deaths of Robert Durst,” was very popular. It was called “The Jinx” because of of Durst’s absurd claim of innocence: “I didn’t kill those three murdered people who’s only connection was me: I’m just that unlucky.”

Never mind that the vast majority of us will never know even one person killed in an unsolved murder, thankfully; to say nothing of at least three.

That Durst thought it would be a good idea to appear in the documentary and answer questions about his suspected involvement in these crimes must have given police investigators a reason to hope.

They did not hope in vain.

At one point, trying to evade police, Durst attempted to hide in Galveston Texas disguised as a woman. Unfortunately for him, but more unfortunately for the neighbor, a neighbor probably found out about the disguise. Robert Durst is suspected of killing him too and dismembering his body.

This is the crime for which the police have the most evidence. In fact Durst admits to disposing of the body but claimed he acted in self-defense.

The mystery of how Durst, the millionaire son of an even wealthier real estate developer, managed to stay out of jail all those years is probably what attracted HBO documentarians to the case.

On the last episode of “The Jinx”, HBO interviewers sat down with Robert Durst to confront him about some inconsistencies in his statements to police and the evidence against him.

What happened next was neater than anything Agatha Christie could’ve dreamed up; it was better than Perry Mason.

Durst was shown an envelope addressed to police informing them about a dead body at a certain address. The body was that of his friend Susan Berman, whom Durst was suspected of killing.

The handwriting was Durst’s own.

Looking obviously flustered, Durst did what any guilty person caught dead to rights might do; he fled to the bathroom.

On it, he can clearly be heard swearing and breathing heavily.

“Well, that’s it,” Durst says under his breath (and into the microphone). “They caught me, I’m caught. It’s over.”

Killers often tell on themselves.

“The arc of the moral universe is long,” said Rev. Martin Luther King Jr. “But in the end it bends towards justice.”

The criminal career of Robert Durst was indeed long, but it finally came to an end yesterday when Durst was found guilty of the murder of Susan Berman.

His hair is white, his skin far more lined than it was in the days when he could charm, and kill, his young wife and was handsome enough to be played by Ryan Gosling opposite Kirsten Dunst.

78-year old Durst looked frail at his trial, which was delayed by COVID-19. While he has now been found guilty of killing his friend Susan Berman, he has yet to be charged in the killing of his wife, Kathie McCormack Durst.

Kathie Durst disappeared on January 31, 1982 when she was only 29. Her body has never been found. Her family, and police investigators, have been convinced for decades that Robert Durst killed her and that Susan Berman, who Durst would later also kill, helped him conceal the crime.

1.3 million women are the reported victims of domestic violence every year in the United States. Millions more suffer in silence. If you or someone you know is experiencing partner violence, please don’t wait.