No Need for Legislative Retaliation Against Israel for Barring Reps.

Reps. Ilhan Omar and Rashida Tlaib have been retaliating against Israel all along. Just today they shared a cartoon by an award-winning Holocaust cartoonist to millions of social media followers. 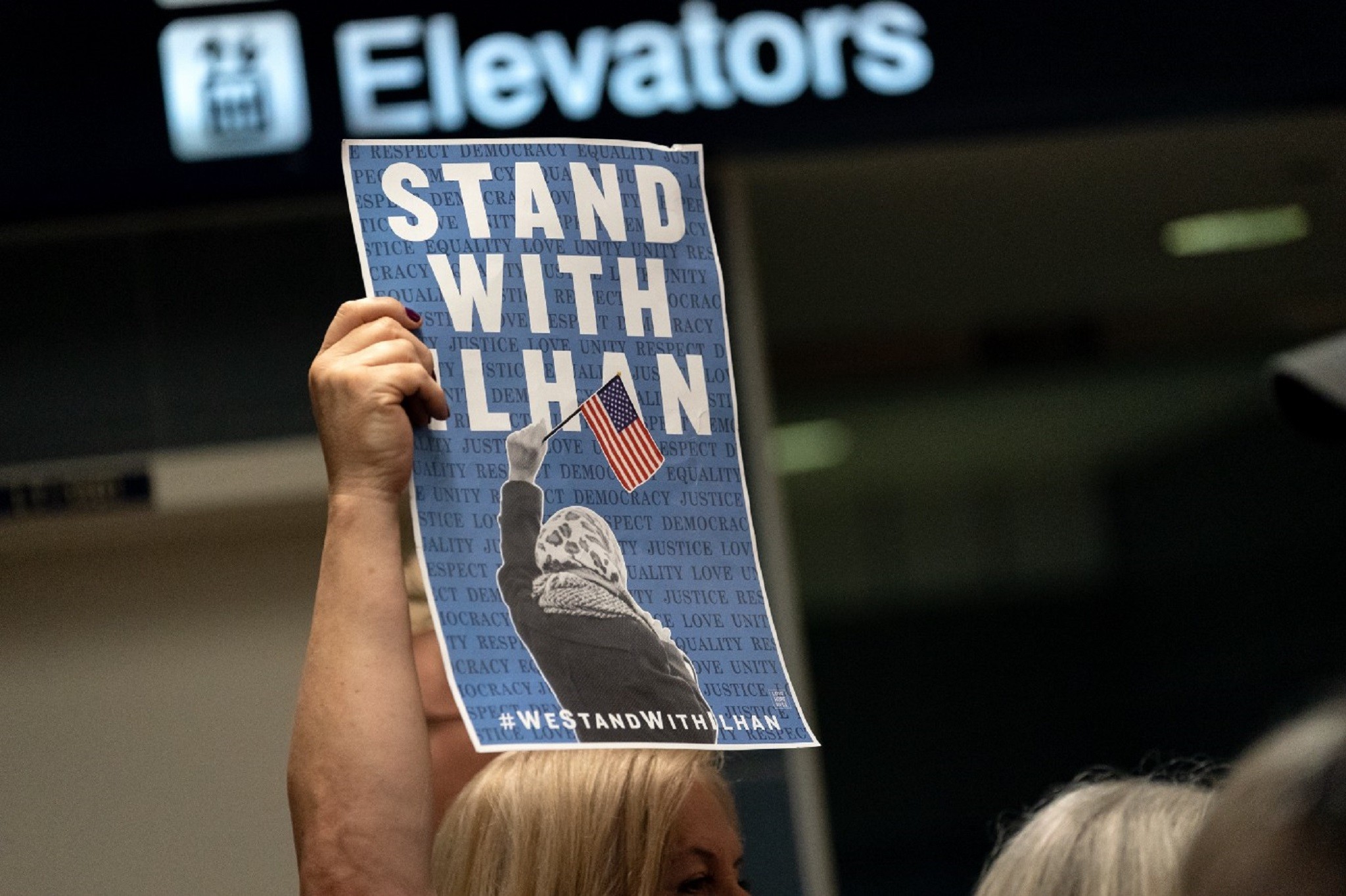 A Stand With Ilhan sign held by a supporter at MSP Airport in Minnesota. July 19, 2019. (Photo: Lorie Shaull)

Just in case there were any lingering doubts as to the true feelings of Reps. Rashida Tlaib and Ilhan Omar about the world’s only Jewish state, they reminded everyone today.

Tlaib and Omar also demonstrated exactly why Israel was and is completely justified in denying them entry. House Representatives considering retaliatory action against Israel for doing so are deeply misguided.

Not satisfied with merely denying the existence of the Holocaust, in some circles, including those obviously traversed by Tlaib and Omar, a Holocaust cartoon contest is perfectly reasonable. Why not?

For comparison, let’s imagine someone denying the 1619 transatlantic slave trade ever happened and holding a cartoon contest about it.

Supporting BDS, which is a boycott, divestment and sanctions movement designed to drive Israel out of existence “peacefully”, is one thing. Trying to pass U.S. legislation supporting BDS against Israel- without specifically naming Israel, which fooled exactly no one- is another.

Making openly anti-Semitic statements to millions of social media followers accusing Jewish people of controlling the world through a combination of money and magical mind control, yet another.

This is all supposed to be water under the bridge. But as today’s example proves, the more water we allow to flow into this river of anti-Semitism, the more it continues to rise. Eventually, we’re going to run out of bridges.

As the non-apology apologies have (sometimes) flown, Jewish leadership in America, on both sides of the political aisle, have been watching the behavior of Omar and Tlaib closely. And with increasing trepidation.

Even as Reps. Tlaib and Omar have clashed with Democratic leadership intent on keeping them from, at the very least, trashing their colleagues in Congress on Twitter and implying that even their fellow Democrats are on the Jewish take, Jewish voters have attended the proceedings nervously.

Today’s actions on the part of these two legislators have again made it clear:

Omar and Tlaib will not consider the possibly that they might be wrong on this issue. They will not entertain the idea that perhaps those more experienced in Congress might be right. They will not apologize to Israel for creating this diplomatic nightmare for the U.S.

Instead, Omar and Tlaib have doubled-down on the hatred they reserve specifically for Israel, the only Jewish-majority nation in the world, awash in a sea of Muslim-majority countries.

Out of all of the ills and injustices under heaven, in a global big picture of nearly 8 billion people where Israel doesn’t even come close to cracking the top ten list of human rights infringers, it is hard to understand this fixation on Israel as anything but blatant anti-Semitism.

If Tlaib and Omar were as outspoken about, let’s say, China; a country currently interring millions of Uighur Muslims in reeducation camps, it would at least give some credibility to their claims that Israel is an apartheid state ruthlessly oppressing the rightful Muslim inhabitants.

If Tlaib and Omar were to weigh in on news today that their beloved “country” of Palestine has today barred LGBTQ+ activists from the West Bank, they might seem more credible as champions of human rights.

Even looking at the much smaller picture, that of the two home districts of Reps. Tlaib and Omar, Michigan’s 13th and Minnesota’s 5th respectively, it is also difficult to understand their fixation on Israel as anything but anti-Semitism.

Is railing against Israel really the reason voters in these two districts elected Omar and Tlaib?

In districts suffering from a crisis of opioid addiction, lack of affordable health care; in communities without even access to clean water, do boycotts against Israel and disputed Palestinian land rights from six decades ago really top the list of voter concerns?

Any reasonable person would be skeptical.

But the left isn’t exactly sounding all that reasonable lately. Perhaps it is the ever-looming boogeyman- the 100-ton elephant in any room with more than two Democrats in it- Donald Trump who is to blame for all the Democratic wagon circling lately.

But the corresponding need to defend anyone sporting a (-D) at the end of their title is a dangerous one, especially when it comes to the toxic and insidious topic of anti-Semitism.

Reps. Tlaib and Omar have now become the hill upon which Democrats, whether they agree with BDS or not (and most don’t), must fight. And die.

It may be heartbreaking for American Jews to see their Democratic party defending the indefensible. But for most Jewish voters in America, who overwhelmingly vote Democrat, the Democratic party still feels like home.

Jewish Democrats proudly point to Speaker of the House Nancy Pelosi, who has not only spoken uncharacteristically harshly to her colleagues but who has also strongly affirmed Jewish interests and reaffirmed support for Israel in no uncertain terms.

But while Democratic leadership has been affirming Jewish support, Tlaib and Omar have been just as busily undermining it.

The problem is, disagreeing with the so-called “Squad” members over Israel puts Democratic leadership in the absolutely untenable and politically poisonous position of siding with Donald Trump.

That, loyalty to Jewish Democrats and support for a long-time U.S. ally aside, is something Democrats, especially in the lead up to the 2020 election, simply cannot afford to do.

As the recently flubbed and flummoxed New York Times headline fiasco demonstrated; anything but rancorous hatred toward Donald Trump will not be tolerated by the left.

On the left, defeating Donald Trump has become the end all, be all. The holy grail which must be attained by any means necessary. Even if that means now includes the deeply unpalatable acceptance of blatant anti-Semitism within the ranks of Democratic party.

However, as anyone who can crack a history book can tell you, the means can never justify the ends, because the means and ends can never be separated. You can’t cure violence with violence; it’s been tried.

Anti-Semitism, in the U.S. and around the world, breeds nothing but violence. Embracing anti-Semitism in order to defeat Donald Trump is a mistake the Democratic party simply cannot afford to make. Nor will it work.

Democrats must stand up for Israel against their colleagues, even if that means the political kiss of death; a retweet by President Trump.

Israel is a sovereign nation with the right to bar anyone determined to pose a threat. And anyone willing to use their elected office to promote BDS and spread anti-Semitism to millions of people is a threat.

House Democrats, as well as the voters in Minnesota’s 5th and Michigan’s 13th, should do more than respect Israel’s decision as difficult diplomatically but ultimately sound.

They should join Israel in barring Rep. Rashida Tlaib and Rep. Ilhan Omar from the committees on which they serve at the pleasure of the American people.

And in November 2020, voters should bar them from the House of Representatives completely.

Rashida Tlaib and Ilhan Omar obviously care much more about the plight of Palestinians on the West Bank than they do about the constituents in their home districts.

As such, Tlaib and Omar should work openly as activists for the cause of destroying Israel, not claim to represent the voters who elected them.