No End in Sight to Portland Violence

A man has been killed after clashing with protestors in Portland. State and local officials are at loss as to how to stop the violence. 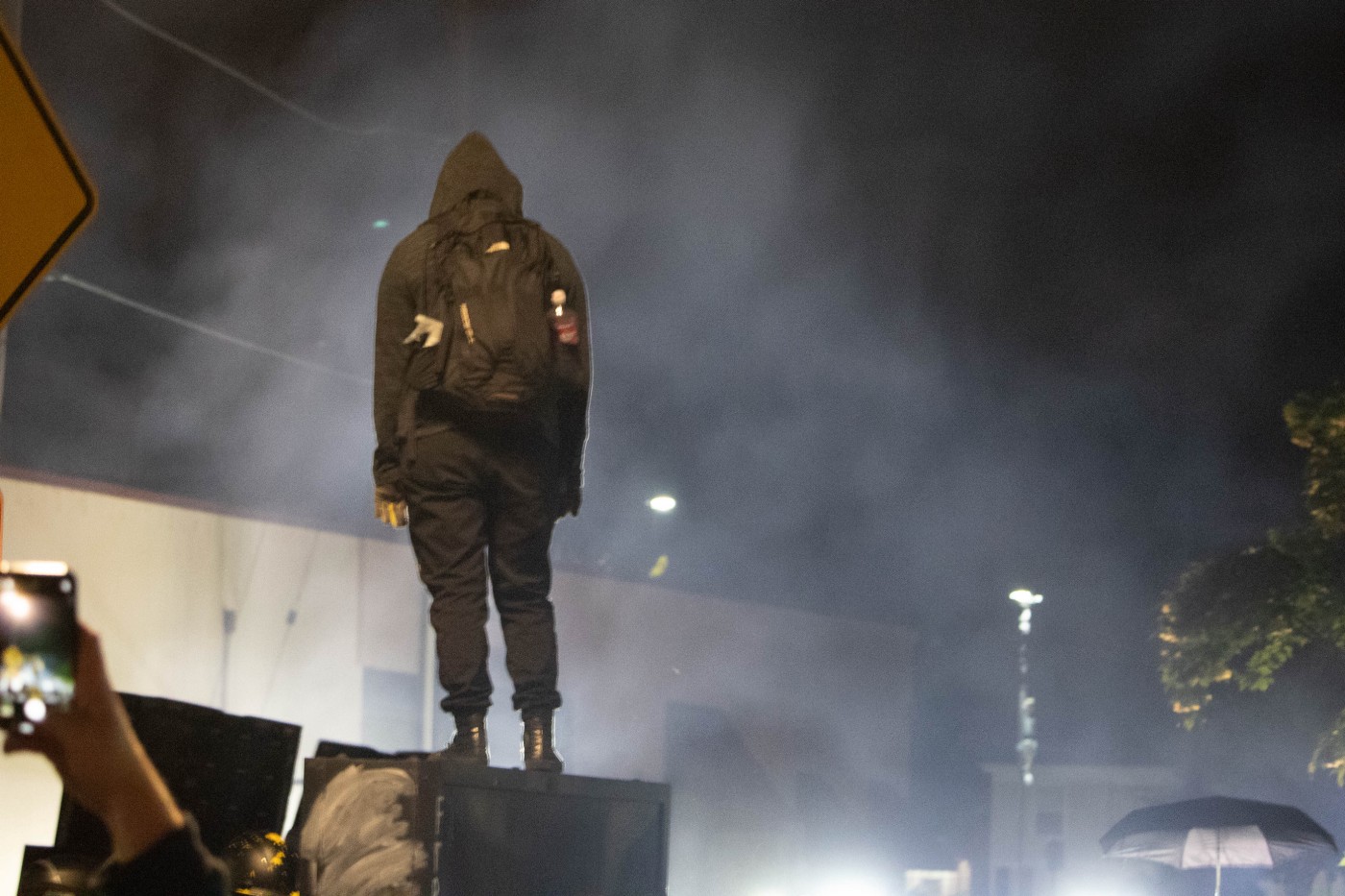 Aaron Danielson, who went by Jay, has been identified as the man shot dead on Saturday night in Portland, Oregon. He was shot after supporters of President Donald Trump and Black Lives Matter protesters clashed in downtown Portland.

The Portland Police Bureau said in a statement the shooting took place about 8:46 p.m. and that officers nearby heard the gunfire. “A Homicide Investigation is underway,” a spokesperson from the PPD said, adding that no suspect information was being released.

“Portland Police officers heard sounds of gunfire from the area of Southeast 3rd Avenue and Southwest Alder Street. They responded and located a victim with a gunshot wound to the chest. Medical responded and determined that the victim was deceased,” the Portland Police Bureau said in a statement.

Graphic photos and video has emerged of the victim lying on the ground wearing a “Patriot Prayer” hat and a “Blue Lives Matter” patch on his pants. In video footage taken of the shooting, a man can be heard shouting, “We got some right here! We got a couple right here!” A second man then says, “Right here?” Another man can be heard saying, “He’s pulling it out,” or “pull it out,” followed by two shots.

Nearby protestors quickly rushed to assist the victim. Multiple videos posted to social media showed medics, police officers and other authorities surrounding Danielson, who suffered at least one bullet wound to his chest.

The shooting happened hours after a caravan of vehicles with people supporting President Trump arrived in Portland and encountered Black Lives Matter and Antifa protesters. Video footage shows that, as the caravan arrived in the city, protesters attempted to stop them by standing in the street and blocking bridges. Trump supporters fired paintball pellets and used bear spray to clear the roadway as counter-protesters threw things at the Trump caravan.

After the tragic incident, Black Lives Matter and Antifa supporters in Portland were seen celebrating the murder.

“And tonight I just got word, the person who died was a Patriot Prayer person,” one woman said. “He was a f***ing Nazi. Our community held its own and took out the trash. I’m not going to shed any tears over a Nazi.”

“1st- We love Jay and he had such a huge heart. God bless him and the life he lived,” Gibson said in a facebook post on Sunday afternoon.

The man being investigated by police in the fatal shooting has been identified as Michael Forest Reinoehl, according to a report from the Oregonian. Reinoehl’s posts on social media indicate he has military experience and attended many protests in Portland, calling himself“100% ANTIFA” and ready for “war”.

“I am 100 % ANTIFA all the way! I am willing to fight for my brothers and sisters!” he wrote on Instagram.

“It will be a fight like no other! It will be a war and like all wars there will be casualties. I was in the army and I hated it. I did not feel like fighting for them would ever be a good cause. Today’s protesters and antifa are my brothers in arms,” Reinoehl wrote.

Reinoehl was previously arrested at an Antifa riot in July and charged with illegally possessing a loaded firearm and other crimes. He was let go and the charges were never pursued. After the shooting on Saturday, Reinoehl was allegedly identified by the tattoo of a “black power” fist on his neck by his estranged sister who recognized him in the photos.

“We reached out to police and confirmed that we recognized Michael in the screenshots,” she told the paper.

Mayor Ted Wheeler spoke about the incident in a news conference Sunday: “This afternoon my heart is heavy. My heart goes out to the family and friends of the man who was killed last night on the streets of our city. I mourn with you.”

“The tragedy of last night cannot be repeated,” Wheeler said. “All of us must take a stance against violence. It doesn’t matter who you are or what your politics are.”

However, Wheeler immediately placed blame on President Trump for the violence. “Do you seriously wonder, Mr. President, why this is the first time in decades that America has seen this level of violence?” Wheeler continued during his press conference about the shooting.

“It’s you who have created the hate and the division. It’s you who have not found a way to say the names of Black people people killed by police officers even as people in law enforcement have, and it’s you who claimed that white supremacists are good people.”

After three consecutive months of nightly protests and rioting, Mayor Ted Wheeler (D-OR) has continued to refuse federal assistance from the Trump Administration to help maintain peace in the city, saying “no thanks” in a letter written to the President the day before the shooting.

Yet again, you said you offered to aid Portland by sending in federal law enforcement to our city. On behalf of the City of Portland: No thanks.

We don’t need your politics of division and demagoguery. Portlanders are onto you. We have already seen your reckless disregard for human life in your bumbling response to the COVID pandemic. And we know you’ve reached the conclusion that images of violence or vandalism are your only ticket to reelection.

There is no place for looting, arson, or vandalism in our city. There is no room here for racist violence or those who wish to bring their ideology of hate into our community. Those who commit criminal acts will be apprehended and prosecuted under the law.

Tens of thousands of Portlanders have peacefully protested and marched for the noble cause of fixing our broken criminal justice system. They are part of the proud progressive tradition of Portlanders fighting for justice — from racial justice to economic justice to environmental justice.

When you sent the Feds to Portland last month, you made the situation far worse. Your offer to repeat that disaster is a cynical attempt to stoke fear and distract us from the real work of our city.

In Portland, we are focused on coming together as a community to solve the serious challenges we face due to systemic racism, a global pandemic and an economic recession.

After Wheeler attempted to place blame on President Trump, Trump took to Twitter to criticize Mayor Wheeler, local leaders and other leaders in Washington for openly refusing help from the National Guard.

The president responded to these statements on Twitter and wrote, “Ted Wheeler, the wacky Radical Left Do Nothing Democrat Mayor of Portland, who has watched great death and destruction of his City during his tenure, thinks this lawless situation should go on forever. Wrong! Portland will never recover with a fool for a Mayor.”

“He tried mixing with the Agitators and Anarchists and they mocked him. He would like to blame me and the Federal Government for going in, but he hasn’t seen anything yet,” the president added.

“The people of Portland, like all other cities & parts of our great Country, want Law & Order. The Radical Left Democrat Mayors, like the dummy running Portland, or the guy right now in his basement unwilling to lead or even speak out against crime, will never be able to do it!” Trump continued.

It is possible that Mayor Wheeler may already be regretting antagonizing Donald Trump, rather than accepting help from federal authorities as other cities have done.

Wheeler condemned Trump by letter on August 28; at a press conference on August 30. On August 31, protestors marched to Mayor Ted Wheeler’s apartment building where they demanded Wheeler’s resignation and attempted to set his residential building on fire. 20 people were arrested after the protest- in honor on Mayor Wheeler’s birthday- was declared a riot.

Nor does the Governor of Oregon have a better plan to reduce the violence in Portland. After unveiling a 6-point plan to restore order in the streets of Portland, the law enforcement agencies Gov. Kate Brown listed as resources in her plan issued statements saying they weren’t consulted and had no intention whatsoever of sending their officers into harm’s way in Portland.

Mayor Wheeler seems intent on blaming Donald Trump, but blaming Trump is not a plan to reduce violence in Portland. Governor Brown put together a six-point plan, without consulting the agencies she included in that plan.

With elected officials like these, it is difficult to see how the citizens of Portland will reclaim their city from the escalating violence that has engulfed it. It is also easy to see why businesses in downtown Portland are leaving the area as fast as they can manage it.