National Rifle Association in the Crosshairs

New York’s AG has sued to dissolve the NRA. What’s behind the move? 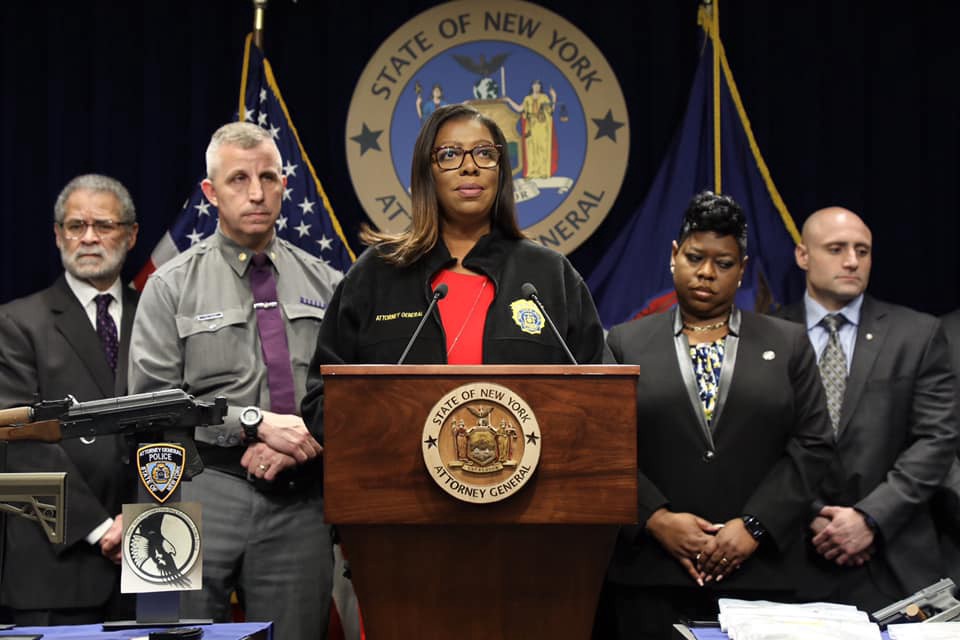 New York Attorney General Letitia James filed a lawsuit against the National Rifle Association and its leadership to dissolve the NRA in its entirety this week, after an 18-month investigation.

Attorney General James alleges that years of corruption have undermined the organization’s ability to continue operating as a nonprofit. She claims in a lawsuit that she found financial malfeasance that contributed to more than a $64 million loss over a three-year period.

“The NRA’s influence has been so powerful that the organization went unchecked for decades while top executives funneled millions into their own pockets,” James said in a statement. “The NRA is fraught with fraud and abuse, which is why, today, we seek to dissolve the NRA, because no organization is above the law.”

AG James is suing the NRA over allegations that four current or former high-ranking executives, such as 39-year CEO Wayne LaPierre, used millions of dollars of charitable funds for expensive personal trips, awarded contracts for friends and family members and other questionable expenditures.

“The central figure behind this scheme was none other than Wayne LaPierre… Mr. LaPierre exploited the organization for his and his family’s financial benefit.”

The lawsuit claims the four executives failed in their duty to the NRA by using NRA reserves for personal use and requested a New York court to order LaPierre and other current and former executives to pay back the mismanaged funds and inflated salaries her investigation found.

The lawsuit also seeks to remove LaPierre and Frazer from the organization’s leadership and prevent all four individuals from ever serving on the board of a charity in New York in the future.

James has jurisdiction over the organization due to its registered location in New York. Seeking to dissolve the NRA is the most aggressive approach she could have taken against the nonprofit.

James, who is a Democrat, threatened to investigate the NRA’s nonprofit status during her campaign for attorney general and in 2018 referred to the group as a “terrorist organization.”

James claims the lawsuit was unrelated to her personal views on gun violence.

The NRA has built up a reputation as one of the nation’s strongest protectors of gun rights since its incorporation in 1871. The organization has become a major force and lobbying power in national politics and government.

NRA President Carolyn Meadows responded to the actions of the Attorney General, and said in a statement that the organization “will not shrink from this fight — we will confront it and prevail.”

“This was a baseless, premeditated attack on our organization and the Second Amendment freedoms it fights to defend,” she said. “You could have set your watch by it: the investigation was going to reach its crescendo as we move into the 2020 election cycle. It’s a transparent attempt to score political points and attack the leading voice in opposition to the leftist agenda. This has been a power grab by a political opportunist — a desperate move that is part of a rank political vendetta. Our members won’t be intimidated or bullied in their defense of political and constitutional freedom.”

If indeed the move is politically motivated, it is hard to say whether this effort to dismantle the NRA will help Democrats on Election Day in November.

Democrats in swing states, such as Michigan, have expressed doubts. Critics of the move see it as an attempt to score political points by appearing to “stand up to the NRA,” with a lawsuit unlikely to dissolve the NRA.

Republicans have noted the timing of the filing, pointing out that the legal case against the NRA will take years to be be tried and litigated but that the political fallout will begin immediately. Republicans insist that gun-owning Americans, a group of people which has increased exponentially during the last seven months of record gun sales, will not be more inclined to vote for presumptive Democratic nominee Joe Biden as a result of this legal filing against the NRA.

President Trump called the NY Attorney General’s actions against the NRA a “terrible thing” and suggested they move locations.

“I think the NRA should move to Texas, and lead a very good and beautiful life…I think Texas would be a great place and an appropriate place for the NRA,” said Trump.

In an interview with Rachel Maddow today, AG James defended her suit and dismissed Trump’s calls for the NRA to leave New York.

“To be clear, no charity registered in NYS, including the @NRA can dissolve and relocate to another state without the approval of my office or of the Supreme Court of NY.”

“As long as our lawsuit continues, the NRA must stay right where it is & answer for their deep-rooted fraud.” — NY AG Leticia James, Twitter.