On Wednesday, a group of social justice demonstrators accosted the Mayor at a popular restaurant. 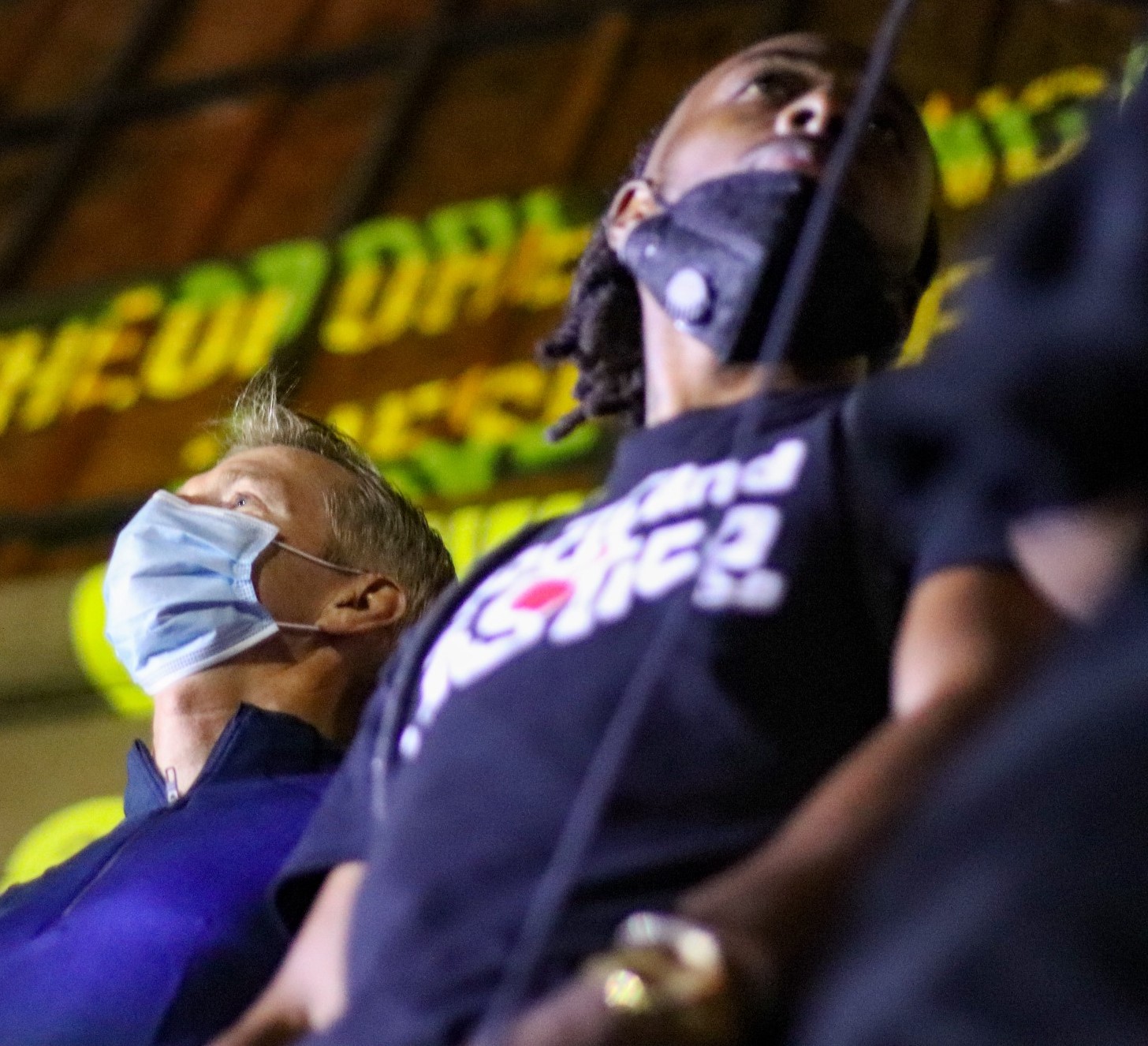 “On Wednesday evening, during a non-work related dinner with a friend in a designated outdoor area, Mayor Wheeler was confronted by a group of people. The Mayor had been seated for about five minutes when a group of people began shouting obscenities at the Mayor from outside the tent.”

“The Mayor attempted to ignore the group, but eventually they pushed their way past restaurant employees at the entrance and came inside. The Mayor asked them to leave. At that point, one member of the group started swatting at the Mayor and made physical contact with him. The Mayor was not injured. Restaurant staff persuaded the group to leave. Police arrived shortly after the group dispersed.”

“The Mayor is committed to supporting local businesses and wants others to do the same. Given the tenor of political discourse nationally and locally, it’s not unusual for people to confront the Mayor and other elected officials in public. It’s part of the job. The Mayor will continue to support local restaurants and businesses as often as he can. He urges others to do the same.” — The Office of Mayor Ted Wheeler, Official Statement.

What the Mayor’s office described as a “swatting”, and the Portland Police Department described as a “punching”, the activists themselves described on Twitter as a successful demonstration.

Beleaguered Mayor Ted Wheeler can’t seem to do anything right.

From one side, the progressive Democrat reelected in November is being relentlessly pressured by business owners and city leaders to do something, anything, about the nightly riots which continue to shake Portland. Coupled with the city’s ever-worsening homelessness crisis, the sprees of vandalism, violence, arson, and property damage have sent Portland business owners scrambling for the exits.

Small businesses and major corporations alike are closing down shop in Portland, relocating their operations elsewhere. Some high-profile defectors aren’t planning on returning.

Residential property owners in the afflicted areas aren’t very happy with Mayor Wheeler either. As over 100 riots have been declared in Portland over the past few months, homeowners have watched their property values plummet.

There has also been a major spike in crime in the Portland metropolitan area over the past six months. Like so many other major U.S. cities, Portland has seen a disheartening increase in violent crime in particular.

That violent crime rates overall have been on the decline since a catastrophic peak in 1990’s is of little comfort to employers who can’t promise their employees and customers safety in places like downtown Portland.

In addition to constituents, city leaders and business owners angry about out-of-control violence in Portland, and their insistence the Mayor’s office do something to curb it, Wheeler also has to contend with BLM activists and Antifa protestors.

They think the Mayor’s office is doing too much to quell the nightly demonstrations in Portland.

Activists blame the Mayor’s office for what they view as an escalation in violent tactics used by Portland PD to disperse what would otherwise be peaceful protests. Tear gas, rubber bullets, and other aggressive crowd dispersal tactics have been authorized for use by the Mayor’s office in the past few months. Activists are also upset about Wheelers recent “sweeps” on homeless encampments in the area.

Initially, in the wake of the killing of George Floyd, Mayor Wheeler was in sympathy with the protests. He joined the efforts, even suffering exposure to a chemical crowd dispersal agent himself on one occasion.

However, Mayor Wheeler has changed his tune over the past few months as the violence has continued to escalate. The hopeful tone Wheeler struck during his post-reelection speech in November has been lost in the ever-deepening crisis in Portland.

“We’re going to need to come together as never before to address the short-term issues and the long-term changes and investments needed to rebuild our economy, rebuild confidence in law enforcement and restore hope for our future,” said the Mayor in November.

“My good faith efforts at de-escalation have been met with ongoing violence and even scorn from radical Antifa and anarchists,” Wheeler said in a statement on January 2 after a spate of violent riots marred the New Year.

“In response, it will be necessary to use additional tools and to push the limits of the tools we already have to bring the criminal destruction and violence to an end. It’s time to push back harder against those who are set on destroying our community and to take more risks in fighting lawlessness,” he added.

Antifa demonstrators have apparently gotten the message. With Ted Wheeler sounding more like a law and order candidate every day, activists seem keen to push back even harder to express their equal displeasure with the Mayor’s office. And as the activists who confronted Ted Wheeler this week proved, those wishing to forcefully protest the Mayor’s policies know exactly where to find him.

They even know where he lives.

Or rather, they know where he previously lived. The Mayor was forced to move recently after demonstrators attempted to burn down his apartment building during a protest.

In the wake of Tuesday’s confrontation, Mayor Wheeler decided to take his food to go and left the restaurant. Wheeler did manage to snap a photograph of the woman who assaulted him, however. She has been identified as Tracy Molina, a well-known social justice advocate who often participates in demonstrations against police violence in Portland.

While the Mayor can be heard in the video claiming to have been assaulted, Wheeler doesn’t plan to press charges. Nor obviously does he intend to condemn the escalating level of political violence.

After all, this isn’t the first time Wheeler has faced hecklers in public. In December, Wheeler was called a “war criminal” by demonstrators who said he has “blood on his hands.”

Given the scene at the U.S. Capitol this week, and continued scenes of violent protests around the country, Wheeler is perhaps a bit naive in downplaying this escalation in tactics against him.

The next time Wheeler is confronted in public, violent agitators may do more than punch him.