May All Your Wars Be Trade Wars

Is World Trade the secret to World Peace? 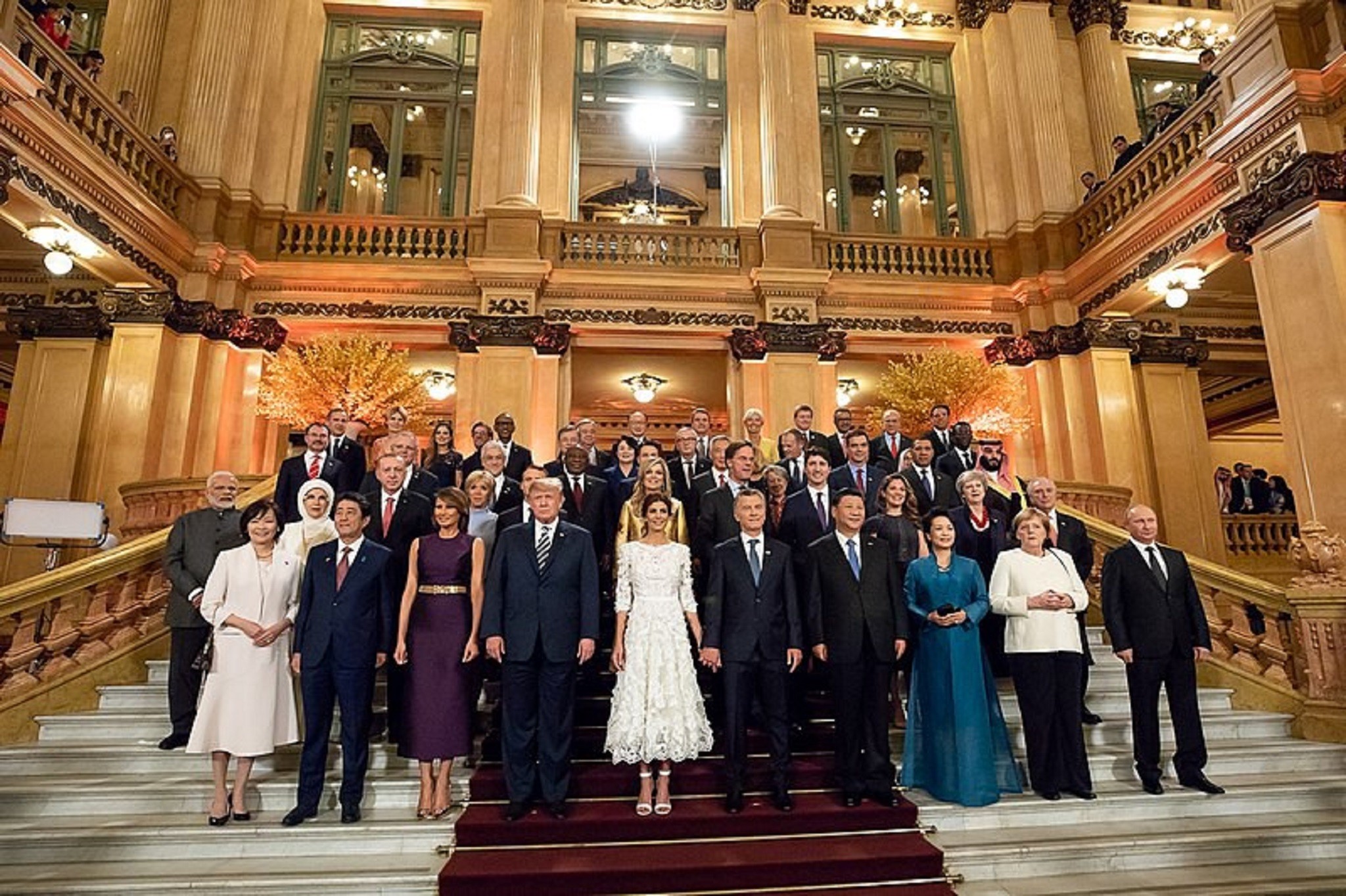 Around the world, between longtime trading partners and nations formerly at odds or even open war with one another alike, a newly formed global trading alliance is taking shape.

Ideological differences; past transgressions; ruffled feathers; even the most dreaded diplomatic crisis, one involving rendition on foreign soil, the murder and, likely, dismemberment of an internationally known journalist: All these are as nothing compared to how profitable global trade has become in this age of technological marvels.

Is world peace profitable at last?

For those who are against war, and violence in any form, the news that the human instinct for cooperation and trade may be stronger than our desire to kill each other, is most welcome.

After being cast as the “Brazilian Donald Trump” by his opposing Brazilian political party, leftist-America decried the election of Jair Bolsonaro in 2018, branding him a right-wing conservative lunatic.

But the American Left thinks the term “right-wing conservative lunatic” is redundant, anyway.

Bolsonaro is not, however, cooperating with their expectations.

In his first speech, President Bolsonaro invited his wife to speak first. Which is, itself, a first. He has also repeatedly stated since being elected that he intends to govern for all Brazilians, not just the ones who voted for him.

Luckily, American liberals don’t really get much say in the democratically elected leadership of other countries, and rightly so. What Liberals seem to have absolutely no interest in doing, is examining the circumstances which led to so much popular support.

Brazilians elected a leader who promised to create a prosperous new free-market trade system through economic reforms and a pro-business approach and pledged to end the long-term, rampant government corruption in Brazil.

Brazilians voted for Bolsonaro because, though it is the largest economy in Latin America, Brazil is also one of the most economically restricted. Many Brazilians feel that the government has failed to help move Brazil prosperously into the global marketplace. And they’re right.

After the election of Bolsonaro, the stock market shot up.

Turkey, facing the withdrawal of American troops from Syria, is also confronting the 2019 realities of global trade partnerships with world leaders who are subject to reelection:

Even though Turkey will have more latitude with American soldiers out of Syria, Turkey is being trade-threatened into a more peaceful resolution with the Kurds than they might have otherwise pursued.

“Stiff sanctions,” for the democratically elected leadership in any country means defeat at the polls.

This makes trade sanctions the only perfectly appropriate way to interfere with the election results of a foreign country. The other methods include war and subterfuge.

As far as world peace is concerned, how are those two working out?

In subterfuge, technology has made getting away with things in complete secrecy much more difficult.

It is also much harder these days to get away with brutal repression. Any nation wishing to stay a part of the global trade gravy train must stay on the respectful side of human rights and the rights of other sovereign nations.

The Kurdish fighters aren’t exactly fluffy bunny rabbits. The Turkish President wasn’t incorrect to label some as part of a terrorist organization. The Turkish authorities have a right to enforce their own laws against murder, destruction, and terrorism.

But the world will be watching: Satellites, surveillance, and news organizations foreign and domestic. And Erdogan knows that.

A lawful, criminal trial is one thing; a brutal military extermination is quite another.

Because Democracy and free trade has another benefit to keeping leaders honest and accountable: Someone else wants their job. Bad. There is always a rival party, with other ideas about how things should be handled, waiting in the wings, watching for any weakness. They are always ready to exploit any vulnerability, any opportunity to usurp and unseat opposition leadership.

Not even the formerly untouchable and unassailable Crown Prince of Saudi Arabia is safe, and he wasn’t exactly democratically elected to office.

The mysterious case of the disappearance and likely murder of journalist Jamal Khashoggi is a perfect illustration of the new power of world trade and the interdependent global marketplace.

The old ways, war and subterfuge, don’t work any more, because very little can be kept a secret. Even serial killings are way, way down the world over after a sharp incline over the previous decades. Why? Because it is much harder to disappear someone these days. Everyone is GPS’d, lo-jacked, tracked and pinging off cell towers everywhere they go.

And that’s just the tracking we know about.

The killing of Jamal Khashoggi was only global news because of technology. Ten years ago we might never have known what happened to him. Today, in spite of no body, no crime scene and no forensic investigation as we understand it, we know a remarkable amount about the crime.

An audio recording exists of the killing because Khashoggi was wearing an Apple Watch. (Possibly.) Kudos to the Turkish government for resisting the temptation to release the recording to the public. We’ll take your word for it.

There are also videos of the men who killed him- five of whom have already been charged with the murder and are facing the death penalty. Saudi prosecutor seeks death penalty for five charged in Khashoggi murder.

There are even videos of the man brought in to impersonate Khashoggi, wearing the dead man’s clothes and leaving the scene of the crime, in an obviously premeditated attempt to try to make it look as if he were still alive.

The video quality is so good, that it is clear the body double was wearing Khashoggi’s clothes, but not his shoes. Because they didn’t fit.

The impersonation failed because investigators used computers to analyze body movements to prove they were not Khashoggi’s.

Satellites overhead, transmitters in dollars, sonic weapons being used on diplomats abroad, cameras and recording devices in every pocket, some so sophisticated and tiny they can be put into anything. Political opponents and the never-ending pain of the free press.

And if all else fails, there are the hacks.

Operating in secret, even in a country like Saudi Arabia without a democratically elected leadership or a free press, is becoming almost impossible.

Since the Khashoggi killing made headlines and caused an international outcry, Saudi Arabia has been scrambling to do damage control. The Saudi Crown Prince, implicated in the killing, has perhaps come to understand what trading with global partners who’s leadership is subject to democratic election really means for his business as usual.

From sanctions, to formal rebukes, to actual physical distance from allies at the Global Summit who couldn’t afford politically to associate themselves with such a terrible scandal and any player in it, the Saudi Crown Prince suffered.

Nor has the fallout ended. U.S. Secretary of State Mike Pompeo, currently on an official tour in the Middle East, is making it perfectly clear that accountability, reputation and complying with human rights standards is nonnegotiable in 2019.

Even China- a billion strong, world powerhouse, and heretofore unassailable- bowed to international pressure last week after an uproar over thousands of Muslims being interred in Chinese re-education camps.

In a surprising sign of the times, the Chinese government allowed international press access to these camps, and released videos of the facilities. The Chinese government claims that these centers are de-radicalization programs designed to eradicate fundamentalist attitudes.

For example, one person was in the camp because he opened a store and refused to sell to non-Muslims, an attitude the Chinese government has deemed ‘radicalized Islam,’.

The very fact that China felt the need to answer for these alleged abuses of human rights show just how far the Chinese government may be willing to go in order to stay in the global marketplace, and how far trade has taken the world in the few short decades since China joined the World Trade Organization in 2001.