“What is true now is that anyone who needs a test can get a test.” — U.S. Dept. of Health and Human Services 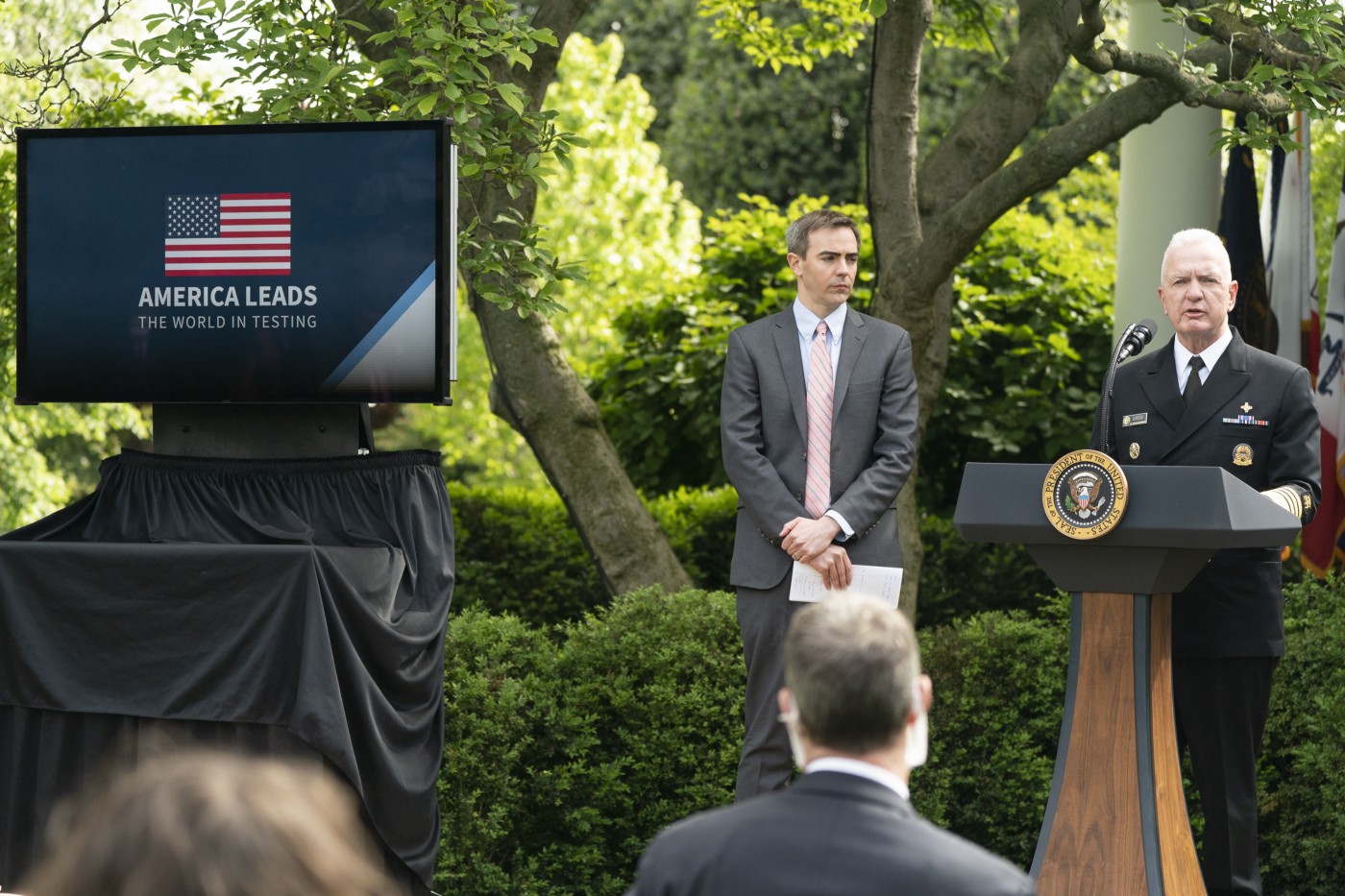 Assistant Secretary of Health Admiral Brett Giroir of the U.S. Public Health Service, joined by Brad Smith the Director of the Center for Medicare and Medicaid Innovation of the U.S. Centers of Medicare and Medicaid Services, delivers remarks at the coronavirus (COVID-19) update briefing on testing capacity Monday, May 11, 2020, in the Rose Garden of the White House. (Official White House Photo by Shealah Craighead)

As the U.S. and countries around the world continue to grapple with the COVID-19 outbreak, few bright spots have emerged.

Frequently asymptomatic or mild, highly transmissible, deadly, and difficult to track, the novel coronavirus COVID-19 has challenged the medical community, the healthcare industry and public health agencies in particular.

Disruption, errors, and supply-line issues have hampered the U.S. response at times throughout the crisis.

There is more than a little good news on the vaccine front, however; National Institute of Health Director Dr. Francis Collins just released a description of an NIH-supported phase 1 human clinical trial currently in the works. A phase 2 clinical trial is also underway and recruiting healthy adults to participate in the process.

COVID-19 testing is another bright spot. Over the past months, the U.S. Department of Health and Human Services has massively scaled-up testing.

“What is true now is that anyone who needs a test can get a test.” — HHS Assistant Secretary of Health, Adm. Brett Giroir. July 27, 2020.

When Assistant Secretary of Health Admiral Brett Giroir began overseeing COVID-19 testing in March, the U.S. was testing about 5,200 people per day. By the beginning of June, about 400,000 tests were being done daily.

Though the U.S. is currently experiencing a resurgence of COVID-19 cases, public health authorities are far more prepared now. Testing is one key area in which U.S. health agencies have come to excel.

“We’re all very concerned about the rise in cases, no doubt about that, and that’s why we’re meeting regularly, we’re surging in assistance, but we are in a much better place,” says Giroir.

It is true that the HHS has been working to support areas experiencing an upsurge in cases. There are now COVID-19 testing surge sites in places hard hit by Covid-19, including Florida’s Miami-Dade county.

As the Assistant Secretary for health, Adm. Giroir serves as the top science and medical advisor to U.S. Department of Health and Human Services Secretary Alex Azar.

The 6,200 member U.S. Public Health Service Commission Corps is under the authority of Adm. Giroir. This little-know powerhouse of public health has been central in efforts to combat COVID-19.

In addition to his many responsibilities related to public health and COVID-19 testing, Adm. Giroir has often had to deal with the politically fraught climate, in which even innocent remarks are misconstrued by a press anxious to get any authority on the record against Donald Trump.

Lately, Giroir has been fielding accusations that Donald Trump is trying to slow down testing and criticisms over the Trump administration’s reluctance to invoke the Defense Production Act to force American companies to increase production to meet demand.

“Every time I’ve met with the president he’s been listening to all the data, he assesses that he understands it…no one is trying to stop testing in this country. No one has ever told me to do that, in fact we want more, we want better, we want quicker,” reports Giroir about his dealings with the Trump administration.

According the Giroir, the U.S. Department of Health and Human Services won’t be happy until test turnaround times are shortened significantly.

To help speed up the process of testing, the FDA has updated its “Testing Supply Substitution Strategies,” with alternatives laboratories can use when traditional reagents are unavailable. The more recent and accurate the data on testing results, the better federal, state, and local public health agencies can deal with hot-spots as they emerge.

Critics of the President are also anxious to get Trump to invoke the Defense Production Act to increase the speed and response of private companies. Companies like Quest Diagnostics have been fielding a majority of the tests; some are in favor of federally enforcing production using the DPA.

But according to Giroir, who insists most U.S. companies are already working to capacity, the DPA isn’t always a viable solution: “We look for every opportunity to invoke the DPA, the DPA isn’t a magic tool. It doesn’t violate the laws of physics; you can’t recreate something out of nothing. Most companies do not need DPA on them.”

Giroir has certainly proven himself willing to break with the President when necessary. On the subject of fetal stem cell research- Giroir feels it may eventually help researchers find a cure for COVID-19, the Trump administration views “promoting the dignity of life from conception to natural death” as one of its top priorities.

Fetal stem cell research, and the methods by which these fetal cells are obtained, is a subject of contention for many conservatives.

“I think it’s very clear that we don’t have models that completely recapitulate what the fetal tissue does. And I just mean this honestly, what I advise the president, or what happens, that’s executive privilege. And I think it was widely reported that this was the president’s decision on the way to go. This was a presidential decision. And he’s the president; he gets to make those decisions.” — Adm. Brett Giroir, The Washington Post. April 20, 2020.

Giroir has also not proven unwilling to credit the Trump administration for the work it has done during COVID-19: “His scientific advisers, including me, provide him very frank advice every single day. Any thought that does not happen, or he does not listen, is blatantly false…it’s one of the most productive working environments at a senior level I’ve been involved in.”

As long as the threat of COVID-19 remains, Giroir and his fellow public health experts at the U.S. Department of Health and Human Services will continue to do everything possible to ensure the U.S. is prepared to weather this pandemic.