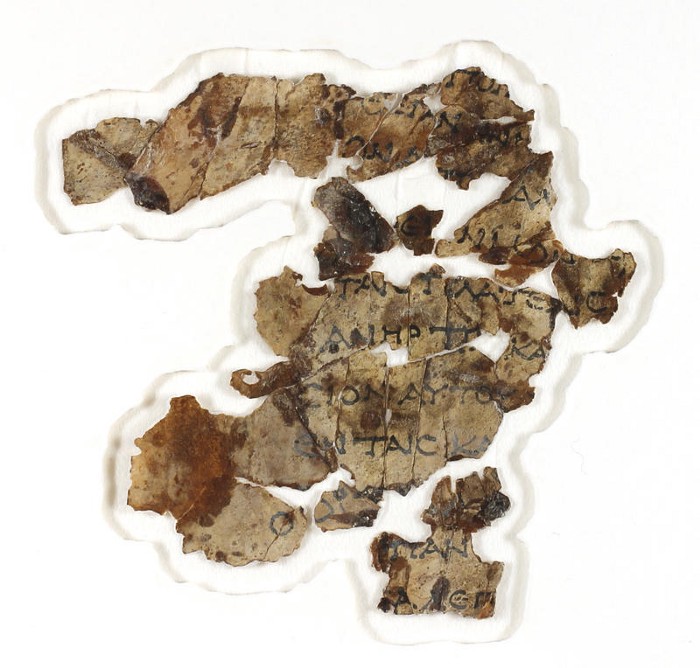 The scrolls are believed to have been hidden in a remote desert cave during the Bar Kochba Revolt, an armed Jewish uprising against Rome during the reign of Emperor Hadrian.

The fragments are the first new scrolls found during archaeological excavations in the Judean Desert in about 60 years.

The fragments of parchment bear lines of Greek text from the books of Zechariah and Nahum and have been dated to around the first century based on the writing style, according to the Israel Antiquities Authority.

The Dead Sea Scrolls, a collection of Jewish texts found in desert caves in the West Bank in the 1940s and 1950s, date from the third century B.C. to the first century A.D and contain the earliest known copies of biblical texts and documents.

The approximately 80 new fragments were found during an Israeli national project to prevent further looting of antiquities from the remote caves and crevices of the desert areas east and southeast of Jerusalem. The project resulted in other historic discoveries, such as a woven basket dated to approximately 10,500 years ago and a 6,000-year-old naturally mummified skeleton of a child.

“More than 80 fragments of different sizes have been uncovered, some of them carrying text, some not,” Dr. Oren Ableman from the IAA Dead Sea Scroll Unit told The Jerusalem Post.

“Based on the script, we dated them to the end of the first century BCE, which means that by the time it was brought to the cave, the scroll was already a century old.”

The IAA, in cooperation with the Civil Administrations Archaeology Department, launched a rescue operation to survey all of the caves in the area after an influx in plundering.

“The desert team showed exceptional courage, dedication and devotion to purpose, rappelling down to caves located between heaven and earth,” said Israel Hasson, the departing director of the Israel Antiquities Authority, which is the custodian of some 15,000 fragments of the scrolls.

Their work in the caves involved “digging and sifting through them, enduring thick and suffocating dust, and returning with gifts of immeasurable worth for mankind,” he added.

The new artifacts matched fragments that belonged to a scroll featuring the biblical Book of Zechariah. Dr. Abelman told the Jerusalem Post the new discovery is particularly groundbreaking because one of the excerpts that was deciphered presents a version of Zechariah that has never been encountered before.

“We had never seen this before,” Ableman said. The word “gates” in verses 16 and 17 of the eighth chapter of Zechariah is replaced by the word “streets” in the newly discovered fragment.

Though it is shocking, it is not uncommon for texts on the Dead Sea Scrolls to be different from the biblical text popular today. Scholars depend on these differences to understand more about how the Bible developed.

“When we think about the biblical text, we think about something very static. It wasn’t static. There are slight differences and some of those differences are important,” said Joe Uziel, head of the antiquities authority’s Dead Sea Scrolls unit. “Every little piece of information that we can add, we can understand a little bit better.”

Antiquities Authority Director Israel Hasson urged the Israeli government to do more to protect other undiscovered treasures after launching this operation.

“The newly discovered scroll fragments are a wake-up call to the state. Resources must be allocated for the completion of this historically important operation,” he said. “We must ensure that we recover all the data that has not yet been discovered in the caves, before the robbers do. Some things are beyond value.”