Cancel culture gets a firm “Non” from the French government. 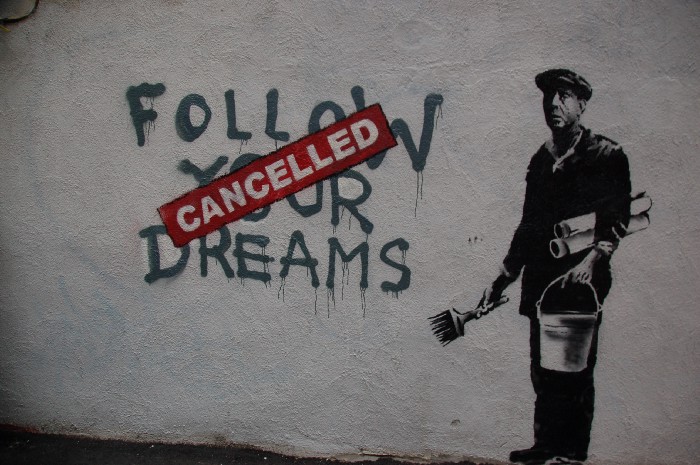 French President Emmanuel Macron had a stark warning for his fellow countrymen last week. In an address, he roundly condemned the American culture wars, cancel culture and critical race theory as divisive, destructive threats to society.

He implored French citizens to reject them wholesale in favor of a new emphasis their shared French identity.

Whether or not cancel culture is a good thing for American society or not, we don’t need to speculate; we are in the process of finding out. For better or for worse, often worse, the online mob is always ready to attack and keyboard warriors, like the Jolt cola-swilling hackers of old, never seem to sleep.

Embraced by some on the left as accountability, cancel culture has been condemned by others, right, left, and center, as corrosive, dangerous, and out-of-control.

But as liberal progressive commenter Kevin Drum recently put it in his thought-provoking analysis of who is really driving the U.S. culture wars: “And for God’s sake, please don’t insult my intelligence by pretending that wokeness and cancel culture are all just figments of the conservative imagination.”

“If you hate the culture wars, blame liberals,” concluded Drum dryly on July 3, 2021, to little fanfare. “Since roughly the year 2000, according to survey data,” Drum found, “Democrats have moved significantly to the left on most hot button social issues while Republicans have moved only slightly right.”

Drum notes that, “between 1994 and 2017, Democrats had gotten three points more liberal while Republicans had gotten about half a point more conservative.”

This push further and further left has hollowed out support for Democrats among voters who consider themselves moderates, even those who typically lean left.

“Our election victory in 2020 was razor thin even though (a) the economy sucked, (b) we were in the middle of a pandemic, (c) voters had had four years to see just what Donald Trump was really like, and (d) our candidate was bland, amiable, white, male Joe Biden,” Drum reflected glumly. “This should scare the hell out of liberals.”

“The truth is that the Democratic Party has been pulled far enough left that even lots of non-crazy people find us just plain scary,” Drum lamented.

Emmanuel Macron, often a darling of U.S. progressives, has always considered himself a moderate rationalist. The French President appears to be one of those non-crazy people who finds U.S. liberal-progressive hardliners a bit scary.

“Recently, white academic theories of racism — and probably the whole woke movement in general — have turned off many moderate Black and Hispanic voters,” Drum warned his fellow Democrats. “Ditto for liberal dismissal of crime and safety issues.”

Drum is hardly alone in these conclusions. Anyone outside the ivory towers of academia taking an honest look at how some of these theories are perceived, including the New York Times, has found that Democratic Party messaging about race issues is driving Latin-Americans and Hispanic-Americans, and other demographics, away from the Democratic Party.

“Unfortunately, the Democratic Party has in some ways lost touch with our electorate,” former U.S. Rep. Debbie Mucarsel-Powell (D-FL) said in an interview after losing her race to a Republican in 2020. “There is this assumption that of course people of color, or the working class, are going to vote for Democrats. We can never assume anything.”

The Week agrees with Kevin Drum about, “The myth of asymmetric polarization,” concluding that, “Yes, progressives are aggressors in the culture war, too,” and lamenting; “The right would be far less politically effective if the left did not continually provide it with evidence to verify the accusation.”

“Democratic Report Raises 2022 Alarms on Messaging and Voter Outreach,” wrote Alexander Burns for the New York Times on June 6, 2021. The report in question is perhaps the most comprehensive look yet at this polarization phenomenon. The report reviewing 2020’s election recommends, “countering Republican misinformation,” defining that as preventing Republicans from tying all Democratic candidates to the far left.

However, as Drum recently pointed out: That Democrats have moved drastically to the left is hardly Republican misinformation or conspiracy. Democratic candidates have moved further left, and the furthest left are certainly the ones garnering the most attention, and not just from the conservative press.

It isn’t hard to see why Macron is hesitant to import the U.S. culture wars.

Mob justice efforts like cancel culture don’t exactly have a better track record than that of the U.S. Justice System, as far as outcomes go. A return to mob justice- no due process, no rights, no trial, no jury, no standard for evidence, no recourse, no legally proscribed right to defend yourself- is hardly an improvement over the system we currently enjoy, imperfect as it is.

That anyone, at anytime, could run afoul of such nameless Twitter authorities; have their livelihoods, reputation and standing the community imperiled; and be powerless to redress it, does make it seem a bit scary.

The French would be wise to reject such a system and some American institutions might want to follow their lead- even if that means risking the displeasure of Twitter.