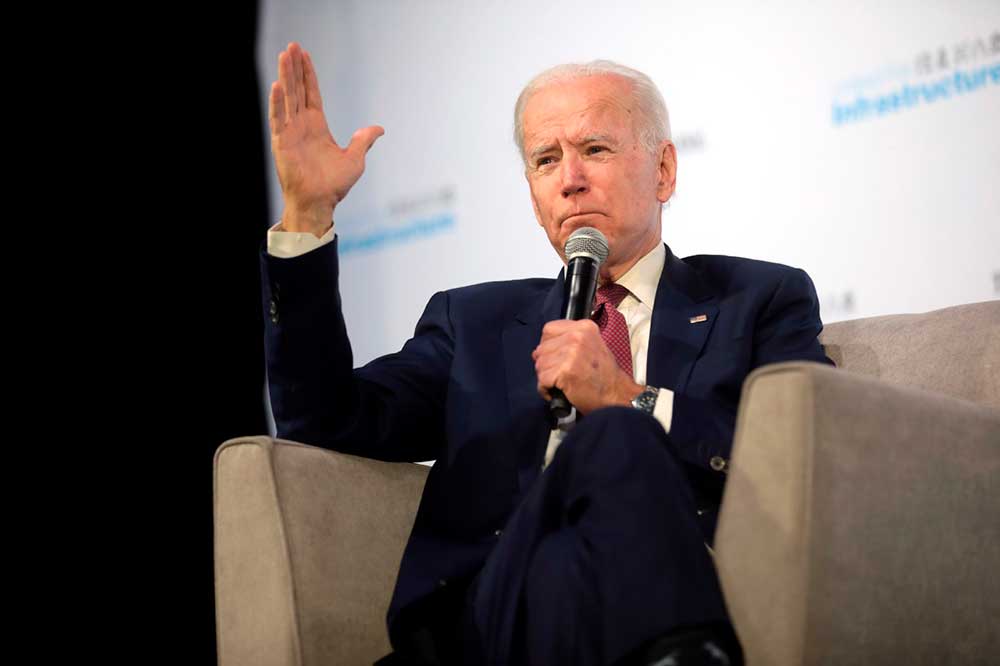 Former Vice President of the United States Joe Biden speaking with attendees at the Moving America Forward Forum hosted by United for Infrastructure at the Student Union at the University of Nevada, Las Vegas in Las Vegas, Nevada. February 15, 2020. (photo: Gage Skidmore)

After that, different factions of the Demcoratic Party- from progressive young activists in California to older moderate Democrats in the South- each have their own ideas about what it will take to accomplish that one over-arching, all-important goal.

“We need someone who can beat Donald Trump.” — Beto O’Rourke

For various reasons related to the strength of the candidate and the efficacy of his campaign, party leaders have settled on Joe Biden.

Sen. Kamala Harris and Sen. Cory Booker were the most recent to endorse Biden, joining Sen. Amy Klobuchar, Pete Buttigieg, Mike Bloomberg and a host of other prominent Democrats in an orchestrated attempt to thwart the campaign of Bernie Sanders.

That Joe Biden has somehow emerged as the unity candidate, in a race against social-justice folk-hero Bernie Sanders, is incensing Sanders supporters. It isn’t difficult to see why.

Former Vice President Biden has run a good campaign, though his fundraising has been anemic. To be fair, in a field so over-crowded, Biden has had to compete with other moderate Democrats for a limited number of donors.

Not to mention the groundswell of financial support for Sen. Bernie Sanders.

And though they are backing Joe Biden now, many prominent Democrats were cagey about endorsing him.

Biden’s debate performances have ranged from good to passable. He has well-documented history of speaking honestly and extemporaneously, though occasionally succumbing to the temptation of every great storyteller to over-embellish a kernel of truth . He is a self-described gaffe machine.

Biden also boasts the long experience of his voting record.

It is a record that sometimes flies in the face of progressives in the modern Democratic Party and includes such dubious positions as voting for the Iraq War, a bankruptcy bill that made it impossible to cancel out student loan debt, and tough-on-crime bills.

There are three. And Democrats will not be facing the Trump campaign Hillary Clinton faced- and failed to beat- in 2016. What Democrats must now face is the formidable campaign machine the Trump administration has painstakingly built in the years since.

In 2020, Trump’s campaign is more massive and further reaching than any political campaign before it. Trump has turned the Republican National Committee into a data-driven spear he intends to drive through the heart of the Democratic Party and their chosen candidate.

“We have turned the R.N.C. into one of the largest data-gathering operations in United States history.” — Brad Parscale, Trump campaign manager

On the other hand, Democrats have the political prowess of former Vice President Joe Biden, and his momentum in the wake of his Super Tuesday turnaround victory.

Biden has shown every indication that he will not shy away from tough questions on the campaign trail.

Touring an auto factory floor in Detroit this morning, Biden answered one auto-worker who asked him about possible gun confiscation under Biden.

“I support the Second Amendment. The Second Amendment right now if you yell ‘fire’, that’s not free speech. From the very beginning, I have a shotgun, a twin gauge, my sons hunt. Guess what? I’m not taking your guns away at all. Do you need 100 rounds?” — Joe Biden. March 10, 2020

O’Rouke’s own ill-conceived declaration of “Hell, yes; we are going to take your AR-15!” may have won him plenty of kudos from the liberal twitteratti, but it also sank his presidential campaign.

A true “unity candidate” like Barack Obama would have avoided the unnecessary drama, and the baggage created by Beto O’Rourke. A Democratic unity candidate gets every Democratic vote- not some votes at the expense of others.

Republicans keeping the Oval Office, maintaining control of the Senate, and a conservative majority in the Supreme Court, plus achieving a majority in the House of Representatives is the worst-case scenario for Democrats in November.

But with a fractured party- its two idealogical wings at war- it isn’t out of the question.