Joe Biden Must Answer for the Worst of the Democratic Party

Republicans have Trump; Democrats have another tiger by the tail. 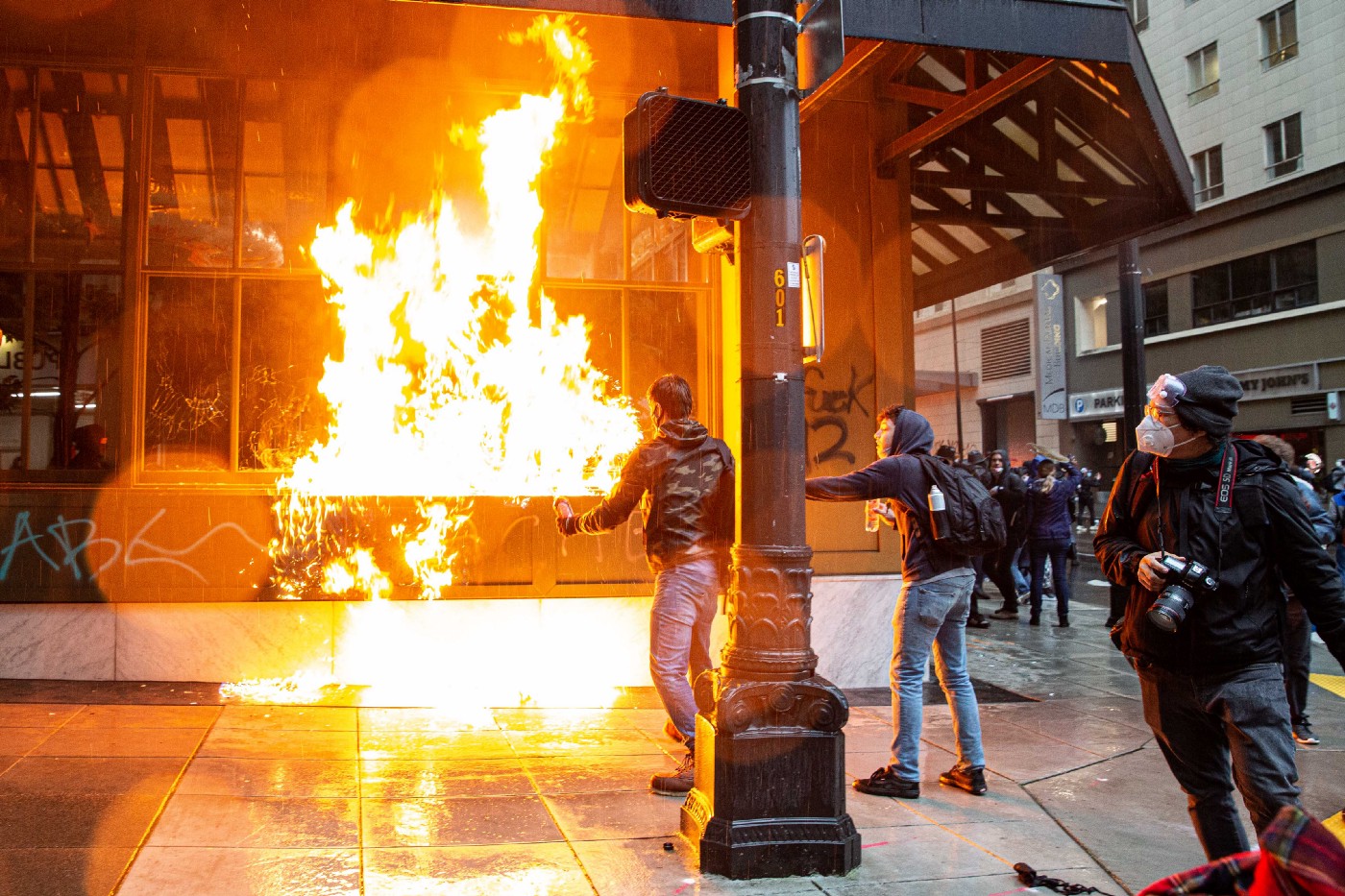 Protesters took to the streets of Seattle, WA to march in response to the death of George Floyd, a black man who was killed while being taken into custody by police in Minneapolis, Minnesota. May 30, 2020. (photo: Kelly Kline)

For better or worse, richer or poorer, Republicans are stuck with the slings and arrows of President Donald J. Trump.

On the other hand, a sea of troubles.

Everyone hates Donald Trump. An army of celebrities are currently out campaigning against him- everyone from the cast of Happy Days to the cast of Seinfeld is getting in on the act. Musicians hate him. Big Tech companies, and almost all the people who work for these all-powerful giants, can’t stand him. Every mainstream media outlet from the Washington Post to the New England Journal of Medicine detests him.

Donald Trump isn’t all that popular on Capitol Hill, either. Elected Republicans, from U.S. Congresspeople and Senators right on down to city council members and precinct committeemen, find themselves being harangued constantly about the online and in-person antics of Donald Trump by outraged members of the press and the community.

Republicans may well win in two-weeks. They may indeed elect Trump to a second term and any media outlet saying otherwise is speculating at best.

2024, however, might be a different matter. If Democrats have finally won the culture wars- and indeed, being a Republican has never been considered more uncool or uncouth- Donald Trump was the Trojan Horse who ultimately delivered the Republican Party to its doom.

From 2024 on, Republicans might find themselves gradually going extinct. That is, unless you don’t believe in the power of the combined efforts of pop culture, the mainstream media, social media platforms, Hollywood, and Silicon Valley to shape the electorate in the coming years.

But, as of now, for better or worse, Donald Trump is now a completely sunk cost for the Republican Party. His Twitter personae, his bombastic manner, his hyperbole, his appeal to embarrassing right-wing political action groups: All past recovering. Like that Access Hollywood tape and the internet, Donald Trump is forever.

While this all may seem like great news to Democratic ears, it isn’t. After all, turnabout is fair play.

While the Republican Party must ultimately answer for Donald Trump in the weeks, months, and years to come, so too must the Democratic party grapple with its own unstable elements.

Any attempts that can be made to reduce the Republican Party’s credibility to the lowest common denominator can be used in a likewise fashion against Democrats, and just as easily.

Which leaves the Democratic Party facing slings and arrows of its own.

Outrageous fortune: Black Lives Matter and its attendant zeitgeist has just lifted Democratic chances at the ballot box and the donation box, just when Democrats needed it most; progressive fire-brands like Rep. Alexandria Ocasio-Cortez and her attendant Twitter army are extending the reach of the Democratic Party further than anyone could have dreamed 20-years ago; Sen. Bernie Sanders and the growing Democratic Socialist wing of the Democratic Party is a true grassroots movement, complete with as much momentum and enthusiasm as any Democrat could wish.

Sea of troubles: The attempts to defund and dismantle the police coupled with the rising crime in major Democratic cities; the most inane defenses of the recent rioting and looting; the CHAZ; the public Twitter clashes between progressives and moderates in the party; bitter primary challengesduring a tough election year; and a race to appeal to the furthest left at the constant risk of alienating moderates and the working-class.

Biden is innocuous enough to voters, a known quantity, a moderate Democrat. For this reason, Trump will turn the conversation away from Biden and towards the more extreme elements of progressivism every chance he gets. It is the same reason Democrats attack Donald Trump and not the more moderate members of the Republican Party- it’s much easier. It also makes for better television.

Which is why Biden will have to answer for the worst excesses of the party, including those of Democratic State Governors. Even if certain Democratic governors didn’t exceed their authority, they at least failed to properly explain decisions which seemed erratic, arbitrary, and overly punitive to voters.

Biden will have to suffer for the sake of California Governor Gavin Newsome, who recently advised Californians dining out to resume wearing their mask in between bites. That a state government would aspire to, or could ever dream of achieving, this level of control over the public is a vulnerable point.

Joe Biden will have to answer for New York Governor Andrew Cuomo and New York City Mayor Bill DeBlasio and their ill-advised COVID-19 crackdowns on the Jewish community- juxtaposed with their full-throated approval of massive social justice marches, and more recently, a women’s march protesting the confirmation hearing of Amy Coney Barrett.

With two weeks to go until the election, Democrats are confident because Donald Trump’s negatives are in the toilet. Well, of course they are. After four years of every major media outlet in the country calling Trump everything from a Russian agent to a White supremacist on a daily basis, where else would his negatives be?

But Trump’s approval ratings aren’t as low as they should be. In fact, Trump’s ratings aren’t that much lower than former President Obama’s during this point in the latter’s own reelection campaign.

Joe Biden’s negatives are where they are- untested. Biden’s approval rating is as yet untried by the shellacking it is about to endure over the next two weeks. And that shellacking will still be but a fraction of that to which the Trump campaign has become inured.

It is unfortunate that Joe Biden will have to answer for the most extreme elements of the Democratic Party. Trump will use every trick in the book, and invent a few new ones, to bring public attention to the left’s most unpopular ideas and extreme progressive positions, including the Green New Deal- or the Green New Dream, as House Speaker Nancy Pelosi called it- banning fracking, open borders, gun confiscation, federally funded political campaigns, and looting as a form of restorative justice.

Trump’s campaign has proven it can handle almost anything thrown at it.