Meat-eating environmentalists don’t have a leg of lamb to stand on. 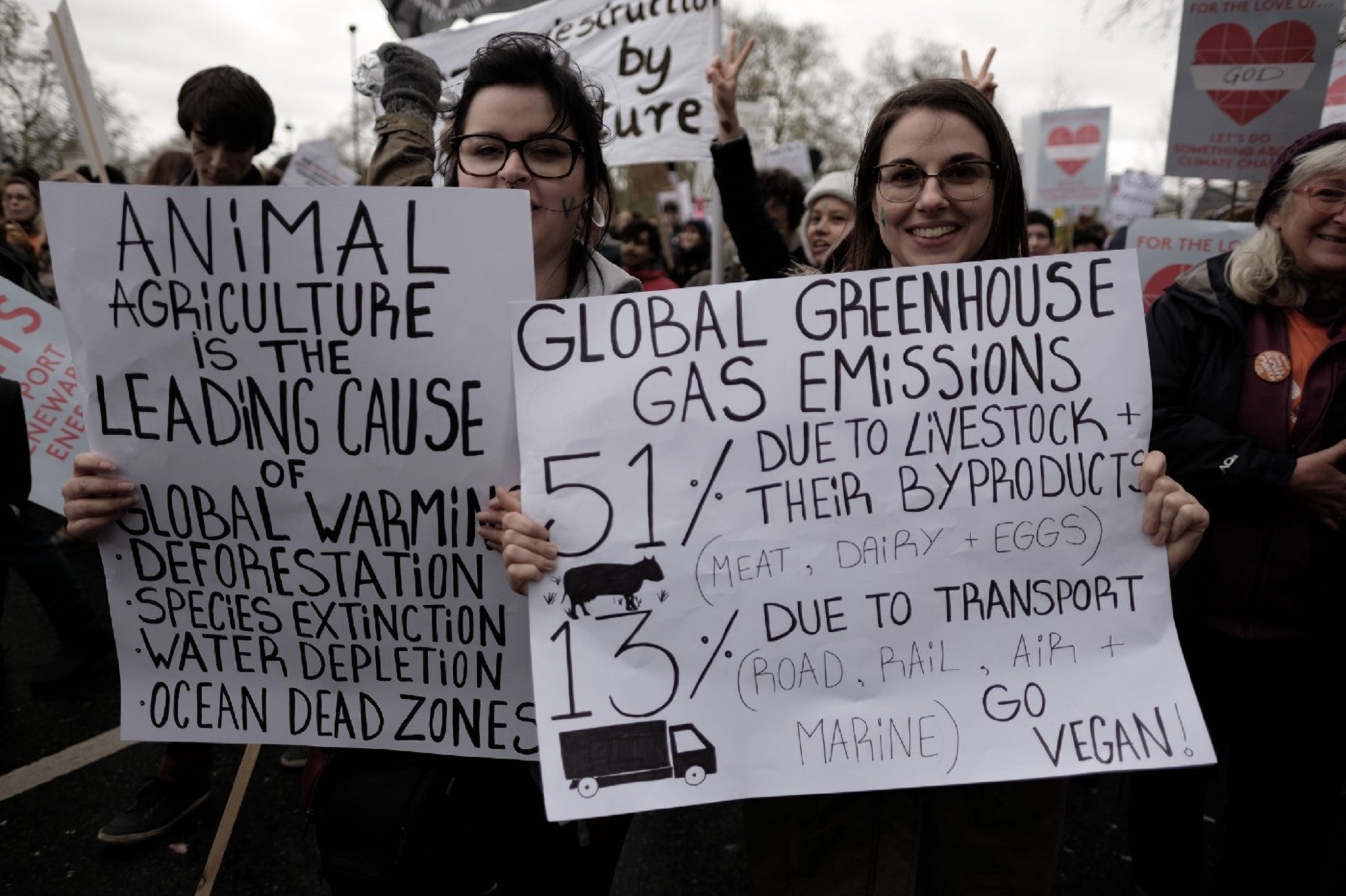 A 2015 climate change march in London held as part of a series of rallies worldwide prior to the COP21 Paris climate change talks. Activists want decisive action to limit the rise in average global temperature. (photo: Alisdare Hickson)

If say you care about the environment but are still eating animal food, you want everyone else to save the planet. But not you.

More than anyone else, Liberal Democrats couched in unpopular environmental positions must stop eating animal food.

Called into question this week about her own carbon-footprint inducing car-rides, staff burger-eating sessions and travel habits, Democratic ingenue Alexandria Ocasio-Cortez lashed back in what is quickly becoming her typical fashion; snark and ad hominem.

Everyone Else is Just Living in the World, Too AOC

She has a point. It isn’t fair; the U.S. is indeed currently set up for a mass transit system that very much involves fossil fuels.

Former Vice President Al Gore suffered from the same scrutiny of his personal habits. But Al Gore, like AOC after him, both had a very valid point about living in the world.

Gore and AOC want to change the system, making it possible for anyone to do anything without using fossil fuels. Environmental justice advocates have to achieve that in the current system, not in some future system in which a transit system without fossil fuels already exists, making creating one unnecessary.

So why are they still eating meat? 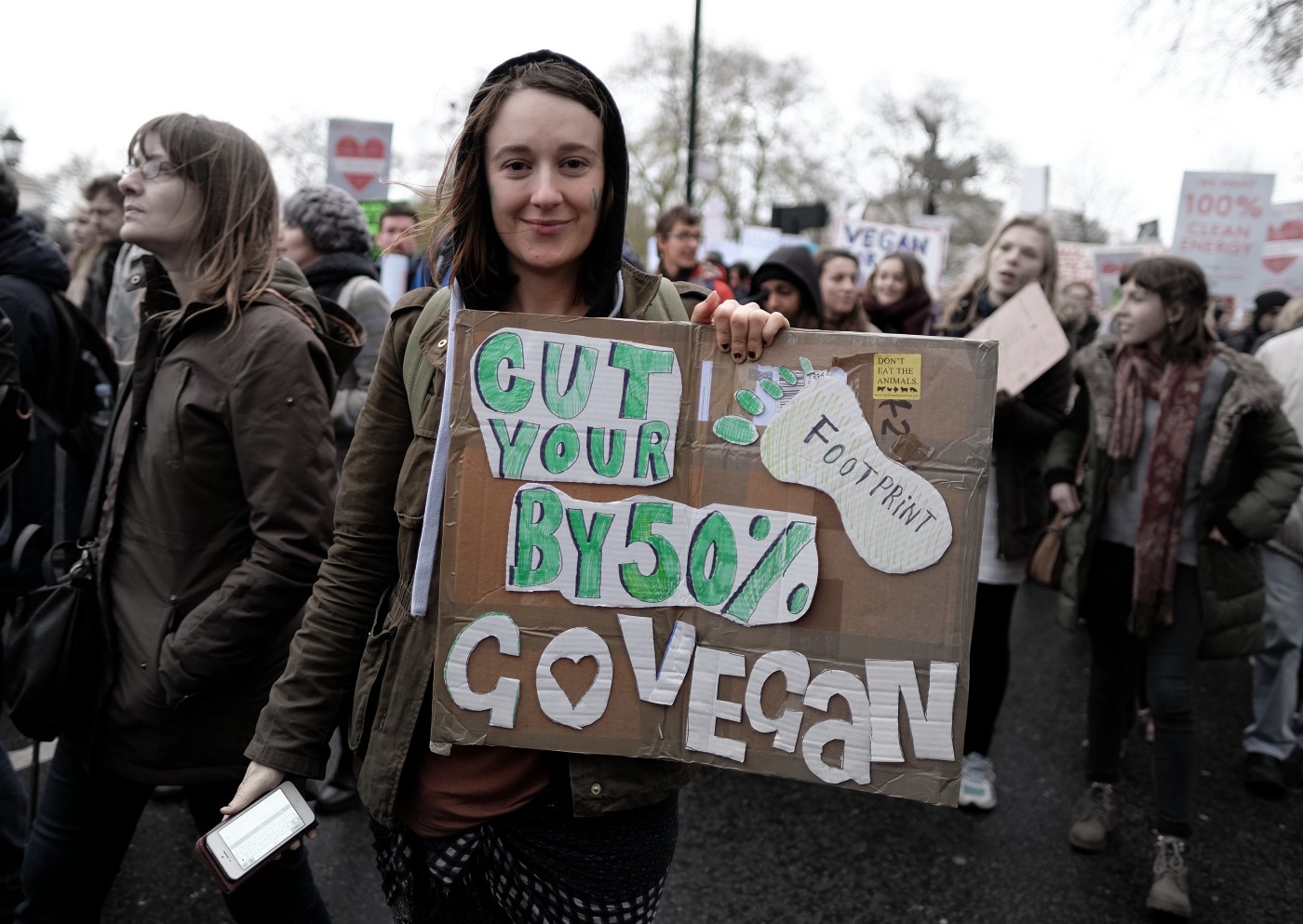 Why are they still eating meat when it is now not only possible, but easier than ever to avoid animal foods?

AOC definitely has the choice of giving up the unnecessary and purely indulgent luxury of animal foods. She has an opportunity to hire people willing to do the same. World leaders have a moral obligation to give up animal food, if they care about the planet.

If Alexandria Ocasio-Cortez Wants the Country to Think Big, the food all 330 million of us eat all day, every day is the largest issue of all. It is also the lowest hanging fruit; it might take you a good while to learn to navigate your life without fossil fuels, sell your car, figure out the public transportation system.

But you can stop eating animal food right now.

It is perfectly possible to exist in the U.S., right now, and easier than ever in fact, without eating animal foods.

Will it make you more popular?

Is the world at large set up to make this easy for you?

Will your family and friends be supportive of this decision?

No, and your mother will take it as a personal insult. (until she sees the light, just like you did.)

Will you have to change your habits?

Welcome to the party, pal.

Hypocrisy Hurts the Cause

If you’re living in the public eye, advocating vocally for the environment, and you are still eating meat and buying animal products, you aren’t going to be able to get away with it much longer.

We’re living in the information age; everyone has a high-quality video camera in their pocket and everyone wants to be internet famous. Also, everyone loves exposing a hypocrite. And no, they don’t see the irony in that.

The long-overdue discussion about the environment is coming to the forefront and advocates who aren’t even willing to change their own habits are doing more harm than good.

Why should anyone listen to you about saving the planet if you aren’t even willing to sub in a veggie burger no cheese?

Think it’s hard to give up cars, try living in the world and eschewing all animal foods and products.

The reasons are manifest and many:

Care about your health? Give up animal food.

Serious about your faith? Give up animal food.

Believe in science? Give up animal food.

Want to alleviate global poverty? Give up animal food.

Love animals? Give up animal food.

Tired of food companies using billion-dollar advertising campaigns to disproportionately target minorities and kids, manipulate and brainwash the American public and paying the government for the privilege?

Just kidding. Give up animal food.

Care about the planet?

You heard me; give up animal food.

Avoiding meat and dairy is ‘single biggest way’ to reduce your impact on Earth.

Faith Without Works is Not Faith

Because if you believed, if you truly believed that animal agriculture is imperiling the planet, and it is, you wouldn’t be able to eat another bite of animal.

If you knew what really went on in the animal agriculture industry, you would never eat another bite of animal, either.

Don’t even get me started on the appalling vanity of raising animals for fur in a world where children are starving to death, because then we will have to talk about leather, too.

Animal food is part of all of our cultures, our human history, our family and faith traditions; part of our celebrations and lamentations. In everything. I mean everything. And in the case of whey, absolutely everything.

Try going out to a restaurant and avoiding animal food. Welcome to my world; there’s always salad.

Instead of the ad hominem of attacking the credibility of the messenger, AOC should consider what is at the heart of the matter and change her habits.

What is their excuse? Eating meat like we’ve always* done is pleasurable and easy? Meat is everywhere and ubiquitous in our society? Meat has a historic pretext? It has (false) scientific evidence claiming humans need animal food to survive? Lies.

A cup of peas has 9 grams a protein. True.

This is the Information Age, if you haven’t already heard; study up on the latest in nutrition, don’t take my word for it. Just don’t take the word of the National Livestock and Meat Board when they sold you on “Beef, it’s what’s for dinner!”

And don’t call yourself an environmentalist if you are still indulging in animal foods.