Two sides of the same hateful coin. How can we combat the forces of extremism and mass violence in our society? 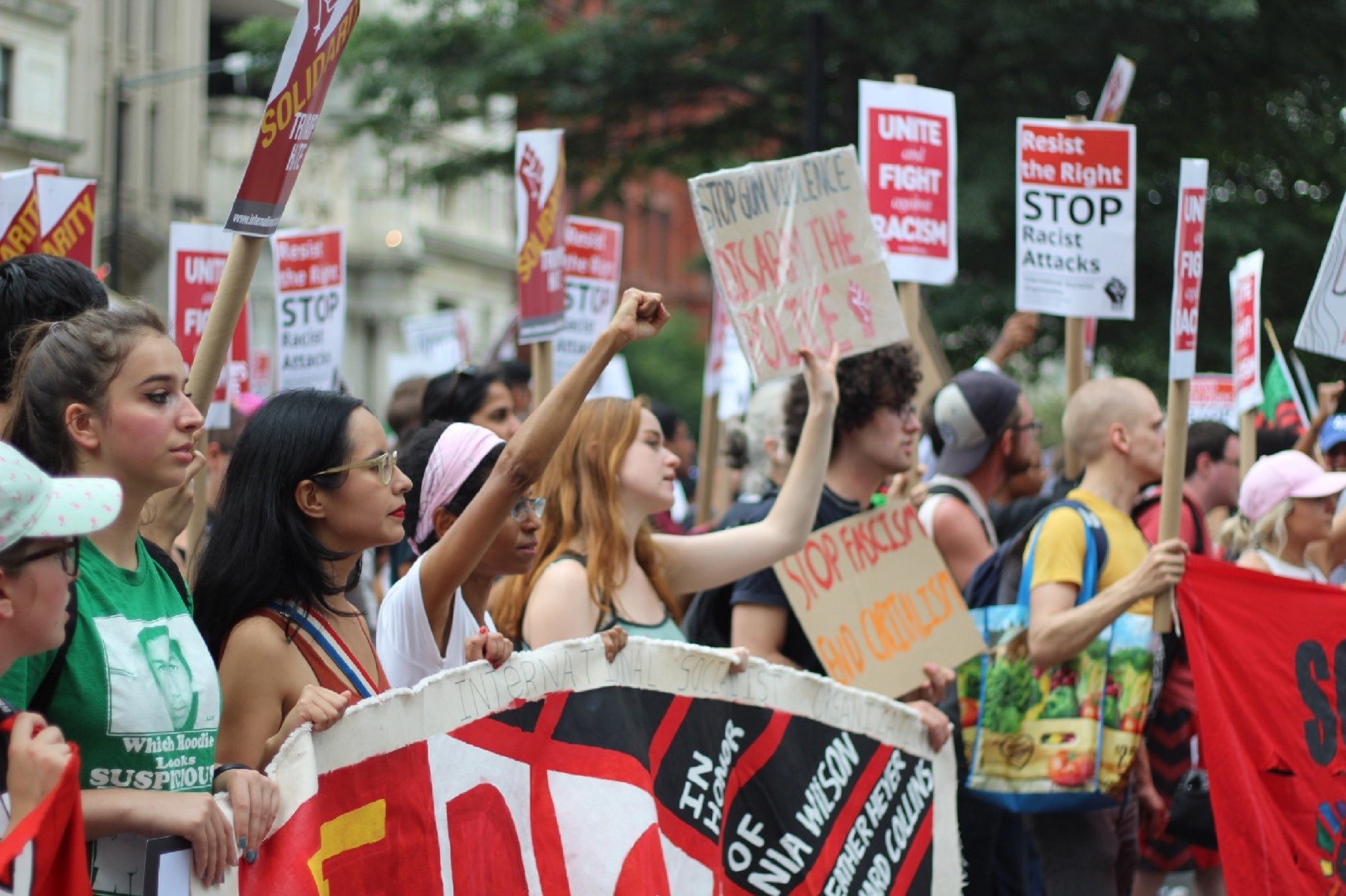 Protest in Washington, D.C. 2018. Photo by Melany Rochester on Unsplash

The nation watched in collective horror this weekend as news began to pour in about a Passover season shooting that took place in a California Synagogue on Saturday. A common reaction in the wake of a months-long spate of high-profile hate crimes focusing on peaceful religious people at prayer:

Please, God, not another one.

The details were all too familiar: A hateful manifesto, online radicalization, extremism focused this time on anti-Semitism; contrasted against tales of great heroism and sacrifice. 60-year old Lori Kaye gave her life to save her friend and Rabbi, jumping in front of a bullet meant for him.

Parents and grandparents shielded children with their own bodies. As always, the death toll would have been much higher were it not for a small miracle; this time, the shooter’s gun jammed.

Last week, a wave of Easter Sunday bombing attacks on Christians at churches in Sri Lanka claimed the lives of 290 people, some of them children. Jihadist extremists have been arrested in connection with the attack.

Just over a month ago, Christchurch. The deadly, well-planned Mosque attacks that claimed 50 lives left New Zealand to mourn those killed or injured and the hateful anti-Muslim sentiments behind the attacks.

Six months ago, the Tree of Life Synagogue in Pittsburgh lost 11 congregants when an armed gunman opened fire on innocent people in their place of worship. Anti-semitism was the motive behind the attack.

In October of 2018, a white man killed 2 people at a Kentucky grocery store after failing to gain entry to a local black church.

There have been others.

These attacks, coming on the heels of attacks like the 9 people killed at a black Charleston church by a white gunman in 2015 during a Bible study, seem to be, and often are, designed to cause maximum suffering and outrage.

Many of the perpetrators of these heinous crimes indicate their desire to incite a race war. In this way, their motivation is not unlike that of radicalized Islamist jihadis who want to incite a religious war.

A few attacks have been thwarted, giving police a treasure trove of chilling evidence and insight into crimes that might have been and people who went quietly about their lives without ever knowing how close they came.

A coast guard officer caught stockpiling weapons and planning a race war motivated by white nationalism; a Maryland man inspired by ISIS was caught planning to drive a car into pedestrians at the crowded and popular National Harbor tourist spot. A terror plot against Islamberg in upstate New York was foiled by authorities. A man was arrested with gasoline, lighter fluid and lighters in St. Patricks Cathedral in New York.

Just today, a mass casualty attack planned by a former U.S. soldier in Southern California was thwarted by the FBI. Inspired by ISIS, the perpetrator planned to attack synagogs and churches using his military training and combat skills in retaliation for Christchurch.

No two crimes are alike, no two perpetrators alike. And though the U.S. definitely needs to have some difficult conversations about gun control, no two weapons are alike. Although many terrorists share the same level of radical ideology, some outliers make classification of the group more difficult.

For instance, the white son of a local sheriff was arrested recently and charged with hate crimes for setting fire to a series of predominately black Churches. A closer look at the perpetrator reveals not white nationalism, but satanism, a penchant for death metal and death metal cults, as well as a commitment to anarchy, not racial purity.

Though the trial is far from complete and we must wait for all the evidence before the true motivations of the perpetrator become known, this suggests the possibility that he was attacking churches because they were churches, not because they were black churches.

Nor have places of worship been the sole focus of hate crime attacks. A man attempted to kill pedestrians he believed were Muslim on April 23, 2019 at a California intersection.

Hate crimes have gone up steadily for three years in a row, though much of the statistical change can be attributed to 1,000 more departments reporting to centralized FBI hate crimes statistics. According to the Southern Poverty Law Center, over 1,000 hate groups are currently operating in the U.S.

Since stoking Islamaphobia around the world is one of the stated goals of ISIS, it is not surprising to learn it has had such an effect on white nationalists. The two groups have more in common than you might imagine.

The ISIS method of suppression is so successful, it has inspired white nationalist movements to adopt the model. Jihadists and white nationalists even use very similar social media strategies to radicalize and incite violence.

Religious or racially inspired hate crimes and terrorist attacks represent a fundamental threat to freedom, peace and democracy in that they are not simply meant to take lives.

They are meant to inspire others to take lives as well.

These heinous crimes are inflicted on society in order to provoke an even more violent response. Whatever we do, we cannot give the terrorists what they want. We cannot let these enemies divide us. Whatever the killer thinks is the reason for his actions isn’t as important as denying him his ultimate goal:

Sowing fear and mistrust between peaceful and peace-loving fellow religionists.

If we cannot allow them to divide us, we must allow them to unite us. American Muslims, Jews and Christians must band together against the forces of antisemitism, islamophobia and radicalization trying to tear us apart.

The only way we can survive this is together.