Is the Stellar June Jobs Report Really a Ray of Sunshine?

Some economic indicators are flashing hopeful signs of a rebound. Can it last? 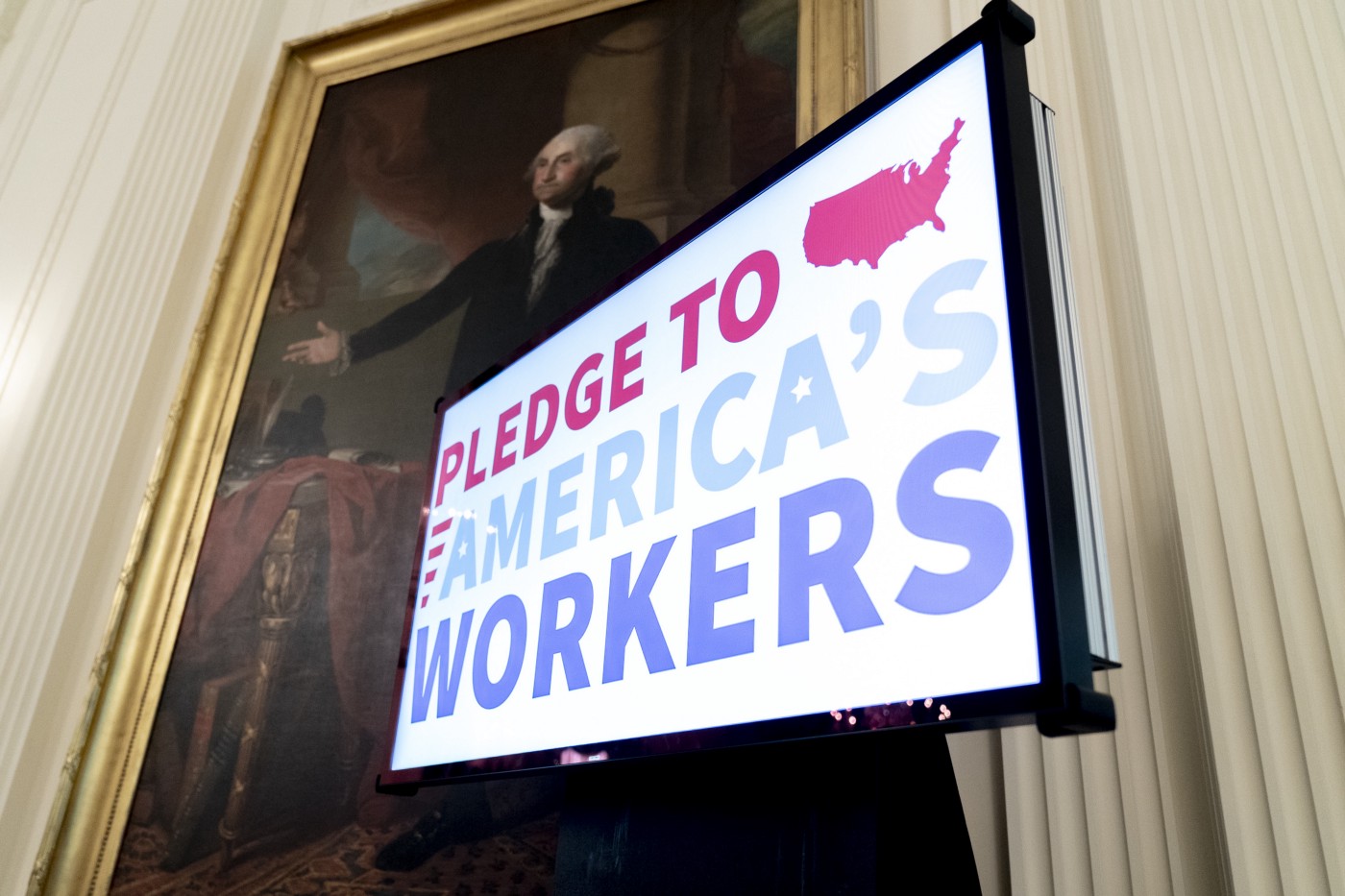 A video display announces a Pledge to America’s Workers under the painting of George Washington during the American Workforce policy advisory board meeting Friday, June 26, 2020, in the East Room of the White House. (Official White House Photo by Shealah Craighead)

During his brief speech, Trump touted record breaking jobs numbers for the second month in a row, describing the falling U.S. unemployment rates as “spectacular news for American workers and American families.”

Is it too good to be true?

In May, the U.S. did indeed put up record breaking jobs numbers; the Trump administration can correctly boast that 2.7 million jobs were added to the U.S. economy, the largest monthly jobs gain in history.

Trump can also correctly lay claim to smashing the expectations of economists, which have verged on the apocalyptic as the economy has worked to recover from periods of extended shut-downs.

The unemployment rate fell in May to 13.3%, from 14.7%, instead of rising to near 20%, as predicted by prominent economists like James Bullard, President of the St. Louis Federal Reserve.

The U.S. economy added 4.8 million jobs in June, according to data released by the Labor Department. This number exceeds the expectations of economic forecasters by 1.7 millions jobs. Economists surveyed by Refinitivhad expected the report to show a 12.3 percent unemployment rate and an addition of only 3 million jobs.

That the U.S. economy has added 7.5 million jobs in the last two months alone is excellent news for American workers. It is also exceptional news for small businesses- who have been teetering on the brink of collapse since the Covid-19 outbreak began.

The unemployment rate has lowered by two percentage points and is now down to about 11.1%.

President Trump touted these “historic numbers,” and also pointed to a sharp drop in the unemployment rate for African-Americans from 16.8% to 15.4%: “Today’s announcement proves that our economy is roaring back. It’s coming back extremely strong.”

2.1 million jobs were created in leisure and hospitality, accounting for the biggest bulk of jobs created. Approximately 1.48 million of those jobs were added by food services and drinking places- one of the sectors hardest hit by the pandemic.

President Trump predicted that “manufacturing looks like it’s ready to really take off,” and attributed the addition of these jobs to his trade policy and insistence to bring manufacturing back to the United States.

The jobs report further revealed an increase of 700,000 jobs for African-Americans, and an increase of 1.5 millions jobs for Hispanic-Americans. In addition, 3 million more women were employed in the month of June.

The stock market has also been showing signs of significant improvement this week. The Dow Jones increased by an encouraging 18-percent, the largest gains in 20-years.

The jobless rate is still up 7.6 percentage points compared to the start of the year, when it sat at a 50 year low.

And ominously, this pleasant announcement about job gains in June came even as new Covid-19 cases in the United States surpassed 50,000 for the first time, reaching a record number of infections in a single day.

Arizona, Florida, Texas and California are all states that have seen a spike in infections. Some states such as Florida have already begun to roll-back on easing restrictions. If the outbreak re-intensifies, economists have warned the costs to the economy could be dire.

Trump, for his part, has reiterated his campaign-promise predictions that the economy will come roaring back, despite the surge in Covid-19 cases. “We have some areas where we’re putting out the flames of the fires and that’s working out well,” Trump said. “We’re getting rid of the flame,” he added.

Andrew Chamberlain, chief economist at Glassdoor told Fox News that “With surging COVID-19 cases hitting new highs in the past week, rough waters are surely ahead for the economy in the coming months as a second wave could again shutter millions of American small businesses and put a freeze on hiring.”

Still, Chamberlain allowed that the better-than-expected report provided a “powerful signal of how swiftly U.S. job growth can bounce back and how rapidly businesses can reopen once the nation finally brings the coronavirus under control — a reason for optimism in coming months.”

Many doubt the president’s ability to keep his promises on bringing unemployment down the United States, especially given the unpredictable nature of the pandemic.

Prior to the Covid-19 outbreak, however, the U.S. had been experiencing historic economic growth over the past few years. Over the past three years, the U.S. has added over 7 million jobs and reached the nation’s lowest unemployment rate in 50-years.

Additionally, before the pandemic the Trump Administration oversaw the lowest African-American unemployment rate recorded in US history. The lowest unemployment rates on record were matched or set for Hispanic-Americans, Asian-Americans, American-Indians and Alaskan Natives, veterans, those without a high school degree, and persons with disabilities.