Is Insult-Comedy a Casualty of the Pop Culture War?

Saturday Night Live has a lot of nerve sermonizing: How pop culture made us all so mean. 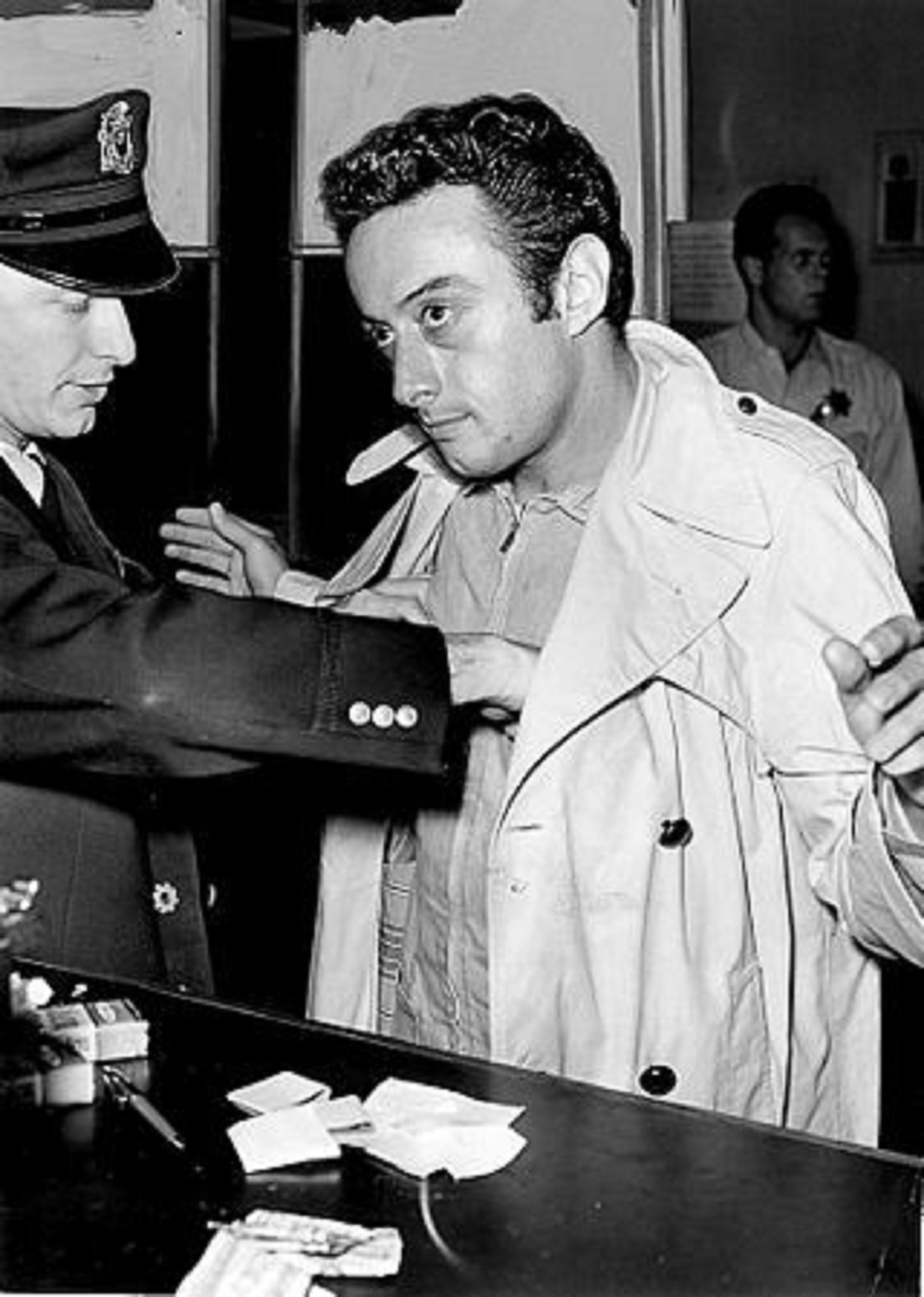 Jewish comedian Lenny Bruce being arrested in October 1961. Bruce was routinely arrested for jokes about the Pope, among other topics controversial at the time. (photo: Examiner Press photo)

Comedian Kevin Hart is out as an Oscars host because of some old tweets that, while socially acceptable at the time, have not aged well in a culture more and more concerned with not giving offense.

Louis CK, once the self-depreciating comic darling of primetime, already in trouble in the post-#MeToo era, is in trouble again over jokes he made recently about survivors of the Parkland school shooting and gender-identity.

They aren’t alone: 10 famous comedians on how political correctness is killing comedy: “We are addicted to the rush of being offended”. Even squeakily-clean “Daily Show” host Trevor Noah has come under fire.

While insult-comedy certainly isn’t for everyone, comics often have to “cross the line” as they work out the kinks in their material, using audience reactions to judge if something is “too far” and adapting as they go. But how did everyone come to like insult comedy in the first place? Why do we like to laugh and then groan?

How did we all get so mean? Why do we like to have our chops busted, and hear other people getting theirs?

The answer is Hollywood, and its changing faster than comedy can keep up.

Don’t Say What I Say, Don’t Do What I Do

Things are changing in Hollywood, and so goes America.

Is it life imitating art or art imitating life imitating art? Regardless, times are changing and attitudes are catching up. And some of your favorite old movies, comedy specials and tv shows, even those made only 5-years ago haven’t aged well.

Some are even hard to watch now, as the national consciousness is collectively waking to the reality that other people exist and have feelings.

Hollywood can’t just slapstick a strait man into a dress and call it a movie anymore.

Or rather, they can’t just keep putting a man in a dress and calling it a comedy, because just now they’re busy yelling at everyone for laughing at it.

Stereotypical jokes about people who identify LGBTQ, and LGBTQ characters that are more like caricatures, are over and out now, but it hasn’t been long since they left the mainstream. Even once groundbreaking shows like “Will & Grace,” are wearing to watch now, with gay and lesbian characters relegated to comic relief and narrow comedy tropes.

Sexist jokes aren’t funny; I’m not sure how Howard Stern still has a job honestly. Prison rape jokes aren’t really all that funny, not that they ever were. Rape jokes about the casting couch have gone the way of Harvey Weinstein and Bill Cosby, good riddance. Jokes about R. Kelly definitely aren’t funny. The wall protecting powerful artists and Hollywood moguls is crumbling, has crumbled.

Seeing behind it is why it is somewhat hard to accept politically-correct education from a cabal of wealthy people so deeply entrenched with sexism, toxic masculinity, racism and bigotry that, as is becoming increasingly clear, they’ve protected the worst within their midst for decades. Some are complicit in concealing crimes; some merely looked the other way.

Top actors still star in Woody Allen movies; corporations still use Michael Jackson’s music in their commercials. Roman Polanski remains a part of Hollywood, though he can’t set foot on U.S. soil due to outstanding charges he has yet to face for well-publicized crimes he committed against underage girls in the 1970's.

It is also hard to accept correction from an industry that has perpetrated every sexist, machismo-glorifying, racist stereotype and trite sexual-orientation comedy trope known to mankind.

Hard to be preached to now about inclusivity by the crack comedy writers at Saturday Night Live who gave the world “It’s Pat!” only a few short years ago.

What is a society aspiring to be more peaceful and inclusive do with an uncomfortable truth:

We think rudeness is funny. Why?

We’re rude because a generation of people in the U.S. developed their sense of humor watching snarky, yet lovably underdog, tv antiheroes insulting friends too stupid to understand innuendo for the benefit of a studio audience.

Characters on tv and in movies say rude and sarcastic, even socially unacceptable, things to their friends, families, coworkers, partners, kids, loved ones, all the time.

Thing is, we don’t have studio audiences in real life

If your partner comes home exhausted from a long day at work, sighs deeply and asks you how they look, and you reply with a snarky quip about hiring extras for the “Walking Dead”, a studio audience might have laughed. Your real-life partner, less so.

Stand-up is even worse: From Eddie Murphy’s “Raw,” in the 80’s, to the “Kings of Comedy” in the 90's, to tv’s recent comedy “The Last Comic Standing,” insult-comedy is everywhere.

I understand why we’ve changed, and I’m glad; but we have to acknowledge how we got this way in the first place. It is hypocritical of Hollywood to avoid taking responsibility for the social ills of 2019.

For some people, the first time they ever saw a gender nonbinary person was on SNL. Making fun of and/or vilifying any man who prefers female clothing has been a comedy standby since long before Jack Lemmon and Tony Curtis dressed in drag to impress Marilyn Monroe in “Some Like It Hot.” And long after.

That Stuff Wasn’t Funny to Begin With

But nothing much is.

What redeemed old episodes of Saturday Night Live was that they made fun of everyone equally.

A stereo-typical “crazy homeless man” makes it into someone’s living room to do a sales pitch. An unselfconscious obese man out-dances Patrick Swayze for a male stripper job. An old, religious white church-lady pokes fun at the late-night televangelist set. And yes, a gender nonbinary person, years before gender nonbinary person was part of the cultural vernacular.

Gender nonbinary people probably didn’t like the jokes much then, as now; but homeless people, the morbidly obese and the elderly don’t like being the butt of someone’s bad joke either.

Consider the desperate plight of millions of homeless people in America; the isolation, depression, discrimination and terrible health disabilities faced by the significantly obese; the lack of sufficient public resources to care for society’s elderly and the role private organizations, like churches, play in making up for it.

Not to mention the discrimination and persecution that gender nonbinary, gender nonconforming people face everyday in America.

None of it is really all that funny. At all. But is comedy what pushed us over the line in the first place? Is comedy why we’re all so worried about being offensive now?

Comedy may not have started the conversation, but using outlandish examples to poke fun raised social consciousness: Would a 1970’s white audience listening to Richard Pryor cracking wise about racism in America and relating his black experience be more likely to consider their own attitudes about race?

Can we be funny and respectful of everyone? Is there anything redeeming about insult-comedy?

Obviously, making fun of people different from yourself isn’t appropriate. What about making fun of yourself, and by extension, people like you?

The people you know, your family and friends and those closest to you, do and say silly, strange, crazy, funny things all the time. Can we laugh about it, and still be sensitive to each other’s feelings?

Lenny Bruce teaching a laughing, mixed-group audience to tell the difference between “Jewish” and “Goyish”, seems harmless enough. Is it?

In the uproarious comedy special “The Queens of Comedy” my favorite joke was the one about the difference between a black mother and white mother responding to their child’s unfiltered opinion that “mommy’s fat!”.

Why is this so funny? Child abuse certainly isn’t funny: It might seem funny when Homer Simpson chokes original bad-kid Bart Simpson until his tongue protrudes on tv, but if you saw a father do that to his child on the street, you’d call the police.

Is it possible that mixed-audiences like these jokes because they don’t highlight our differences, but highlight how much we are the same?

Lenny Bruce’s jokes about his Jewish family build a bridge across a socioeconomic, racial and religious divide.

“Hey, his family is crazy, too. He sees that everything is messed up, and he can laugh about it. So can I.”

“Wow, parents of any race sometimes get so fed up with their misbehaving kids that they might be forced to make a joke about child abuse so they don’t break down and cry at how difficult it is to be a parent.”

It is not real; it’s a joke about something real, an exaggeration, a caricature, a shared bonding experience over how miserable everything really is, how hard life is really, and how all we have is one another.

What is funny when you really think about it all? Not a great deal, honestly. The world is full of suffering and injustice. Impermanence and the great unknown of death are deeply troubling, and most of what isn’t terrible in our lives is just plain monotonous like dishes, taxes and television commercials.

There are a few brief moments of happiness and joy, which must be savored. Maybe the PC crowd is right; there is absolutely nothing funny about any of it.